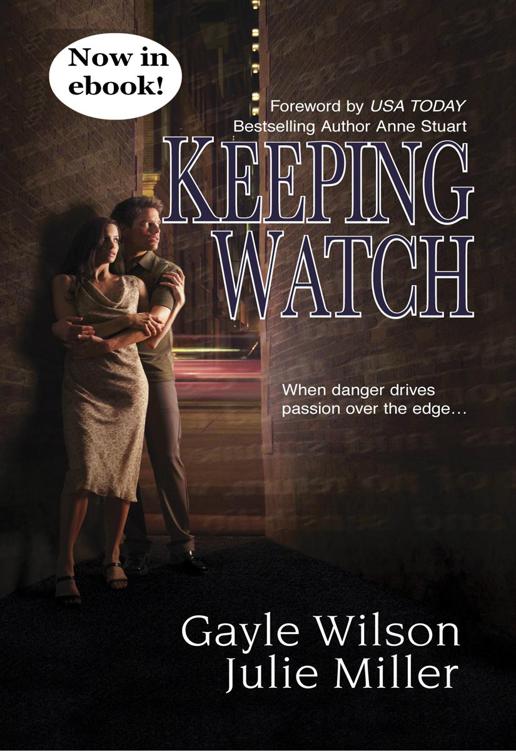 Heart of the Night

Heart of the Night

In a darkened room in Atlanta, Georgia, Thorne Barrington put the phone back in its cradle. It took a conscious effort to force his fingers to unclench from around the receiver. He raised his left hand to run it tiredly through thick black hair, a habit left from childhood, used then to subdue its stubborn tendency to curl. He became aware that he still wore the latex gloves with which he had handled the letter.

He stripped them off and laid them on the table beside the telephone. He shivered suddenly, although, even with the efficiency of central air, the brutal heat of the Georgia summer had invaded the house. Finally he closed his eyes. There was nothing to do now except wait. He had had a lot of experience waiting during the last three years. As he had endured the rest, he would endure this, but the waiting was always so hard.

I
N AN OFFICE
a thousand miles away, Hall Draper also put a phone back in its cradle and sat for a moment reliving the triumph of last night’s game. They were in the play-offs, and Trent had gone two for three and then made a diving grab of a shot down the middle that no one had any right to expect a ten-year-old to catch. Tonight would be the test. The Sox were the best in the league, and everyone knew it.

Trent was pitching, and although Hall was nervous as a cat, he knew the boy wouldn’t be. Trent would be keyed up, looking forward to the game, the challenge, but he’d be okay with a loss. It would give him more time for other things. It was a long season, and the kids were always glad when it was over. It was the adults who suffered the letdown, who cared how it all turned out, who held the bitterness of defeat into the coolness of fall.

Hall had often vowed he’d never be one of those Little-League parents, but that was before it had been his kid up at bat,
his
son on the mound. The adrenaline started flooding, no matter what he told himself. Jackie wouldn’t even go to the games anymore. It made her too nervous. He just hoped for a win so he could sleep tonight.

“Mail,” Claudia sang out as she came through the door that separated his office from the small reception area. An eternally cheerful woman, a little heavy and beyond middle age, his secretary had previously worked for an attorney who had just retired. Hall sometimes thought she knew more about running a practice than he did.

He had come to it late, had postponed the dream because of a lack of money and an early marriage. Trent had arrived before they were on their feet financially, and Hall had worked days and attended classes at night. It had taken far longer than it should have before he had his degree and had passed the bar, and it had been a struggle since. He hadn’t attracted the interest of any of the big firms, his résumé unimpressive by his own standards. Even now, they were just barely getting by. Jackie was still working, but she didn’t seem to mind.

Life was good, he thought, a little surprised by the introspection. He was not by nature an introspective man.

“A couple of remittances, a bill and a package. You want me to open it?” Claudia asked, a matter of form, they both knew. It was always slow enough that even the mail was an event in his day.

“Who’s it from?” he asked, using his thumbnail to split one of the envelopes. It was a check from a client. A dollar-down-and-a-dollar-a-week law practice—he knew that’s all he had. But at least this one was still sending his dollar.

Claudia turned the package, pretending that she hadn’t already read the return address.

“Thornedyke Barrington,” she told him. “It’s marked personal. You know him?”

“If I do, I can’t remember where. It sounds familiar. Just leave it, and I’ll get to it later.”

“You remember I’m taking Mother to the doctor? I’m taking the rest of the day off. I swear I dread it. That woman wears me out. You’ll be okay, won’t you?”

“Unless we get a rush. What are the chances of that, Claudia, do you think?”

They smiled at each other.

“Good luck tonight,” the secretary said, turning to retrace her steps to the door. “Tell Trent I said to knock ’em dead.”

“I don’t think that’s what you tell a pitcher—especially in Little League, but I’ll try to convey the thought. Be careful on the way home from the doctor’s.”

“I will. See you tomorrow.”

The door closed behind her, and Hall’s thoughts moved back to the game. He thought about calling Jackie and asking her to run out and pick up some Gatorade. He decided finally that he could stop on the way home and then she wouldn’t have to get out of the house in this heat.

He got up and walked to the windows behind his desk. He lifted one slat of the blind that was closed against the summer sun and looked out on the deserted street in front of his office. It was too hot for anyone to be out if they didn’t have to.

He turned back, and the package caught his eye. Thornedyke Barrington, he remembered, but he turned it around so the address faced him and read it for himself. He had heard the name before, but for the life of him he couldn’t remember where. He’d never been to Atlanta. Probably something to do with a client.

He took his old Boy Scout knife out of his top drawer and slipped it under the string that bound the brown-paper-wrapped box. He pulled the blade up sharply against the twine and cut through, the string releasing with a small twang. He turned the package over, his mind again slipping away to the familiar scene under the lights of the ballpark. He slid his thumb under the taped triangular flaps on the back and lifted the paper away from the box.

He had wadded the wrappings in one hand before he thought better of it. He probably should save the return address, he decided. He straightened out the crumpled sheet and laid it carefully on his desk. He put both hands on the box, one on each side, and the lid slid upward in one smooth motion.

As soon as the top had cleared the upright sides, just as the maker of the bomb had intended, the world exploded before Hall Draper’s eyes. He was dead before his body slammed into the chair behind the desk and then fell heavily to lie on the blood-splattered floor of his office.

“Your boy did it again.”

“My boy?” Kate August questioned, her blue eyes flicking up to meet her editor’s as she opened the bottom drawer of her desk to put her purse back in its accustomed place. She’d just returned from a long and pleasant lunch with a college friend, and she had not yet refocused her mind on the newsroom. She didn’t understand the reference. At the moment she could not, in any context, be accused of having a “boy.”

She bent to fumble awkwardly under the desk, one-handed, trying to locate the comfortable shoes she’d worn this morning. The black heels she was now wearing, which she had put on for her luncheon appointment, had been carried in to work in a Rich’s bag. There was something about meeting a friend you hadn’t seen in a while, no matter how old or how good a friend, which demanded a little extra effort, a conscious decision to mask the evidence of years passing and the concessions that had inevitably been made to their passage.

So Kate had put her long, sun-streaked chestnut hair up today, had worn a little more makeup than usual and her best suit, but all the way back from the restaurant she had thought only that she couldn’t wait to get the shoes off, no matter what they did for her ankles.

Kate’s hand, which had been searching in the black hole where her flats had apparently disappeared, froze. Her cheek still resting on the metal surface of the desktop, she allowed herself a deep breath and then straightened to meet Lew’s eyes.

“Damn,” she said softly. “It’s not near time…” The comment trailed. There was no point in voicing the obvious. The consensus had been that the mail bomber, whom the press had begun calling Jack the Tripper almost two years ago, was working according to a careful schedule. Twice a year some unsuspecting victim opened his mail and died.

Doctor, lawyer, Indian chief.
Ridiculously, the children’s rhyme ran through Kate’s mind, which was still trying to deal with the shock of Lew’s announcement. That was one of the many puzzles of this story she’d been working on the last four months. There seemed to be no connection between the recipients of Jack’s mail bombs, at least none anyone had yet figured out. Only his timing had been consistent. Until now.

Shoes forgotten, her fingers quickly lifted above the edge of the desk to flip backward through the revolving calendar. She was right. It had been late March, a little more than three months ago. She didn’t need the notation to remember where. Austin, Texas. She had gone there. With the help of Detective Byron Kahler, her “in” with the Atlanta police, she even had been allowed to view the carnage in the boarding house where the device had exploded, killing an old man. Such a
nice
old man, everyone had told her. She closed her mind to the images from that devastated room, denying their impact.

“A small-time lawyer in Tucson. A guy named Hall Draper.”

Kate felt a small surge of excitement. “A lawyer? Like Barrington.”

She couldn’t remember exactly when the press had made the connection between the first bombing here in Atlanta and the others. The police had not originally discussed the Barrington case in conjunction with the rest—because, of course, there was one obvious and very important difference. Jack the Tripper had screwed up. One intended target, an Atlanta judge named Thornedyke Barrington, had survived.

The Barringtons had always been prominent in civic affairs, cultured, educated at private Southern schools or the Ivy League. In Thorne Barrington’s case it had been Tulane and then on to Harvard Law, followed by a return to Atlanta where he’d gone to work in the DA’s office. And why not? Kate thought. Heir to one of Georgia’s largest fortunes, he didn’t need the income from some Peachtree partnership.

The surprising thing had been how good he was. A lot of people in Atlanta had waited for Thorne Barrington to fall flat on his face, believing his academic successes had resulted from his father’s generous contributions to the schools he’d attended. Smart, dedicated, and realistic, he had proved the doubters wrong, and the most remarkable thing was that he hadn’t even seemed to be aware he needed to.

Barrington had risen quickly through a stream of successful convictions, and when a judgeship had come open, his record and family name had secured it. If his daddy had used his influence, no one thought at that point to question the rightness of its use. Thorne Barrington was already being mentioned for the state Supreme Court when Jack’s package arrived.

“There’s no justification in linking this guy and Barrington,” Lew said. “Maybe if all Jack’s victims were involved with the law—”

“Barrington was a judge; this guy in Tucson’s a lawyer. It seems a pretty obvious connection to me. Don’t try to tell me that you didn’t at least think about it.”