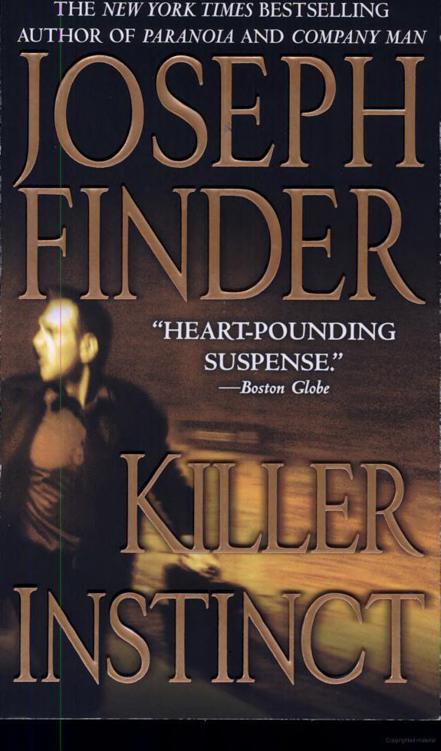 Jason Steadman is a thirty-year-old sales executive living in Boston and working for an electronics giant, a competitor to Sony and Panasonic. He's a witty, charismatic guy who's well liked at the office, but he lacks the "killer instinct" necessary to move up the corporate ladder. To the chagrin of his ambitious wife, it looks as if his career has hit a ceiling. Jasons been sidelined. But all that will change one evening when Jason meets Kurt Semko, a former Special Forces officer just back from Iraq. Looking for a decent pitcher for the company softball team, Jason gets Kurt, who was once drafted by the majors, a job in Corporate Security. Soon, good things start to happen for Jason -- and bad things start to happen to Jasons rivals. His career suddenly takes off. He's an overnight success. Only too late does Jason discover that his friend Kurt has been secretly paving his path to the top by the most "efficient" -- and ruthless -- means available. After all, Kurt says, "Business is war, right?" But when Jason tries to put a stop to it, he finds that his new best friend has become the most dangerous enemy imaginable. And now it's far more than just his career that lies in the balance. A riveting tale of ambition, intrigue, and the price of success, Killer Instinct is Joseph Finder at his best.

Red Carpet: The Connection Between the Kremlin and America’s Most Powerful Businessmen

For Emma, my baseball fanatic

When the student is ready, the Master appears.

I’d never fired a gun before.

In fact, before this evening, I’d never even held one.

It was a Colt .45 semiautomatic pistol, and it felt heavy and awkward in my hand. Its grip was rough. I couldn’t steady the weapon. Still, I was close enough to him now to put a bullet in the center of his chest. If I didn’t—if I didn’t kill him now—there was no question he’d kill me. I was no match for him, and we both knew it.

It was the middle of the night, and we were the only ones on the twentieth floor, probably in the entire building. Outside my office the maze of cubicles was dark. All those people who worked with me and for me, I’d probably never see again.

My hand was trembling, but I squeezed the trigger.

Just a few days ago, if you looked at me you’d see a successful corporate executive. A guy with a high-powered job married to a beautiful woman. A man for whom everything seemed to be going perfectly.

My idea of danger had been going to bed without brushing my teeth.

Now I didn’t think I was going to live to see the morning.

So where did I go wrong? How far back did it go? First grade, when I hit that kid Sean Herlihy with a snowball? Fourth grade, when I was picked third to last for the kickball team?

No, I can tell you exactly when it began.

It was ten months ago.

The Acura went into a ditch because I was trying to do too many things at once. Radiohead’s “The Bends” was playing, loud, while I was driving home, too fast, since I was late as usual. Left hand on the wheel, while with my right hand I was thumbing my BlackBerry for e-mails, hoping I’d finally nailed a deal with a huge new customer. Most of the e-mails were blowback from the departure of our divisional vice president, Crawford, who’d just jumped ship to Sony. Then my cell phone rang. I dropped the BlackBerry on the car seat and grabbed the cell.

I knew from the ring that it was my wife, Kate, so I didn’t bother to turn down the music—I figured she was just calling to find out when I’d be home from work so she could get dinner ready. She’d been on a tofu kick the last few months—tofu and brown rice and kale, stuff like that. It had to be really good for you, since it tasted so bad. But I’d never tell her so.

That wasn’t why she was calling, though. I could tell right away from Kate’s voice that she’d been crying, and even before she said anything I knew why.

“DiMarco called,” she said. DiMarco was our doctor at Boston IVF who’d been trying to get Kate pregnant for the last two years or so. I didn’t have high hopes, plus I didn’t personally know anyone who’d ever made a baby in a test tube, so I was dubious about the whole process. I figured high tech should be for flat-screen plasma monitors, not making babies. Even so, it felt like I’d been punched in the stomach.

But the worst thing was what it would do to Kate. She was crazy enough these days from the hormone injections. This would send her over the edge.

“They’re not going to let us keep trying forever, you know,” she said. “All they care about is their numbers, and we’re bringing them down.”

“Katie, it’s only our third try with the IVF stuff. It’s like a ten percent chance or something per cycle anyway, right? We’ll keep at it, babe. That’s all.”

“The point is, what are we going to do if this doesn’t work?” Kate’s voice got all high and choked, made my heart squeeze. “Go to California, do the donor egg thing? I can’t go through that. Adopt? Jason, I can barely hear you.”

Adoption was fine with me. Or not. But I’m not totally clueless, so instead I focused on turning down the music. There’s some little button on the steering wheel that I’ve never figured out how to use, so with the thumb of my driving hand I started pushing buttons, but instead the volume increased until Radiohead was blaring.

“Kate,” I said, but just then I realized that the car had veered onto the shoulder and then off the road. I dropped the phone, grabbed the wheel with both hands, cut it hard, but too late.

There was a loud ka-chunk. I spun the steering wheel, slammed on the brakes.

A sickening metallic crunch. I was jolted forward, thrown against the wheel, then backwards. Suddenly the car was canting all the way down to one side. The engine was racing, the wheels spinning in midair.

I knew right away I wasn’t hurt seriously, but I might have bruised a couple of ribs slightly. It’s funny: I immediately started thinking of those old black-and-white driver-ed shock movies they used to show in the fifties and sixties with lurid titles like
The Last Prom
and
Mechanized Death
, from the days when all cops had crew cuts and wore huge-brimmed Canadian Mountie hats. A guy in my college frat had a videotape of these educational snuff flicks. Watching them could scare the bejeezus out of you. I couldn’t believe anyone learning to drive back then could see
The Last Prom
and still be willing to get behind the wheel.

I turned the key, shut off the music, and sat there for a couple of seconds in silence before I picked the cell phone off the floor of the car to call Triple A.

But the line was still open, and I could hear Kate screaming.

“Jason, are you all right?” She was freaking out. “What
happened
?”

Forty-five minutes later a tow truck pulled up, a bright red truck,
M.E. WALSH TOW
painted on the side panel. The driver walked over to me, holding a metal clipboard. He was a tall, broad-shouldered guy with a scruffy goatee, wearing a bandana on his head knotted at the back and long gray-flecked brown hair in a kind of mullet. He was wearing a black leather Harley-Davidson jacket.

“Well, that sucks,” the dude said.

“Thanks for coming,” I said.

“No worries,” Harley said. “Let me guess. You were talking on your cell phone.”

I blinked, hesitated for a microsecond before I said sheepishly, “Yeah.”

“Damn things are a menace.”

“Yeah, totally,” I said. Like I could survive without my cell phone. But he didn’t exactly seem to be a cell phone kind of guy. He drove a tow truck and a motorcycle. Probably had a CB radio in there along with his Red Man chewing tobacco and Allman Brothers CDs. And a roll of toilet paper in the glove compartment. Kind of guy who mows his lawn and finds a car. Who thinks the last four words of the national anthem are “Gentlemen, start your engines.”

Jenny's War by Margaret Dickinson
August Is a Wicked Month by Edna O'Brien
Ten Years in the Tub by Nick Hornby
The Lesson by Welch, Virginia
The Hundred Days by Patrick O'Brian
Highland Vampire by Deborah Raleigh, Adrienne Basso, Hannah Howell
Future Shock by Elizabeth Briggs
The Angel of Nitshill Road by Anne Fine
Witness by Piper Davenport
The Time by the Sea by Dr Ronald Blythe
Our partner