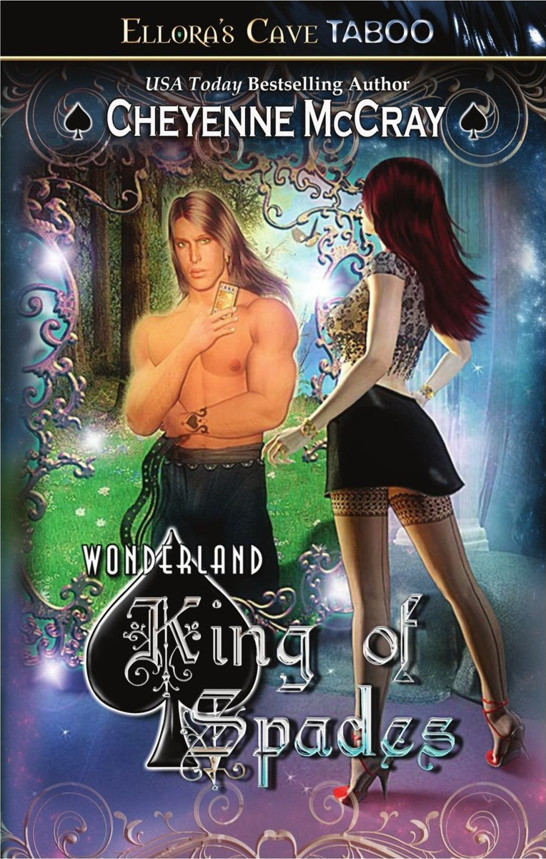 Certain images contained within this e-book have been digitally marked by Digimarc Corp. If you purchased this e-book from a source other than Ellora's Cave or one of its known affiliates, contact [email protected] immediately. Please note that reading this e-book without first purchasing it through legitimate means is illegal and can result in heavy fines. As always, our authors thank-you for your support and patronage.

In the spirit of fantasy, the Wonderland series is also pure fantasy when it comes to sex. In real life, keep it real and practice safe sex. We’ll keep the fantasies in Wonderland. ;-)

Using his magic King Darronn shoved open the doors and strode onto the private balcony of his château, his boot steps heavy thuds against the granite flooring. With a scowl he flexed his massive chest beneath his leather tunic then braced his hands on the low balcony wall while he viewed his realm nestled in the great Tarok Mountains.

Smoke wisped from cabin chimneys in the village, the acrid scent mingling with damp forest smells of wet leaves, loam, and pine. Blue-green mist crept close to the ground and swirled around the feet of the villagers going about their daily duties. He leaned against the railing and watched a spotted
anlia
buck and his doe slip through the forest mist until he could no longer see the pair and could only scent them with his keen weretiger senses.

Ravenwood flowers perfumed the air from where they spilled down the wooden trellis from his balcony to the ground. The purple blooms fluttered in the wind and loose petals swirled away with the breeze.

A fierce growl rumbled within him, the sound lost in the thunder of the nearby falls. One day he might again experience pleasure at the sight of his splendid kingdom.

When I no longer fear for my subjects and their collective futures. When children once again scamper through the meadows and their voices ring over the hillsides.

Cool wind swept off the waterfall, over his face and bare arms, and lifting his long wood-brown hair away from his shoulders. The falls tumbled from the range’s uppermost reaches to well below the Kingdom of Spades and the mountain village, and fed into the Tarok River. The invigorating wind cleared his senses and prepared him for the step he must now take for his people.

With the birth of werecub twins to the High King and Queen months ago, after a four Tarok month pregnancy, great joy spread throughout all of Tarok. When Queen Alice had conceived last spring, new hope had blossomed within the four kingdoms that Mikaela of Malachad’s black reign of sorcery had come to an end. The hope had been that breaking her mindspells and bringing forth new life would allow all the women of Tarok to again be fertile.

Yet no other children had been conceived in the spring in any of the Tarok Kingdoms. And of course no other babes born in the fall.

At the thought of his newborn niece and nephew, a surge of pride seized Darronn’s chest and he gripped the railing tighter. The babes were healthy and growing quickly, as weretiger cubs should. The girl had been named Lexi, after the High Queen’s sister who was somewhere on Earth, and the boy was Lancelot, a name Queen Alice fancied from her world. Odd names, both, but they suited the children who neared four Tarok months of age. The infants now crawled about and were into everything they could get their tiny hands on, much to the excitement of their mother, the consternation of their father, and the amusement of their three doting uncles.

On his last visit just a week ago, Darronn had clenched his jaw in frustration at the sight of the small army of guards his brother Jarronn was forced to keep around his infants and mate when he was not with them.

The cubs should only know the freedom of living in a Tarok Kingdom,
he thought,
not cages of any kind.

Over a long, brutal, and bloody summer, the four Kingdoms of Tarok had gone into battle with Mikaela’s warriors and had dealt Malachad a devastating blow. Her warriors had retreated to lick their wounds, and the Kings of Tarok knew it was only a matter of time before they would go to battle once again. Now, months later, Mikaela had reasserted her menace. Her mind-powers were too great to discount and her
bakirs,
her legion of psychics, had regrouped and had recently begun mental attacks anew on the High King’s court.

The bitch.
Darronn bit back a snarl. Mikaela’s betrayal of the Tarok clan had ripped at his soul, a jagged, poisonous wound that had eaten away at his heart since the moment he learned of her treachery. At one time he believed himself to be close to his younger sister, more so than his three brothers…but she had used him.

He tossed back his head and this time a savage roar ripped from his throat. The cry echoed throughout the mountainside kingdom. A cry of power and of the cunning he would use to aid Tarok in defeating the bitch… And a cry of powerlessness raging through his soul, that his people had gone nearly two decades with no conceptions, no births.

Mikaela sought revenge for being slighted when their parents split the larger Tarok Kingdom into four lesser kingdoms, and had bequeathed all to their four sons and nothing to their daughter. Before Mikaela had left to mate with King Balin of Malachad Kingdom, she had oft told Darronn he should be angered that his twin Jarronn had been made ruler over Tarok when he was but hours older than Darronn.

“
You
should be High King,” she had said many times in the sweet voice she always used with him.

But he had simply responded, “Their choice was as it should be. Jarronn is far better suited to rule all of Tarok than I, and he is the eldest.”

Darronn recalled the flicker of darkness in Mikaela’s eyes. He should have known then, but his love for his younger sister had blinded him to her treachery.

“Master, it is time.” Kalina’s melodic voice floated over the roar of the waterfall, interrupting his dark thoughts.

With a frown, he turned to see the sorceress standing in the doorway to his chambers, her head bowed as she waited for his instruction. Having served the High King in the Kingdom of Hearts for over a decade, Kalina was well-trained in her submissive role, and obviously relished it.

“Wait for me in my chambers,” he commanded.

The sorceress bowed, and disappeared back through the doorway.

After one last look at his realm, Darronn strode across the balcony into his quarters, and closed the doors behind him. A fire burned in the hearth, taking the chill from the room. Kalina stood beside the glowing
a’bin,
the magical table she had transported with her when she recently joined him in the Kingdom of Spades.

Kalina’s head remained bowed, her hands behind her back and her feet positioned well apart so that he might reach for her luscious slit beneath her scant black leather trappings. Unlike the Kingdom of Hearts, where most women wore almost nothing at all, Darronn preferred his women to wear leather. Kalina’s dress had two thin straps crisscrossing her breasts and exposing her berry-dark nipples. Her belly and back were bare, but the bottom half covered her tiny ass and her bare mons. Still it was short enough to tease him with tantalizing views when she moved or bent over. Darronn’s black and gold collar of ownership encircled her throat and from each of her recently pierced nipples swung a single gold spade charm.

Kalina wet her lips with her tongue, and he knew that she wished for his cock. “What is your pleasure, Master?”

The room was warm from the fire burning in the hearth, vanquishing the chill from the balcony. At the sight of the lusty sorceress, a slight sheen of sweat coated Darronn’s powerful body, his cock growing hard and erect. A feral purr rose up within him at the smell of Kalina’s desire. He felt sorry for his brother Jarronn, who now only had one woman for his pleasure. However, Darronn did not at all mind the fact that as second born and heir-designate he inherited Kalina and would inherit anything else Jarronn released until Lance and Lexi were much older.

Darronn moved to the
a’bin
where the sorceress stood and turned his gaze to the three cards. It did not please him that he was forced to select his queen from a mere card, as his brother had. True, Jarronn’s mate had been well-chosen, and Darronn had certainly enjoyed mind-bonding with the High Queen when he buried his cock in her ass while Jarronn thrust into her pussy, and Karn and Ty each fucked Alice’s mouth and breasts.

Kalina’s well-oiled body gleamed in the candlelight and she flicked her tongue along her red lips. “You must choose, Master.”

“I did not ask your advice, wench.” Darronn’s muscles flexed as he caught Kalina’s chin and forced the sorceress to look up at him. “Punishment is in order. Mayhap I should use my strap against your backside.”

“If it pleases you, Master.” Kalina’s fire-ice eyes flared and the scent of her arousal grew stronger. “But first, you must choose.”

Darronn’s rumbling growl would have been enough to make any other of his subjects flinch, but not the sorceress. “Kneel,” he commanded, and with a flick of his tattooed wrist he magically removed all his clothing so that he stood naked before her.

Kalina gracefully obeyed, lowering her eyes and holding her hands behind her back as she knelt.

Clenching one hand in her long black mane, Darronn tilted her head back so that her amber eyes met his. “Suck my cock while I choose my mate.”

Darronn pulled the sorceress to him by her hair and watched as his cock slid through her warm and anxious lips. For a few moments he thrust in and out as she flicked her tongue along his length, building the inferno of need within him that had never been fully quenched by any woman. The gold spades along her collar glittered in the candlelight and the gold baubles at her nipples swung faster with the intensity of her motions.

While Kalina sucked his cock, Darronn held his hand over the
a’bin
, and moved his palm above the three cards. At once the middle card glowed and a tiger emblem sparkled at its center. The rush of power that shot through Darronn bolted straight to his cock, making his erection tenser than ever, and Kalina moaned in excitement.

Without hesitating, Darronn scooped up the card and flipped it over in his palm, and he nearly climaxed from the desire that rushed through him.

Thick reddish brown hair framed a beautiful face with lips made to kiss; full breasts created for him to suck; and long legs to slide between when he thrust his cock deep inside her. The woman’s aqua eyes seemed familiar to him, much like Queen Alice’s. But the woman’s Tarok sky gaze held fire and challenge, and Darronn knew she would not be easy to tame.