Read Knot in My Backyard (A Quilting Mystery) Online

Knot in My Backyard (A Quilting Mystery) 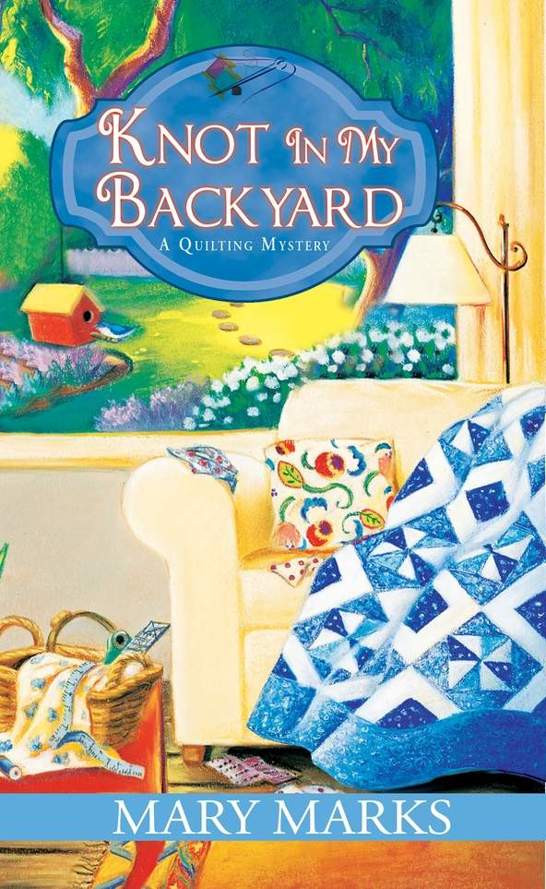 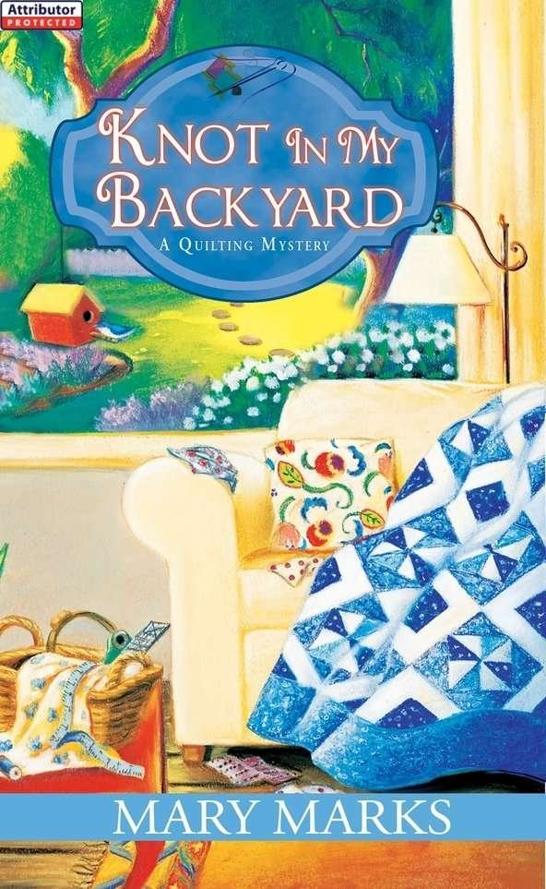 KNOT IN MY BACKYARD

“Go home and look at your new quilt,” Lucy said. “Maybe working on it will help you make sense out of all those pieces floating around in your head.”

I drove back home, determined to follow Lucy’s advice. The thermometer on my dashboard put the outside temperature in the nineties. I rushed from the air-conditioning of my car to the cool interior of my house. I cleaned up the coffee cups and donut crumbs, put in a load of laundry and made my bed.

A savage beating indicated his killing was personal, an act of rage. Who was Dax Martin really, and who did he piss off so fatally?

KNOT IN MY BACKYARD

This book is dedicated to
the source of my
nachas
:
Olivia & Chloe, Genevieve, Makayla,
Lilliana, Danielle, Oliver & Camille,
and Chyanne & Chelsea.
Nine girls, one boy, three sets of twins.
Oy!

Heartfelt gratitude goes to my mentor, Jerrilyn Farmer, and my critique partners, Cyndra Gernet and Lori Dillman. Along with Dawn Dowdle, from Blue Ridge Literary Agency, you all made me so much better than I started out to be.

And, finally, a big thank-you to John Scognamiglio and all the wonderful folks at Kensington, who work so hard to help this cozy-mystery author.

Writing this book was particularly satisfying for me because, although purely fictional, it was inspired by true events perpetrated by the US Army Corps of Engineers. If you want to know more, Google “Sepulveda Basin Wildlife Reserve Devastation.”

Yesterday I joined Weight Watchers for the eighth time. The lecturer, Charlissa, told me to get rid of all the bad food in my house and take a walk every day. So I did what she said, confident
this time
I’d work the program successfully.

After a breakfast of egg whites scrambled in one teaspoon of olive oil, I bent over to put on my new white athletic shoes. The top of my size-sixteen Liz Claiborne stretch denim jeans dug into my waistline. No doubt about it. At the age of fifty-five, I, Martha Rose, was outgrowing the largest clothes in my closet. I didn’t think I could feel any worse today, but I was dead wrong.

I lived with my orange cat, Bumper, in a friendly residential area of the San Fernando Valley. Directly behind my house stood a fenced-off baseball field. A ritzy private school, whose nearby campus ran out of room, had muscled their way in and built a large new stadium on park land right behind our quiet street.

On the far side of the field, less than two hundred yards away, the Los Angeles River flowed east through the San Fernando Valley, crossing Glendale to Downtown LA, and out to sea at Long Beach. I planned to walk around the perimeter of the field to the bank of the river and back again. What a mistake.

In the summertime, the air can sizzle by noon. At eight this morning in late August, the temperature had already reached seventy-nine degrees. Gravel crunched under the rubber soles of my new shoes as I ambled along a dry path just outside the tall chain-link fence around the baseball field and onto the riverbank. No bushes were allowed to grow on the near side, the private-school side of the river. Only small weeds and grasses parched in the heat. Thick coyote brush, deer weed, and cottonwood trees topped the far side of the riverbank.

Concrete covered the bottom of the river, and the slopes were sprayed with stucco, courtesy of the Army Corps of Engineers. In the wintertime, rainwater from the mountains transformed the LA River into a raging, swift-water death trap. Someone managed to drown in it every year. After the rainy season ended, the river dried to just a trickle. This day in late August, only a thin thread of brown water inched downstream.

Something scuttled through the dense brush on the far side of the river. The fluffy brindled tail of a coyote appeared just before he disappeared into the landscape. I also made out bits of color hidden beneath the larger bushes, flashes of metal and plastic. I could barely identify a couple of sleeping bags and what looked like a cooking pot. Those bushes sheltered the homeless almost year round. I just couldn’t detect anyone there at the moment. The homeless knew how to become invisible.

As I walked on, I saw a large heap of clothing come into view about ten yards ahead. At first, I thought some people had used this isolated spot to dump their trash. When I walked closer, I made out the body of a man lying tangled inside the dark jeans and maroon-and-gold baseball jersey. The dark red ground underneath his battered head crawled with ants and flies. His jaw hung open at an unnatural angle, and I didn’t need to check his pulse to know he didn’t have one.

The shaking started somewhere in my knees, and my stomach pushed up toward my throat. This was the second time in four months I’d discovered a dead body. My head started to float away—déjà vu all over again.

The first time I’d been with my quilting friends, Lucy Mondello and Birdie Watson, when we discovered the murdered body of another quilter. I was the one who eventually figured out the identity of the killer. The guy who worked the case was Arlo Beavers, a tall, hunky LAPD homicide detective, with a white mustache.

Beavers and I have been dating since then, which is kind of surprising since we started off on the wrong foot. He kept warning me to stop poking around the investigation. In the end, he was right. Because I refused to stop searching for answers on my own, I was thrown in jail and almost killed. After that, I promised myself and my friends I’d just quilt like a normal person and leave the policing to the pros.

And now, I had to tell him I just stumbled on what was obviously another murder. How would he react? Still staring at the dead man, I pulled my cell phone out of my pocket with badly shaking hands. Thank goodness Beavers was on speed dial.

He laughed. There was a long silence. “You’re kidding, right?”

I looked over at the body again. “I’m on the far side of the baseball field behind my house. He’s lying on the banks of the wash. There’s so much blood. I feel sick.”

Then I moaned as I felt my stomach rising.

I doubled over and threw up all over my new white Skechers.

I just realized I knew the dead man.

I shuffled backward, dust forming a crust on my soiled shoes, until I hit the chain-link fence separating the well-manicured green outfield from the semi-wilderness of the watershed. I collapsed against the fence and slid down to the ground, waiting for the police to show up. So much for my walking career!

Moments later, sirens sounded. A young patrolman squatted next to me and his nose twitched when he glanced at my soiled shoes. “You all right, ma’am?”

“My pants are too tight.”

He frowned with concern, looked over his shoulder, and waved a paramedic toward me. “She’s in shock.”

Beavers got there just as the guy removed the blood pressure cuff from my arm.

“Really, I’m fine!” I struggled to get up. The snap on my waistband popped open. Then two strong men lifted me by my arms to a standing position.

In contrast to my short plumpness, Beavers stood a lean six feet tall. His Native American eyes searched mine for reassurance I was all right. He wrapped his arm around my shoulders and gently led me toward my house. “I’m going to walk you home, Martha. What were you doing back here?”

I pushed my glasses back on my nose. “Just taking a little stroll.” I wasn’t going to admit I needed to lose weight, just in case he hadn’t yet noticed the extra pounds. “I came across the body and called you. Then I kind of got sick when I realized I knew the guy.”

Torchship by Gallagher, Karl K.
Malice at the Palace by Rhys Bowen
No Woman No Cry by Rita Marley
ROCKY MOUNTAIN REVENGE by CINDI MEYERS
Bury Me Deep by Megan Abbott
The Scarecrow (Master of Malice Book 1) by Peace, Cas
The Vorrh by B. Catling
Naomi and Ely's No Kiss List by Rachel Cohn
Operation Zulu Redemption--Complete Season 1 by Ronie Kendig
A Shameful Secret by Ireland, Anne
Our partner