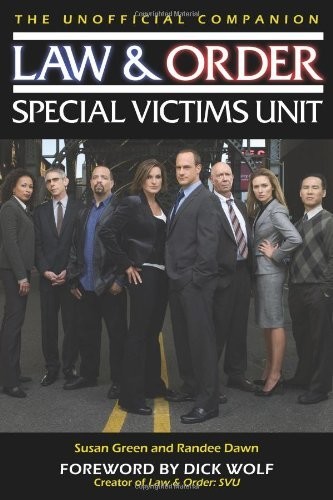 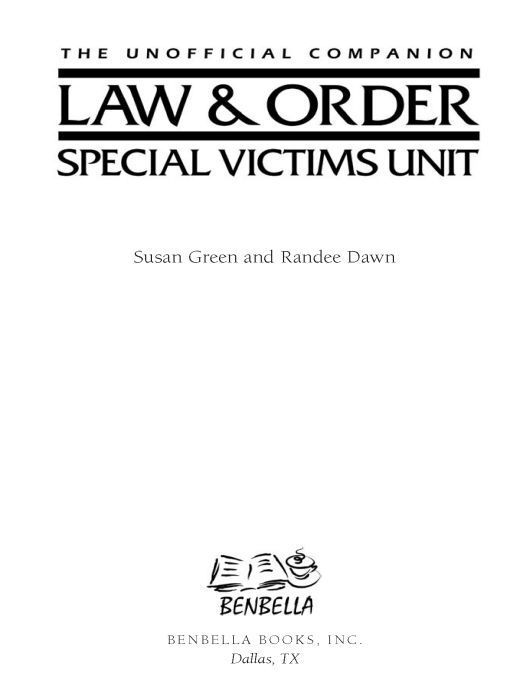 Rounding up the Brain Trust

Tinkering with the Concept

Many Rivers to Cross

CHAPTER TWENTY-ONE - ACTORS AND THEIR CHARACTERS

PRODUCTION TEAMS FOR ALL SEASONS

CHAPTER TWENTY-THREE - HOW THE NUMBERS ADD UP 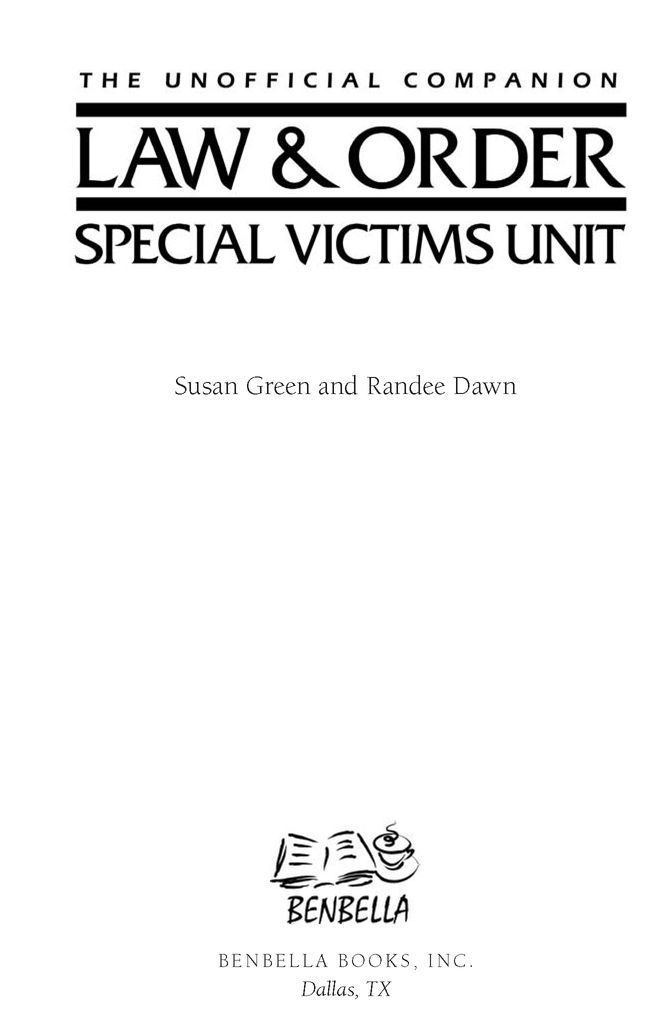 For my mother, an artist haunted by the Holocaust who embraced life until the end
—SUSAN GREEN
For all of the special victims, who learn to be survivors
—RANDEE DAWN
ACKNOWLEDGMENTS
O
ur deepest gratitude goes to Dick Wolf, a man who really knows how to make things happen. We also want to profusely thank
SVU
’s Neal Baer, Ted Kotcheff, David DeClerque, Peter Leto, Mike Ciliento (our hero!), Jim Nickas, Meredith Petty, Ryan Spencer, and Gail Barringer—as well as all of the fine cast and crew who made our visit so delightful and pleasant and, well, yummy; Mariska Hargitay for going above and beyond; Lippin Group’s Pam Golum and Audrey Davis; Peter Rubie of Fine Print Literary Management; Glenn Yeffeth, Jennifer Canzoneri, Yara Abuata, and Leah Wilson of BenBella Books; Wolf Films’ Arthur Forney, Lydia Mayberry, Adrian Bassuk, and Kristel Crews; NBC Universal’s Charlie Engel, Curt King, Amanda Ruisi, and Christy Havranek. Kudos to photographer Dave Allocca and artist Brandon Bird. And, as people in love with the written word, we must express our admiration for the storytellers behind a decade of episodes: Dawn DeNoon, Lisa Marie Petersen, Amanda Green, Jonathan Greene, Judith McCreary, Patrick Harbinson, Jeff Eckerle, Robert Palm, Robert Nathan, Paul Grellong, Michele Fazekas, Tara Butters, Dan Truly, and Mick Betancourt.
Susan:
I have boundless appreciation for the support that comes from my wise daughter Jennie, who never lets me get away with anything; the amazing Bob Green and Bill Coil; poet supreme Ryki Zuckerman of Buffalo; wonderful cousins Shirley and Sandy Guth and Dave and Judy Solomon; the erudite Deborah Straw and Bruce Conklin; the perceptive Suze Rotolo, friend for half a century, and the savvy Enzo Bartoccioli; photography genius Ron Levine in Montreal; my
sympatico
colleague Kevin Courrier in Toronto; the always creative Debra Weiner in Chicago; wittily observant Chris Booth, across the big pond; fellow “wild thing” Susan Connell, to be remembered forever; good neighbors Rick and Karen Sener; Pogo and Isabella, the best kitties a writer could possibly want.
Randee:
Many thanks to my former employers at
The Hollywood Reporter
, who gave me the room to get this book made—including Stephen Galloway and Christy Grosz for their advice, encouragement, and support. To my longtime co-editor at
apocrypha
, Anne Sapko (and her amazing husband Jeff) for coming along on this now-fourteen-year-old
Law & Order
ride, to Michelle Loo who helps out every week keeping the list going, and to all of our longtime subscribers and readers. To my dear friends who have encouraged my writing over the years in all of its forms, including Julia Harrington, Rebecca Hoffman, Alexis Gerard, Valerie Mehta, Nadine Rufrano, Monica Gorlewski, and Cecelia Donohue—I finally have something for you to read that comes with a bar code on it! And finally, to my brother Craig and his beloveds Kris, Sydney, and Natalie, and my mother Lois, who made everything possible for me from day three up to this very moment.
INTRODUCTION:
DICK WOLF SPEAKS
T
he story of
Law & Order: Special Victims Unit
starts over ten years ago. At the time,
Law & Order
had just won the Emmy Award for Outstanding Drama Series and it was one of the top drama series on television. I was inspired by the show’s success, and when
Exiled: A Law & Order Movie
was a ratings hit in 1998, I realized that the Law & Order brand was ripe for another spin-off, this time a new series. 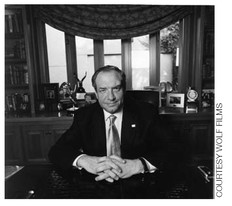 Dick Wolf
Fortunately, Barry Diller, who was running the production studio at the time, agreed.
The inspiration for
Law & Order: SVU
goes back to the Robert Chambers case, the preppy murder in Central Park, which we did a variation of in the first season of
Law & Order
. I wanted to get deeper into the psychology of crimes like that, the role of human sexuality. At the same time, I saw a chance to expand the Law & Order brand, to create a universe of characters that would run between the two shows, who have real ties that continue and change. It may sound pretentious, but I thought of
Law & Order
and
SVU
as a huge novel, like Dickens’ London. And not only did
SVU
survive, it thrived.