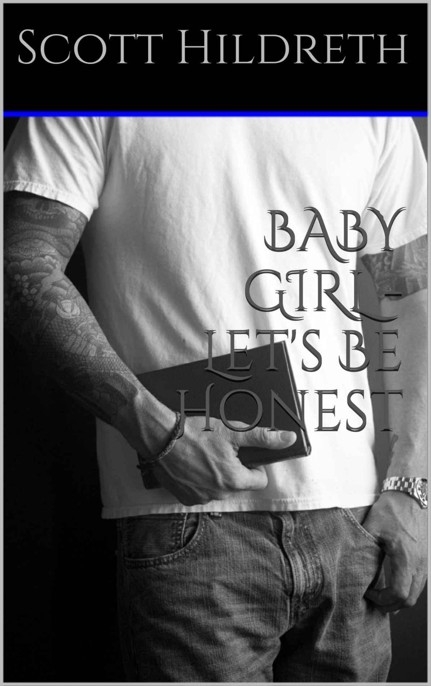 Scott Hildreth resides in Wichita, Kansas and is well aware of who he is. He tries to write stories that his target audience can relate to. You just may find a little of yourself in The Erik Ead Baby Girl series.

This writing is intended to be read after
Baby Girl
, but between Baby Girl Book II,
For The Ones We Love
and Book III,
Love That Just Is
.

If you have read Baby Girl II, proceed with this read. If you have not, please do so before you read
Let’s Be Honest.

BABY GIRL BOOK II – For
The Ones We Love

OTHER BOOKS BY SCOTT HILDRETH

This writing is dedicated to all of the women that feel like they’re living through the mind of Kelli Parks.

This book is a work of fiction. Names, characters, places, and incidents are the product of the author’s imagination or are used fictitiously. Any resemblances to actual events, locales, or persons living or dead, are coincidental.

All rights reserved. In accordance with the U.S. Copyright Act of 1976, the scanning, uploading, and electronic sharing of any part of this book without the permission of the author or publisher constitute unlawful piracy and theft of the author’s intellectual property. If you would like to use the material from the book (other than for review purposes), prior written permission must be obtained by contacting the author at
[email protected]
. Thank you for your support of the author’s rights.

Cover art by the one and only Emily
Dukat

KELLI.
I don’t think anyone should judge people for what they have done in the past. It’s easy to say that a person, based on their past, is a certain type of person that will be more apt to do certain types of things. I don’t believe that is
always
the case, I guess it would depend on the circumstances and the person. With Erik, I didn’t care what his past included.

What I cared about was
now
. Erik Ead is the first man that I have ever loved. I want him to be my last. The thought of not having Erik in my life is crushing.

The bottom of a box had opened and everything inside spilled onto the floor. Heather, when picking everything up, noticed a diary that Erik had kept. She said we sh
ould look inside to see what he had done in his past.

“Just put it down, Heather. It’s Erik’s
life
. It’s his secrets. Put it down,” I demanded.

“I just want to look at it,” she said as she started to open the cover.

I pulled the diary from her hand.

“It’s not yours. Would you want Erik to know everything about you? Are there things you and Teddy do that you don’t want him to know?” I asked, angry.

I didn’t let her finish, “Your childhood? Anything from your childhood you’d like to keep a secret?” I asked.

She raised her eyebrows.

“Okay. This isn’t for you to look at. I’m going to put it up,” I said as I turned to walk upstairs.

I would no more look in Erik’s diary than I would stab him in the back with a knife. Not from fear of him finding out, or
from concern of what I may or may not find, but out of respect. We all have a past – every one of us. Our past allows us to be the person we are today, naturally.

Without our past, happening the way it happened, including all of the events - good and bad - we would be different people. I don’t necessarily like all of the events in my past, but I don’t know that I’d change them.

“No, I would never look inside of his things. I respect him, you know that about me,” I said as I turned to go up the stairs.

When I walked back into the kitchen, Heather was playing the drums with silverware on the island.

“Sorry, I got shitty,” I said as I walked in the kitchen.

“No problem,” she
said as she looked up from her drum solo.

“What are you doing?’ I asked, laughing.

“I’m ready for them to get back here, I miss Teddy,” she said.

“You’ve never been happier, have you?” I asked.

“Not to just keep on it, but would you look in Teddy’s diary?” I asked.

“Not only hell no, but fuck no. I thought about that while you were walking upstairs,” she answered.

“Why not,” I
asked, her immediate hell no surprised me.

“Because I love him,” she said.

“Well, I love Erik,” I said as I made a silly face, bobbing my head from side to side.

“I hope Erik will have a house warming party, it’d be gre
at to have everyone over. Erik says this is
ours
, not his. He said we got it
together
. This is just crazy,” I said as I looked around the kitchen.

I
was excited at the thought the home, in Erik’s eyes, being ours.

“You didn’t hear?” she said, looking up from the box of silverware.

“About the party?” she asked.

“Oh, maybe it was supposed to be a
surprise
,” she said.

I raised my eyebrows in wonder.

“Tell me,” I said, barely able to contain my excitement.

She held her arms outstretched as far as she could, and mouthed the word
‘huge’.

Huge.
With Erik Ead, I would expect nothing less.

ERIK.
We all have a past. Denying it would be to deny our existence. True acceptance of our past allows us to stand, as we are today, with whatever pride we are able to muster. However, everyone has a
portion
of their past that will scare the hell out of the most fearless of men.

To wha
t degree the fear is felt or even understood depends on the events of the past, and one’s ability to comprehend or understand the events as being just that – something in the past.

My past has been an eventful one, sexually speaking. I have always k
nown that I used women as a tool, or a means of satisfaction of sorts. To me, a woman has always been no different than a car - something that I used as I needed to, and discarded when I was done.  As bad as that might sound, I have never misled a woman into thinking she would receive something from me that she wasn’t going to get. Most women eventually want so much more, or secretly hope that they’ll
be the one
.

Knowing these things never prevented me from proceeding along the same path each time. Using a woman, telling her that she was going to receive sex and nothing else – then, after whatever time was required for her to develop some form of expectation or feelings, I would leave her.

I would leave her before
I
felt pain, never considering what
she
may feel.

My desires sexually changed over the years, and I used women to develop a means of understanding
potential
future
women. To me, if one hundred percent of codependent women reacted a certain way, I knew that I could expect a certain reaction to a prescribed action. Using a woman was a way for me to compile data. Useful data. This useful data allowed me to proceed with other women more successfully.

Sex, in itself,
was a release. It was, to me, the same as being in a relationship or being married, without the commitment. A commitment requires one to open up, and that exposes the person who is
opening
to potential pain.

Kelli finding the diary did
not
trouble me. She stated that she didn’t read it, and I believe her. The fact that I had kept it, forgotten about it, and eventually exposed her to it
did.

I love that woman, and I do not want to hurt her.
Ever.

Love is a powerful thing.

I have not
always
loved.

ERIK.
Sitting at the fireplace, I opened the cover. The early entries were short and without much detail. As I flipped through the pages, I considered keeping it for recollection of memories - similar to Kelli keeping her treasures in the mason jar. Something to remind me of the past. Something to ignite the fire of what could become a vivid recollection of past experiences. A reminder of what got me to where I am today.

Thumbing through the pages, I saw a familiar name.

I closed my eyes and though
t of the day we finally spent time together alone.

We had met for the first time at my 28
th
birthday party, which was a very small gathering. It included primarily some college friends that were aware of my birthday, and had thrown a party – to my initial displeasure.

Meeting her
at the party made an immediate impact, but she was accompanied by a
friend,
which prevented me from making any meaningful advancements
.
She was medium height, very petite, and blonde. She was, on a scale of 1-10, certainly a 9 plus. She was the typical adorable girl that we all dream of. This alone is what attracted me to her. I wanted to fuck her in the ass. Primarily because she looked like she wouldn’t stand for it.

A
week or so after the party, we had agreed to meet at my apartment in Manhattan, close to the campus.

“So, this place is really
nice
,” she said as she looked around the room.

“It suits me – want something to drink?” I asked.

“Sure,” I said as I stepped into the kitchen to get a bottle from the refrigerator.

“I just can’t stand the water in this town, it smells funny,” she said as she followed me in the kitchen.

“You mean it tastes funny?” I asked.

“No, smells. It smells funny,” she reiterated.

“Oh, never smelled it, I don’t guess,” I said as I handed her the water.

She took a sip of the water and screwed the lid back on. For a short moment, she turned and looked into the living room. Turning back into the small kitchen to face me, she placed the water on the counter.

“So, explain what you were saying in the BBM you sent me,” she said.

“It was pretty self-explanatory, was it not?” I asked.

“Take off your top,” I smirked when I spoke.

“You heard what I said, and I’m not going to reiterate the entire message. We can go back into the living room and look at our damned phones if you really want to. Take off your top,” I demanded.

“I’m not going to take off my top, we haven’t even talked yet,” she said with her hands on her hips.

Oh you’ll take your top off. Either that or you’ll leave.

She had made no effort to pick up the bottle of water, or to walk into the other room. If she truly didn’t want to take her top off, she would attempt to change the pace of what was going on. Clearly she wanted to play a game. I wasn’t in the mood.

“Listen. I’m not going to play games. I
told
you what I wanted. You read the messages. We’ve been texting for a week. You
know
what I want. Get undressed. Or, I suppose you can take the water and leave. You pick,” I said as I walked toward the living room.