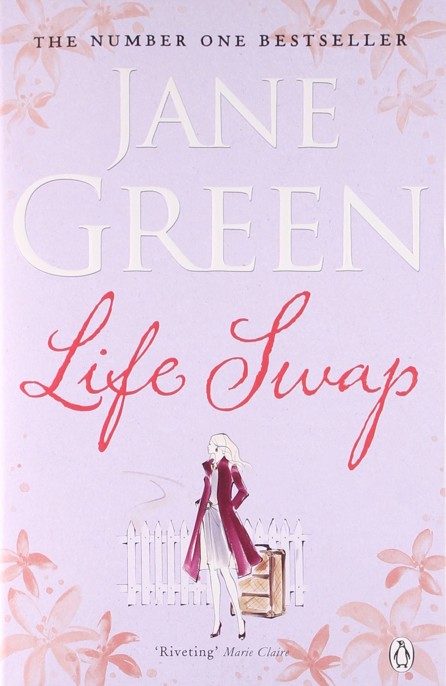 Without limiting the rights under copyright
reserved above, no part of this publication may be
reproduced, stored in or introduced into a retrieval system,
or transmitted, in any form or by any means (electronic, mechanical,
photocopying, recording or otherwise), without the prior
written permission of both the copyright owner and
the above publisher of this book

With gratitude and thanks as ever to all at Penguin, Anthony Goff, Vicky Harper,
Red
magazine, Peconic Baking Company, John Roch and Gary Chase (
not
Amberley Jacks in the slightest), Alisa Messer, Nancy Laner, Dixie O’Brien and of course my family.

This is not a straightforward story of romance. Which is not to say there are no happy ever afters, but that you ought not to open this book knowing that the Prince and Princess disappear hand in hand into a glorious sunset.

In many ways, the story I’m about to tell you is not about romance at all. If anything, it is a story of real life. Of how each of us may think we know exactly what we need to make us happy, what will be good for us, what will ensure we have our happy ending, but that life rarely works out in the way we expect, and that our happy ending may have all sorts of unexpected twists and turns, be shaped in all sorts of unexpected ways.

And our own personal paradise may be someone else’s version of hell. Or indeed vice versa…

Take Victoria Townsley, for instance. At thirty-five she is wonderfully, fantastically successful. She is Features Director of
Poise!
magazine – a magazine so stylish, so hip, so glossy and perfect – Victoria is, as she should be, the very embodiment of what the
Poise!
reader strives to be. Tall and on a good day slim-ish, she uses Aveda on her glossy hair, Eve Lom on her peachy skin, and Bliss lemon scrubs on her not-so-toned-except-you’d-only-know-that-if-you-saw-her-with-her-clothes-off body.
In short, she uses exactly what the beauty director of
Poise!
prescribes as the latest and greatest of all beauty products, guaranteed to give you youth, dewiness, and to prolong your life by thirty years.

Victoria – Vicky to her colleagues and friends – lives in a beautiful flat off Marylebone High Street, decorated in Heal’s best neutral shades, accented by rich chocolate-brown leather accessories, Balinese bamboo bowls picked up on a travel junket last year, and a touch of oh-so-trendy chinoiserie in the form of Chinese dressers that were found one Saturday morning down at Portobello Road.

The fridge is stocked with bottles of white wine, two cans of Diet Coke and a couple of low-fat yoghurts. In the butter compartment is a half-eaten bar of Cadbury’s Milk Chocolate, but Vicky has forgotten it is there, and it is now three months past its sell-by date, although on Wednesday, two days before Vicky’s period starts, she won’t very much care about that.

Vicky’s cat, Eartha, is curled up on her bed, lazily rolling over to stretch a paw out to claim her domain, happily looking forward to Vicky’s arrival home from work when she will jump on her lap purring, thrilled to be the most important person in Vicky’s life, thrilled, in fact, to be the only one to sleep in Vicky’s bed on a regular basis.

Because whilst you and I might look in awe at everything that Vicky has, at how she has built a career up from nothing to become one of the most successful female journalists in London, how she has no responsibilities,
is able to go to glamorous parties and book launches and preview shows every night, and sleep in until nine in the morning, Vicky is not happy.

At thirty-five, Vicky is stunned that she is still single. Stunned that each of her friends has slowly been picked off, that she has been bridesmaid more times than she cares to think of, but that no one has ever chosen her.

And it’s not even as if she has come close. She never worried about it in her twenties, when her longest relationship was six months, when she was far too busy making a name for herself in journalism, jumping from the
Liverpool Echo
down to London as a staff writer on
Cosmo
, switching to
Poise!
a few years later. When she hit thirty she vaguely thought that now she ought to start thinking about settling down, but by the time she came up for air, at around thirty-two, she realized that all the good men had been taken, and all of a sudden her prospects didn’t look too good.

On her thirty-fifth birthday Vicky stayed home and got drunk. She replayed all the movies she’d loved when she was single and hopeful –
An Officer and a Gentleman, Baby Boom
,
When Harry Met Sally
– and she forced a few tears as she thought about how lonely she was and how much she wanted a husband and children, how much she wanted the life that her brother Andy had.

Andy, three years younger than her, had married his girlfriend from university, Kate. They had three children, Luke, Polly and Sophie, two huge lurchers and had moved out of central London a few years previously
to bring up their children with fields and green and ponies.

It was, in short, everything that Vicky ever wanted. She adored Kate, always described herself as having the best sister-in-law in the world, in fact thought of Kate as the sister she always wanted, and she loved her nieces and nephew more than anyone in the whole world.

Vicky thought she was going to die when they all moved out of London, but she hops on the train down to Somerset at least twice a month, and spends happy weekends sitting around the scrubbed pine table in the Aga-heated kitchen, bemoaning her single status as Kate rolls her eyes, attempts to shake off a Polly who’s clinging to her leg and shrieking with glee as Kate drags her across the kitchen floor, and says she’d kill to be in Vicky’s shoes, that Vicky doesn’t know how wonderful her life is.

At that point Kate was the one shrieking with laughter. ‘Does Andy worship my every move, then?’ she said.

‘Actually, no. I don’t,’ Kate said firmly. ‘Your problem is you’re a complete romantic. You keep thinking that marriage and children are going to come along and
give you this wonderful life, when first of all your life is pretty damn wonderful anyway, and second of all I don’t know where you got it into your head that a life with marriage and children is so great in the first place.’

Vicky looked at Kate in shock. ‘It’s not?’

‘It’s not that it’s not.’ Kate sighed. ‘It’s just that it’s not this perfect romantic idyll that you seem to think it is. Not that I’d expect much less from a girl whose favourite film is, what was it again?
Pretty Woman?
’

‘No.
Baby Boom
,’ Vicky said reluctantly. ‘But for God’s sake don’t tell anyone. It’s my secret shame. I’m always going on dates and telling them it’s a Louis Malle, or some fabulous French art-house movie that actually I found spectacularly boring.’

‘Is
Baby Boom
the one with the vet?’

Vicky did a mock swoon. ‘Sam Shepherd. You see? Why can’t I find a vet like that? Why doesn’t someone leave me a gorgeous cottage in the country?’

Kate rolled her eyes yet again. ‘If you think life is so wonderful in the country why don’t you sell the flat and buy something? It doesn’t have to be Somerset. You could buy in Oxfordshire somewhere and commute.’

‘What about that Daniel?’ Kate said. ‘Aren’t you still seeing him?’

‘I’m not seeing him.’ Vicky sighed. ‘It’s just an arrangement we have. He’s my neighbourhood shag. As long as we’re both single and we live so close, we just get together from time to time.’

‘Sounds very odd to me,’ Kate said. ‘Couldn’t it develop into something more?’

‘God, no.’ Vicky shuddered. ‘He’s great in bed but not husband material in the slightest.’

Across the other side of the Atlantic Ocean lives Amber Winslow. She too looks, on the surface, to have everything she’s ever wanted. Married to Richard, a trader at Godfrey Hamilton Saltz, a large Wall Street investment bank, they have much the life that Vicky craves, only with more money and less mess.

When Amber met Richard she had struggled up from her humble beginnings in Hoboken, New Jersey, joining a midtown law firm straight from college. She had worked her way up, met Richard, and was about to be made partner when she discovered she was pregnant.

Amber considered getting a full-time nanny and going back to work, but in the end she decided to go with the nanny and forget the work.

A couple of years of squeezing Jared into a bedroom that was only slightly bigger than a cupboard in their apartment on Sixty Eighth, they decided to take the plunge and move out of the city. Richard was doing better and better, and although they couldn’t afford much more than a badly decorated tiny sixties colonial in the much-coveted town of Highfield, Connecticut, it was on a plot of two acres, and after a couple of years they decided to build an addition.

There was only one architect in town to work with – Jackson Phillips – and although he was the most
expensive – some might even call him a rip-off merchant – he was the one that all the in people used, and Amber knew how important it was to impress her new-found friends in the Highfield League of Young Ladies, and so they duly signed contracts with Jackson Phillips and off to work they went.

Amber and Richard thought it was a wonderful idea. A couple of weeks later they thought, why not add a new master bedroom on top of the garage? And thus began the spiralling out of control.

Just as they had finished the initial ideas, were about to start construction drawings and had already spent fortunes with Jackson Phillips, Amber realized what was bothering her all along about the work they were doing.

‘It’s the roof,’ she said to Richard. ‘As long as we have that shallow pitched roof everyone will know our house was a sixties colonial. All the new houses have steep roofs with dormers in them. We need to put a new roof on.’

Months later the sixties colonial, the house that Amber was adamant she didn’t want to knock down because she loved its charm, was knocked down, and Amber’s dream McMansion was built in its place.

It took twice as long as the builder had said, and cost
them three times the price. Jackson Phillips’ bill was so huge they spent the next few years warning off anyone they spoke to who was looking to do the same thing, but at the end of two years Amber knew it was worth it.

She had the most beautiful house on her street. Possibly even in the town. A stone and clapboard colonial that impressed way before you opened the front door to take in the marble floors and sweeping curved staircase.

Our Kind of People: A Continent's Challenge, a Country's Hope by Uzodinma Iweala
Slow Burn by Nina Perez
The Madness Of Lord Ian Mackenzie by Ashley, Jennifer
Autumn Softly Fell by Dominic Luke
Going Where the Wind Blows by Jan Christensen
The Ten-Year Nap by Meg Wolitzer
It's a Love Thing by Cindy C. Bennett
The Olive Conspiracy by Shira Glassman
Death out of Thin Air by Clayton Rawson
Few Kinds of Wrong by Tina Chaulk
Our partner