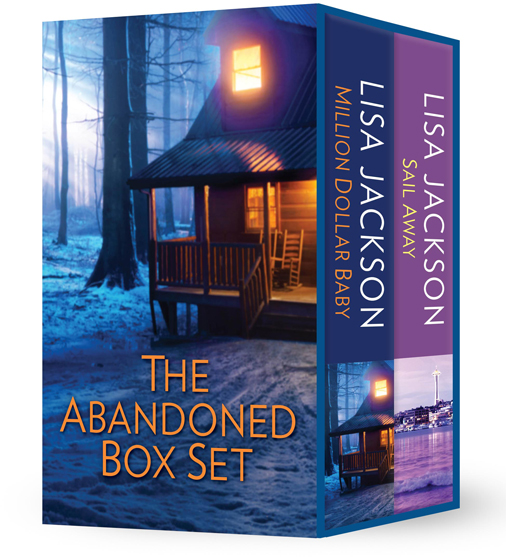 Adam Drake has been falsely accused and is hell-bent on clearing his name. Only his former boss's captivating daughter, Marnie, holds the key to proving his innocenceâ¦

Chandra Hill has given up on having a family. That is, until a baby is left abandoned in her barn, and she finds herself connecting immediately with both the baby and the handsome emergency room doctor who looks after himâ¦

“[B]estselling Jackson cranks up the suspense to almost unbearable heights in her latest tautly written thriller.”

“When it comes to providing gritty and sexy stories, Ms. Jackson certainly knows how to deliver.”

“Lisa Jackson takes my breath away.”

You Don't Want to Know

If She Only Knew

See How She Dies

SAIL AWAY
By Lisa Jackson

M
ARNIE
M
ONTGOMERY
tossed her briefcase onto the antique couch near the windows of her office. She marched straight to her desk, removed an earring and grabbed the phone. As she punched out her father's extension, she balanced a hip against the polished rosewood and waited, her fingers drumming impatiently, a headache threatening behind her eyes.

“Victor Montgomery's office,” a sweet voice sang over the wires. Kate Delany. Efficient Kate. Victor's mistress and administrative assistant. She'd been with him for years, and hoped to become the next Mrs. Victor Montgomery.

“Not yet. But I expect him any time.” Poor Kate. So helplessly in love with Marnie's father. Loving Victor was easy, as Marnie could well attest. But sometimes that love became overpowering, and Marnie felt as if she'd lost a part of herself, hadn't been allowed to grow into the woman she wanted to be.

She heard Kate flip through the pages of what she assumed was Victor's appointment book. “Your dad called from the course about half an hour ago,” Kate said thoughtfully. “He should be on his way back here, and it looks as if his schedule isn't too full this afternoon.”

Marnie's lungs constricted. She cleared her throat. “Tell him I need to see him the minute he gets in.”

“Very,” Marnie replied, replacing the receiver and suddenly feeling cold inside. Slipping her earring back in place, she noticed the expensive furnishings in her office, the thick mauve carpet, the panoramic view of Seattle's skyline from her corner office. Everything a girl could want.

Except Marnie didn't want any of it. She didn't want the forced smiles of the staff, she didn't want the knowing glances in the coffee room, and she especially didn't want the engraved brass nameplate that read: MARNIE MONTGOMERY, PUBLIC RELATIONS. It could just as well have read: VICTOR'S DAUGHTER. The people who worked “for her” in her department could function well without her. Victor had seen to that.

She tossed her pen into her empty In basket. Was it ever full? Were there ever papers and messages overflowing onto the desk? Did she ever have to put in extra hours? Did she even have to come back from lunch? No, no, no and no!

A nest of butterflies erupted into flight in her stomach at the thought of what she had to do. Rounding the desk she found a piece of letterhead, and rather than have her secretary type her letter of resignation she started writing it out in long hand.

How did one quit being a daughter? she wondered, her brow puckering as she chewed on the end of her pen.

How did she tell a loving father, who had tried all his life to do everything for her, that she felt suffocated?

How could she explain that she had to do something on her own, become her own person, live her own life?

Absurdly, she felt an urge to break down and cry tears of frustration, but because that was exactly what the weaker, dependent Marnie would have done, she gritted
her teeth, refused to shed one lousy tear and started writing again in quick, sure strokes.

She couldn't quit being Victor's daughter, but she sure as hell could quit being dependent upon him.

A
DAM
D
RAKE FELT
the skeptical gaze of every man who sat around the polished table. They'd listened to him, scanned the thick sheaf of papers that was his proposal and leaned back in their chairs, without questions but exchanging knowing glances.

The three men in the room were potential investors from California, men who, so far, hadn't turned him down. Yet. However, Adam knew they each had doubts about his proposalâand concerns about Adam himself. He didn't blame them. His reputation was more than a little tarnished.

It was surprising that these investors had stuck around this long.

The lawyer, Brodie, reached into his pocket for a fresh pack of cigarettes. It seemed to take forever for the cellophane to drop onto the table. “I think I can speak for my associates,” he said, looking to the other two men and receiving quick nods of approval. “We like the idea of expanding to Seattle, but we've got some reservations.”

“This wouldn't be an expansion,” Adam reminded the smooth man in the expensive suit. This was a point they'd haggled over before. “I'll own the majority of the hotel. Your capital will be returned, with interest in the amount specified in ten years.” He flipped to page six of his proposal and slid it across the table.

Brodie lit up, scanned the neatly typed paragraphs, then flipped through the remaining pages of the contract. He
shot a stream of smoke out of the corner of his mouth. “Right, right,” he said thoughtfully. “But for the next ten years we would be part owners of
your
hotel.”

“That's right,” Adam replied, managing a tense smile. God, he hated this kind of politics. Depending upon other people, wealthy men, to finance his business operation. The thought of being tied to anyone bothered him. That was his problem. Bucking authority. Refusing to bend to the power of the almighty dollar.

So why was he here?

Because he had no choice. Victor Montgomery had seen to that.

At the thought of Montgomery and especially the lowlifes who worked for him, Adam's blood boiled for revenge. He forced his thoughts back to the present.

Brodie, eyeing him still, thumped on the contract with one manicured finger. “This looks good, Drake. Only a couple of clauses to reword, but what's really bothering meâ” he blew more smoke to the ceiling and squinted at Adam, sizing him up for the thousandth time “âis what happened at Montgomery Inns last yearâ¦”

There it was. The noose again. The rope that would strangle him.

Adam felt the tension in the room.
Be cool,
he told himself, not showing a flicker of emotion though the sweat was running down his back and his nerves were strung tight as piano wire. “I was never charged with embezzling,” he said evenly. His eyes moved from one man to the next.

“But Montgomery never hired you back,” a tiny, apprehensive man sitting to Brodie's left, Bill Peterson, interjected. Behind glasses as thick as the bottom of a soda bottle, Peterson's nervous gaze shifted to each of the other men around the table.

“I didn't want to go back,” Adam stated. That much
was true. He'd never work for a snake like Montgomery again, though he itched to know who had set him up. The memory was still painful. Once, he'd respected Victor Montgomery and he'd thought the older man had felt the same for him.
Stupid,
he chided himself silently. Victor had shown his true colors and fired Adam swiftly, pressing charges against him, then, when there was no indictment, sending a severance check to him through his lawyerâ
through his damned lawyer!
Victor hadn't even had the guts to face Adam himself. Only the lawyer had been witness to Adam's wrath and stared in uncomfortable silence as Adam had ripped up the check and tossed the confetti-like scraps into the air.

Brodie's voice brought him back to the present. “Look, Drake, before we go into direct competition with Victor Montgomery, I think we should clear this matter up. The way I hear it, there wasn't evidence enough to indict you, and yet the money that was skimmed off the Puget West project was never located.”

The collar around Adam's neck felt tight, the blood thundered through his veins. The money had just vanished. No amount of going over the books had uncovered the missing cash. And in that respect, he was, as project coordinator, responsible.

“That's what we don't understand,” Peterson said, while the third partner, a silent man with flat features, said nothing. “There should have been a trail. How could anyone have walked away withâwhat was it? Half a million dollars?”

Adam nodded tightly, though he hoped his expression was calm. “Five hundred sixty-three thousand and change.”

“That must have taken some doing,” Brodie said, stuffing his copy of the proposal into his briefcase.

Brodie's brows jerked up as he jabbed out his cigarette in the hotel ashtray. Apparently he didn't believe Adam. “You have to understand our position. We can't very well hand over several million dollars until we're absolutely certain that what happened over at Montgomery Inns won't happen to us.” He offered Adam a regretful smile. “If you could ever clear up exactly what happened over there, then maybe we could talk business. In the meantime, I don't think we have a deal.”

No Denying You by Sydney Landon
House of Glass by Sophie Littlefield
A Matter of Taste (Men of the Capital #2) by Cara Nelson
Broken Vision by J.A. Clarke
War by Edward Cline
Remembered by Tamera Alexander
No Strings Attached by Kate Angell
The Unwilling Earl by Audrey Harrison
The Girl in the Gatehouse by Julie Klassen
Caught Bread Handed by Ellie Alexander
Our partner