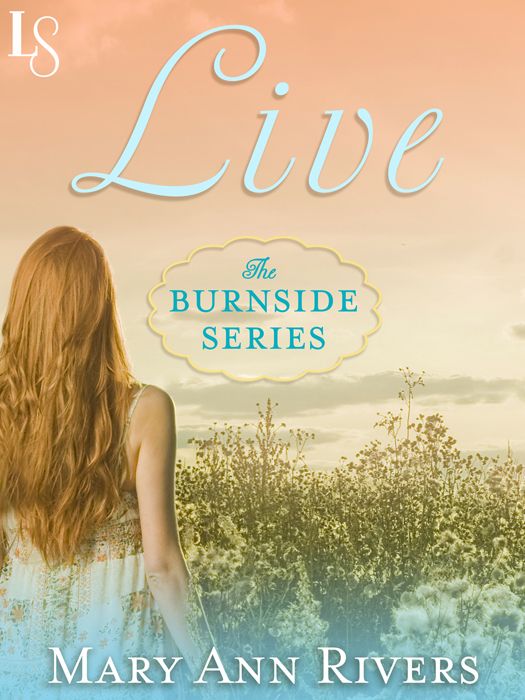 Live
is a work of fiction. Names, places, and incidents either are products of the author’s imagination or are used fictitiously.

LOVESWEPT and colophon are trademarks of Random House LLC.

Excerpt from
The Story Guy

Privately, she called him The Woodcarver.

Which, very strictly, he
was
. Or at least, she had actually seen him carving wood, and talking to other people about carved wood, specifically the carved-wood panels and decorations that were under restoration in the atrium of the library.

Even more painful—if pain was a sweet ache that felt good when you worried and pressed at it—she walked by his work site every single day.

As close as she dared without his noticing.

She loved beautiful men, had known this since high school when she started watching a certain lacrosse captain lope around campus, the sun glinting off his golden arm hair like he was, well, made of gold. Warm gold. Gold that got gold-er and more liquid the more she watched him move. She particularly remembered the way he shoved his shaggy bangs away from his eyes, impatient, with a little bend in his knuckles as he raked his fingers through the sun-streaky mess of it.

Des had spun many fantasies about that lacrosse captain. Some that surprised her with their new and delicious accuracy. She could never work out how to go to a game and explain to her sister and brothers a reason for her sudden interest in lacrosse, but her best friend, Lacey, would lean against the chain-link fence surrounding the practice field with her, after school, and help her break down his attributes in increasing detail. The trouble came when her history teacher, Mrs. Logan, paired her with him on a presentation project.

It started well, Des thought, though perhaps her rapid chattering about the executive branch of the government had been a little manic. But who knew that this close up he would smell so
good
?

“So, are you like a genius or something?” he had said, propping his beautiful head on his hand.

Des was flattered, overjoyed that her extemporaneous political speech had so impressed him. “No, not a genius.” She laughed.

“Why did you think I was twelve?”

And then his eyes had drifted down, to where Des had her arms crossed over her, well,
chest
, while he answered, “No reason.”

Des crossed her arms over her chest, reflexively, just remembering the gut-sink of it.

The Woodcarver was a very, very good-looking man, and had the additional kryptonite of having some kind of accent that curled all up in her ears, which always seemed busy trying to overhear him. Des didn’t know what kind of accent, it sounded sort of British, but there was a long and muffled drawl in his vowels and a short burr to all of his
r
’s.

Not that he had ever said anything to
her
, specifically, but the printing carrel where she had to work was adjacent to the circulation desk, which was across from the big marble-and-oak atrium where
he’d
worked for the last two months with a small crew. At first, she didn’t notice him at all because the whole crew wore coveralls and face masks as they disassembled the panels from the walls. And there were often tarps and plastic sheeting protecting the area.

Once all the panels were down, though, tables were set up, and The Woodcarver and his crew worked almost silently, with hand tools. She remembered the morning she had walked past the crew when the tarps and plastic had been taken down and they were in their street clothes, and she saw him, for the first time.

He had been in profile, marking a piece of bright, new wood with a pencil.

He didn’t even look over when one of his crew had to come help her pick up everything that had fallen out of her bag when she tripped on the trailing ends of her sudden lust.

Every day, he wore jeans and heavy shoes, and sometimes a dirty canvas apron over his long-sleeved T-shirts. Des had heard him talk to other patrons and his coworkers and the restoration tour groups. She’s heard him talk enough that she had imagined his lips moving over those long vowels and gruff
r
’s as he impatiently pushed his shirtsleeves back up over his black-haired forearms.

The printing carrel was situated so that her back was to the atrium, which was why Des could stand it at all. Watching him
while
he talked would be too much, she was
certain.

But listening to him, imagining him, his dark eyebrows pulled into a V over his Roman nose, his teeth sunk into his bottom lip, his corded arm bracing his project over his little bench while he worked his chisel—
that
was just a way to get through her morning.

Her fantasies, she figured, were not unlike a worry stone in her pocket, something used to soothe her lower brain with repetitive pleasure while her higher brain did its necessary dirty work.

Des typically worked until noon answering emails, searching the city’s various job-list sites, emailing her résumé, and printing any paperwork she needed for her employment search or general household accounting.

She had been forced to sell her laptop and fancy laser printer about six months ago during the Great Rent Lapse, before she got her first unemployment check. The library wasn’t ideal, but it worked, even if she constantly had to steady her physiological response to the man just behind her.

Today, she had dared to skirt a little closer to the work site than usual, feigning interest in the new panels that had gone up, carved over heavily with what looked like flowers and vines and birds in a looping pattern.

He was at the worktable, writing or drawing on a huge sheet of paper, so she let herself take him in, how his shoulder worked below his T-shirt as he drew. Like always, in the mornings, he had a mug of tea at the corner of the table, and a shaft of light caught the scrolls of steam and the tight curls and twists of dark hair at his nape as if the sunbeam were lovingly comparing the prettiness of each to the other.

Walking slowly, she watched how whatever he was doing on the paper made his brow furrow into a line that stopped just above that strong nose. How his wrist looked, working the pencil, banking it.

He was left-handed, and she loved how it made even the surety of his strokes on the paper seem a little awkward.

He set the pencil down, still looking at what he had drawn, and grabbed his mug for a long sip, tugging at the tea tag sort of absently. And why was that sexy, exactly?

She made herself look away and scurried to her station.

She started with her email, her stomach tight since she had just interviewed yesterday. There had been a lot of interviews in the last six months. A lot of postinterview emails that made her stomach hurt, made her wonder if the last person on earth to believe she had something to contribute to society was her former boss, who had hired her right after college graduation. And even he had laid her off before the ink had dried on her fifth perfect annual review.

Oh
. She squeezed her eyes shut. It was there. And now she knew, after all the job searches and failed interviews, that an email was never good news. Like her former childhood babysitter and current landlady, Betty, said,
They want you, they tell you, right off
.

Because Des was to that point where nearly everyone in her neighborhood had offered an opinion on her unemployment and job search. Trading war stories on front porches with the other economy veterans wasn’t so bad, but when Rennie, the kid
she
used to babysit and now drove to high school every morning, had started awkwardly offering her gas money, it was Too. Much.

At first, in those early days of sudden unemployment, she had secretly enjoyed herself. She’d had no reason to think finding a new job would be any different than the three or so times before she had done so. If it wasn’t a vacation, it was at least time to reassess what it was she really wanted.

Her brothers and sister had always known what they wanted.

How to really
live
, it seemed to Des.

Her older brother, Sam, was a doctor, the oldest of all four of them, and if he had been serious and overly anxious every single day of his entire life and seemed to actually believe he knew how
better
, it had worked for him for thirty-seven years and he made it clear he was never changing.

Sarah was Sarah and defied definition, was shameless and anything but a mild, wise, older sister, and whether it was roller derbies or vegan catering or guide-dog training or band-poster design, she was always doing what she wanted. Exactly. With so much passion it always seemed that whatever she was doing, it was her
calling
.

And PJ—or really, Paul, as he wanted to be called now that he didn’t wear light-up shoes and smell like Cheerios or get called “the baby”—played the cello in the Lakefield Symphony, and at twenty-one was the youngest musician they had ever hired. His talent was sort of baffling to all of them; not one of them could even sing. But he
somehow
knew
. He saw inside himself clearly enough when he was seven years old to ask for
cello
lessons, when none of them had even been offered a piano lesson from Mrs. Delaney down the street.

After she got laid off six months ago, when Des looked down inside herself, she mostly saw time. Empty time.

But not how to live.

The people most closely related to her saw their entire lives inside themselves.

Right before she lost her job, she had also lost her father to his long battle with lung cancer. She had balanced fifty-hour weeks at work with caring for him, sitting with him in the hospital, then in hospice.

Her brothers and sister lived in the same working-class neighborhood they’d all been born in, and they were there too, with their dad, but the only way Des knew how to help, was to, well,
help
.

Wicked by Sasha White
First and Last by Rachael Duncan
1 Shore Excursion by Marie Moore
Edge of the Orison by Iain Sinclair
Small Man in a Book by Brydon, Rob
The Intern Serials: Complete Box Set by Brooke Cumberland, Rogena Mitchell-Jones, Sommer Stein
The Mummy or Ramses the Damned by Anne Rice
Righteous Indignation: Excuse Me While I Save the World! by Andrew Breitbart
Ocean of Dust by Graeme Ing
It's Only Temporary by Sally Warner
Our partner