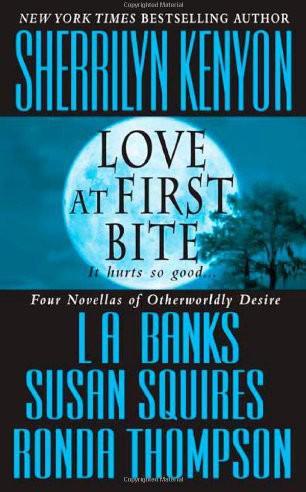 From Love at First Bite Anthology

"Rufford's done it! The bitch goddess is dead." Admiral Groton, in charge of the government's intelligence effort, waved a sheet of foolscap written in a masculine hand. He stood in front of huge windows that gave onto a rainy Whitehall Lane lined with the offices of the most powerful government in the world.

Relief washed over Major Vernon Davis Ware, Davie to his intimates. It was worth putting off his appointment with Miss Fairfield just to hear those welcome words. An image of Asharti rose to his mind, impossibly beautiful, her eyes gone red and deadly, her breasts brushing his bare chest… He would not think of her. He had banished those dreadful weeks in El Golea when he was in her power from his memory. Now she was dead and all he wanted was a normal life. He was going to offer for Miss Emma Fairfield today and become a government servant in some boring diplomatic post with an intelligent and beautiful wife, if she would have him. And, God willing, he'd sire a family.

"Who do you think penned the letter?" The only other occupant of the room was the Lord High Chancellor of England. The skin over the Chancellor's jowls was paper-thin and spotted with age. "Rufford has averted a world cataclysm."

The Admiral cleared his throat and frowned. His face, tanned from years at sea, had deep creases around his mouth. He was no stranger to worry. "The disaster is not yet averted."

"But the vampire woman is dead." It was unbecoming in a Lord High Chancellor to pout, but so it was.

The Admiral sighed. "Remember, Your Lordship, that these vampires have something in their blood… what did you say it was, Ware?"

Davie cleared his throat "I'm not sure, sir. I only know its effect, and the fact that it can be passed through exchanging blood."

"Monsters," the Chancellor muttered under his breath. "They're monsters."

"Are plague victims all monsters?" Davie asked, in spite of the fact that he was questioning the Lord High Chancellor of England.

"If the world is saved, Rufford will have saved it."

"The point is they can infect humans and make them vampire, too," the Admiral reminded his superior. "Asharti made an army of them. We're not out of the woods yet."

"But see here, Groton," the Chancellor protested. "You said Rufford and others… like him… they're on a campaign to wipe out her army. If he can kill Asharti, surely they can track down the ones who are newly made. You said they weren't as strong at first, didn't you, Ware?"

"Yes, I did, but they are still stronger than humans. And like a plague, they can spread." Davie managed a lopsided grin. "I wouldn't want to be in North Africa for a while."

The Admiral cleared his throat. "Yes, well. Rufford has requested the assistance of the British government. And he specifically asked for you."

It was Davie's turn to frown. His stomach churned. "What do you mean?" He glanced from one to the other. The Chancellor wouldn't meet his eyes but paced to the window. Rain battered the panes in curtains. All his years sat upon the Chancellor's shoulders.

The Admiral had rather more courage. He fixed Davie with a steely stare. "We're to provide provisions and equipment. But their campaign requires someone who can move about in daylight to provide logistics. He wants someone who already knows what they are."

"No." Every fiber rebelled against returning to North Africa. "I'm going to make an offer of marriage today."

"Our future depends upon the outcome of this struggle, Ware." The Chancellor sounded almost remote. He clasped his hands behind his back as he stared at the street below. "He didn't ask for armies or navies. He didn't ask for Wellington. He asked only for you."

Damn Rufford! "What happens in North Africa does not concern us." He couldn't go back there for so many reasons, Miss Fairfield for one and memories of Asharti for another.

"Really?" The Admiral's acid tone cut through Davie's excuses. "And is that why you demanded our fastest cutter to take Rufford to Casablanca in the first place? Surely you thought the consequence was important to England, since we mustered every resource to send him on what we thought was a suicide mission. He went. He prevailed. And now he asks for our help, and yours."

"You've got a box full of medals somewhere even if you don't choose to wear them in the drawing rooms of London." The Chancellor turned back to Davie. "After Waterloo you joined the diplomatic corps, so you've served your country several times.

This is our most critical hour, not only as Englishmen, but as humans. Don't fail us now."

"We need to know what's going on down there, Ware!" The Admiral punched his fist into his other palm. "Of course we want battlefield dispatches, but we must keep an eye on Rufford and his kind as well. Do you think I sleep well at night knowing there are monsters living among us? Whatever you may say about them being victims, they're immortal, for Christ's sake, or nearly!

They're unnaturally strong. They can disappear into thin air and they drink human blood. Perhaps worst of all, they can control minds. And for all his courage and his service to date, Ian Rufford is one of them. We need intelligence, Ware! What are their vulnerabilities? Who directs them?" He strode forward, his pale gray eyes boring into Davie. "So far, the only way to subdue one of them is with another one. Not something that gives me comfort, Ware."

So, they wanted to help Rufford but spy on him into the bargain. Well, Davie wanted none of it. "I won't go back there." He made his voice as flat as possible. "Rufford doesn't need my help. Good day, gentlemen." He turned on his heel as they exchanged glances.

"We'll be in touch," the Chancellor called after him.

Damn Rufford
! Davie thought again as he pushed out into Whitehall Lane. He paused in the pillared portico of the Admiralty, only half-aware that the rain had stopped. He stared at the gaudy squadron of Horse Guards that trooped down the street.

It
was
that important that Asharti's minions be stopped. Only Rufford and his kind could do it. Did he know for certain Rufford
didn't
need his help to do the job? The man was true at the center, though Asharti had made him into a monster who drank human blood. If he trusted Davie enough to ask him for help… Davie sucked in the wet March air and slowly let it out. He remembered Rufford's own moment of decision, when he had known he would return to North Africa to face Asharti… Davie had seen the despair in Rufford's eyes, the fear, and the certainty. Davie's dream of stability dissolved into memories of his time in El Golea…

He shouldn't go to her. He knew that, somewhere deep inside himself. The jasmine that dripped from the pergola
drenched the night in a flowery musk, but it could not obscure the scent of cinnamon and something else, exotic and
sweet, that she exuded. He could barely see her in the darkness of the British compound courtyard. The thick-walled
rooms that surrounded it were empty now. She had killed the legation, drained them of blood. They, at least, were at
peace.

Only he was left. Why had she spared him? So he could serve her, night after night? He staggered out into the
courtyard. No light shone from the surrounding windows, though her creatures were there, drinking and eating in the
darkness. He heard their murmuring voices. He had nothing to fear from them. They dared not molest him. That was
left to her. His genitals grew heavy with need. Revulsion washed over him. She commanded and his body obeyed.

The stars lit the night along with the sliver of a smirking moon. Ahead, her lithe form was a darker smear of black
against the night. Though her back was turned, she knew he was there. Her hair, heavy and dark, cascaded down her
back over the diaphanous fabric that barely concealed her form. Her garment might look gray in the darkness, but he
would wager it was red.

He touched her shoulder. Her flesh was hot with energy. She turned. Her beauty struck him like a blow, as always. Her
dark eyes, lined with kohl, glowed red. All thought of escape vanished. He knelt, knees wide, as she required. He was
erect and ready. She bent over him and cupped his jaw.

He lifted his lips to her nipple and suckled through the sheer fabric.

Davie blinked against the spatter of raindrops as a last shower flapped against the paving stones of the Admiralty court. The shame of that time stayed with him even as the memories drained away. From the distance of London, and three months' time, he knew why he'd been left alive to serve and suffer. He alone had known where Rufford was. Rufford was the only one with a drop of the ancient blood, the only one who had a chance to best her. Davie had betrayed Rufford to her. He swallowed and Whitehall blurred before his eyes. It must be the rain. She could compel… anything—information, sexual service,
anything
.

Davie's jaw worked. She had sent him with a letter all the way to England, threatening all Rufford loved, knowing that would bring the man back to the North African desert, and into her clutches once again. Davie's ability to act as messenger was all that saved him from Asharti.

What did he not owe Rufford for that betrayal?

And he
had
sworn service to his country. What greater need could there ever be? No matter that he would be plunging into the middle of a war between what the world called monsters. His need for normalcy after his time with Asharti did not signify.

His shoulders sagged as he knew what he would do. Fear trembled down his spine. He'd thought he'd left behind the cursed sand of the North African desert forever. He was wrong.

And now he must disappoint the woman he loved and blight all chance for happiness.

Emma Fairfield sat in the breakfast room that looked out over the tiny back garden at Fairfield House in Grosvenor Square. The room was cheerful, its pale yellow walls and light Chippendale furniture a contrast with the bleak March rain that beat against the arched windows. Emma was arranging roses in a crystal vase. She managed to grow roses most of the year in the fourth-floor solarium, oranges, too, and peonies brought back from China by her great-uncle. He had been a true adventurer, the black sheep of the family. He was a rebel. Was that why she always liked him best? This bouquet was multicolored, some blossoms well opened, some mere buds. Creamy peach and white mixed with bloodred and pale pink in chaotic abundance.

"I thought we were going to receive a visit from that young man of yours," her brother said as he snapped the
London Mail
into new folds. They liked to sit here of an afternoon, rather than in the larger, formal rooms at the front of the house. Her brother was some ten years older than she was. He had never married. He never would.

"You might call him by name, Richard," she said calmly, clipping a stem with a small garden shears. "We've known Davie Ware since we were children. And he isn't mine. One doesn't own young men. He isn't even that young."

"Neither are you, Emma." Richard drew his handsome brows together and peered at her over the paper. "You'll be on the shelf if you ain't careful, girl."

"Three seasons isn't the end of the world, Brother."