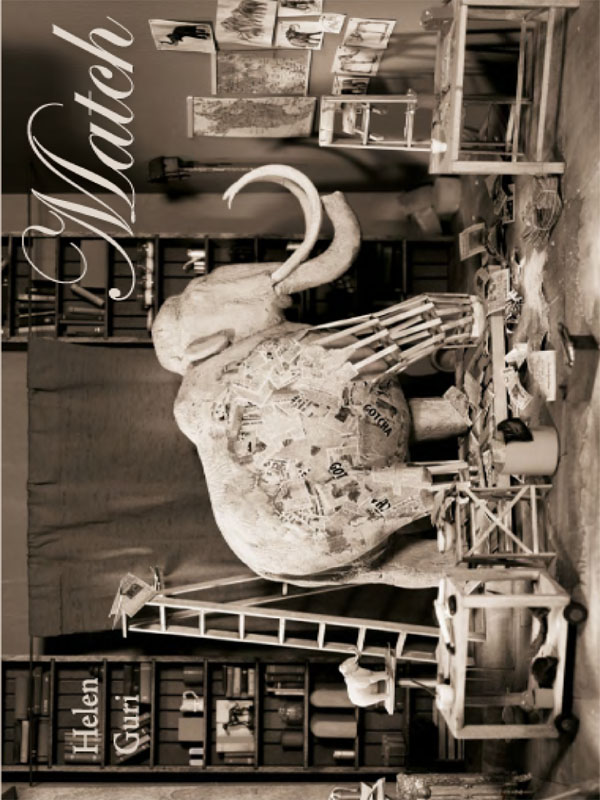 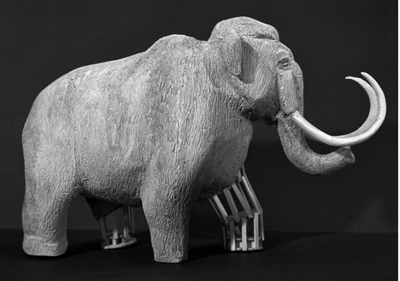 Light gallops in, signalling the start of the apocalypse.
Soon it’s beard to beard with itself like white bison,
as thick on the floorboards as the train of a woollen dress.

For one spooled second everything glows,
then the world starts tipping from its crate.

My mother, who knew in her wicker-backed certainty
that the wedding would be a disaster,
now stands balanced on one ear in the impossible gravity
and is vindicated, backwards: the disaster is a wedding –

the foundation cleaves, cat’s cradle, to an aisle
as the ground unravels.
There I go down the centre to the white
and everyone else after.

In times like these, which cannot even be called dark,
Uncle Charlie makes the best of things.
He serves up saints roasted with onions
from his backyard convection oven,
whose helicoid heat plays songbirds on loop.

The bridesmaids have all watched too many zombie movies,
shriek in chorus, hike their dresses to wade
across the newly liquid river of the atmosphere.
Even the silver lining is blinding.

One
In which I am largely unrequited
ALMANAC

High on the hunch of the rattlesnaking slide, she bet I was the kind to piss the bed. Howled it out of the blue as she humped a sun-blind wave, like birds squall portents as they fly from power poles. The brick eardrum of the August schoolyard cracked.

It was news to me, kid-iotic as I was, poking a stick into an aluminum can, imagining I was a T. Rex or a saint. Bits of nature, gulls, grasshoppers, stalled cock-eared in the wake of her yodel, the lightning rods of their listening – would she have names for them too?

I’d never spoken to Ella even once. To be called anything at all was a prickling kind of honour, a drip of golden water. What a newt must feel dipping its toes in the river.

Blunt-soft as a hot-tub jet, her coronet lungs and cardinal skirt gusts –
bedwetter
, she belled over the edge. A bolt of warmth pleated like weather between us.

Meanwhile my real name, Robert, the eight compass points of polite distance, every woman in my kingdom-come blew in like fresh figments from the horizon.

Empty nester – my Kinder eggs hatched
one by one into the thumb-tarnished world:
an ex-wife, then peck marks of red-breasted predators,
electronic footprints. No kids.
So it’s lucky I loathe a vacuum –
life at home is teeming.

O census-takers of the five-to-nine,
see how I slip through a cloud-glass pane
and seal it like a wheel-and-deal,
empty my pockets for the throb of red fruits
in a hothouse of off-hours.
Where my libido sends its sweet-pea runners up the walls,
and by sundown even my plantar wart’s in flower.

Tonight’s to-do of miracles
under the clear big top:
transmute self to pasture,
turn the TV loose to graze.
Let cross-breezes play my penny-flute holes,
UFOs tortoise me in polka-dot code.
While it sleeps, nip the lexicon’s wings.

A personal ad lobbed like a rock into dusk
gives edge to my pastoral sprawl:
Looking for a top-dresser in a biplane,
a Jeannie Epper pressure-hoser
of pheromone fairy dust,
glass-ceiling trasher
a stem’s breadth from crack-and-burn.

THE BODY SPECTACULAR: AN ATLAS FOR STUDENTS, 2ND ED.

It isn’t I who peers at the draft of this atlas through beer goggles,
inking it like a patient for quackery,
but a stumbling double, dead ringer with a widget set
of slashes, hyphens, dashes
en
and
em
mincemeating the margins, hinterlands.

Exactly the kind of guy you wouldn’t want operating
on you or heavy machinery,
he skinny-dips his gloveless thumbs
in the ebb and pulse of copy, stutters to the moat:
This won’t hurt a bit.

Meanwhile, languidly, with subtle difference, I
illuminate the consonants of
coccyx
on diagrams of the female pelvis
in my turret with the bird’s-eye view,

just as Greta the Publicist, Dragoness-in-Chief,
interrogates the hair on our neck of the woods:
‘Seeing anyone these days, Robert?’

If I could split, I would –
From the neck down,
it’s all machine
, claims a codger
in a box on a dog-eared page.
Siege ladder
, I could footnote,
brew a pot of black gold to the smoke point

and sip, and drip on her slingback shoe,
slug another gulp of my Hypocrite Oath:
creosote, no sugar.

THE SINGLE LIFE OF LAVA

My lines grow more shameless with time,
I’m the proverbial bulldozer.
Tell me, do you come here
to bathe in pure Gewürztraminer,
and, days later, show the tub ring to your mother?
Mine’s buried three leagues upstream
from the one we’re in now.
You seem a little out of it too –

but by this age, let’s be honest,
we’ve both swallowed villages.
You’d think I’d stop apologizing
and level the field.

Sure, I agree it could never work anyway,
what with your absence of interest
in my bronto-thesaurus, the brass thumbtacks
of my private whirlpool.
The myth of our obsolescence is hardening.
There may not even be time enough
to fling rotini between the bucktoothed canyons,
melt lettuce to lace negligee,
and depart like racing slugs

from each other’s cracked lips.
And I just remembered my mortal fear
of addressing the opposite sex –
it has to do with my aversion
to upslopes, my latent acne of the soul.

I’ll be off now to my hole under the hill.
But if it’s any consolation, I’ll treasure
the
might as well
you seem to cough
to your palm as I go.
Seismographs will sense
how I scorch all the way home
on my own steam at the very idea.

All breeze stalls mid-cough,
so the fumes of coffee

floss the room, and the plume
of Greta’s voice on the phone

steadies like a feather.
I know her voice is the shape of a wishbone

while intrepid physicians mapped
a diagram of chords

in what could have been anyone’s
gorge
.

And Brian drops his full mug of coffee from a height:
Shit-whoops-damn!
Hot white splinters
in a stimulant tsunami.

But he doesn’t really mind –
his bending a chance to ogle Greta’s ankles,
scooting toward him like brooms.

She kneels to read the inkblots
on his jeans, while he gleans advice on their removal.

Everyone agrees it’s no big deal.
The incident bleeds into the ledger
of bloopers, office gossip,
which runs on tit-for-tat to infinity:
Last week Greta made out, as by accident,
with a pucker not her husband’s,
and Brian plucked a nylon string itch
with the publisher’s daughter.
(It was her funnel-shaped breasts.
Alcoves, we are meant to imagine,
like a lick of Manchego cheese.)

But something funny is happening to the puddle on the floor.
Like a dropped object returned to its pocket,
or a skunk turning to light at the spine as it streaks
across lawn, the dark liquid vanishes,
resets to an invisible web of tripwires throughout the room.

I keep very still, hold my place
like something nearly caught by spiders,
or like the would-be thief
of a large and opulent piece of art.

Let me be perfectly clear.
It is not a triangle I mean but
three dots.

Near the dissolving edge of the garden party,
a tulip dives up slowly
from below ground, against gravity.
It’s like a little-watched sporting event on rewind
at a bar no one goes to, those pink-tinged feet
a single bullet bound for heaven
while the whole remainder of the universe swims on,
undisturbed, in its habitual direction.

Now someone presses ‘pause.’
Stuck upside-down, a foot shy
of solid ground and wearing nothing
but the wind’s leotard,
the tulip must turn her feet into a head,
her mind into toes.

She begins by rooting her fingers
under the heavy metal cabinet of the earth.
Her torso is as spare as the twine between
two tin cans. Now the other end is talking,
or trying to. Listen, and you might barely hear
the arches of her feet
rehearse the embouchures of speech
surreptitiously to the air.

You are right to be suspicious.
By the time her eyesight rights itself,
she’ll be a periscope spying for the underground.

She’s building a subterranean fortress
lit by multiplying bulbs and
powered solely by the stationary cyclone
of her mental gymnastics.

The breeze is her own personal brand
of highly flammable hairspray.

She’s shrewdly packed her appetite
in one of those green tortoiseshell valises.

When the party goes shits-up, her getaway
car will come on tiptoe.

In the Heat of the Night by John Ball
Furnace 3 - Death Sentence by Alexander Gordon Smith
The Book of Revelation by Rupert Thomson
Rebel's Baby by Lauren Hunt
An Unholy Mission by Judith Campbell
Swansong by Christo, Rose
Mara, Daughter of the Nile by McGraw, Eloise Jarvis
High Stakes by Waltz, Vanessa
Traded for Love by Michelle Hughes, Dahlia Salvatore
Emma by Katie Blu
Our partner