Maybe This Time (The Educators Book 3) 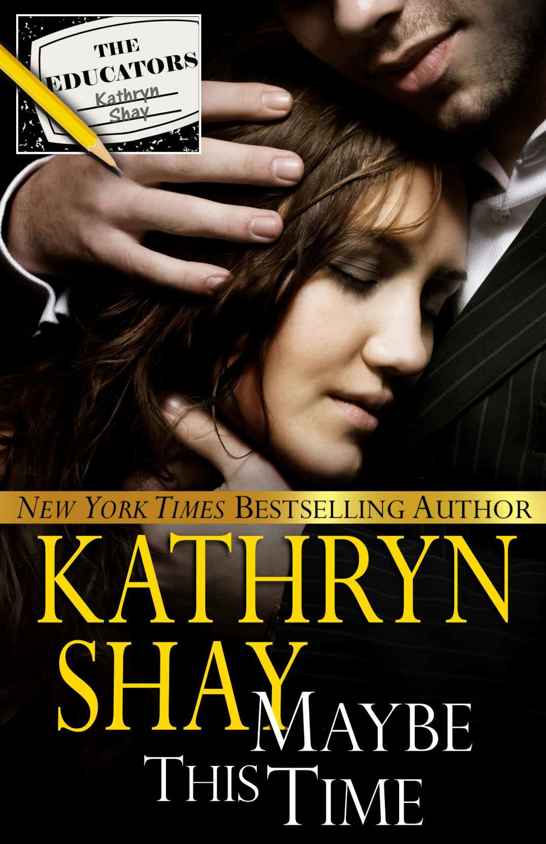 Praise for MAYBE THIS TIME

"Kathryn Shay clearly has lived the life of a teacher -a good teacher! As a former teacher myself I loved the insights the young female lead character in MAYBE THIS TIME had regarding her students, and the way teaching was her life - not just her job. And the love scenes burned with excitement! Great job Ms. Shay!!" A Reader

“Shay uses her own extensive background as a high-school teacher to create believable teenagers.”
The Romance Reader

This ebook is licensed for your personal enjoyment only. This ebook may not be re-sold or given away to other people. If you would like to share this book with another person, please purchase an additional copy for each person. If you’re reading this book and did not purchase it, or it was not purchased for your use only, then please return to the bookseller and purchase your own copy. Thank you for respecting the hard work of this author.

Discover other titles by Kathryn Shay

Nothing More To Lose

Someone To Believe In

A Price Worth Paying

A Place to Belong

Cop of the Year

“Flight 451 from Atlanta to Rochester has been delayed two hours. Repeat…”

Delaney Dawson looked up from her journal and said, “Oh, no! Not again.”

Across the aisle, she heard, “Son-of-a-bitch.”

The curse came from the stranger sitting in one of the seats facing her at the airport gate. She’d noticed him the first time her plane to upstate New York had been delayed and his response had indicated he was booked on it, too. When he gave her a commiserating smile, she noticed the dimples in his cheeks. His chestnut colored hair was messy from having run his hands through.

“Think we’ll get out today?” she asked pleasantly.

“Who knows? Rochester’s weather is absurdly unpredictable.” He stood and took out his cell phone. “I have to make a call.”

Idly, Delaney wondered if she should phone somebody. But other than Lisa, whose wedding she’d attended yesterday and who was now in Hawaii, no one worried about her. For as long as Delaney could remember, except for that one friend, she’d been alone in the world.

She’d be missed at school, of course, where she taught English, but she’d wait to call in until she knew if she was getting out of Atlanta.

Turning back to her journal, she began to write again. Earlier, she’d been musing about her life, feeling nostalgic that Lisa was married, having mixed feelings about turning thirty tomorrow.

You’re not alone now. You still have Lisa. And people at the high school have been nice to you. But mostly, you have all those kids who are counting on you. They love you in their own way.

She fingered the parchment the pages were made of, thinking of Stephanie Grayson specifically, who would miss her if she didn’t show up for work tomorrow morning. Though the girl had let herself get close to Delaney, Steph seemed to have a grudge against the whole world. Truth be told, she reminded Delaney of herself at that age.

Again, she wrote, as she often did, about one of her students:

I need to help Steph more. I have to get her to talk to me about her frustration, her alienation, and mostly, though the kid doesn’t know it, her longing to be a part of something.

So involved in thinking about the sophomore student with pink streaks in her hair (like Delaney used to wear) and a tattoo on her back that her parents didn’t know about (Delaney had two) she didn’t see the bundle of energy barreling down the aisle until he smacked right into her. She flailed automatically. Coffee she’d set on the chair next to her went flying onto her white peasant blouse and spattered on her journal. The boy stopped short. When she looked at him, his eyes were round as saucers and his mouth was quivering.

“Jason, oh, dear, Jason what have you done?” The woman who reached them--the very pregnant woman--was obviously chasing after her child. The kid had won.

“No worries,” Delaney told them.

“I’m so sorry. My son is a handful.” The woman fumbled in her purse, took out napkins and offered them to Delaney. Knowing he’d goofed up, Jason turned and buried his face in his mom’s skirt. She soothed his hair down and added, “He broke away from me. I can’t keep up with him.” She placed a protective hand on her belly. “These days anyway.”

“No harm done. The blouse will wash.” Delaney set the journal aside. “Really, I’m fine.”

Giving the mother a rueful smile, Delaney shook her head. She’d ruined plenty of journals in her lifetime of writing by throwing them onto the floor so hard she broke the spine, spilling Jack Daniels on the pages, even burning one. “No need.”

She stood and picked up her carry-on. “I’ll go change.”

She pointed to the boy. “Give your mom a break, kid. No more running away from her.”

Once in the ladies room, Delaney changed into a purple long sleeved T-shirt. Placing the journal in a plastic bag, she headed out of the bathroom and practically bumped into someone—who was holding two cups of coffee. It was the guy with the dimples. “Oh!”

“I was on my way back from making a call and saw what happened. Here…” He held out a cup to her. “…it’s black but I brought cream and sugar.”

She was flustered, which didn’t happen often. “Um, thanks. That’s so sweet.”

“Hey, anybody who was that kind after being drowned with coffee deserves a reward.”

Up close, she could see his eyes weren’t the light brown she’d thought before. They were more green. And he smelled wonderful, like a man who’d just showered.

“I have bad news. While you were in there, the flight’s been delayed another hour. My guess is it’ll get canceled.”

Damn it. She wouldn’t make it to school tomorrow and had a lot planned for the day. “I’ll miss work.”

His expression was filled with concern. “This is the worst possible time for me to be stranded.” He checked his watch. “No use stewing about it. I guess I’ll go get lunch. Want to come?”

“Um…I…” What the hell, why not? The airport was a public place and she was bored and he was awesome looking.

Though not quite her type, she thought as they made their way to the food court. He wore jeans, sure, but they were neatly pressed and expensive. His shirt was a starched blue oxford under his navy cashmere sports coat. The outfit probably cost more than her blouse, jeans, shoes, bag, boots and the black leather jacket she carried combined.

They reached the food court and stopped to peruse the menu of a grill place. From the hotdog stand next to them, she heard, “Don’t wanna have milk.” It was Jason, the little boy who’d run into her.

Gage said, “It’s going to be a long day for that poor woman.”

A tantrum was coming. Delaney worked in a day care trying to put herself through state college and she recognized the signs.

Suddenly, Jason started to bawl. The woman seemed on the verge of tears. Delaney strode over to them and squatted before the kid. “Hey there, little man, what’s the matter?”

Delaney grasped his shoulders firmly. “Listen, buddy. I have something really fun in my bag. If you stop crying, I’ll show you.”

The kid dialed back to a whimper and a few sniffles. “What?”

“Come see.” She straightened. “I’ll take him to a table while you get your food. You can see us from where you are. I’m Delaney and a teacher, by the way. Honest, I’m a good person.”

As she passed Gage, she said, “I’ll have a hotdog, French fries and a coke.”

Leading the boy to a table, they sat down. She fished in her huge black shiny purse and pulled out a pouch.

“My good luck charm.” She opened it and poured several marbles into her hand.

“I love marbles,” the kid said.

“Me, too. Tell you what. If you eat your lunch and drink your milk, and don’t give your mommy any more trouble, when we go back to wait for the plane, I’ll play these with you on the carpet.”

In minutes, Marlene brought food to the table and set the tray down. “Thanks so much.”

Delaney ruffled the child’s hair. “See you back at the gate. And don’t forget you said you’d play with me.”

Delaney glanced around and spotted Gage paying for food. He’d removed his sports coat and she noticed he had a great ass. And wonderful shoulders.

Well, she thought, this is going to be a pleasant interlude.

Gage watched Delaney as he approached the table she’d snagged. There was something about her innate kindness to the mother and child that made him ask her to lunch. She’d helped out a pregnant woman, and he had a soft spot for them. He studied Delaney as he walked toward her. She was medium height and solid, and not his type at all with that wild hair, those skin tight jeans and biker jacket. Still, inside, she was the kind of person he gravitated to.

When he reached her, she said, “Hey. I’m glad you didn’t leave.”

“Nope I liked watching this Good Samaritan help out a pregnant lady.”

He placed her junk food in front of her and set down his grilled chicken sandwich. He had to admit, her food smelled better, especially the red meat. “Here we go.”

“How much do I owe you?” she asked, reaching for her wallet.

“Thanks, I’m not used to being waited on by men.”

He arched a brow. “Really? I can’t imagine why.” He stared past her. “You got a new friend.” She glanced over her shoulder. “He’s making cow eyes at you.”

She laughed. It was a nice laugh, unself-conscious, feminine. “I guess.”

He winked at her. “I can see why he’s so entranced.”

They talked in between bites. She was easy at conversation, but he noticed she shied away from personal topics. They discussed where they’d flown from: she was at a wedding, he’d been on a hellish business trip that he’d been called back from because of problems at home.

“What do you do for a living?” he asked her.

He thought of the teacher giving his daughter grief.

“A lawyer.” He rolled his eyes. “Go ahead with the jokes.”

“What do you teach?”

“English? What kind of law do you practice?”

“Now, corporate. But I worked at Legal Aid early in my life. Actually, I preferred the variety of that kind of law.”

“I might.” She waved a French fry in the air to indicate their surroundings. “You might, too.”

They finished lunch discussing inane topics and when they returned to the gate, there was still no word on the flight home. Gage checked his iPhone and saw the weather in Rochester was getting worse—no surprise there—but he didn’t tell Delaney. Besides, she was sprawled out on the floor, playing marbles with Jason.

When he approached them, the boy looked up. “Hi, mister. My father’s tall like you. He’s in Afghanistan.”

Delaney and Gage exchanged sympathetic glances. No wonder the mother was frazzled. She was sitting in the row opposite them but she seemed to grow more exhausted each minute.