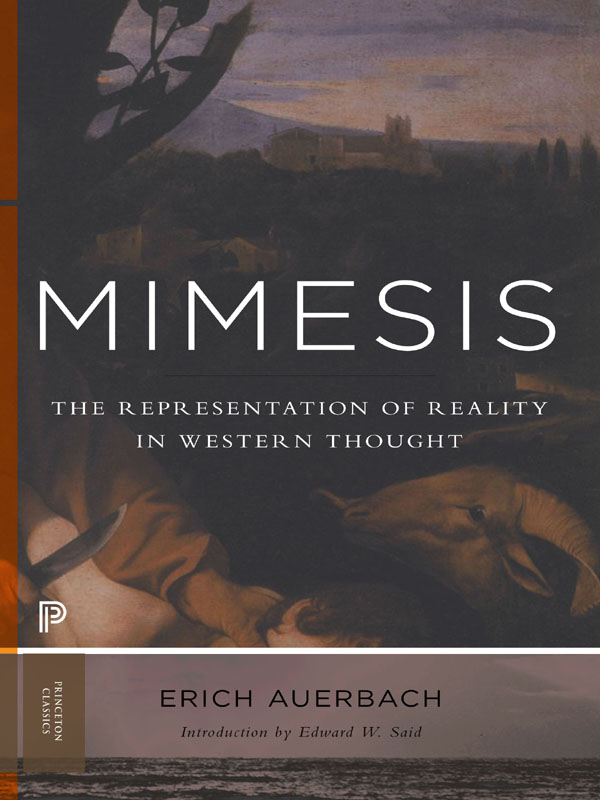 THE REPRESENTATION OF REALITY
IN WESTERN LITERATURE

TRANSLATED FROM THE GERMAN
BY WILLARD R. TRASK

With a new introduction by Edward W. Said

INTRODUCTION TO THE FIFTIETH-ANNIVERSARY EDITION

T
HE
influence and enduring reputation of books of criticism are, for the critics who write them and hope to be read for more than one season, dispiritingly short. Since World War Two the sheer volume of books appearing in English has risen to huge numbers, thus further ensuring if not ephemerality, then a relatively short life and hardly any influence at all. Books of criticism have usually come in waves associated with academic trends, most of which are quickly replaced by successive shifts in taste, fashion, or genuine intellectual discovery. Thus only a small number of books seem perennially present and, by comparison with the vast majority of their counterparts, to have an amazing staying power. Certainly this is true of Erich Auerbach’s magisterial
Mimesis: The Representation of Reality in Western Literature
, published by Princeton University Press exactly fifty years ago in a satisfyingly readable English translation by Willard R. Trask.

As one can immediately judge by its subtitle, Auerbach’s book is by far the largest in scope and ambition out of all the other important critical works of the past half century. Its range covers literary masterpieces from Homer and the Old Testament right through to Virginia Woolf and Marcel Proust, although as Auerbach says apologetically at the end of the book, for reasons of space he had to leave out a great deal of medieval literature as well as some crucial modern writers like Pascal and Baudelaire. He was to treat the former in his last, posthumously published book,
Literary Language and Its Public in Late Latin Antiquity and in the Middle Ages
, the latter in various journals and a collection of his essays,
Scenes from the Drama of European Literature
. In all these works Auerbach preserves the same essayistic style of criticism, beginning each chapter with a long quotation from a specific work cited in the original language, followed immediately by a serviceable translation (German in the original
Mimesis
, first published in Bern in 1946; English in most of his subsequent work), out of which a detailed
explication de texte
unfolds at a leisurely and ruminative pace; this in turns
develops into a set of memorable comments about the relationship between the rhetorical style of the passage and its socio-political context, a feat that Auerbach manages with a minimum of fuss and with virtually no learned references. He explains in the concluding chapter of
Mimesis
that, even had he wanted to, he could not have made use of the available scholarly resources, first of all because he was in wartime Istanbul when the book was written and no Western research libraries were accessible for him to consult, second because had he been able to use references from the extremely voluminous secondary literature, the material would have swamped him and he would never have written the book. Thus along with the primary texts that he had with him, Auerbach relied mainly on memory and what seems like an infallible interpretive skill for elucidating relationships between books and the world they belonged to.

Even in English translation, the hallmark of Auerbach’s style is an unruffled, at times even lofty and supremely calm, tone conveying a combination of quiet erudition allied with an overridingly patient and loving confidence in his mission as scholar and philologist. But who was he, and what sort of background and training did he have that enabled him to produce such work of truly outstanding influence and longevity? By the time
Mimesis
appeared in English he was already sixty-one, the son of a German Jewish family residing in Berlin, the city of his birth in 1892. By all accounts he received a classic Prussian education, graduating from that city’s renowned Französisches Gymnasium, an elite high school where the German and Franco-Latin traditions were brought together in a very special way. He received a doctorate in law from the University of Heidelberg in 1913, and then served in the German army during World War One, after which he abandoned law and earned a doctorate in Romance languages at the University of Greifswald. Geoffrey Green, author of an important book on Auerbach, has speculated that “the violence and horrors” of the war experience may have caused the change in career from legal to literary pursuits, from “the vast, stolid legal institutions of society … to [an investigation of] the distant, shifting patterns of philological studies” (
Literary Criticism and the Structures of History, Erich Auerbach and Leo Spitzer
, Lincoln, University of Nebraska Press, 1982, pp. 20-21).

Between 1923 and 1929, Auerbach held a position at Berlin’s Prussian State Library. It was then that he strengthened his grasp of the philological vocation and produced two major pieces of work, a German translation of Giambattista Vico’s
The New Science
and a seminal monograph
on Dante entitled
Dante als Dichter der irdischen Welt
(when the book appeared in English in 1961 as
Dante, Poet of the Secular World
, the crucial word
irdischen
, or “earthly,” was only partially rendered by the considerably less concrete “secular”). Auerbach’s life-long preoccupation with these two Italian authors underscores the specific and concrete character of his attention, so unlike that of contemporary critics, who prefer what is implicit to what the text actually says.

In the first place, Auerbach’s work is anchored in the tradition of Romance philology, interestingly the study of those literatures deriving from Latin but ideologically unintelligible without the Christian doctrine of Incarnation (and hence of the Roman Church) as well as its secular underpinning in the Holy Roman Empire. An additional factor was the development out of Latin of the various demotic languages, from Provençal to French, Italian, Spanish, etc. Far from being the dry-as-dust academic study of word origins, philology for Auerbach and eminent contemporaries of his, like Karl Vossler, Leo Spitzer, and Ernst Robert Curtius, was in effect immersion in all the available written documents in one or several Romance languages, from numismatics to epigraphy, from stylistics to archival research, from rhetoric and law to an all-embracing working idea of literature that included chronicles, epics, sermons, drama, stories, and essays. Inherently comparative, Romance philology in the early twentieth century derived its main procedural ideas from a principally German tradition of interpretation that begins with the Homeric criticism of Friederich August Wolf (1759-1824), continues through Herman Schleiermacher’s biblical criticism, includes some of the most important works of Nietzsche (who was a classical philologist by profession), and culminates in the often laboriously articulated philosophy of Wilhelm Dilthey.

Dilthey argued that the world of written texts (of which the aesthetic masterwork was the central pillar) belonged to the realm of lived experience (
Erlebnis
), which the interpreter attempted to recover through a combination of erudition and a subjective intuition (
eingefühlen
) of what the inner spirit (
Geist
) of the work was. His ideas about knowledge rest on an initial distinction between the world of nature (and of natural sciences) and the world of spiritual objects, the basis of whose knowledge he classified as a mixture of objective and subjective elements (
Geisteswissenschaft
), or knowledge of the products of mind or spirit. Whereas there is no real English or American equivalent for it (although the study of culture is a rough approximation),
Geisteswissenschaft
is a recognized academic sphere in German-speaking countries.
In his later essay, “Epilegomena to
Mimesis
” (1953; translated from the German for the first time in this edition), Auerbach says explicitly that his work “arose from the themes and methods of German intellectual history and philology; it would be conceivable in no other tradition than in that of German romanticism and Hegel” (571).

While it is possible to appreciate Auerbach’s
Mimesis
for its fine, absorbing explication of individual, sometimes obscure texts, one needs to disentangle its various antecedents and components, many of which are quite unfamiliar to modern readers but which Auerbach sometimes refers to in passing and always takes for granted in the course of his book. Auerbach’s life-long interest in the eighteenth-century Neapolitan professor of Latin eloquence and jurisprudence Giambattista Vico is absolutely central to his work as critic and philologist. In the posthumously published 1745 third edition of his magnum opus
The New Science
, Vico formulated a revolutionary discovery of astonishing power and brilliance. Quite on his own, and as a reaction to Cartesian abstractions about ahistorical and contextless clear and distinct ideas, Vico argues that human beings are historical creatures in that they make history, or what he called “the world of the nations.”

Beneath the Black Moon (Root Sisters) by Fine, Clara
Heart of the Sandhills by Stephanie Grace Whitson
Breaking Into the Business by Hadley Knox
Unknown by Unknown
The Listmaker by Robin Klein
Puccini's Ghosts by Morag Joss
The Door by Magda Szabo
A New Haven Christmas by Angelique Voisen
Taking Back Tara (Ranch Lovers Romance) by Paludan, Eve
Hints of Heloise by Laura Lippman
Our partner