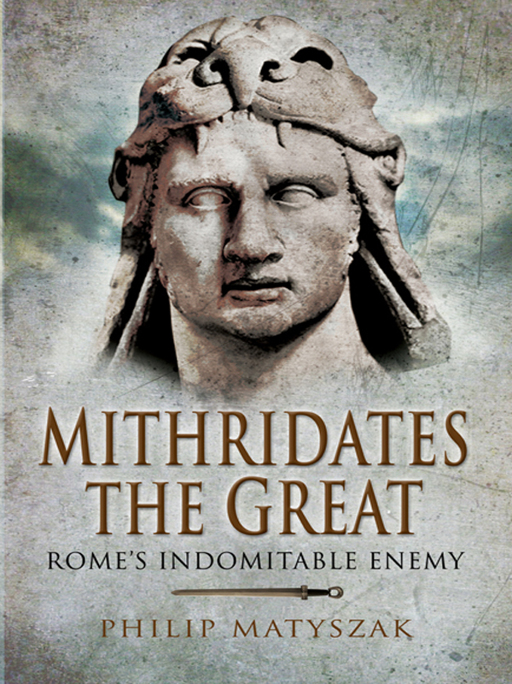 This is for Derek, who knows that despotic and incompetent governments are not found only in antiquity.

The right of Philip Matyszak to be identified as author of this work has been asserted by him in accordance with the Copyright, Designs and Patents Act 1988.

All rights reserved. No part of this book may be reproduced or transmitted in any form or by any means, electronic or mechanical including photocopying, recording or by any information storage and retrieval system, without permission from the Publisher in writing.

Printed and bound in Great Britain
By CPI UK

Chapter 3: The First Clash With Rome

Chapter 6: The Road to Dardanus

Chapter 10: The Return of the King

‘Mithridates – what a character! I wish Hollywood would realize some true stories are far more interesting than fiction.’ So commented one of those whom I approached for help with this project.

And it is true that the life of Mithridates VI Eupator of Pontus reads like an overblown film script of the 1950s. It has palace coups, plots and assassinations. It features incest, fratricide and an unhealthy fascination with poison. There are epic battles, sieges and massacres, kingdoms in turmoil, distressed princesses, corrupt officials and pirates. All that is lacking in the epic drama that was the life of Mithridates is a hero –– in this entire saga of battle, double–dealing and betrayal, a good man is indeed hard to find.

Certainly Mithridates does not qualify. The murder of his brother and several of his sons may be forgiveable given the ruthless Darwinism of Hellenistic dynasties, but the massacre of some 80,000 civilians in one day, and the casual execution of prisoners and hostages when it seemed expedient make Mithridates seem at times almost a monster.

Yet at other times, Mithridates is magnificent. Magnificent in his loyalty to his friends (he once refused to accept they they were conspiring against him until he hid under a couch to hear them plot his betrayal), in his physical courage, and above all, magnificent in his indomitable refusal to admit defeat or contemplate surrender. This is a character who left a sinking ship when a pirate vessel came alongside and by sheer force of personality not only persuaded the pirates to take him to safe harbour, but also to salvage his ship. Mithridates was a man who, as an aged refugee, could flee into an uncharted and barbaric wilderness with a handful of followers, and come out of the other side with an army. He was ruthless, Machiavellian and bloodthirsty, but, most certainly, he was a King. Well he deserves his title of ‘the Great’.

Yet for all this, Mithridates is little known, even to scholars of antiquity. The trends of modern research have led more toward sociological and economic studies, and the biography of great men, even those who trod the central stage of antiquity, has fallen somewhat by the wayside. The most recent studies of Mithridates are those of A N Sherwin–White in his magisterial
Roman Foreign Policy in the East
, and the more eclectic yet immaculately researched
The Foreign Policy of Mithridates Eupator
by B C McGing. Even these two books
were written almost a quarter of a century ago, and for an academic audience.

This volume aims to make Mithridates accessible to a more general readership, and I take the opportunity to thank those – from Oxford scholars to Turkish travel guides – for the enthusiasm which they showed in helping to bring this story to life. No understanding of Cappadocian dynasties is required to enjoy this book, and the convoluted politics of the region have been subordinated in what is primarily the history of a war where the front line moved from Athens to the Euphrates and a good way back again. If this book has heroes, it is the Pontic soldiery who took on the killing machine of the Roman army and came closer to breaking it than is generally realized. To a large degree, this is primarily their story.

The loyalty of these men to their king through decades of warfare, through heady triumphs and crushing defeats is a remarkable testament to their stubbornness and to the charisma of the man who led them. Chronicling the life of Mithridates has been a fascinating exercise, and I strongly suspect that, even after two millennia, the defiant Pontic battle king will still attract new followers.

As always, this book has partly been the result of discussions with others in the ancient world. I’d particularly like to thank Adrian Goldsworthy for reading and commenting on some of the battles, and Barbara Levick for her encouragement. My thanks also go to those who generously contributed pictures for this project, and to the members of the UNRV forum who pointed me to some interesting sources on Mithridatic poisons. I also owe thanks to Denise Cles and her husband Mark for their hospitality and, above all, to my wife Malgosia, who fed, watered and occasionally dusted me whilst I spent 2007 immersed in books and journals.

1. Bust of Mithridates, now in the Louvre, Paris (photograph copyright Sandra A Whiteway).

6. Sinope, the mercantile centre of the Pontic kingdom.

7. The Black Sea forests, source of the timber for the Pontic fleet.

8. Rock tombs of the Pontic kings at the ancient capital of Amaysa (copyright Luc Wouters).

11. Ancient Rhodes at the time of Mithridates’ siege (composite image by the author).

12. Merchant ship and lighthouse from a mosaic at Ostia Antica (author’s photograph).

14. Roman auxiliary soldiers from a relief in the Vatican Museum (author’s photograph).

1. The world of Mithridates, circa 90 BC

4. Approximate route of the Fimbrian legions during their last campaign under Lucullus

5. The Battle of the Amnias River (phases I–IV)

6. The Battle of Chaeronea, opening dispositions

8. The Battle of Tigranocerta (phases I – VI)

The world of Mithridates. The date of 90 BC is only an approximate guide; for example, the Armenian empire is shown at its (later) greatest extent. 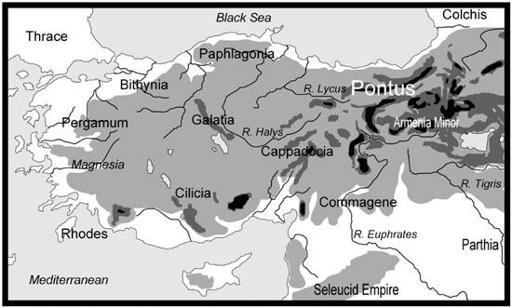 Physical geography of Pontus showing the approximate positions of the main cities, uplands and river systems. 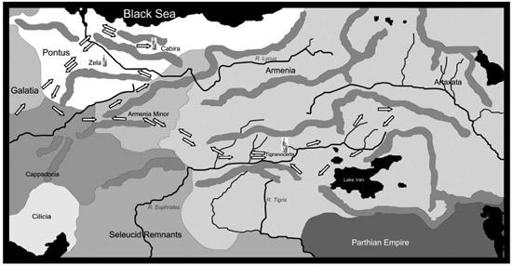 There and back again. Map depicting the possible approximate route of the Fimbrian legions during their final campaign under Lucullus. In reality their travels to the north of Lake Van were considerably more convoluted and extensive.

The World of Mithridates

When Mithridates VI of Pontus was born in 120 BC, his homeland of Asia Minor was at the centre of the world. To the south and east, beyond the mountains of Armenia, lay Mesopotamia, the land between the Tigris and Euphrates rivers. This was the fabled cradle of civilization, home of cities such as Ur and Assur, where man had first learned the arts of building and writing – and organized warfare.