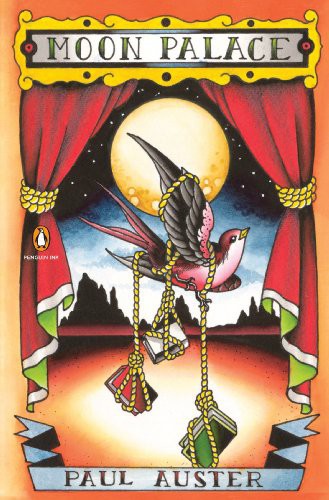 Spanning three generations, and illuminated by marvelous flights of lyricism and wit,
Moon Palace
follows an orphan child of the sixties as he seeks the key to his past and the answers to the riddle of his fate.

Paul Auster’s novels include
Brooklyn Follies
,
Oracle Night
, and
In the Country of Last Things
, as well as two memoirs, a collection of essays, a volume of poems, and the screenplays for several films. His work has been translated into over 30 languages.

“Paul Auster’s characters are drawn with great generosity and love.… in
Moon Palace
, he finds a new and fascinating voice.”

“Reads like a composite of works by Fielding, Dickens, and Twain…. Auster has a lot of fun concocting Marco’s adventures—almost as much fun as one has in reading them.”

“This is a big-spirited romance….”

“This wry and magnetic novel glows with lunar images, and, like the moon, fascinates.”

“For those who love the gamesmanship of reading… Auster’s fiction is a delight…. Especially successful is his moon motif, central to his themes of presence and absence, parent and child.”

“Moon Palace
is an oasis in the lunar landscape of modern fiction.”

“
One of the best books I’ve read … From first paragraph to last
Moon Palace
is absolutely superb. If there’s literary justice, Thomas Effing will become as fam’liar to American readers as Huck Finn, Scarlett O’Hara, and Captain Augustus McCrae.”

“
Lean, fluid, vigorous, and delightfully lucid … an intellectually engaging meditation on self and other, solitude and society, mind and matter—and on art as ‘a method of understanding, a way of penetrating the world and finding one’s place in it’… a testament to Auster’s imaginative powers… strange and arresting”

PAUL AUSTER is the author of the novels
The Brooklyn Follies, Oracle Night, The Book of Illusions, Timbuktu, Mr. Vertigo, Leviathan
(awarded the 1993 Prix Medicis Étranger),
The Music of Chance
(nominated for the 1991 PEN /Faulkner Award),
Moon Palace, In the Country of Last Things
, and the three novels known as “The New York Trilogy“:
City of Glass, Ghosts
, and
The Locked Room.
He has also written two memoirs (
The Invention of Solitude
and
Hand to Mouth
), a collection of essays, and a volume of poems, and edited the book
I Thought My Father Was God: And Other True Tales from NPR’s National Story Project.
Auster was the recipient of the 2006 Prince of Asturias Award for Letters and was inducted into the American Academy of Arts and Letters in 2006. He has won literary fellowships from the National Endowment for the Arts in both poetry and prose, and in 1990 received the Morton Dauwen Zabel Award from the American Academy and Institute of Arts and Letters. He wrote the screenplays for
Smoke, Blue in the Face
, and
Lulu on the Bridge
, which he also directed. His work has been translated into more than thirty languages. He lives in Brooklyn, New York.

First published in the United States of America by

Except in the United States of America, this book is sold subject to the condition that it shall not, by way of trade or otherwise, be lent, resold, hired out, or otherwise circulated without the publisher’s prior consent in any form of binding or cover other than that in which it is published and without a similar condition including this condition being imposed on the subsequent purchaser.

The scanning, uploading and distribution of this book via the Internet or via any other means without the permission of the publisher is illegal and punishable by law. Please purchase only authorized electronic editions, and do not participate in or encourage electronic piracy of copycopyed materials. Your support of the author’s rights is appreciated.

Nothing can astound an American.

I
t was the summer that men first walked on the moon. I was very young back then, but I did not believe there would ever be a future. I wanted to live dangerously, to push myself as far as I could go, and then see what happened to me when I got there. As it turned out, I nearly did not make it. Little by little, I saw my money dwindle to zero; I lost my apartment; I wound up living in the streets. If not for a girl named Kitty Wu, I probably would have starved to death. I had met her by chance only a short time before, but eventually I came to see that chance as a form of readiness, a way of saving myself through the minds of others. That was the first part. From then on, strange things happened to me. I took the job with the old man in the wheelchair. I found out who my father was. I walked across the desert from Utah to California. That was a long time ago, of course, but I remember those days well, I remember them as the beginning of my life.

I came to New York in the fall of 1965. I was eighteen years old then, and for the first nine months I lived in a college dormitory. All out-of-town freshmen at Columbia were required to live on campus, but once the term was over I moved into an apartment on West 112th Street. That was where I lived for the next three years, copy up to the moment when I finally hit bottom.
Considering the odds against me, it was a miracle I lasted as long as I did.

I lived in that apartment with over a thousand books. They had originally belonged to my Uncle Victor, and he had collected them slowly over the course of about thirty years. Just before I went off to college, he impulsively offered them to me as a goingaway present. I did my best to refuse, but Uncle Victor was a sentimental and generous man, and he would not let me turn him down. “I have no money to give you,” he said, “and not one word of advice. Take the books to make me happy.” I took the books, but for the next year and a half I did not open any of the boxes they were stored in. My plan was to persuade my uncle to take the books back, and in the meantime I did not want anything to happen to them.

As it turned out, the boxes were quite useful to me in that state. The apartment on 112th Street was unfurnished, and rather than squander my funds on things I did not want and could not afford, I converted the boxes into several pieces of “imaginary furniture.” It was a little like working on a puzzle: grouping the cartons into various modular configurations, lining them up in rows, stacking them one on top of another, arranging and rearranging them until they finally began to resemble household objects. One set of sixteen served as the support for my mattress, another set of twelve became a table, others of seven became chairs, another of two became a bedstand, and so on. The overall effect was rather monochromatic, what with that somber light brown everywhere you looked, but I could not help feeling proud of my resourcefulness. My friends found it a bit odd, but they had learned to expect odd things from me by then. Think of the satisfaction, I would explain to them, of crawling into bed and knowing that your dreams are about to take place on top of nineteenth-century American literature. Imagine the pleasure of sitting down to a meal with the entire Renaissance lurking below your food. In point of fact, I had no idea which books were in which boxes, but
I was a great one for making up stories back then, and I liked the sound of those sentences, even if they were false.

My imaginary furniture remained intact for almost a year. Then, in the spring of 1967, Uncle Victor died. This death was a terrible blow for me; in many ways it was the worst blow I had ever had. Not only was Uncle Victor the person I had loved most in the world, he was my only relative, my one link to something larger than myself. Without him I felt bereft, utterly scorched by fate. If I had been prepared for his death somehow, it might have been easier for me to contend with. But how does one prepare for the death of a fifty-two-year-old man whose health has always been good? My uncle simply dropped dead one fine afternoon in the middle of April, and at that point my life began to change, I began to vanish into another world.

Danse Macabre by Stephen King
Among the Betrayed by Margaret Peterson Haddix
Time-Out by W. C. Mack
Easy by Tammara Webber
Real Challenge (Atlanta #2) by Kemmie Michaels
How We Deal With Gravity by Ginger Scott
Awakening the Wolf by Crymsyn Hart
Melt by Natalie Anderson
Outside The Lines:: Third Person Narration by Bella Love
Cheated By Death by L.L. Bartlett
Our partner