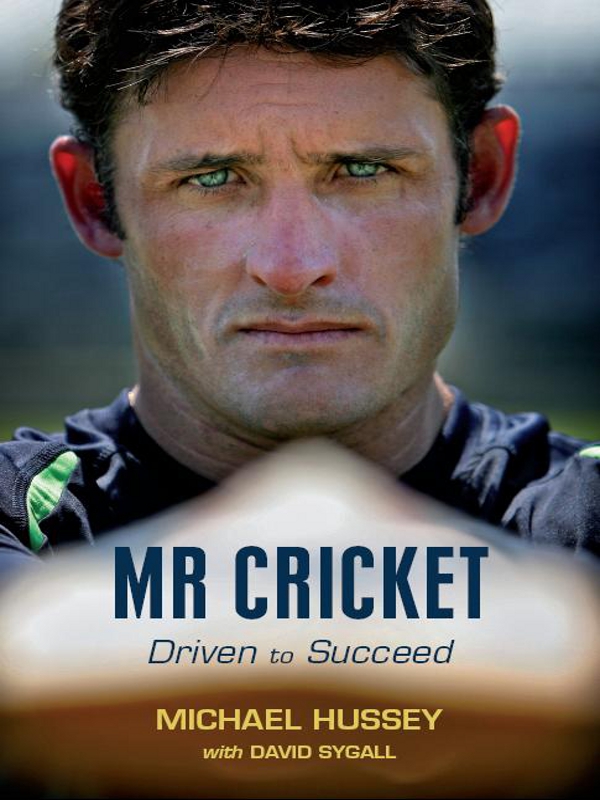 Cataloguing-in-Publication data is available from the National Library of Australia.
Mr Cricket
ISBN 978 1 74066 542 1

To my wife Amy and our three wonderful children Jasmin,
William and Molly who continue to inspire me every day.

I would like to sincerely thank David Sygall for working closely with me to compile this book. A mutual respect and friendship has been built up during the project. David's writing skills and work ethic have been pivotal in producing a book that I am truly proud of.

My thanks also extends to John Buchanan, Steve Waugh, Ryan Campbell, Ian Kevan, Bob Carter, Trevor Hohns, Neil Maxwell, Sandy Gordon, Vic Smith, my Mum and Dad and my wife Amy for their contributions to the book, their kind words, honesty and for their views on me and my cricket.

I am also grateful to Ross Dundas for providing the statistics that appear in the book.

Chapter 6
Preparation Is the Key

Chapter 9
What It's All About 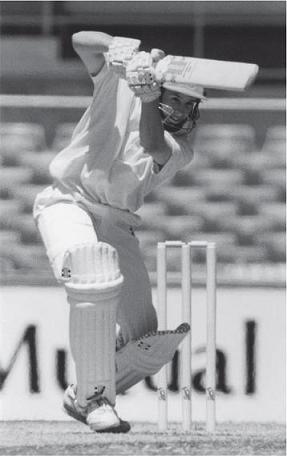 T
his playing cricket caper was all Brad Michelson's fault. Brad was my buddy at primary school in Perth and the day I went to watch him play for the Whitfords Cricket Club Under 10s was the day I started hassling my dad, Ted, to get me into a team. Dad obliged â he had no choice really â and the next season he registered me to play for the mighty Whitfords U12s.

I was anything but a team man back in those days. My only experience of cricket to that point had been trying to kill my brother, David, in the backyard. Sport was all about one-on-one competition for me, a survival of the fittest if you like, and the concept of helping out your teammates seemed pretty foreign.

So, when I got wind of Whitfords CC's idea to award a club cap to players who scored 50 runs or took five wickets in a match, I decided that was my one and only aim in life. I had to win a baggy blue, to be recognised for my talents, to win respect and admiration from those around me, to be regarded as one of the elite players in the team. It didn't matter how long it took, I just knew that I was going to get a club cap for an outstanding performance. It would be nice if the team won, too. But that was a secondary consideration.

After a few training sessions we had our first practice match and, according to the script I'd written in my mind, I scored 50. However, my joy was soon soured when I found out that, because it wasn't a competition match, the knock wouldn't count and I wouldn't be presented with the coveted baggy blue. It was devastating and I was furious. But it didn't sway me.

The following week we started the season with a two-day game, bowled first and rolled our unfortunate opponents for about 25 runs. Here was my chance and later in the day I managed to score an official 50. This time there was no denying me, the score was locked into the annals for all time and before play began the following Saturday the coach pulled us together and presented me with my very own Whitfords Cricket Club baggy blue cap. It was the proudest moment of my life to that point. Not bad, considering it was my very first game of club cricket.

It's a little embarrassing today to admit that my recollection of that game was not about helping out my teammates, or even trying to win the game. It was simply about winning that baggy blue. Now, that might seem selfish. But it was really my first experience of having set out to achieve a particular goal â and reaching it. The lessons in teamsmanship and cooperative goalsetting would come only after I'd reached my primary goal of winning the club cap. Scoring a 50 and being presented the Whitfords baggy blue was my first genuine taste of success. And it meant the world to me.

Fast forward 20-odd years and I had a similar experience, if on a slightly larger scale. In late October 2005, a week before the Test series against the West Indies was to begin, my Western Australia teammate Justin Langer was injured during a game against Victoria at the Junction Oval when Gerard Denton got one to rear up into his ribs. All the WA Test guys were playing in that match and when it finished they went straight from Melbourne to Brisbane to prepare for the First Test.

Victory belongs to the most persevering.

I flew back to Perth with the rest of the WA team and, though I was hoping JL wasn't
too badly hurt, I did become a bit edgy about the prospect of getting a call-up. I put it to the back of my mind and the next day my wife, Amy, our first daughter Jasmin and I went to Cottesloe Beach for some breakfast and a walk. We were driving home afterwards when the phone rang. It was chairman of selectors Trevor Hohns. I nearly drove off the road.

âHuss,' he said, âWe need you up in Brisbane on standby for Justin as quickly as possible. There's a flight leaving for Brisbane in one hour. Do you think you can make it?'

âYep, no worries,' I said, without even considering how tricky that might be.

Our peaceful and relaxing morning had been turned upside down. But it was certainly worth it. I got home as quickly as I could, packed my bags and rushed off.

It was quite a scene when I arrived at the airport. I was besieged by what seemed like a million cameramen, journalists and photographers. It was a bit intimidating but I was mostly calm because in my mind there were few expectations. I didn't expect to be playing in the First Test. Rather, the overall sense was of relief that I was the one to be placed on standby. Phil Jaques had been scoring heavily for NSW and I thought at the time that he was regarded as the opener-in-waiting. It was great just to know that at that point in time I was the next cab off the rank.

Never let your fears get in the way of your dreams.

But perhaps my recollection of being cool, calm and collected was a little off the mark because, as I was lifting my bag onto the weigh-in counter â in front of what seemed like the world's entire media and just as many onlookers â the bag split open and all my clothes fell out. Hello international cricket! It was extremely embarrassing. Things didn't get much better when I reached the sanctuary of the plane. It was a very uncomfortable plane ride which I shared with a guy who proceeded to get completely plastered on rum and coke and wouldn't shut up for the entire flight. Nevertheless, little could dampen my joy at being called up to the national team.

When I arrived in Brisbane (probably smelling of rum, even though I hadn't drunk any!) the boys were having a private team function at the hotel. Whatever trepidation I had was immediately brushed aside by their great welcome. Each one of them made me feel that I had achieved something really huge and, most importantly, that I deserved to be there.

But would I play? JL was high as a kite on painkillers and kept telling me he was a certainty to take his place.

âThere's no way I'll be missing this Test, Huss,' he slurred more than once. âThere's really no use you being here.'

Anxious to find out if he was right or if it was just the drugs talking I sought out Errol Alcott, the team's physiotherapist, who told me he thought Justin had no chance at all of playing. As soon as I heard that I thought âWhoah!'. It was the first time I thought I might actually be playing in a Test match.

At training the next day I watched Justin like a hawk, trying to pick up on any grimace or sign of pain or weakness. Much to my surprise he got through training without any apparent problem at all. In fact, he batted beautifully in the nets, as well as ever, and my heart sank. Again I felt those terrible thoughts of being so close, yet so far. When would another chance come along? Would I ever get to play for Australia? I had waited so long and spent so many years thinking my opportunity might never come.

I was listed to have my net practice just after Justin and, as I walked past him, he came straight up to me, looked me in the eye and said simply: âHuss, I'm out. You're in. And, good luck.'

I went completely numb. Honestly, I could not remember the first five or 10 balls I faced in the nets. After a short while I got a grip on things and thought to myself, âCome on, Huss. You're playing in a Test match for Australia. Start preparing!' My mind switched into gear and I started preparing in the same way I had for any of the hundreds of matches I'd played over the years. Pretty soon, though, the magnitude of what lay ahead started to sink in.

Hooking Up : Sex, Dating, and Relationships on Campus by Kathleen A. Bogle
Mist Over the Water by Alys Clare
The Wand-Maker's Debate: Osric's Wand: Book One by Albrecht Jr., Jack D., Ashley Delay
Starseed by Jude Willhoff
Pirate Hunter's Mistress (The Virginia Brides) by Vinet, Lynette
Dead Heading by Catherine Aird
The Kiss after Midnight (The Midnight Trilogy) by Amazon, Marvin
River's Song - The Inn at Shining Waters Series by Carlson, Melody
The Girls Who Went Away by Ann Fessler
The Third Reich by Roberto Bolaño
Our partner