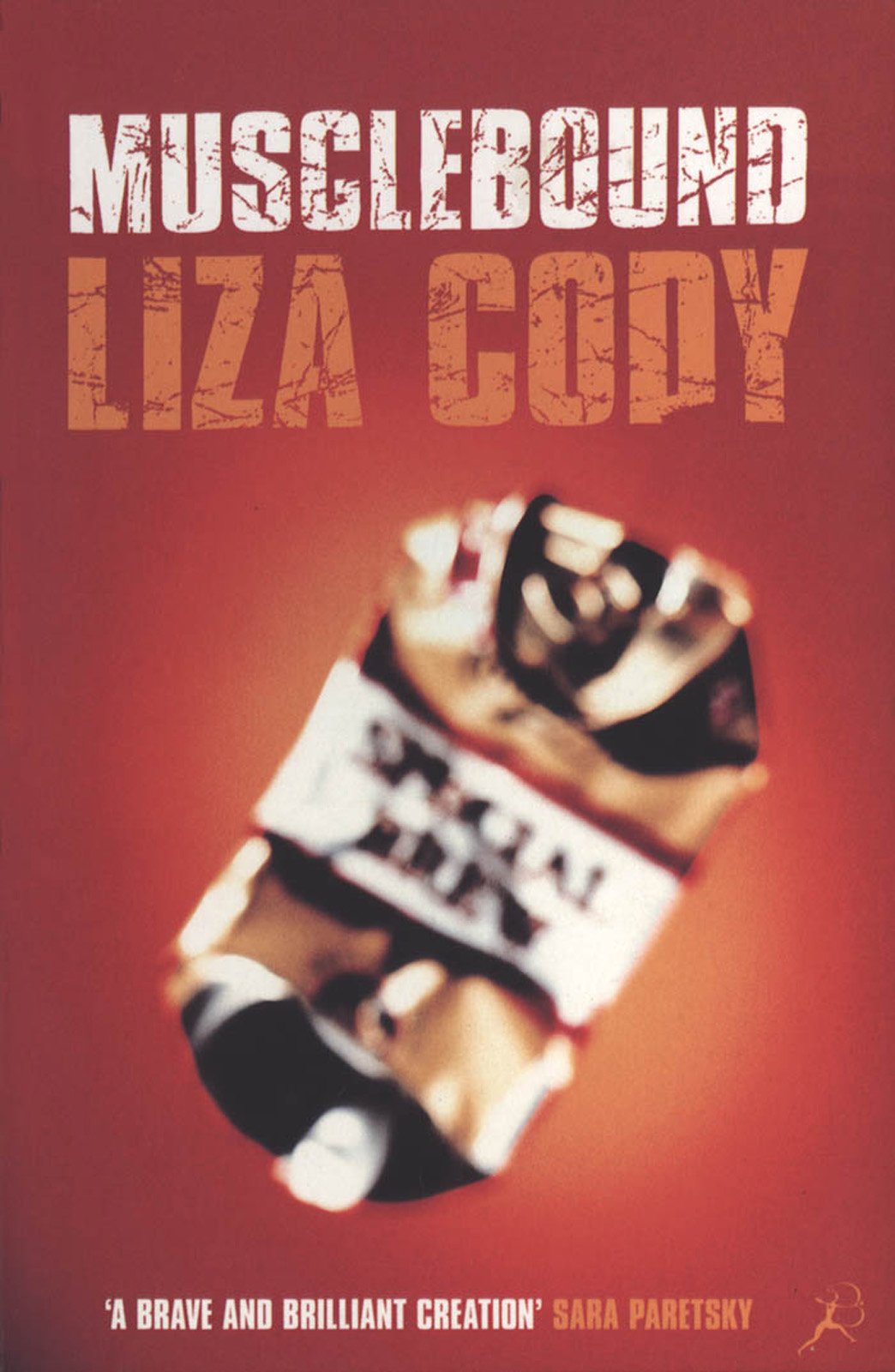 A year ago, Eva Wylie was the biggest, meanest, ugliest female wrestler to disgrace the ring. Her name was on posters. People recognized her on the street. But having been barred from the ring, she's back at the bottom, reduced to guarding rich people's cars and dreaming of yesterday's triumphs.

It’s a porking joke. I can’t help laughing. I’m sat here, in the back of a van with my Thermos full of hot tea, protecting a car-park. Me – the greatest living motor-borrower of all time. There ain’t a single one of these poncy rich-men’s playthings I couldn’t have away. Before you could say, ‘Eva’s a genius,’ I’d be in there, snick-snack, and off, vroom-vroom.

But no – I’m not doing that, am I? I’m watching over them, aren’t I? I’m sat here with my Thermos, saying, ‘Off you go, you swollen, fat-walleted bastard – off you go to America or Bonn – make a few more million. See if I care. Take the missus and the kiddies to Disneyland – waste your dosh on the spoilt little dwarves. I don’t give a wet pooh. And don’t you worry none. ‘Cos Eva’s here making sure your Mercedes is waiting safe and sound for when you come home with your nose peeling and all them plastic bags full of cheap booze hanging off your arm.’

See, this here’s a private car-park for the three-car, gold-card, platinum-watch, eat-my-shit brigade. They get security and full-wax valeting all in one go. They don’t have to drive to the long-stay car-park at the airport and then climb in a bus with the rest of the hoi polloi. Oh no – they get chauffeured from one fancy location in London to a first-class lounge in the terminal of their choice. And they get petted and portered and called sir all the way along the line. Yes,
sir
.

Except when she’s down on her luck. When you got no luck,
you lick. No lick, no lucre. No lucre, no luck. It’s all one big barbed-wire circle. It keeps them who’s got nothing in their place – which is saying sir to them who’s got it all.

Don’t you sneer at me, though. A girl’s got to survive. Surviving’s an honourable profession where I come from. I’m big. I got to eat. I got three dogs, and they’re big too, and they got to eat. So who’s going to feed us? You? Don’t make me laugh. The last time I got fed for free I was in pokey, and believe me, no free meal’s worth that price.

It doesn’t bear thinking about.

I stopped thinking and said, ‘C’mon, Milo, shake yer legs.’ And I opened the van door.

Milo is my third dog, my youngest. He’s hand-reared. And if I say it myself, he’s turning out totally monster. He’s got a head like a bull and feet like a camel and he ain’t full-grown yet.

He woke up from his twitchy sleep and went, ‘Herf?’

‘Shut up,’ I said, and I laid my hand on his snout. I’m teaching him to be quiet, see, to speak only when it counts. You can’t have an attack dog who yacks for no reason. Besides, his voice hasn’t broken proper yet. And sometimes I can’t help laughing when he goes, ‘Hip-herf,’ and looks all flummoxed at himself. And I mustn’t laugh, ‘cos when I laugh he thinks I’m soft. Which I ain’t. I’m the boss. And that’s a fact he better not forget.

‘Siddown!’ I said. I walked away. I’m also teaching him to stay where he’s put. I don’t want him following me around like a lapdog. A guard dog is not a pet, but Milo hasn’t got the hang of it yet.

I walked away into a row of Audis, BMWs, Rovers and other shiny motors. I went where I could see him but he couldn’t see me.

Milo stirred and strained like he was tied up. But he didn’t come to me. I was stone chuffed. I only want him to come when I call
his
name. I didn’t call his name. I called my other two dogs. But they didn’t come because they ain’t
here. They’re at home guarding the breaker’s yard where we live.

I was well pleased because it means Milo is learning their names as well as his own.

I went away even further and then I yelled, ‘Milo!’

‘Herf-hip,’ he shouted – stupid pup. He came bounding along, all feet and knees, and ran full tilt into my thighs.

‘Herf?’ he said. But he sat down, grinning from ear to ear like he’d told a really good joke.

‘Shut up, you soppy devil,’ I said. But I gave him half a Bow Chow and a pat ‘cos I was pleased with him even if he does talk too much.

I put him on my left-hand side and we walked in and out of the Audis making sure no thieving little crow had nicked any hub-caps, telephones or radio cassettes.

See, this is supposed to be a secure lock-up for top people’s motors, but it isn’t as secure as the owners say. There’s been some pinching going down, and that’s why me and Milo are spending the night in a van. And when you think about it, I’m the best you can get for this kind of job. What I don’t know about driving away in some other bastard’s motor you can stuff in a flea’s left lug-hole. Believe.

It was cold and it was dark. London was snoring – like it does. The blob of light from my torch bounced along ahead of us, and Milo’s breath steamed out of his nostrils like dragon-puff.

Just me and Milo, out walking, watching and working. Me and Milo. Milo and me. Everyone else all cosy and comfy, kipped down in their sweaty cots, snoring and farting. All safe and tucked up with Eva guarding the family Ferrari.

And then it all went turd-shaped. I got dumped on. I won’t tell you how, ‘cos that’s another story and I don’t want to think about it. But it wasn’t my fault. It was those other arse-holes’ fault, only I got the blame. As usual.

This time last year I’d walk into a hall and hear the crowd shout my name – ‘Eva, Eva, Bucket Nut, Bucket Nut.’ They’d scream and roar. They’d boo and hiss and spit. No one ever ignored me. No, not ever. Because I was someone, and I had my name on posters. I had cash in my pocket, I had my picture in programmes.

But that was last year. Now I’m nobody. Now I’m trudging round under the cold moon with my hands balled up in my sleeves, and only Milo to care if I live or die.

Is it any wonder the Enemy takes advantage? There’s people like that. They wait till you’re down and then they walk all over you in hobnail boots. They say, ‘You doing anything this week, Eva?’ When they know for sure you’re doing sweet fuck-all ‘cos no one wants you no more.

That’s what the Enemy says. She says, ‘Because if you’re free I’ve got a job for you.’

If I’m free! She knows I got nothing. She knows I can’t say, ‘Bugger off, ferret-face. Find some other mug.’ Which is what I want to say.

You think I
want
to spend the night watching Rovers and Rollers? Don’t be so sodding feeble-minded. Me? The London Lassassin? The ex-London Lassassin. Oh no. I was born for better.

Well, no. I wasn’t born for it, except in me heart. I made myself better. With me own sweat.

And now I’m back where I started. And the Enemy takes advantage. She makes me play nanny to a load of fat farts’ motors and she thinks I ought to be grateful. A lot she knows!

In case you don’t know, the Enemy is Anna know-it-all Lee of Lee-Schiller Security. She’s politzei, and a right royal ache in the arse. But she’s got coin, and I ain’t. So she can say, ‘Stay awake,’
and then climb into her warm soft kip to snooze while I do her dirty work in the cold and dark. That’s what coin does. If you got it you can laugh. If you don’t got it you have to jump when them that’s got it say, ‘Jump.’

And she can say, ‘It’ll do you good, Eva. You’re getting out of condition.’

And in my head, I say, ‘You talking? Or are you chewing breeze blocks? I ain’t listening.’ But I got to stand there like she’s talking sense, ‘cos she’s got coin and I ain’t.

‘Herf?’ said Milo. And I smacked his muzzle and made his eyes water.

‘Hip!’ he said, like I was the world’s number-one bastard. Which I ain’t.

The world’s full of much bigger bastards than I’ll ever be. I ain’t even bastard number six zillion.

‘You think I’m a bastard,’ I said to Milo. ‘But I’m only doing it for your own good. If I let you speak every time you fancy speaking, you’ll be no sodding good as a guard dog. You’ll be out on your ear with no one to feed you or keep Ramses and Lineker from chomping your no-good tail.’

Milo blinked the tears out of his eyes and trotted on.

Milo doesn’t know, ‘cos he’s too young to remember, but Mr Deeds, Mr Dirty Deeds, was the one who kicked me out of my world. Mr Deeds of Deeds Promotions said to me, ‘You’re out, Eva. You’re barred. I don’t never want to see your ugly mug again. Not ever. You’re through. You won’t never fight on any of my bills again.’

Yes, he said that. To me. After I’d filled a hall for him. And had the crowd going ballistic – screaming and swearing and wanting my autograph.

He put the whammy on me. I couldn’t get no fights after that.

It’s all there still. Out there. Somewhere. But I ain’t allowed in. It’s lost. And without it, I’m lost. How’m I going to be rich and famous without I’m the London Lassassin? Tell me that.

Lord of Slaughter by M. D. Lachlan
Up Close and Personal by Maureen Child
Enduring Everything (Marked Heart #1) by M. Sembera
Evil Under the Sun by Agatha Christie
Sociopaths In Love by Andersen Prunty
Engaging (Alluring Book 2) by Sarah Curtis
Sword Play by Emery, Clayton
Dimension of Miracles by Robert Sheckley
Callie's Heart by Cia Leah
High by LP Lovell
Our partner