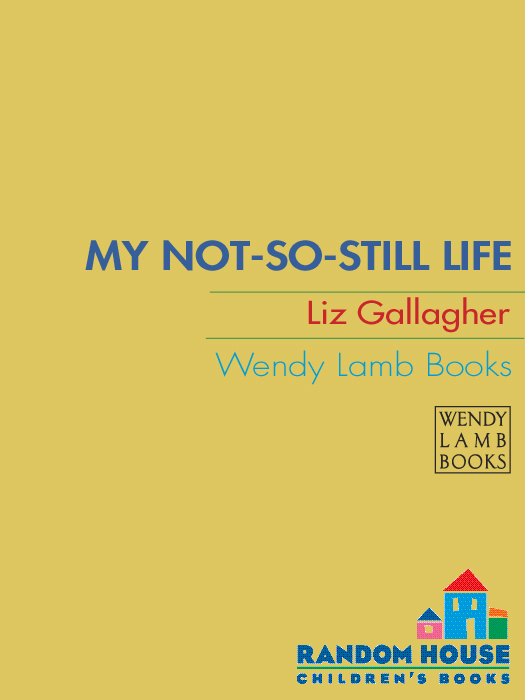 The Opposite of Invisible

Wendy Lamb Books and the colophon are trademarks of Random House, Inc.

Visit us on the Web!
www.randomhouse.com/teens

To all the friends
who waited for this book,
especially Bruce Wylie,
who lived so beautifully

It’s time for a new color.

I drape my Smurfette towel over my shoulders and yell, “I’m ready for pink!”

Nick joins me in my bathroom. He unpacks the bleach kit, the bottle of dye.

We do this so often, we’ve got it down to a science. Nick gets everything prepped, using the back of the toilet as his work space.

An hour later, I’m blowing my new hair dry while Nick plays with eyeliner at my desk.

“The pink looks hot,” he says when I come out of the bathroom. “It’s so bright.”

“I love it,” I say. It reminds me of cherry blossoms, my favorite.

Here’s why I change my hair color so much: All the talent in the world doesn’t equal an actual personality. It’s not enough to only make the art. You have to
be
the artist.

Since sixth grade I’ve been all sorts of other colors. They were all starting to blend on top of each other, though, so it was a mess. Now that we’ve bleached it out and started over with the pink, I feel like myself, like a good version of me, like something worth looking at, twice. And that’s what I want. If people don’t notice me, why should I do anything? Why even exist?

“Nice job coloring in the lines,” I say to Nick.

“Coloring in the lines” is all about comics. Nick likes to draw, but he’s better at doing color than outlines. He and a boy called Jewel started a strip together freshman year, before I was close with either of them. Not that I’m close with Jewel anymore.

Their strip lasted for only a few months. They’d get color copies at the copy shop by school and put a stack on a table during each of their lunch periods, all nonchalant, like they didn’t care if anyone picked it up or not. People did. I’m not totally sure why the guys stopped, except that neither one of them seems to have a long attention span. Not for projects, and not for relationships.

In comics, there’s the penciler, the inker, and the colorist. Sometimes they’re all the same person, and sometimes
people are great at one or two parts, so they specialize. The penciler sketches the general feeling of each panel. That was Jewel. The inker does the outlines, the black, the final artwork. That was Jewel, too. The colorist does the color, the lighting, the shading. That’s Nick, prettying up everything around him.

That’s me, too, in general. A colorist. Giving life to a black-and-white world.

Nick’s pretty colorful himself, at least in his clothes. Jetblack hair works on him, so he’s kept that up since the fall, and it looks especially good when he wears his neon tank tops and tees. He loves his eighties hoodie with the electric-blue star on the back, outlined in silver glitter.

He’s actually dialed it down, adding jeans and sneakers to the mix, but for a while there in the fall, he always looked like he was on his way to a rave. He’s the sweetest guy you’ve ever met, though, and he doesn’t go to raves.

Tonight, he’s wearing my black T-shirt with the metallic stars, his favorite Euro-style jeans, and his silver adidas Superstars. He dresses the same whether he’s at school, hanging out in my bedroom, or going out, which for us usually means taking the bus to grab coffee or food and watch Seattle go by while Seattle watches us.

I’m in my black cotton tank dress. It’s stained with paint splotches and drips of bleach from various hair experiments, and those stains are the reason it’s my favorite thing to wear around the house. At school, I dress in a way
my mom considers “wild,” but really it’s not that crazy. When I go out, I wear school-type clothes with more intense makeup.

“I nuked you a snack,” Nick says, nodding toward the plate on my bed. My mom and Grampie always stock our freezer with microwave burritos, the healthy ones with the whole-wheat tortillas. Except for the weeks after they do their big salmon grab.

They love salmon, the ocean, and Puget Sound. Grampie was a lifer longshoreman until he retired last year, and Mom still works at the docks. Grampie jokes that they have water in their veins.

They go out fishing with a friend on his boat, leaving the port in Ballard before sunrise, and they fish salmon till the sun goes down. They do this for a solid week. Then they host this party in our tiny backyard for everyone we know, and they smoke the salmon.

Burritos are more to my liking. I sit down to munch. “Thanks.”

Nick’s eating at my desk. He went minimal with his eyes, just a touch of brown liner at the outside corners.

He picks up my phone and snaps a photo of me when I’m off guard. “To show Holly your hair,” he says. My friend Holly doesn’t usually leave her house on weeknights, except for orchestra practice.

Mom pokes her head in the door. Her curly brown hair
is in a messy ponytail as usual, and she has zero makeup on. At least she keeps a decent tan from working outside. It’s not the kind of tan you’d get in a sunny place, of course, but the sun does break through, even in Seattle, and she does ten-hour shifts at the docks. She’s in her gray sweats. You can tell how strong she is from her hard work. Still, she’s feminine. Her voice is so warm. “Pink. Hmmm. Not bad.”

Mom looks at Nick before going back to the family room to watch TV with Grampie. “Ten o’clock, hon.”

“Time flies when you’re coloring Vanessa.” He grabs his backpack and I walk him to the front door, give him a quick hug goodbye. “Art walk tomorrow night?”

“Absolutely,” I say. “Holly might be able to come too.”

“Superb.” He heads out the door.

I’ve slept in the same bed my whole life, and it was my mom’s before it was mine. We still live in the house where she grew up, with my Grampie. I sleep in my mom’s childhood bedroom; she sleeps in the master bedroom; Grampie sleeps in the converted basement.

On weekdays, when I wake up, Mom’s already at work at the docks. She’s up before dawn. Grampie’s usually at the kitchen table with the crossword. I’m almost always running late for school.

My dad’s never been around. I think of Grampie more
as a dad. My actual dad is Paul, my mom’s high school boyfriend. He lives near San Diego now, and has a wife but no other kids. His parents feel so guilty about him getting Mom pregnant, they help out with raising me. Financially, that is. They paid for me to go to Ocean Tides for middle school, and they’d happily have kept paying for me to go to private high school, but I didn’t want to. No way was I wearing a uniform. I think what they really feel guilty about is that Paul got to go off to college and build a normal life, while Mom stayed here, stuck to me.

Every day, I wear a string around my wrist—different colors representing how I’m feeling. My string scale follows the spectrum—purple is the best, then blue, green, yellow, orange, red, and then black. Last fall, when my heart got mashed, I wore black.

I started the strings during middle school at Ocean Tides, in the art room on a day that must’ve been one of the first times I ever really thought about personal expression. The art room had this green shag rug in one corner, and we’d sit there to have “verbal exploration,” as our art teacher, Bobby, called it. That day, we were talking about the color wheel and how colors can bounce off each other. He wanted us to do a self-portrait with a focus on color. I froze. I just could not decide what color best represented me. I haven’t really stopped thinking about it since.

Today, I go for a blue string.

After I pick out the string every day, I pick out an outfit,
usually a skirt that my mom will say is too short, and a top that’s either black or super-bright. Today: denim and black.

I pile on jewelry. I’ve made most of it myself. Lots of paper-clip bracelets and pop-top necklaces. Grampie lets me use his drill when I want to make beads out of found objects like the pop-tops, a guitar pick from a show at Vera Project, a little star I whittled in Mr. Smith’s art workshop at school.

I consider where I would get a tattoo. Correction: where I
will
get a tattoo. Some days, I want one on my ankle. Or the inside of my forearm. I think about my lower back and my rib cage. I want to cover my whole body with ink and become a piece of art.

Mom says no, that I’m too young to know what I want. I’ve agreed to wait till I’m eighteen. Two more years. Not that I expect much to change by then.

I do my makeup. Usually some purple on my eyes, and lots of liner and mascara. My lips explore a range from shimmery nude to black. When Nick does my makeup, he might choose pinks, but I almost never do. Sometimes, he does each eye in different colors, so they don’t match.

Then I go out to the kitchen, to the little round wooden table with the mismatched Goodwill chairs, and have my cereal. Grampie eats oatmeal with brown sugar. He has gray hair that used to be chocolate brown, and brilliant blue eyes that hide behind his reading glasses. He’s
always been on the skinny side, but he’s developed a gut since he stopped working. His retirement uniform is a pair of Carhartt pants and a white tee. His voice is scratchy from smoking for so many years.

We always tell each other to have a good day, and then I go outside and jump on my bike.

Gates High School is a cage full of zombie kids. I’m forced to go in there every day and pretend to be one of them. But even being the artistic rebel girl is a role I’ve gotten sick of.

It’s like someone has to be the outsider, and it’s me, but most of these people don’t really know that I’m not solely defined by pink hair and rainbow eye shadow.

Thank the Goddess for Nick, who waits for me every morning at the door by the cafeteria. He knows what my home is like, what my heart is like.

Let’s get one thing absolutely clear: I am not a girl who thinks that high school is the best time of my life. My real life hasn’t actually started yet. I can’t wait to get out of here.

My hair defined me on the first day of high school. It was dark brown with blue bangs. On my neck I had a Sharpie rose tattoo, which took me hours to do in the mirror.