My Stroke of Insight: A Brain Scientist's Personal Journey 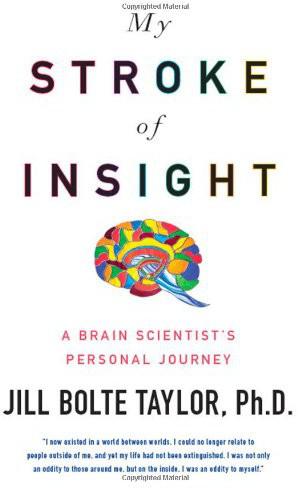 My Stroke of Insight:

No part of this book may be used or reproduced
in any manner whatsoever without written permission
except in the case of brief quotations
embodied in critical articles and reviews.

Appendix B, "Recommendations for Recovery,"
may be reproduced for personal use.

This book is dedicated to G.G.

Thank you, Mama, for helping me heal my mind.
Being your daughter has been my first and greatest blessing.
And to the memory of Nia.

11    Healing and Preparing for Surgery

Appendix B: Recommendations for Recovery

Every brain has a story and this is mine. Ten years ago, I was at Harvard Medical School performing research and teaching young professionals about the human brain. But on December 10, 1996, I was given a lesson of my own. That morning, I experienced a rare form of stroke in the left hemisphere of my brain. A major hemorrhage, due to an undiagnosed congenital malformation of the blood vessels in my head, erupted unexpectedly. Within four brief hours, through the eyes of a curious brain anatomist (neuroanatomist), I watched my mind completely deteriorate in its ability to process information. By the end of that morning, I could not walk, talk, read, write, or recall any of my life. Curled up into a little fetal ball, I felt my spirit surrender to my death, and it certainly never dawned on me that I would ever be capable of sharing my story with anyone.

My Stroke Of Insight: A Brain Scientist's Personal Journey
is a chronological documentation of the journey I took into the formless abyss of a silent mind, where the essence of my being became enfolded in a deep inner peace. This book is a weaving of my academic training with personal experience and insight. As far as I am aware, this is the first documented account of a neuroanatomist who has completely recovered from a severe brain hemorrhage. I am thrilled that these words will finally go out into the world where they might do the most good.

More than anything, I am grateful to be alive and celebrative of the time I have here. Initially, I was motivated to endure the agony of recovery thanks to the many beautiful people who reached out with unconditional love. Over the years, I have remained obedient to this project because of the young woman who contacted me out of desperation to understand why her mother, who died from stroke, had not dialed 9-1-1. And because of the elderly gentleman, who was laden with worry that his wife had suffered enormously while in a coma before her death. I have remained tethered to my computer (with my faithful dog Nia on my lap) for the many caregivers who have called in search of direction and hope. I have persisted with this work for the 700,000 people in our society (and their families) who will experience stroke this year. If just one person reads "The Morning of the Stroke," recognizes the symptoms of stroke and calls for help - sooner rather than later, then my efforts over the last decade will be more than rewarded.

My Stroke of Insight
falls into four natural divisions. The first portion, "Jill's Pre-Stroke Life," introduces you to who I was  before my brain went offline. I describe why I grew up to be a brain scientist, a little of my academic journey, my advocacy interests, and my personal quest. I was living large. I was a brain scientist at Harvard, serving on the national board of NAMI (the National Alliance on Mental Illness) and traveling the country as the
Singin' Scientist.
I follow this very brief personal synopsis with a little simple science, which is designed to help you understand what was going on in my brain biologically on the morning of the stroke.

If you ever wondered what it might feel like to have a stroke, then "The Morning of the Stroke" chapters are for you. Here, I take you on a very unusual journey into the step-by-step deterioration of my cognitive abilities, as viewed through the eyes of a scientist. As the hemorrhage in my brain grew larger and larger, I relate the cognitive deficits I was experiencing to the underlying biology. As a neuroanatomist, I must say that I learned as much about my brain and how it functions during that stroke, as I had in all my years of
academia. By the end of that morning, my consciousness shifted into a perception that I was at
one
with the universe. Since that time, I have come to understand how it is that we are capable of having a "mystical" or "metaphysical" experience - relative to our brain anatomy.

If you know of someone who has had a stroke or some other type of brain trauma, then the recovery chapters may
prove to be an invaluable resource. Here, I share the chronological journey of my recovery, including over fifty tips about things I needed (or didn't need) in order to recover completely. My "Recommendations for Recovery" are listed in Appendix B for your convenience. I hope you will share this information with anyone who may benefit.

Finally, "My Stroke of Insight" defines what this stroke has taught me about my brain. At this point, you will realize that this book is not really about stroke. More accurately, the stroke was the traumatic event through which the insight came. This book is about the beauty and resiliency of our human brain because of its innate ability to constantly adapt to change and recover function. Ultimately, it's about my brain's journey into my right hemisphere's consciousness, where I became enveloped in a deep inner peace. I have resurrected the consciousness of my left hemisphere in order to help others achieve that same inner peace - without having to experience stroke! I hope you enjoy the journey.

I am a trained and published neuroanatomist. I grew up in Terre Haute, Indiana. One of my older brothers, who is only 18 months older than I, is diagnosed with the brain disorder schizophrenia. He was officially diagnosed at the age of 31, but showed obvious signs of psychosis for many years prior to that. During our childhood, he was very different from me in the way he experienced reality and chose to behave. As a result, I became fascinated with the human brain at an early age. I wondered how it could be possible that my brother and I could share the same experience but walk away from the situation with completely different interpretations about what had just happened. This difference in perception, information processing, and output motivated me to become a brain scientist.

My undergraduate academic journey began at Indiana University in Bloomington, Indiana in the late 1970s. Because of my interactions with my brother, I was hungry to understand what "normal" was at a neurological level. At that time, the subject of neuroscience was such a young field that it was not yet offered on the IU campus as a formal area of specialization. By studying both physiological psychology and human biology, I learned as much as I could about the human brain.

My first real job in the world of medical science turned out to be an enormous blessing in my life. I was hired as a lab technician at the Terre Haute Center for Medical Education (THCME), which is a branch of the Indiana University School of Medicine hosted on the campus of Indiana State University (ISU). My time was evenly divided between the medical human gross anatomy lab and the neuroanatomy research lab. For two years, I was immersed in medical education and, while mentored by Dr. Robert C. Murphy, I fell in love with dissecting the human body.

Bypassing the master's degree, I spent the next six years officially enrolled in the ISU Department of Life Science Ph.D. program. My course load was dominated by the first-year medical school curriculum, and my research specialty was neuroanatomy under the guidance of Dr. William J. Anderson. In 1991, I received my doctorate and felt competent to teach Human Gross Anatomy, Human Neuroanatomy, and Histology at the medical school level.

In 1988, during my time at the THCME and ISU, my brother was officially diagnosed with schizophrenia. Biologically, he is the closest thing to me that exists in the universe. I wanted to understand why I could take my dreams and connect them to reality and make my dreams come true. What was different about my brother's brain such that he could not connect his dreams to a common reality and they instead became delusions? I was eager to pursue research in schizophrenia.

Following commencement from ISU, I was offered a postdoctoral research position at Harvard Medical School in the Department of Neuroscience. I spent two years working with Dr. Roger Tootell on the localization of Area MT, which is located in the part of the brain's visual cortex that tracks movement. I was interested in this project because a high percentage of individuals diagnosed with schizophrenia exhibit abnormal eye behavior when watching moving objects. After helping Roger anatomically identify Area MT's

location in the human brain,
1
I followed my heart and transferred into the Harvard Medical School Department of Psychiatry. It was my goal to work in the lab of Dr. Francine M. Benes at McLean Hospital. Dr. Benes is a world-renowned expert in the postmortem investigation of the human brain as it relates to schizophrenia. I believed this would be how I could make my contribution to helping people stricken with the same brain disorder as my brother.

The week before I began my new position at McLean Hospital, my dad Hal and I flew to Miami to attend the 1993 annual conference of NAMI, the National Alliance on Mental Illness.
2
Hal, a retired Episcopalian minister with a Ph.D. in counseling psychology, had always been an advocate for social justice. We were both motivated to attend this convention to learn more about NAMI and what we could do to merge our energy with theirs. NAMI is the largest grassroots organization dedicated to improving the lives of persons living with serious mental illness. At that time, NAMI had a membership of approximately 40,000 families with a loved one who is psychiatrically-diagnosed. Now NAMI has a membership of approximately 220,000 families. The National NAMI organization advocates at the national level while the State NAMIs advocate at the state level. In addition, there are over 1100 local NAMI affiliates scattered around the country providing support, education, and advocacy opportunities for families at the community level.

That trip to Miami changed my life. A group of around 1,500 people, comprised of parents, siblings, offspring, and individuals diagnosed with severe mental illness, gathered together for support, education, advocacy, and research-related issues. Until I met other siblings of individuals with mental illness, I had not realized what a profound impact my brother's illness had had on my life. In the course of those few days, I found a family of people who understood the anguish I felt at the loss of my brother to his schizophrenia. They understood my family's struggle to help him access quality treatment. They fought together as an organized voice against the social injustice and stigma related to mental illness. They were armed with educational programs for themselves, as well as for the public, about the biological nature of these disorders. Equally important, they rallied with the brain researchers to help find a cure. I felt that I was in the right place at the right time. I was a sibling, a scientist and passionate about helping people like my brother. In my soul I felt that I had found not only a cause worthy of my effort, but also an extended family.