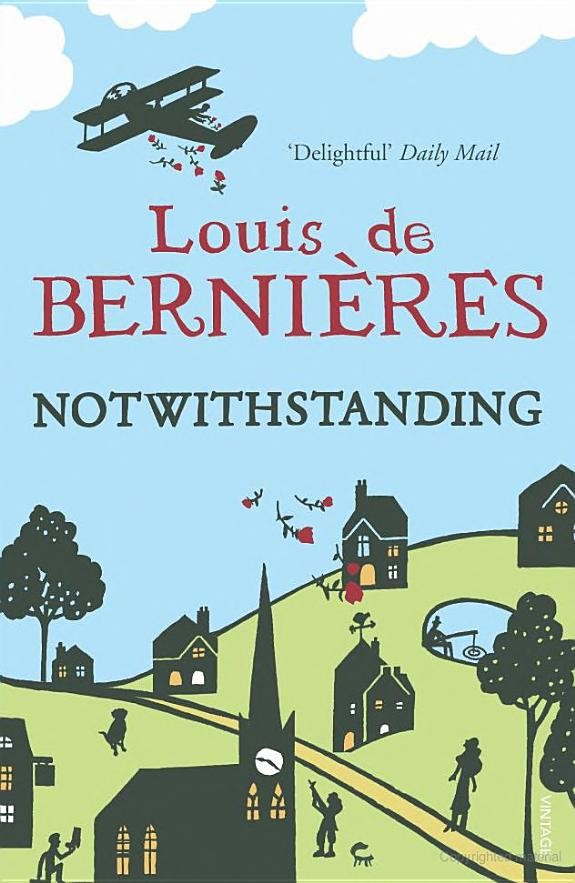 Archie and the Birds

Archie and the Woman

Colonel Barkwell, Troodos and the Fish

All My Everlasting Love

The Devil and Bessie Maunderfield

Footprint in the Snow

The Happy Death of the General

The Death of Miss Agatha Feakes

Welcome to the village of Notwithstanding where a lady dresses in plus fours and shoots squirrels, a retired general gives up wearing clothes altogether, a spiritualist lives in a cottage with the ghost of her husband, and people think it quite natural to confide in a spider that lives in a potting shed. Based on de Bernières’ recollections of the village he grew up in,
Notwithstanding
is a funny and moving depiction of a charming vanished England.

Louis de Bernières’ works include seven novels, a short story collection and a radio play. His 2008 novel, The Partisan’s Daughter was shortlisted for the Costa Novel Award, and his most recent work,
Notwithstanding: English Village Stories
, was published in 2009. An international best-seller, Captain Corelli’s Mandolin won the Commonwealth Writer’s Prize for Best Novel in 2004.

Señor Vivo and the Coca Lord

The Troublesome Offspring of Cardinal Guzman

Sunday Morning at the Centre of the World

This book is dedicated to my children, Robin and Sophie. May they take their village with them wherever they go.

Stories from an English Village

There is a wilderness where once I lived

Whose every inch I knew and loved.

I roamed there as a dreaming boy

I walked there still, remembering,

As I grew up beyond a man.

Sweet little in that wilderness I knew

Of God’s indifference and of lovers’ pain.

Too young to suffer, I remember

ARCHIE AND THE BIRDS

‘I’M NOT IN
. Over,’ I told my mother, sighing as I held the walkie-talkie in my right hand and with my left continued painstakingly to stick small seeds to the outside of my living-room window.

‘When will you be back? Over,’ she asked.

‘Well, I hope you’re back soon,’ she said, reprovingly. ‘This is the third time I’ve walkie-talked and you haven’t been there. How am I supposed to talk with my own son if he’s never there? Over.’

‘What’s keeping you so occupied, anyway? Over.’

‘I’m sticking seeds to the living-room window, Mother. Over.’

There was a pause for thought, and then my
mother
said, ‘Well, at least you’re keeping out of mischief. I’ll buzz you later. Over.’

I placed the walkie-talkie on the window ledge, and continued to stick the seeds to the window. It was extremely tedious, and, as I had been at it since breakfast time, I was beginning to find the whole task irksome. I should have been out painting and decorating and bringing in some cash. I even wondered whether this palaver was worth it. Some of the seeds were exceedingly small, and I kept dropping them into the flower bed. I had heard that a lot of the ones in bird food are actually hemp, and I worried that perhaps in the spring these would germinate. If the village bobby happened to pass by, I might get into serious trouble and cause a scandal in the village. So I was spending an undue amount of time on my knees on the damp lawn, looking for the seeds that I had dropped. No doubt many would be found by mice, but then the cat would probably jump on them and I would feel guilty about having lured them to their deaths.

That was the least of my worries. In fact, my whole life was turning into a series of irritating little problems, each of which required altogether too much time to deal with. In this instance it ultimately occurred to me that the sensible thing would be to cover the window with glue, and then just fling the
seeds
at it in the hope that most of them would stick. I tried this plan out, and it worked quite admirably. I stood back and contemplated my good work, whereupon the walkie-talkie crackled again.

‘Mother to Archie-master. Are you back yet? Over,’ demanded my mother. ‘Only I just heard from the priest that you were late at Mass last Sunday, and caused a stir when you came in. Over.’

‘I am back, Mother, obviously, and I would have been on time if I hadn’t been late. I had to take Archie out before he did his business on the carpet. Over.’

‘Well, that’s all right then. Only it’s a bad thing to get a reputation for lateness. It reflects badly. Over.’

‘So it does,’ I said. ‘But let me point out that you didn’t go to Mass at all. You were in bed with a magazine and your head full of curlers. Over.’

I went back indoors and into the living room. The smears on the glass looked horrible from the inside, and the seeds somehow didn’t look right. I realised that I should have arranged them in some kind of artistic pattern. I could have made them into a portrait of a cockerel, or even a nice parsnip, but now it was too late. The walkie-talkie buzzed again. ‘Mother to Archie-master. So why would you be sticking seeds on the windows? Over.’

‘Mother,’ I said, a little wearily, ‘why can’t you just come out of the kitchen and talk to me without using
the
walkie-talkie? I’m only in the living room. Have you lost the use of your legs? Over.’

‘I’m making a cake and getting lunch. Bangers and mash and baked beans. It’ll be ten minutes. I’ll give you a buzz. Over and out.’

I sat in my armchair and waited to see what the response to the seeds would be. I realised that I could not expect results right away, but nonetheless I was extremely curious. While I waited for lunch I reflected upon the chain of events that had led me to adopt this desperate measure.

It had begun with the dog, a black retriever. The gypsy who sold it to us took advantage of our ignorance, saying that it was a golden retriever, and that it would turn gold later. All golden retriever puppies were black at first. He was obviously expecting us to fall in love with the dog, so that by the time we found out we’d been sold a pup, we wouldn’t be wanting a refund. He was right, that was exactly what happened, only we got revenge by giving him a rotten rooster and telling him it was pheasant, well hung.

My mother wanted to call the dog Sooty, but the cat had already laid claim to that name, and we didn’t fancy the confusion, so we called him Archibald Scott-Moncrieff instead, or Archie for short.

Archie was a lollopy friendly dog, and when he was very small he developed a predilection for shoelaces. You couldn’t take a step without finding
him
fastened to your foot. We took to wearing slip-ons, and he just transferred his attentions to the kitchen trolley, biting at the wheels whenever my mother moved it about the house, and yipping at it incessantly when it wasn’t being wheeled anywhere. We realised that we had acquired a dog with a terrible flair for obsession, and we decided to take his mind off the trolley. I brought him out in the fields with a walking stick and taught him to retrieve.

He was altogether the natural retrieving dog, and soon I was out there with a nine-iron and a golf ball, practising day and night for the pitch-and-putt competition, with Archie flying back and forth between the legs of the cows, my Penfold Commando in his jaws. I tried to train him to put the ball back on the tee, but his nose got in the way of his eyes, and he missed. He had a soft mouth and never put a single mark on the ball, and I had such good practice that soon enough I could hit the ball high and straight, and land it on any cow I chose. I could have given Christie O’Connor a match, and I would have won the competition but for a run of bad luck in the putting.

The trouble was that Archie wouldn’t stop retrieving, and in his spare time he filled the house with junk. We’d be watching the goggle-box in the evening, as Archie rushed in and out with his tennis ball. We’d leave the front door open and throw the
ball
out of the living-room window, whereupon Archie would fly into the hallway, out of the front door and into the darkness. Through the window would come wafting the sound of Archie galumphing and crashing and snuffling in the shrubs, and soon enough he’d be back with his ball drenched in saliva, dropping it at our feet, looking up at us with liquid brown eyes full of pleading, and then one of us would go soft and throw the ball out again, saying ‘Bloody dog’ as we did so.

When we couldn’t take any more, Archie just went out and fetched things that hadn’t even been thrown. That’s how my mother found her gardening gloves again, and that’s how one evening we were presented with a frog, a log, a baby rabbit and a marrow that needed picking. One day Archie shattered the rake by trying to charge through the front door with the handle horizontal in his mouth. The only thing that Archie didn’t retrieve was the cat, because Sooty wouldn’t cooperate, and fluffed herself up into a chimney brush if ever he tried. Just as we were Catholics, in fact the only other Catholic family in Notwithstanding (everyone else being Anglican except for the brothers at the garage who didn’t drink), retrieving was the nearest that Archie got to having a religion, and since we’d always practised toleration, we felt that we had to put up with his chosen way of life.

Bard I by Keith Taylor
A Question of Identity by Anthea Fraser
The Real Trap Wives Of Memphis by Monica Parker
Protecting Jessyka (SEAL of Protection) (Volume 6) by Susan Stoker
Detour to Apocalypse: A Rot Rods Serial, Part One by Michael Panush
Yvvaros: The Digital Frontier by Alex Mulder
Bamboozled by Joe Biel, Joe Biel
Assassin Mine by Cynthia Sax
La cazadora de profecías by Carolina Lozano
The Victim by Kimberley Chambers
Our partner