Obama Zombies: How the Obama Machine Brainwashed My Generation 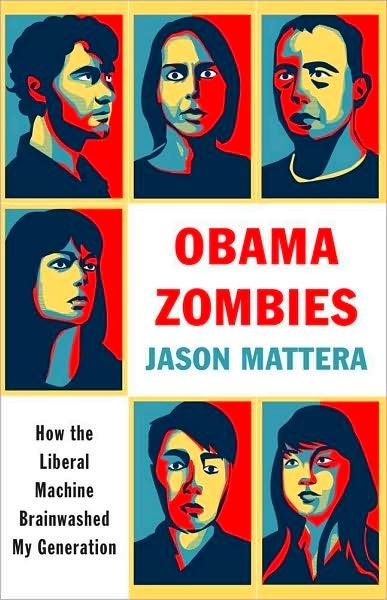 How the Liberal Machine Brainwashed My Generation

All rights reserved, including the right to reproduce this book or portions thereof in any form whatsoever. For information address Threshold Editions Subsidiary Rights Department, 1230 Avenue of the Americas, New York, NY 10020.

THRESHOLD EDITIONS and colophon are trademarks of Simon & Schuster, Inc.

To Charissa, Rachel, Justin, Becky, and Kristian: Our future, our fight

1. The Media Muzzle and the Hope-a-Dope Mantra

3. The Dave Matthews Electoral Magnet-- And Other Ways to Manufacture a Crowd

Conclusion: A Six-Point Battle Plan for Awakening Obama Zombies from Their Brainless Slumber

I seriously think I had an emotional seizure or something. My whole body seized up. I couldn't breathe. It's like I really mattered. . . . I picked the president!

What is an Obama Zombie?

Rewind to the night of the 2008 election. Obama's victory wasn't just political; to many young people, it wrought salvation. Supporting Barack during the election was one thing. But him defeating John McCain?

After Obama was pronounced the victor, throngs of students at Maine's Bowdoin College huddled in a circle; some hands were held, others were raised to the sky (from whence Dear Leader
descended) as they collectively wept, bowed their heads, and sang . . . "Amazing Grace." We were the "wretches," once blind and lost, until B.H.O. opened our eyes with his outstretched rod touching the land. How sweet the sound indeed!

As one patchouli-smelling hippie on campus exhorted, "It's definitely the most spiritual experience I've had in a while."
1
Meeting Ozzy Osbourne in the flesh was her previous one.

In what can only be described as an O-gasm, one Florida female student proclaimed, "It's probably the most excited I've ever been in my entire life. I seriously think I had an emotional seizure or something. My whole body seized up. I couldn't breathe. It's like I really mattered. . . . I picked the president! That was me! . . . I think I'm in love with America right now!"
2

Outside the White House, legions of young people organized an impromptu rally through text messaging and word of mouth. By the time it concluded, they all needed new underwear.

One young lady, holding an Obama balloon, proclaimed that B.H.O. was going to bring "peace to everybody in the world."
3

Cars honked. Partyers climbed streetlamps. There was dancing, whooping, and hollering. Even conga drums made it onto the scene. The commotion had the flavor of New Year's Eve. The alcohol and mindless speeches were on full display.

"We got the key now," a dude mawkishly shouted. "After-party in the Oval Office. Open up!"

The chants and musical odes were aplenty. Students from George Mason University (GMU) led the crowd to this ditty:

Who is our president

So we tell them.

One of the GMU organizers even gave a shout-out to Obama's manhood, urging McCain supporters not to hate on the new president. My description of events is quite generous in its lucidity. Like those of most Obama Zombies, his statement was virtually incomprehensible. Judge for yourself: "Today, everybody represent Obama as a man. You know, don't disgrace Obama. Represent Obama as a man. And today, we're gonna sing, uplift, and bring Obama's presidency, because that's what we're gonna do, that's what we're here to do, man."

At the University of Pennsylvania, students who had packed into a gymnasium erupted into chants of "yes, we can" from the bleachers. Obama acolytes at Emerson College in Boston were equally apoplectic, with one female student proclaiming "Oh my God!" in the midst of covering her mouth in utter disbelief, like a prepubescent girl at a Jonas Brothers concert. At Ann Arbor, thousands of students ran, jumped, and high-fived through the streets of the University of Michigan.
5
Students at Virginia Commonwealth University took a different tack: they roared
and
set off an array of firecrackers.
6

THAT, MY FRIENDS
, is what Obama Zombies look like. They placed Barack on a pedestal reserved for no mere mortal. It led to the mental mummification of my generation and is why there are masses of Obama Zombies who desperately need awakening.

This book is a countercultural statement. It is out of step with the thoughts of many of my generation, and that is precisely why this book matters. This is a book for every freethinking, freedom-loving person who is fed up with the left's lobotomy of a gen- eration. Ours must be a generation that stands athwart history yelling, "Hey, jackass! Get your government off my freedom!"

Some believe it's too late, that the legions of Obama Zombies are beyond awakening. I don't. I believe they can be revived. I'm an optimist. But I'm also a realist. It will take jolting the Obama Zombies of our world with facts, the kind of facts that sappy, hyperemotional liberalism loathes. Evidence, logic, thinking--those are liberalism's gravest threats.

There's nothing wrong with wanting to be inspired. But getting swept up in a marketing machine's manufactured emotion does not good citizenship make. Tons of young people, just like the ones described above, looked to B.H.O. for inspiration, for light, as though he was going to drop iPods from heaven and melt away student loans forever.

Obama promised the obligatory liberal smorgasbord of programs and free goodies that would help his loyal subjects overcome their "struggles." Obama would give us health care. Obama would pay for our schooling. Obama would stop glaciers from melting. Obama would guarantee us better jobs. Obama would end all wars, curb racism, and tackle terrorism. And, while he's at it, Obama said, he would send a government unicorn down from the sky to fly us up to the left's government-run world where people dance across streets of
government-owned gold, eating FDA-approved candy canes while watching multiculturally appropriate edited reruns of
Baywatch
--guilt-free. Just the usual liberal goodie bags of free gifts galore--and all paid for on the backs of those darned evil rich folks.

Young people, in their heart of hearts, actually believed that a scrawny street-agitator-turned-presidential-candidate could save mankind, renew our faith in American politics, and restore our faith in government. It was a message that hoodwinked my generation. A message of false inspiration in bureaucracy--not in individual freedom and initiative--that churned out a generation of Zombies. And it was a message that was a heat-seeking mis- sile aimed at otherwise clear-thinking individuals who come from the most coddled, overprotected, information-drenched generation in American history. We are the "give me, give me, give me" generation. And Team Obama and his marketing mavens knew every button to push to program us, to set us up like an iTunes playlist.

TO THE TRUE
Obama zealots, this book is an act of heresy. It seeks to shatter the media-created halo that radiates from Obama's anointed head. It is the response from the millions of my generation who are disgusted by what Obama and his minions have done to lobotomize our generation.

We're calling you out.

Yeah, you know who you are in academia.

You know who you are, the beta males at MTV who use the network to intravenously make liberalism cool and palatable.

Hustle Him (Bank Shot Romance #2) by Jennifer Foor
Consequences by Philippe Djian
Breanna by Karen Nichols
In the Dead of Night by Aiden James
The Traveling Corpse by Double Edge Press
Peppermint Kiss by Kelly McKain
The Body of Il Duce by Sergio Luzzatto
All Of Her (Fantasy Heights) by Silver, Meg
Autum's Lost (A letting go series) by Leia Madison
Motivation (Shifters Forever After# 3) by Elle Thorne
Our partner