Read One Day in December: Celia Sánchez and the Cuban Revolution Online

One Day in December: Celia Sánchez and the Cuban Revolution 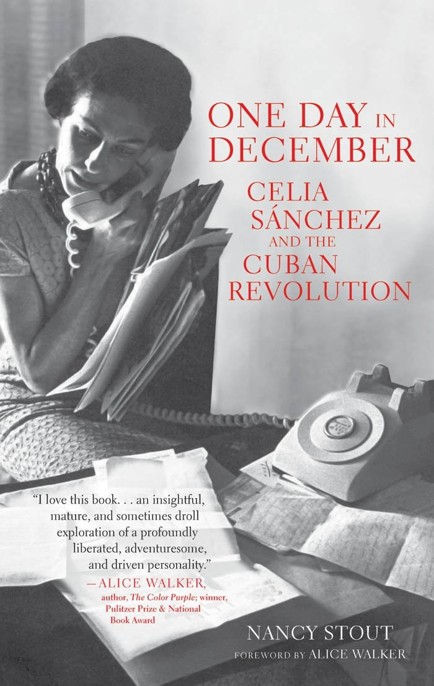 One Day in December

One Day in December

Celia Sánchez and the Cuban Revolution

One day in December : Celia Sanchez and the Cuban Revolution / Nancy Stout; foreword by Alice Walker.

6. October and November 1956, The Last Five Days of November

26. The House that Celia Built

32. The Urban
Comandancia
and the Zapata Swamp Resort

NOTHING MAKES ME MORE HOPEFUL
than discovering another human being to admire. My wonder at the life of Celia Sánchez, a revolutionary Cuban woman virtually unknown to Americans, has left me almost speechless. In hindsight, loving and admiring her was bound to happen, once I knew her story. Like Frida Kahlo, Zora Neale Hurston, Rosa Luxemburg, Agnes Smedley, Fannie Lou Hamer, Josephine Baker, Harriet Tubman, or Aung San Suu Kyi, Celia Sánchez was that extraordinary expression of life that can, every so often, give humanity a very good name.

A third of a century ago I saw a photograph of Celia taken twenty years before, just after she and her fellow revolutionaries became the official Cuban government. She was in the uniform of the Cuban rebel army, thin as a rail, her dark hair cut very short. Her face was gray and drawn, and she was (I believe) smoking a cigarette. Knowing her life story now more fully, I realize that lung cancer would contribute to her early death, which came close to the time I saw that picture.

I SAT DOWN TO READ
One Day in December
with little notion that it would affect me so deeply. I read it through, then immediately turned to the first page and read the entire more than four-hundred-page manuscript again. I had the sensation I experienced the first time I saw a Frida Kahlo painting, probably the self-portrait of
Frida wearing the necklace of thorns with a dead hummingbird attached: I knew life for women, and for a certain kind of creative rebel, whether female or male, a suffering, creative, and utterly devoted-to-life rebel, would never be the same. This book about Celia Sánchez produces a sensation like that. Filled with amazing revelations and documentations of a revolutionary woman whose life seems to me exactly the
medicina
our desperately flailing societies and countries are crying for. A clear vision of what balanced female leadership can be; and, even more to the point, what a truly egalitarian revolutionary leadership of female and male partners might look like.

Yes, the male we’re talking about here is
el Jefe
, Fidel Castro. Revealed in this book to be brave and conscientious, also at times almost comically naïve, but unfaltering in his devotion and service to the people of Cuba. The most telling aspect of this was his adoption, along with Celia, of numerous Cuban children, many of whom had lost their parents during the Revolution. Not only did the two adopt these children but, during long years of assassination attempts and other social and political dramas of the most hair-raising sort, they managed to raise them.

Amazingly, Fidel and Celia worked together long before they ever met (sending each other covert messages detailing the work to be done); when they did meet they remained for the most part inseparable until the day of her death. But were they lovers? This is the question that, while Celia lived, obsessed Cubans and non-Cubans alike. Reading this book one sees something so fascinating, so precious, so good for us, that the question loses all meaning. We, in most of our relationships with one another, are headed somewhere else (other, for instance, than conventional marriage—very good news in my opinion) and these two offer a model of a revolutionary partnership that
thrived
. What they did in moments of privacy is, as this biography sees things, chiefly their own affair. But the question, in subtler forms, is considered. Whether, or to what extent, they were lovers, they were
beloveds
. Soul mates,
compañeros
, buddies, who reveled in each other and, together, devoted their lives to the cause of freeing the Cuban people from a brutal dictatorship and its legacy; while envisioning and working toward the creation of The New Person (sometimes referred to as “The New Man”) and The New Society.

For much of the world Cuba already represents the future, if in fact there’s one to be had. It has taught the world, especially the poor and First World–dominated countries, what it means to bear, over decades, the brunt of implacable, unrelenting and lethal hatred. Coming unfortunately, in Cuba’s case, from its nearest neighbor, the United States. And shown how, even so, to move steadily forward guided by one’s own understanding of one’s needs.

The people in this book who were tortured, assassinated, disappeared, left me yearning for and missing them. For instance, Frank País—a young schoolteacher of twenty who was the other
comandante
, Fidel’s partner in guiding the overthrow of the dictator, and Celia’s primary contact in the early days of the Revolution—was murdered by Batista’s police a month after his younger brother, Josué, had been killed by them. Their mother, Rosário, who claimed their bodies, is now gone too, yet I am still able, as I experience their story, to feel some of her agony. And that of two indomitable rebel women, Clodomira and Lydia, tortured sadistically before they died in the custody of the police. Much of the world continues to grieve the loss to humanity of Ché Guevara, assassinated so young and with so much still to offer, but he is far from the only astonishing person who is missing, and played a role in Celia’s Revolution and her story.

Cuba has suffered so much I sometimes think of it as the country whose greatest wealth is the people’s collective experience of deeply shared emotion. All those who struggled so bravely and died, sometimes horribly, were passionately loved and appreciated by the revolutionaries they left behind, and strengthened. I believe it is the glue of this mutually lived history, and the hope of creating a free and healthy Cuba that, even today, holds the country together. In this book we see some of the cost of seeking to live one’s own way, charting and being drawn by one’s own destiny. These fallen heroes, women and men, young and old, many of them revealed for the first time in this book, are cause to mourn.

But just as much, and also as revealed in this book, cause to celebrate, or simply to admire.

Reading this story we see precisely why Fidel Castro adored Celia Sánchez and why Ché and Celia were good friends. All three of these revolutionaries were persons of the highest moral
character and integrity; deeply human also in their transgressions and imperfections, they were equals of the fiercest sort. There was also a price on all their heads.

We see something else as well: That the women of Cuba were full participants in the Revolution, combatants, covert operatives, and even co-instigators. It was in fact Celia and Haydée Santamaría who, early on and with other women, took up arms to fight the dictatorship. Celia, the daughter of a doctor, who frequently helped her father in his attendance on the poor, a society girl and high-school beauty queen, this woman who wore red lipstick, wide skirts, high heels (and would wear high heels with her rebel army uniform when she felt like it) took to the mountains of eastern Cuba with Fidel, Ché and other revolutionaries no less brave but far less known, and placed her life against the killing machine of wealth, corruption, and depravity that so insulted and wounded her beloved country.

I love this book. Biographer Nancy Stout is to be congratulated for her insightful, mature, and sometimes droll exploration of a profoundly liberated, adventuresome and driven personality. I love the life of Celia Sánchez, a life that was singular,
sui generis
, and true to its time of revolution and change in Cuban society, but also archetypal in its impact and relevance to all times of social struggle and revolt, including this one, in which Cuba’s arch-enemy, the government of the United States of America, is also experiencing transformation. To fight the demons that have overtaken us, and to lead the world back to its senses, such an intrepid woman warrior would have to exist: a Durga, a Kali. A Celia.

Saving Her Angel (Archangels) by Missy Jane
THE WAR BRIDE CLUB by LANE, SORAYA
Serving Crazy With Curry by Amulya Malladi
Deathlist by Chris Ryan
For Everly by Thomas, Raine
Prison Nation by Jenni Merritt
The Girard Reader by RENÉ GIRARD
The Story of the Blue Planet by Andri Snaer Magnason
Miracle's Boys by Jacqueline Woodson
Fractured by Amanda Meadows
Our partner