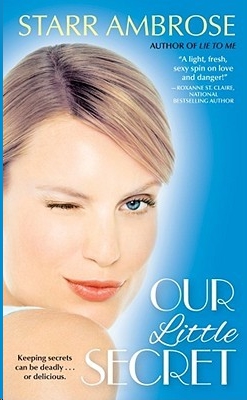 In her second romantic caper, Starr Ambrose raises the stakes
and
the heat as a woman on the trail of her missing sister teams up with the wrong—or is it right?—kind of man.

Callista smiled at Drew. “I’ll see you there,” she purred. “Come alone.”

Lauren lowered her drink and watched Callista strut away. “Wow. You’re good with sluts. You must get a lot of practice.”

She looked so genuinely impressed Drew nearly laughed. “Not that much.”

“How are you with good girls?”

His amusement died in a rush of heat, and he took a closer look at her. He didn’t know if it was the alcohol or the dancing that had raised the pink glow in her face, but he found himself suddenly imagining what it would be like to press his mouth to her flushed skin and lick the champagne off her wet lips. The flirtatious look she was giving him wasn’t making her easier to resist.

“Stop looking at me like that,” he whispered harshly.

“Like what?” The pink tip of her tongue ran over her upper lip and wide eyes blinked innocently at him.

More praise for Starr Ambrose’s debut novel,
Lie to Me

“Likeable characters and an intriguing premise.”

“Ambrose adds a welcome, bright new voice to the genre. Her lighthearted repartee imparts a special charm to this novel.”

“This book really grabs you and doesn’t let go. I was hooked from the first page.”

“In her debut novel, a light romantic suspense Starr has been born.”

This title is also available as an eBook.

Special thanks to Kevan Lyon, who saw the rough version of this story and knew what it could become.

Thanks to Abby Zidle and Danielle Poiesz at Pocket Books for their brilliant editorial insights.

For expert advice, thanks to Lori Toth and Julie Vokwinkle. Any mistakes are my own.

Thanks always to Jim, Stevie, and Ariana for too many reasons to name, and to Key, who insisted I could type while holding a cat.

Lauren Sutherland stood on the slush-covered Georgetown sidewalk and reminded herself that wrecking her sister’s marriage was the responsible thing to do.

Sisters looked out for each other—especially when one sister insisted on being an irresponsible idiot. Meg would thank her for it later.

Lauren cast a speculatve glance at the house. The red brick edifice to old money was exactly the home she would expect for the third most influential man in Washington, D.C. Meg always had been attracted to power, so that was no surprise. That was why she’d taken a job with Senator Harlan Creighton III in the first place. The lecherous creep. But marrying the elusive and infamous—not to mention much older—bachelor was a surprise even to Lauren’s jaded expectations. She already chewed through three fingernails on the plane ride.

Lauren clenched her hand into a fist, hiding the
evidence of her nervous habit. Being a good example took its toll.

A gust of wind snuck under her coat and up her skirt, reminding Lauren that she didn’t need to stand outside in the chill March air. Might as well go inside where she could warm up, get into some comfortable clothes, and confront Meg. Her sister would put up a fight, but Lauren knew the best solution was a quick annulment. Meg would see that—eventually.

Briefcase in one hand and suitcase in the other, Lauren dragged herself up the walk to the front door, weaving a path around spots of melted snow that were trying to refreeze. She would have worn hiking boots and jeans instead of her prim black business suit, but Jeff objected. Her fiancé said she had to make a good impression on the senator, and besides, the suit went with the expensive-looking red wool coat Meg had sent her. Lauren didn’t know why she should care what the senator thought when he wasn’t going to be a family member for longer than it took to get Meg to an attorney. And the expensive coat was obviously some sort of bribe to buy Lauren’s approval. Well, Meg wasn’t going to get it. What she
was
going to get was a lecture on inappropriate behavior and old men who use power and money to buy everything they want, including women.

With her indignation nicely pumped up, Lauren set down both pieces of luggage and rang the doorbell, prepared to burst her sister’s bubble.

She didn’t hear footsteps behind the heavy door, but seconds later a deadbolt clicked and the door opened. Prepared for Meg’s ecstatic grin, Lauren blinked in confusion. She stood face-to-face with a
frowning dark-haired man in worn jeans and a crewneck sweater.

He couldn’t be the hired help, not in those clothes. And he was far too young to be the senator, though his demeanor said he belonged here. Lauren’s first thought was that she had the wrong house. But she couldn’t; the limo driver dropped her here, and he certainly knew where Senator Creighton lived.

Which led to her second thought: Holy cow, why hadn’t Meg mentioned this guy? He wasn’t the type who escaped notice, especially by someone as fond of good-looking men as her sister. Lauren was certainly noticing. She noticed the flashing blue eyes full of sharp intelligence, the strong jaw implying decisive action, and the athletic build… well, a woman could spend a long time appreciating a man with a body like that. Even an engaged woman.

As she stared, the man’s expression changed, his attractive mouth curving into an ironic smile.

“Well, well, well,” he drawled in a voice as richly masculine as the rest of him. “Look who’s back.”

Before she could respond, his hand darted out, grabbed her sleeve, and he yanked her inside.

“Hey!” Startled, Lauren swatted at the hand that had already released her, and backed away until she felt the wall. She’d been right about the decisive action. He had a commanding presence, too. But she hadn’t expected a physical assault, and she eyed the man warily.

Steely blue eyes assessed her in return. He crossed his arms and planted his feet firmly in front of the door.

“What did you forget?” he asked. “The number for the offshore account?”

Lauren tried to find an appropriate response, but between his confrontational attitude and his distracting, um, distraction, all that came out was, “Huh?”

His appraisal was more frank than hers had been, and downright disconcerting as his gaze traveled her body from head to toe. She squirmed and tried to ignore the little shiver that crept across her shoulders.

“I see why he fell for you,” he finally said. It might have been flattering if he hadn’t sounded so disgusted.

“You do?” Her brain was regaining traction.

“Don’t get your hopes up. I’m not here to congratulate you on your marriage.”

“My marriage?” She suddenly understood the problem. “You think I’m Meg!” She didn’t question why this drop-dead gorgeous hunk would be angry with Meg. Her sister went through men like candy, and he wouldn’t be the first guy she’d dropped like a day-old sucker.

One dark eyebrow lifted, a good look for him. “Is this part of the game? Who do you expect me to think you are?”

He smiled, appearing genuinely amused—an even better look. “The mistaken identity routine—I thought you’d be smarter than that. Sorry, it won’t work. Gerald described you. Red coat, Pendleton scarf, medium-length dirty blonde hair.” He looked her up and down pointedly, causing a curious flutter in her stomach. “That’s you. I’ll admit the diamond ring’s a bit small, but that’s your problem.”

The last comment jolted her out of her fantasies. His description of her might be right, but his attitude was all wrong. It had always been irritating to be
mistaken for her sister, even though they were identical twins. But insulting the sensibly priced ring Jeff had picked out was crossing the line.

Flipped! (Spinning Hills Romance 1) by Inés Saint
No Safe House by Linwood Barclay
Hold U Down by Keisha Ervin
The Traveling Vampire Show by Laymon, Richard
Staying Power Book 14 in the Action! Series by GA Hauser
ROAD TO CORDIA by Jess Allison
Shattered Trust by Leslie Esdaile Banks
The Bollywood Bride by Sonali Dev
The Hot Floor by Josephine Myles
Moscow but Dreaming by Ekaterina Sedia
Our partner