Read Out of the Shadows Online 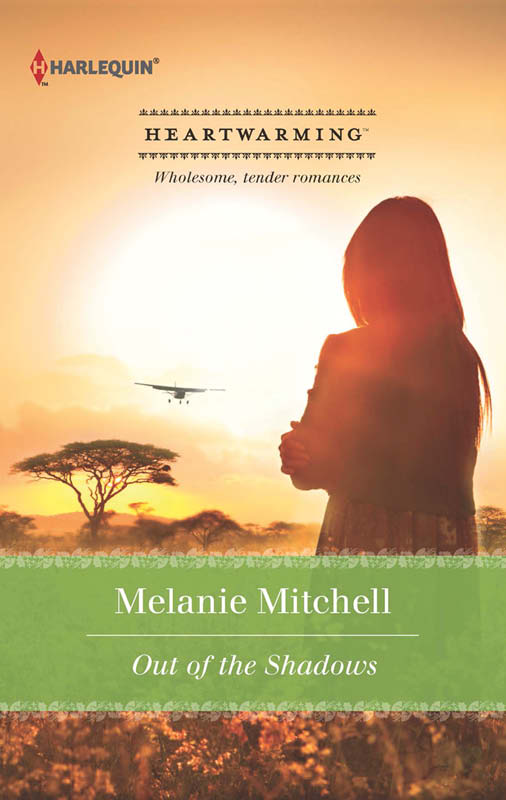 She never imagined she’d have the courage to leave everything behind and travel to Africa. Then, touched by tragedy, Leslie Carpenter finds herself devastated and alone. The health clinic in rural Kenya needs her expertise and gives her a reason to live again. Because she knows she’ll never love again.

Leslie didn’t count on being dependent on a man like Ben Murphy, the rugged bush pilot who shuttles her between villages. Ben scares her. She can see that he’s in a dangerous line of work, with no respect for the law. Despite that, she also knows he’s a good man. She really wants to trust him, to believe in a future together. Except learning his secrets may put her life at risk….

Ben regarded her with compassion, this time working hard to hide his emotions. Finally, he caught her small hand in his and brought it to his lips. “Look, you’re exhausted. Why don’t you go to bed? If you want me to stay, I can drag one of the exam cots onto the porch and sleep there.” He gave her a lopsided grin. “But if you wake up before me in the morning, just don’t mistake me for a patient….”

She managed a little smile. “Thank you, Ben. That would be perfect.” They stood in silence for a few seconds. It took all of the self-control Ben had left to refrain from taking her in his arms again. Finally, he turned to leave. At the door he paused and looked back at her. Her face was red, her eyes were swollen and her hair was mussed. She had never looked more beautiful to him.

He smiled and whispered, “Good night.”

In 1998, I was part of a team of nursing educators asked to travel to Kenya for two weeks to provide continuing education programs for missionary nurses. Most of these nurses were American or Canadian, and many had worked in Africa for years.

The missionary nurses were amazing and inspirational. During our time together, I learned about the problems they encountered in their practices, as well as the less-than-ideal circumstances in which they often found themselves. I witnessed firsthand the grateful responses of the local people to their tireless work and loving care as they did whatever they could to manage the challenging situations, cultural differences and pervasive health problems.

Out of the Shadows
grew from stories shared by the nurses, as well as my observations of the country and the people. Several of the characters are based on people I met while there. For example, the leader and unofficial head of the group of nurses was a longtime missionary from Alabama; she became the inspiration for “Mama Joe.” The Merdians—the Bible translators who play a significant role in the book—were based on a family who lived and worked in Kenya for more than twenty years. I hope I did them justice, as they deserve respect and admiration.

is a native of Texas. With her husband, Scott, Melanie has lived in Belgium, South Korea and a number of cities in the United States. She has traveled throughout the U.S., Canada, Europe, Asia, Africa and the Middle East. Melanie draws on her travels and work abroad to bring a variety of settings, experiences and an understanding of different cultures into her work.

Melanie has been a registered nurse for many years and currently teaches nursing in the Houston area. While she has written extensively—nursing textbooks and articles—she recently turned to her love of romantic suspense with
Out of the Shadows,
her debut novel.

To Scott, my support and inspiration
(also a darned good pilot).

Gaily bedight,
A gallant knight,
In sunshine and in shadow,
Had journeyed long,
Singing a song,
In search of Eldorado.

But he grew old,
This knight so bold,
And o’er his heart a shadow
Fell as he found
No spot of ground
That looked like Eldorado.

And, as his strength
Failed him at length,
He met a pilgrim shadow;
“Shadow,” said he,
“Where can it be,
This land of Eldorado?”

“Over the Mountains
Of the Moon,
Down the Valley of the Shadow,
Ride, boldly ride,”
The shade replied,
“If you seek for Eldorado!”

B
RIAN
C
ARPENTER
GAZED
at his wife’s reflection in the mirror as he fumbled with the knot on his tie. She was sitting cross-legged on the bed, looking frustrated, restless and lovely.

“What would you like me to bring home for supper?”

“I don’t know. I’m tired of takeout, and I’m starting to resemble a whale.” Leslie frowned and shifted restlessly. “If I don’t get out of this bed soon, I’ll go crazy.”

Brian decided the tie was neat enough and fastened the buttons on his collar. “Well, the bed rest won’t last more than a week or two. Isn’t that what your OB said?”

She wrinkled her nose and sighed. “That doesn’t help me feel any better.”

He sat beside her and gently brushed his fingers across her cheek. Despite her pregnancy, or perhaps because of it, she was beautiful. Her complexion was a little lighter than normal, enhancing her remarkable deep blue eyes. Her glossy brown hair seemed even curlier, and her skin practically glowed. He sympathized with her frustration, though, knowing that being confined the past ten days had been hard for her—she was active by nature and loathed relinquishing the care of their two-year-old daughter to anyone else.

“Not this morning.” She brought her hand to her belly as if she could feel the baby growing. “Maybe everything is all right now. Maybe I can...”

“Not so fast.” Brian placed his hand over hers. “The doctor said you could slowly resume normal activities—not start running a marathon—after the bleeding has stopped for at least twenty-four hours.”

She slumped back on the pillows and frowned again. “I know.”

“Honey,” he said, forcibly upbeat, “you’re only ten weeks along. Give the baby a chance to get stronger. Then there will be less chance of a miscarriage.”

“Thank you,
Dr.
Carpenter.” Although her tone was mildly sarcastic, she smiled at him. “You’re right, of course. It’s worth it.” Leslie adjusted the lightweight quilt to cover her legs. “I just hate being useless.”

Sensing that the worst of the current minicrisis had passed, Brian changed the subject. “You’re sure your mom can pick Emma up from day care?”

“Yes, positive. The only reason you have to take her this morning is because Mom has a dental appointment.”

“Good. I won’t worry about leaving early to come home.” He squeezed her hand. “Can I get you something to eat?”

Leslie shook her head. “No. Thanks.” Her smile turned to a grimace. “Right now the thought of food makes me gag.”

Brian stood. “Okay, I can’t make you.” He snagged his car keys from the dresser and shoved them in his pocket. Glancing at her from the foot of the bed, he said, “Now, about supper...”

“I’ll talk to Mom. She may have planned to fix something.” Leslie flashed a wry smile. “She’ll disown us if we give Emma any more junk food. I’ll call you this afternoon and let you know. Okay?”

Brian nodded and walked back to her. He leaned forward to kiss her lightly on the lips. “We’d better be off. My first patient is scheduled for eight-thirty, and I need to run by the hospital to make rounds before that. Emma,” he called at the door. “Come kiss Mommy goodbye.”

In seconds, the towheaded little girl came bouncing into the room, dressed in denim overalls and a red T-shirt. Although Leslie had combed her hair earlier that morning, it was already falling into disarray. She repositioned Emma’s barrette before kissing her head.

“Be good at school, and remember that Nina will pick you up about lunchtime.” The toddler nodded and giggled.

“All right, baby,” Brian interrupted. “Let’s go. Hop in your car seat, and I’ll buckle you in.” Leslie gave Emma another peck on the cheek, and the toddler ran out of the room, heading for the kitchen door leading to the garage. Brian leaned over and kissed his wife again. “Do you need anything before I leave?”

Leslie pointed to her laptop and the pile of books beside the bed. “No, thanks. I’ve got plenty to do. I need to grade some papers and read a little. I’ll be able to stay sane for a while.”

He grinned. “I love you. Call me later.”

B
Y
TEN
O
’
CLOCK
Leslie was bored. Since she was allowed to go to the bathroom and take occasional trips to the kitchen, she fetched a glass of lemonade and was headed back upstairs when the doorbell rang.

She frowned. It was rare for anyone to come to the house during the day. In keeping with the directives of her obstetrician, she slowly walked to the front door. Peering through the peephole, she saw two uniformed police officers accompanied by a man in a dark suit.

Police?
Her thoughts raced, and her heart rate rose. Her hand was trembling slightly when she opened the door.

The expressions on the faces of the three men accentuated her fear. One of the uniformed officers spoke. “Ma’am, I’m Sergeant Hunton, from the Dallas Police Department. Are you Mrs. Carpenter?” His voice was slightly tremulous.

Leslie felt the blood leave her face. She gave a tiny nod.

The man in the suit said, “Mrs. Carpenter, I’m Jerry Zeiger, one of the chaplains for the DPD. Can we come in?”

Leslie’s legs were wobbling so badly she barely managed to step aside to let the men in. The chaplain took her arm and led her into the living room. “Please sit down, ma’am.”

She glanced toward the two uniformed officers, who remained standing just inside the door. Neither looked at her. Her hand was visibly shaking now as she reached out to move a cushion before sitting on the edge of the sofa.

T
HE
CHAPLAIN
SAT
beside her and took her hand in his; hers was icy. He had to force himself to look at her directly. “I’m so sorry,” he said in the quiet, calm tone common among clergymen. “We have some bad news.... There was an accident. A delivery truck ran a red light and collided...” He paused and watched the young woman with growing concern. At that moment, he actively hated his job. He sighed, then said, “Ma’am, your husband’s car was hit and he was killed instantly.”

Leslie shook her head from side to side. She swallowed twice before she managed to whisper, “Emma?”

The chaplain held on to her hand, trying to give even a small amount of support. He no longer looked at her directly; instead, he stared at their hands. “Mrs. Carpenter, I am so sorry, but the little girl was killed, too.”

Even though he was expecting it, Zeiger was still affected by the wrenching sound of her sob. Pulling away from him, the young woman doubled over and buried her head in her hands. He wanted to comfort her, but he knew she would find little solace for a long, long time. And he understood too well that she’d never forget this moment. She would never totally recover.