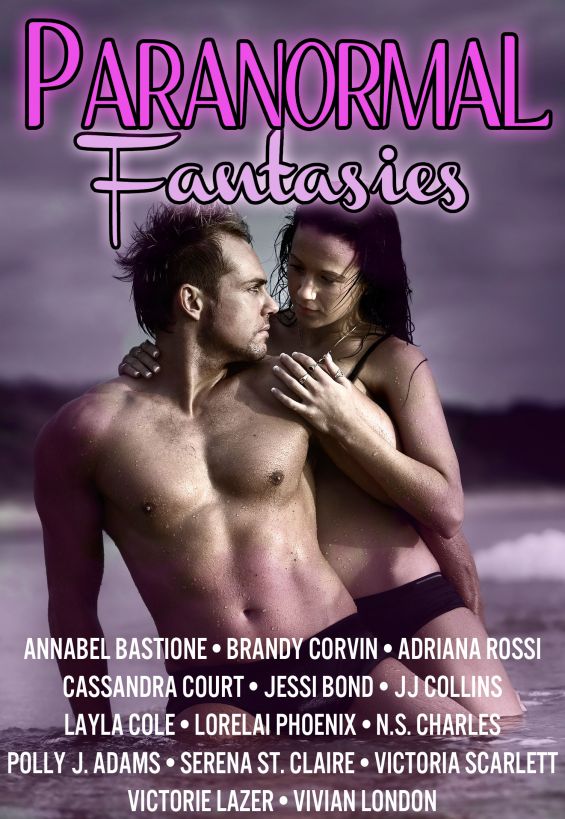 Copyright © 2012
by the relevant authors

This book is a
work of fiction and any resemblance to persons, living or dead, or
places, events or locales is purely coincidental. The characters
are productions of the author’s imagination and used
fictitiously.

This ebook is licensed for your personal enjoyment only. This
ebook may not be re-sold or given away to other people. If you
would like to share this book with another person, please purchase
an additional copy for each recipient. If you’re reading this book
and did not purchase it, or it was not purchased for your use only,
then please return to the seller website and purchase your own
copy. Thank you for respecting the hard work of this
author.

Pack Pals in Treeing Some Cooch by Annabel
Bastione

When the
werewolf and his stepbrother Stefan enter the spooky forest intent
on passing through, they did not count on meeting a hostile Dryad,
Lillian who uses vines like tentacles! How far will they go as
Lillian's 'plaything' so that she allows them to pass through the
forest unharmed?

Fangs of Desire by Brandy Corvin

Feeling
buzzed from all the cocktails she drank at the bar, Jessica gets
picked up by a stranger handsome beyond her wildest dreams! Back at
his place, he confesses before they do anything, that he's actually
a... vampire? Now that she knows, will Jessica refuse her one-night
stand, or is too tipsy to care? This is the first title in the
'Fangs of a Vampire' trilogy.

The Shadow of the
Wolf by
Adriana
Rossi

Robert
has just settled into a quiet, forest town to begin his career as a
novelist. After a frightening encounter with a wolf, a handsome
stranger appears at his door asking questions about his nasty
bite.

It's hard
to make a living as a professional vampire hunter these days, but
Jen's not in it for the money! She's got her prey cornered, and she
won't let him go until she's gotten exactly what she wants... and
he's loving every second of it!

Fuck on
the Wild Side by Jessi Bond

Fiction
editor Matt Bartlett has a secret. Once a month, a strange fever
takes him and leaves him crazed and sex-starved, no matter how much
he gets. But what will happen when he goes into heat while trapped
in his apartment with flighty novelist Jack Archer, bane of his
existence? And what secrets is Jack hiding when the full moon comes
around?

As the
alpha male of his werewolf pack, Malcolm is responsible for them --
including discipline. When a rogue omega male is captured,
Malcolm's duty is to instruct him as to who the alpha is and put
the errant were in his place. Sometimes, it's good to be the
alpha.

Shared
by Vampires by Layla Cole

When
vampire Doms Jonathan and Eric get their hands on a new sub, they
are eager to break her in. Rose made it through her first night
with them, but will she be able to handle it when they take her for
the first time?

Rescued
from violence by a dark angel, Lilith is sequestered in a tower,
safe from the evils of the world. She is drawn to the mysterious
stranger, but can she overcome her fears to express her love to the
man who saved her soul?

The Hunt by
N
.S. Charles

A battle
with the fearsome denizens of the dead sees the warrior Dalin with
a new charge, the beautiful Anessa, a maiden eager to please. But
something just doesn’t seem right. When things begin to take a turn
for the worse, can Dalin resist Anessa’s alluring, yet supernatural
charm?

When
Caleb, a new werewolf with no pack, helps rescue Alex from a bear
attack, Alex offers to introduce him to the pack. But first, the
alpha's need to make sure Caleb is really pack material.

Riding the Snake by Victoria Scarlett

Krana's
village sends him up a mountain with an offering to their god. What
they don't tell him is that HE is the offering.

Mark is
determined to get to the bottom of his boyfriend's dark secret, but
when he decides to snoop and stumbles in on a growling werewolf, he
realizes that secret was darker than he'd ever imagined!
Fortunately, he's got a trick up his sleeve: He's a professional
dog-trainer!

Cry
of the Wolf by Vivian London

Alois is
an innkeeper with a dark secret: he's a werewolf. He's managed to
hide it from the rest of the village for years. But when a rogue
werewolf kills a villager, it attracts the attention of the bounty
hunter, Adlar, and threatens to expose Alois' secret.

However,
Adlar has a secret of his own...

Pack Pals in Treeing Some
Cooch

The forest loomed over us,
its presence an overshadowing power, as if we were merely
worshippers to the trees that reached heavens above. I peered into
it, trying to see beyond the few trees and thick undergrowth that
concealed its secrets. My instincts telling me there was something
dangerous lurking in it.

"You're sure this is the
only way?" I asked.

"According to the map,
yes," my stepbrother Stefan replied.

Damn, I cursed silently. We
had just started out on our journey to find Stefan's father, my
stepfather, Louis and lying ahead would be our first challenge.
Granted it was Louis that first gave Stefan, and subsequently I,
this great gift, this powerful curse that could help us overcome
any adversary. But still, the lack of experience growing up in the
world made me fearful of it and what was to lie ahead.

"Alright then, you
ready?"

I nodded. We had no choice,
and I was eager to see how my transformed body fared in new
environments. I watched as Stefan took off his shirt, revealing a
toned, muscular body riddled with scars from previous altercations.
The scars did nothing but to make his body even more beautiful in
my opinion. I took my shirt and dropped my provisions at one
side.

Letting myself relax as my
mind drew a blank, I let my animalistic instincts and urges take
over me as I felt that strange, yet all too familiar feeling over
transformation. Before I knew it, I held up my hands and saw the
claws on my paws. I turned to Stefan, he too had transformed into
the most handsome werewolf I had seen.

Granted, it was the middle
of day, but we were always more like shape shifters than actual
werewolves. We were still in control of ourselves, unlike our feral
cousins that have lost all reason, hiding in the wild and only
transforming during a full moon. Like I said, they have lost
control.

My senses told me that we
were alone and that no one had seen us. Good. Werewolves were
ostracized by the human community in general. I knew it firsthand,
where my father participated in a hunting trip commissioned by the
village chief to take down the werewolf. Sadly, it was my father
that ended up being the prey.

I smirked at the thought,
how ironic that the one creature my father spent his whole life
fighting would end up being his own son?

"Ready?" Stefan grunted. Of
course, to regular humans a werewolf's speak would seem at best,
barking and at worse, a blood curdling howl. But since I gained the
ability, I could understand the language of not just other
werewolves, but the normal wolves clearly too.

"Yea," I howled as we both
headed into the forest in quick, light steps. We were agile as
hell, and had spent the first two years, when our village had yet
to know our terrible secret, training and playing in the nearby
woods. We climbed over fallen logs, ran through the treetop
canopies, played extreme games of hide and seek and tag amongst
other things. I can safely say I am thankful of those times because
they helped me shape the agile me that I am today.

Running through the forest,
Stefan climbed up a tree and began making his way through the
treetops, using tree branches with masterful, light steps. Because
I was tougher and better at combat, I, on the other hand, preferred
to stick to the ground where Stefan could warn me of impending
danger and I could fight whoever dared cross our paths.

The forest twisted and
loomed. The dense undergrowth soon cut off the line of sight from
each other. Even so, our enhanced senses still managed to let us
track each other's position. You do not spend years training with
someone as close to you as your stepbrother without having his
scent firmly imprinted in your memory.

I heard a howl in the
distance. I stopped, it was Stefan's voice. It was not his usual,
confident, husky voice, but one of confusion, curiosity and even, a
slight hint of terror. Strange, for him to signal for help like
that, it must be something unexpectedly powerful. I barged my way
through the undergrowth, following his scent and the direction of
his voice.

Through the undergrowth, I
could hardly see three feet in front of me, too much plant life in
the way. But when I emerged into a clearing, the world suddenly
seemed strange. I looked around, vines of poison ivy seemed to
dominate the place, snaking its way up trees, forming the pavement
on the ground. Strange, the way it moved, and at such an inhuman
speed too, would make any being think that it was either magic or
alive. I saw Stefan up ahead, standing there motionless.

He did not move, it was as
if he did not even register my presence.

This was beyond strange. I
approached with caution.

Apart from our entire
environment, there was nothing strange about the place. My ears
heard nothing unusual and my eyes detected nothing out of the
ordinary. My nose sensed no other living being, only the increasing
weird smell that reminded me plant-based poisons.

Wait, poison?
My eyes widened at
the realization as I frantically stopped myself from proceeding
further.

I turned around and tried
to get away as fast as possible, but suddenly found my body too
heavy and weak to move. What was happening to me? Did the poison
enter my system through the air? How can it react so
fast?

My run turned into a
stagger as my gait became awkward.

Blue Movie by Terry Southern
Wings by Patrick Bishop
La muerte del rey Arturo by Anónimo
A Confederacy of Dunces by John Kennedy Toole
Rosshalde by Hermann Hesse
The Lost Code by Kevin Emerson
Voracious by Wrath James White
Keeping Watch: Heart of the Night\Accidental Bodyguard by Wilson, Gayle
Ghostly Realm - Not Even Death Could Separate Them by Kelley, Cindy J.
Year of the Dog by Shelby Hearon
Our partner