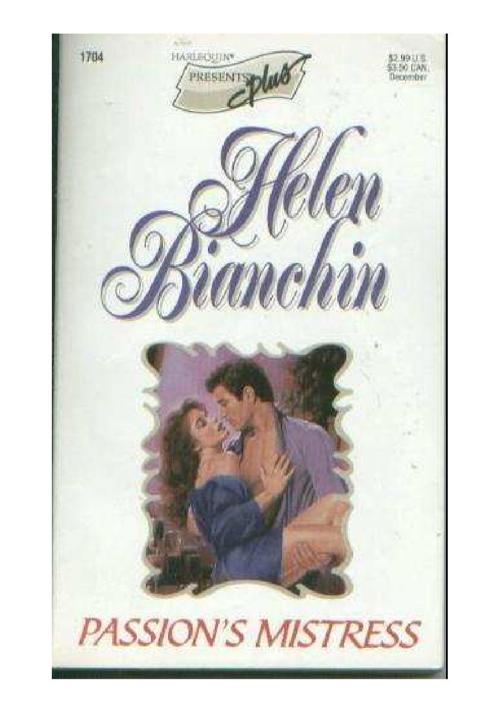 How much would a mother sacrifice for her child?

Carly Taylor had made it on her own for six years, raising her daughter and

hiding from the heartbreaking memories of the husband who d betrayed her.

But when her daughter's life was threatened, Carly was desperate enough to

go to the man she'd tried to forget and ask for his help.

child, he was determined to wield that power ruthlessly. He gave Carly one

option: return to his home and to his bed.

And that was where the danger lay. For once Carly was locked in Stefano's

embrace, the world would cease to matter. For how could she fight the sheer

force of a man whose greatest weapon was the desire she felt for him?

soft balmy breeze drifting in from the sea.

An evening more suited to casual entertainment outdoors than a formal

gathering, Carly mused as she stepped into a classically designed black

gown and slid the zip in place. Beautifully cut, the style emphasised her slim

curves and provided a perfect foil for her fine-textured skin.

height, whose natural attributes were enhanced by a glorious riot of

auburn-streaked dark brown curls cascading halfway down her back.

classically tailored clothes she chose to wear to the office.

Indecision momentarily clouded her expression as she viewed her pale,

delicately boned features.
Too
pale, she decided, and in a moment of utter

recklessness she applied more blusher, then added another touch of

eyeshadow to give extra emphasis to her eyes.

There, that would have to do, she decided as she viewed her image with

critical appraisal, reflecting a trifle wryly that it was ages since she'd

arranged for the express purpose of affording a valuable new client

introduction to key personnel, and only her employer's insistence had been

instrumental in persuading her to join other staff members at his house.

'All done,' she said lightly as she turned towards the small pyjama-clad girl

sitting cross-legged on the bed: a beautiful child whose fragility tore at

Carly's maternal heartstrings and caused her to curse silently the implicit

'You look pretty.' The voice held wistful admiration, and a wealth of

'Thank you,' Carly accepted gently as she leant forward and trailed slightly

shaky fingers down the length of her daughter's dark, silky curls.

Tomorrow the waiting would be over. In a way, it would be a relief to know

past few months. The round of referrals from general practitioner to

paediatrician, to one specialist and then another, the seemingly endless

number of tests and X-rays had proven emotionally and financially draining.

If Ann-Marie required the skills of a surgeon and private hospital care...

Silent anguish gnawed at her stomach, then with a concentrated effort Carly

dampened her anxiety and forced her wide, mobile mouth into a warm smile

as she clasped Ann-Marie's hand in her own.

'Sarah has the telephone number if she needs to contact me,' she relayed

gently as she led the way towards the lounge.

Leaving Ann-Marie, even with someone as competent as Sarah, was a

sense of guilt and warred violently with any need for divided loyalty. Yet her

work was important/ the money earned essential. Critical, she added

Besides, Ann-Marie couldn't be in better hands than with Sarah, who, as a

nursing sister at the Royal Children's Hospital, was well qualified to cope

with any untoward eventuality.

'The dress is perfect.'

Carly smiled in silent acknowledgement of the warmly voiced compliment.

The attractive blonde rose from the sofa with unselfconscious grace. 'Your

hair looks great. You should wear it like that more often.'

'Yes,' Ann-Marie agreed, and, tilting her head to one side, she viewed her

mother with the solemn simplicity of the very young. 'It makes you look

'Sophisticated,' Sarah added with a teasing laugh as she collected a book

from the coffee-table. It was a popular children's story, with beautiful

illustrations. 'Ann-Marie and I have some serious reading to do.'

her own, if only momentarily.

neighbouring apartments—each fleeing her own home town for differing

reasons, and each desperate for a new beginning.

'I won't be away any longer than I have to,' she assured quietly, then she gave

Ann-Marie a hug, and quickly left.

In the lobby, Carly crossed to the lift and stabbed the call-button, hearing an

answering electronic hum as the lift rose swiftly to the third floor, then just

as swiftly transported her down to the basement.

The apartment block comprised three levels, and was one of several lining

and basement car park, the only visual difference being a variation in the

grassed verges and gardens, dependent on the generosity of any caring

Carly unlocked her sedan, slid in behind the wheel and urged the aged Ford

on to street level, taking the main arterial route leading into the city. It was

almost seven-thirty, and unless there were any delays with traffic she should

arrive at the requested time.

Acquiring Consolidated Enterprises had been quite a
coup
, for Mathorpe

concrete and glass spires vying for supremacy in a city skyline, followed

within minutes by an uninterrupted view of the unique architectural

masterpiece of the Opera House.

It was a familiar scene she'd come to appreciate, for it was here in this city

that she had developed a sense of self-achievement, together with an inner

satisfaction at having strived hard against difficult odds and won. Not

handsomely, she admitted a trifle wryly, aware of the leasing fee on her

apartment and the loan on her car.

Carly gave a silent sigh of relief when she reached Rose Bay.

Locating her employer's address presented no problem, and she slid the car

to a halt outside an imposing set of wrought-iron gates.

Minutes later she took a curving path towards the main entrance, and within

It was crazy suddenly to be stricken with an attack of nerves; mad to

consider herself a social alien among people she knew and worked with.

Soft muted music vied with the chatter of variously toned voices, and Carly

cast the large lounge and its occupants an idle sweeping glance. Without

bow-ties, while the women had each chosen stylish gowns in a concerted

Within minutes she was offered a drink, and she managed a slight smile as

Bradley Williamson moved to her side. He was a pleasant man in his early

His roving appraisal was brief, and his eyes assumed an appreciative sparkle

as he met her steady gaze. 'Carly, you look sensational.'

'Bradley,' she acknowledged, then queried idly, 'Has Clive's honoured guest

His voice took on an unaccustomed dryness. 'You're hoping he'll appear

soon and let you off the figurative hook.'

It was a statement she didn't refute. 'Maybe he won't come,' she proffered

absently, and caught Bradley's negative shake of the head.

'Doubtful. Mathorpe revealed that the director favours a personal touch in all

his business dealings. "Involvement on every level" were his exact words.'

'Which explains why the company has achieved such success.'

Bradley spared her a quizzical smile that broadened his pleasant features

into moderate attractiveness. 'Been doing your homework?'

Her answering response was without guile. 'Of course.'^ Figures,

projections, past successes had been readily available. Yet mystery

with regard to his identity.

'Such dedication,' he teased. 'The way you're heading, you'll be the first

woman partner in the firm.'

His interest quickened. 'You can't possibly be considering resigning in

'No,' Carly disclaimed. 'I merely expressed the observation that Clive

Mathorpe has tunnel vision, and, while an accountant of the feminine gender

is quite acceptable in the workforce, taking one on as a partner is beyond his

personal inclination.' A faint smile tugged the corners of her generously

moulded mouth. 'Besides, I'm comfortable with things as they are.'

He absorbed her words and effected a philosophical shrug. 'Can I get you

'Thank you. Something long, cool and mildly alcoholic.' She smiled at his

expression, then added teasingly, 'Surprise me.'

Carly watched Bradley's departing back with an odd feeling of restlessness,

accuracy, almost as if the man in her life possessed an ability to see beyond

the windows of her mind right to the very depths of her soul. Those were the

days of love and laughter, when life itself had seemed as exotic and ebullient

as the bubbles set free in a flute of the finest champagne.

Entrapped by introspection, Carly fought against the emergence of a vision

so vivid, so shockingly compelling, that it was almost as if the image had

Italian Marriage: In Name Only by Kathryn Ross
The Terrorist Next Door by Sheldon Siegel
Wicked Brew by Amanda M. Lee
No Worse Enemy by Ben Anderson
Between The Sheets by Caddle, Colette
Zomblog by Tw Brown
The Wrong Billionaire's Bed by Jessica Clare
Slow Hand by Michelle Slung
Wild at Heart (Walk on the Wild Side #1) by Lara Archer
Sapphic Embrace: The Housewife by Kathleen S. Molligger
Our partner