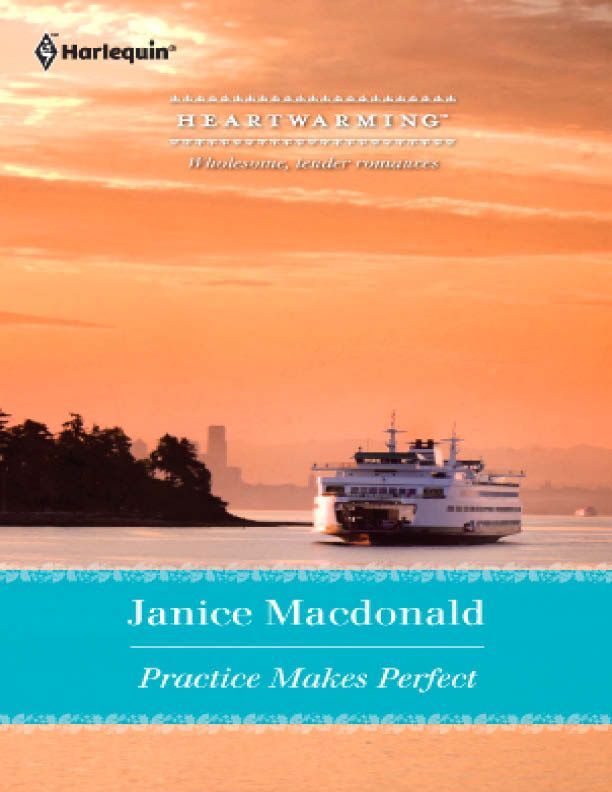 He was the man she thought she’d left behind...

Dr. Sarah Benedict had tried—but failed—to forget Matt. Even after marrying another man and moving to Central America, she couldn’t shake the memories of her childhood friend. She’d grown to realize she loved Dr. Matthew Cameron deeply.… Yet to him, she was only the best buddy a guy could ever have.

But now Sarah’s moving back to Port Hamilton a widow. And Matt’s divorced....

Can the two best friends get past their polar opposite approaches to medicine—not to mention Matt’s interfering teenage daughter—to find love…fifteen years late?

Home, family, community and love. These are the values we cherish most in our lives—the ideals that ground us, comfort us, move us. They certainly provide the perfect inspiration around which to build a romance collection that will touch the heart.

And so we are thrilled to have the opportunity to introduce you to the Harlequin Heartwarming collection. Each of these special stories is a wholesome, heartfelt romance imbued with the traditional values so important to you. They are books you can share proudly with friends and family. And the authors featured in this collection are some of the most talented storytellers writing today, including favorites such as Brenda Novak, Janice Kay Johnson, Jillian Hart and Patricia Davids. We’ve selected these stories especially for you based on their overriding qualities of emotion and tenderness, and they center around your favorite themes—children, weddings, second chances, the reunion of families, the quest to find a true home and, of course, sweet romance.

So curl up in your favorite chair, relax and prepare for a heartwarming reading experience!

When she’s not traveling—which she does whenever she can—Janice Macdonald lives in Port Angeles, Washington.

T
HE
GUY
SELLING
medicinal herbs at the Port Hamilton farmer’s market had shoulder-length hair, a small stud in his nostril and the palest blue eyes Sarah had ever seen. The lack of color disconcerted her. Something about the way the light hit them made it difficult to tell whether he was looking directly at her or at something over her shoulder.

His T-shirt read Stop The War On Drugs, but when he noticed her trying to read the small print, he stopped in the middle of a discourse on the health-giving properties of the dandelions leaves he was holding to launch into another on the kind of drugs he was trying to stop.

“Big Brother pharmaceutical companies,” he said, his British accent becoming more pronounced as he spoke. “If you’re popping pills you’ve bought from the drugstore, you’re not really in touch with nature, and my goal, simply put, is to reconnect people’s consciousness with the environment.” He waved his hand at the row of baskets brimming with plants. “Nature’s pharmacy,” he said. “Echinacea, Saint-John’s-wort, calendula.
Atropa belladonna
—”

He smiled. “Ah, a gardening enthusiast.”

“A medical doctor, actually,” Sarah’s mother, Rose, said, materializing at Sarah’s side. “She’s been practicing in Central America for the past fifteen years. And, let me tell you, she knows a thing or two about woo-woo medicine.”

Sarah shot Rose a glance. “A focus on prevention and well-being rather than disease is not woo-woo medicine.” She turned back to the guy, whose spare, almost emaciated frame suggested nature’s pharmacy probably did double duty as his pantry. “My mother’s a doctor, too.” She jerked her head at Rose. “Runs in the family. Except my mother’s the conventional kind.”

“I was referring to your profession. She’s a dermatologist,” Sarah said, mostly to mollify Rose, who disliked being thought of as conventional in any way, except perhaps in her approach to medicine.

“Right.” He stuck out his hand and directed his pale eyes at Sarah. “Curt Hudelson.”

“Sarah Benedict.” She shook his hand. “And my mother, Rose Benedict. I’m really interested in what you’re doing. It ties in with the sort of thing I’m planning, an integrated approach that combines both conventional and alternative medicine.”

He nodded approvingly. “Right, well, we definitely need more of your type here on the peninsula before big medicine kills everyone off.” As he talked, a young woman who had been waiting on customers came over to stand beside him and he put his arm around her shoulders. “My girlfriend, Debbi. We farm a piece of land on the west end. These two ladies are doctors,” he said. “Tell them how we cleared up your asthma with natural stuff.”

Debbi smiled. “I used to get these really bad attacks, I was always at the E.R. getting treatments so I could breathe and I never went anywhere without my inhaler. Then I met Curt. I haven’t had a bad attack since.” She reached into a small tin box on the wooden counter, withdrew a card and handed it to Sarah. “I also make cosmetics. Natural.”

“Well, that’s where I work right now,” Debbi said. “But I’m probably going to quit pretty soon. It’s too far to drive. Plus, Curt needs help on the farm. His business is really growing.”

“No, it isn’t.” He addressed Sarah, “Our daughter was having intestinal problems, which, naturally, Dr. Big Medicine diagnosed as kidney failure and, left to his own devices, would have had her hooked up to a dialysis machine. And how was she this morning, Debbi?”

“Come out and see my gardens sometime,” Curt said. “Debbi and I had intended to organize them according to the various systems of the body, but then it got a wee bit too complicated, so now we have them grouped into historic herbal remedies, folk medicine, homoeopathic medicinals and plants that are currently under investigation by drug companies.”

“Crackpot,” Rose muttered after Sarah had taken down his address and she and Rose were weaving their way back through the crowd toward the car. “Perfect example of how a little medical knowledge can be a dangerous thing.”

Sarah shrugged. “I’d be interested in seeing what they’re doing.”

They walked along in silence for a while. “I thought you might have changed, being away all this time,” Rose said finally. “Maturity, and so forth but you’re still just like your father.”

“Impractical and naive, not that there isn’t room for some of this hippy-dippy stuff,” she amended as they reached her ancient Volvo, parked behind the courthouse, “but it does seem to attract the fringe element.”

“In the same way that conventional medicine seems to attract those with an unhealthy interest in making money?”

“Get in the car,” Rose snapped.

“I
ANSWERED
A
PAGE
for you, Dr. Cameron,” one of the nurses said, opening the door to the O.R. where Matthew had just finished surgery.

“Administration. Mr. Heidenreich said he had you down on his calendar at ten. I told him you had an emergency surgery.”

“Thanks.” Matthew removed his blue cotton cap, pulled on a white lab coat over his scrubs and started down the corridor. He glanced at his watch—twenty after. Emergency surgery was an acceptable excuse for arriving late, but these days he was late for everything.

“No thanks.” Matt dropped into a chair opposite. A small, dapper man with sparse white hair, Jim had aged visibly in the six months since Compassionate Medical Systems had initiated efforts to buy out Peninsular Memorial.

“One of the nurses said there was someone outside SuperShop yesterday getting signatures,” Matthew told his boss, then instantly regretted the remark. Jim didn’t need anyone confirming what he already knew: That some anonymous conglomerate from Seattle taking over the hospital where just about everyone here had been born, was about as welcome as learning that Port Hamilton High’s football team had lost to Olympia. No one wanted outsiders taking over the hospital.

“Take a look at this.” Jim reached into his desk and brought out a glossy press kit. “Compassionate Medical went into a one-hundred-twenty-five-bed hospital in Oregon—same size as ours and in the same financial hole. They were welcomed with open arms. Happy to have CMS come in…like a guardian angel when you think about it. They provide the capital, recruit physicians. They’ve got the managed care expertise, the experience running rural facilities…”

Matt shrugged. “On the other hand, I know a guy in Virginia—we were in medical school together. His local hospital was gobbled up by—” he gestured at the press kit “—one of these conglomerates. He’s frustrated by it all. Endless paperwork, restrictions on where he refers patients. Diagnostic workups according to cost.”

Matt shook his head. He’d pulled together a group of physicians with the idea that among them, they would raise enough capital to counter CMS’s offer. Still, it would be difficult to pull off. Peninsula was drowning in red ink and none of the medical staff were exactly rolling in money. You practiced medicine on the peninsula because you loved the natural beauty and small-town lifestyle, not because you expected to make money. He tried to imagine his ex-wife’s reaction if he approached her about selling the home she and Lucy lived in. The home he still made payments on.

“I had a meeting with human resources this morning,” Jim said. “Their concern was lost jobs. Naturally. And the rumor mill is running full-time. I managed to convince them that for the first two years no jobs would be cut. CMS guaranteed it.”

“Two years is a long time.”

“The physicians will walk,” Matt said. “I’ve heard that from almost everyone. They’ll move off the peninsula if they have to.”

“Not if you come around.”

Matthew blinked. “If I—”

“Matt, if you get behind this takeover, the other physicians will fall in step. You know that.”

The administrator shifted some papers around on his desk. “Where were you last weekend?” He looked directly at Matthew. “Your daughter’s birthday, wasn’t it? Thirteenth?”

“My point is that you were in Seattle performing surgery. Sure, you could have referred the kid like any other physician would have done, but not you. The kid’s your patient and you’re going to see it all the way through. Your patient, your responsibility.”

“So your daughter spent her birthday without her father. She’s your responsibility, too, Matt.”

“I’m not finished. That’s last weekend we were talking about. What about last night?”

“I’ll tell you. You were right here, three floors below doing an emergency appendectomy. And today, same thing.” He got up and walked to the window. “You’re one surgeon, Matt. A terrific one, but you’re not Superman. You need a day off every once in a while. And that’s never going to happen the way things are right now. Compassionate Medical Systems is not only going to save this hospital from going under, it might save you from burning yourself out before you reach fifty.”

“Well, when you figure out what the answer is, you let me know. But I won’t hold my breath. You need to take a cold hard look at the way things are right now. Wanting things to work as they always have isn’t enough.”

An hour later, scrubbing up for surgery, Matthew was still hearing Heidenreich’s words.

Dying to Tell by Robert Goddard
The Accidental Life of Greg Millar by Aimee Alexander
Rebel: The Blades of the Rose by Zoë Archer
The Sookie Stackhouse Companion by Charlaine Harris
Hello God by Moya Simons
Witch of Christmas Past by Kendra Ashe
The Good Student by Espino, Stacey
The Terrorist Next Door by Erick Stakelbeck
Shadow Hunter (The Execution Underground) by Kait Ballenger
All That Followed by Gabriel Urza
Our partner