Read Queer and Loathing: Rants and Raves of a Raging AIDS Clone Online

Queer and Loathing: Rants and Raves of a Raging AIDS Clone 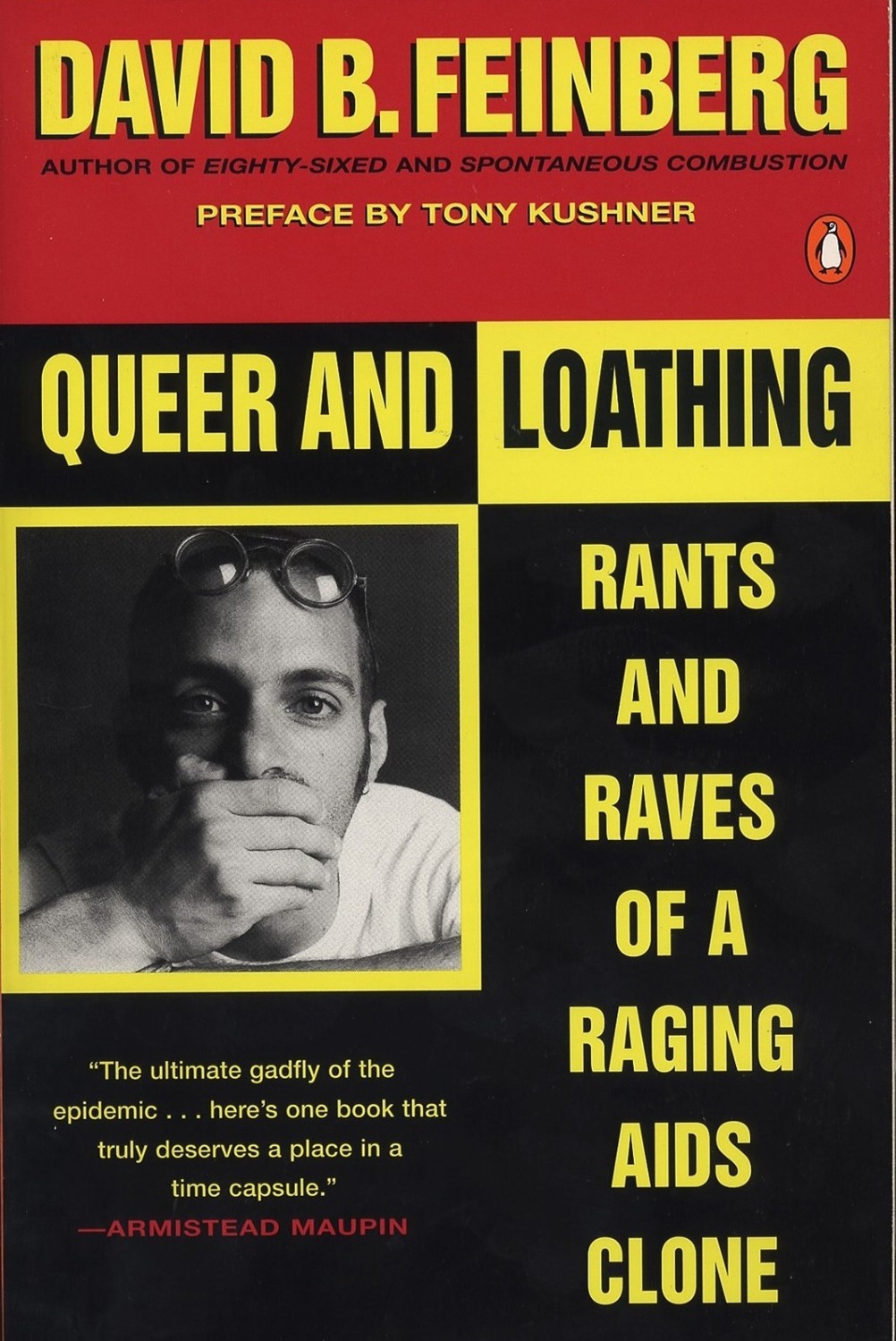 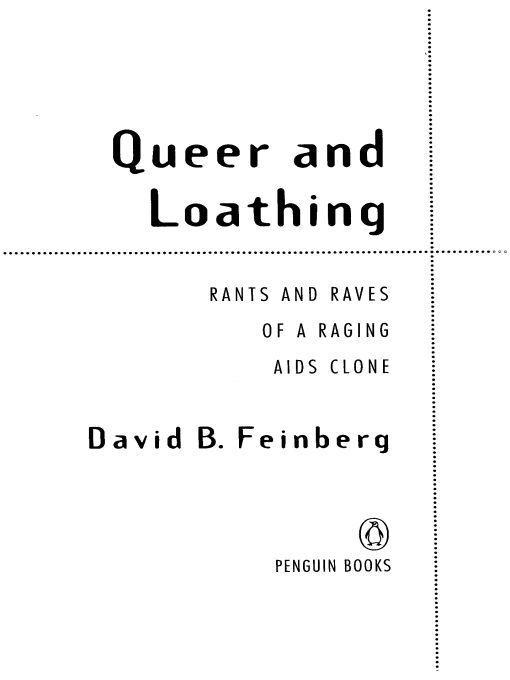 Table of Contents
Title Page
Copyright Page
Dedication
Preface
Introduction
Part One - Queer and Loathing
Queer and Loathing at the FDA: Revolt of the Perverts
Part Two - Life in Hell
Etiquette For the HIV-Antibody-Positive
Notes From the Front Lines: Writing about AIDS
Tales From the Front
Direct Mail From Hell
Sex Tips For Boys
AIDS and Humor
April Fools
Bleeding Gums From Hell
100 Ways You Can Fight the AIDS Crisis
Cocktails From Hell
Nam Yoho Renge Kyo
Needles and Pins
Notes on Sex
Waiting for the End of the World
Warts From Hell
The Day From Hell
The Canals oF Mars
How to Visit Someone in the Hospital with a Terminal Disease
Memorials From Hell
How to Make a Will
Everything You Do Is Wrong
Miss Letitia Thing’s New Guide to Excruciatingly Correct Behavior For the Dying
A Season in Hell
David P.
On the Drip
The AIDS Clone vs. the New Clone
Wide Sargasso Sea
Notes on Death
You Can’t Wear a Red Ribbon IF You’re Dead
Death before Forty
The Gastronomic Me
Ethical Suicide Alternatives
Political Funerals
Death Be Not Proud
Regrets
The Last Piece
FOR THE BEST IN PAPERBACKS, LOOK FOR THE
PENGUIN BOOKS QUEER AND LOATHING
David B. Feinberg, a graduate of M.I.T., is the author of the novels
Eighty-Sixed
(Lambda Literary Award for Gay Men’s Fiction and American Library Association Gay/Lesbian Book Award for Fiction) and
Spontaneous Combustion.
Stories, articles, and reviews by him appeared in
The New York Times Book Review, The Advocate, Details, Out-week, Tribe, NYQ, QW, Out, The Body Positive, Gay Community News, Art & Understanding, The James White Review, Diseased Pariah News, Poz,
and both
Men on Men 2: Best New Gay Fiction
and
Men on Men 4.
Mr. Feinberg died in New York City of AIDS-related complications on November 2, 1994; he was thirty-seven.
Praise for
Queer and Loathing
“David Feinberg delineates and populates the vast, maddening, fascinating universe of being HIV-positive in our time better and more fully than virtually every AIDS novel I’ve read. His feline ability to twist and turn into the best possible position when he lands after a fall of twenty-five floors is just one element of what makes the book such a wonderful read. His sense of optimism despite the crushingly depressing nature of the material is strangely joyous. And his pleasure in writing for you and to you, despite the cost to himself, is a delight.”
—Felice Picano,
Lambda Book Report
“Horrifyingly funny, profoundly human, and truthful to the point of murder. It’s not just a good book, it’s an important book. I believe it will endure.”
—Michael Cunningham, author of
Flesh and Blood
“Queer and Loathing
displays the combination of razor-sharp black humor and frustration with moral injustice that worked to great effect in Feinberg’s novels. It is a moving testament to the author’s indomitable spirit.”
—Michael Lowenthal,
Boston Phoenix Literary Supplement
“This wickedly funny, rollercoaster ride of a book is an important addition to the library of anyone concerned with the future of humankind.”
—
In the Life
“Fierce and unblinking, David Feinberg celebrates life by spitting in the eye of the alternative. A reader leaves these essays impressed by a brave voice at once outrageously hilarious and terribly vulnerable.”
—Michael Dorris, author of
A Yellow Raft in Blue Water
“The amazing thing about
Queer and Loathing
is that Feinberg’s bitterness and anger are some of the most life-affirming writing about AIDS we have seen so far.
Queer and Loathing
is a fitting and just memorial for us to remember Feinberg’s courage, insight, and honesty.”
—Michael Bronski,
The Guide
“A shocking and bitter book about AIDS and for that reason an essential counterweight to the sentimental bilge that characterizes so much AIDS writing. AIDS has been pretty well domesticated, safe enough for Hollywood and with its own line of Hallmark cards undoubtedly in the offing.
Queer and Loathing
takes all that back. There’s something in it to offend just about everyone. That’s its triumph.”
—Michael Nava, author of
The Hidden Law
“Outspoken and outrageous,
Queer and Loathing
contains Feinberg’s most insightful, intimate, and controversial writing.
Queer and Loathing
finally proves Feinberg is something more than a genius—he has now become a prophet of dark wit.”
—Jameson Currier, author of
Dancing on the Moon 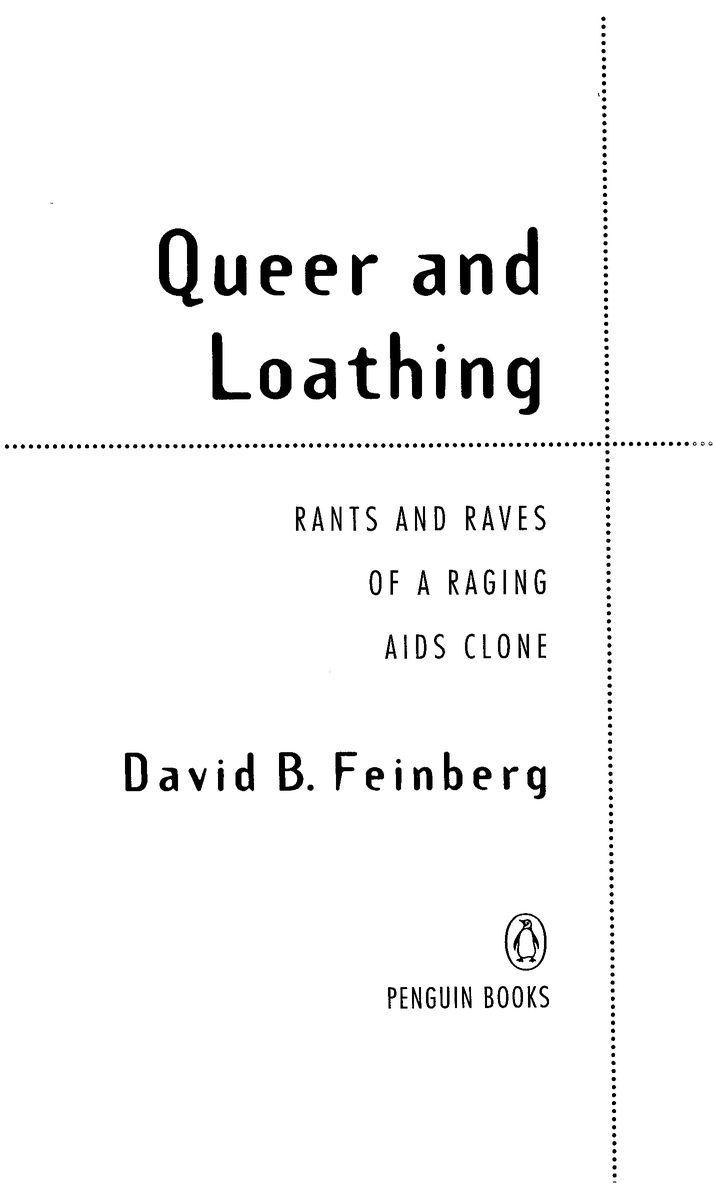 PENGUIN BOOKS
Published by the Penguin Group
Penguin Books USA Inc., 375 Hudson Street, New York, New York 10014, U.S.A.
Penguin Books Ltd, 27 Wrights Lane, London W8 5TZ, England
Penguin Books Australia Ltd, Ringwood, Victoria, Australia
Penguin Books Canada Ltd, 10 Alcorn Avenue, Toronto, Ontario, Canada M4V 3B2
Penguin Books (N.Z.) Ltd, 182-190 Wairau Road, Auckland 10, New Zealand
Penguin Books Ltd, Registered Offices: Harmondsworth, Middlesex, England
First published in the United States of America by Viking Penguin,
a division of Penguin Books USA Inc., 1994
This edition with a preface by Tony Kushner published in Penguin Books 1995
Copyright © the Estate of David B. Feinberg, 1994
Preface copyright © Tony Kushner, 1995
All rights reserved
“Queer and Loathing at the FDA: Revolt of the Perverts” first appeared in Tribe;
“Etiquette for the HIV-Antibody-Positive in Body
Positive;
”Notes from the Front
Lines: Writing about AIDS,“ ”Direct Mail from Hell,“ and ”April Fools“ (as ”Getting
AIDS Absurd“) in
NYQ
; ”Tales from the Front“ and ”The AIDS Clone vs. the New
Clone“ in
Diseased Pariah News;
”Sex Tips for Boys“ and ”Cocktails from Hell“ in
QW
; ”AIDS and Humor“ (as ”Is Humor an Acceptable Way to Deal with AIDS?“)
in
The Advocate;
”100 Ways You Can Fight the AIDS Crisis“ in LIFEbeat concert
fund-raiser program; ”Waiting for the End of the World“ in
Art & Understanding;
”Memorials from Hell“ in
Gay Community News;
”A Season in Hell“ (as ”HIV +
Me“) in
Details;
and ”Death Be Not Proud“ (as ”Um Your Keep“) in
Out.
Queer and loathing: rants and raves of a raging AIDS clone/David B. Feinberg. p. cm.
eISBN : 978-1-101-16171-5
1. AIDS (Disease) 2. HIV infections. 3. Gay Men—United States. I. Title.
RA644.A25F45 1994
362.1’969792—dc20 94-5074

In Memory of Bob Rafsky
Thanks to my friends
Wayne Allen Kawadler,
Jan Carl Park,
and John Palmer Weir, Jr.
Preface
The AIDS epidemic came along and ripped open reality, irreparably, irretrievably. All expectations have been violated, all guarantees of life-as-usual are declared null-and-void. Through this great gaping tear, through this wound, much pain, un-countable losses, and insuperable grief have issued; and also much rage, much courage, much hard-won intelligence, and even some wisdom. David Feinberg would have been an important writer even if we’d all been spared the last ten years. His encounter with what we haven’t been spared—and we haven’t been spared much—has produced work that holds its audience excruciatingly on the razor’s edge between comedy and horror. Feinberg makes you laugh from precisely the place inside of you where laughter really hurts. There’s a terrible, cumulative effect in reading these essays: coruscating, moving, outraged and outrageous, they chronicle the travels and travails of our own Jere miah, or better yet, our Amos, the soul-baring, self-exposing, unsparing moralist—a prophetic voice at any rate, with the added grace note of a blistering sense of humor, without which life in this charnel-house of a century is inconceivable.
Feinberg’s bitter, finely titrated bile, his refusal to despair and his scrupulous recording of despair’s many temptations, his witty observant eye, his compassion and his morality and his take-no-prisoners invective: these are some of the qualities that make him unique, and uniquely important, among the chroniclers of our plague. This is writing that refuses to offer any palliatives, that seeks to intensify what is already unbearable. This is the harshest, and most brave, and most necessary kind of art.
—Tony Kushner
March 1995
Introduction

A Christmas to Bear by Wilder, Carina
God of Destruction by Alyssa Adamson
The Devil Knows You're Dead by Lawrence Block
Death on Beacon Hill by P.B. Ryan
A Family Under the Christmas Tree by Terri Reed
Until We Burn by Courtney Cole
Immortally Theirs [Legends & Myths] (Siren Publishing Ménage Amour) by Scarlet Day
Mary of Carisbrooke by Margaret Campbell Barnes
Wild Ride: Lance and Tammy by Lietha Wards
Ways to Live Forever by Sally Nicholls
Our partner