“What’s going on?” Rolf suddenly appeared in the doorway to the stall, with Jim beside him. Light in the alley told Erik the big door was open again.

“Rolf!” exclaimed Erik. “I’m so glad to see you.” Then he saw Elsa, right behind Jim.

“I got him for you,” she said, catching Erik’s eye. “When that man locked you in the stable, I knew it was a bad thing, so Sara and I found Papa.”

“I don’t know what’s happening,” said Erik. “We came in here and found Olaf tied and gagged, so we let him go, and then we…”

Rolf pulled a handkerchief out of his pocket and handed it to Olaf. “Why did he tie you up?” asked Rolf, “Did he hit you, too?”

“Ja,”
said Olaf, wiping the blood from his face. “When Pete gave Tapper to me, he didn’t really own him. He was stolen, and now he wants him back.”

Erik gasped, but Rolf didn’t look surprised. He looked at Pete, still on the floor. “Is this true?”

Erik felt Pete stiffen beneath him, but he didn’t answer.

“It’s time for the police,” said Rolf. Erik was looking at Jim while Rolf spoke, and saw his face turn white. He turned to leave.

Rolf stepped back, one arm coming out and stopping Jim in his tracks. “Maybe you stay here till it’s all sorted out,
ja?”

Rolf pushed Jim into the stall with the rest of them. “Elsa, you and Sara find one of the Mounted Police and bring them back. We’ll wait here.”

“The boys can get off,” said Rolf, “but leave the ropes till the police come.”

When the Mounted Police constable arrived, Olaf told about being captured by Pete and Jim. Each of the others told their part, except Pete who refused to speak. Jim, watching Pete, said very little.

“There’s another man, too,” said Erik suddenly. “Dark, with a big moustache. He was at our place yesterday, looking for Olaf, along with Jim and Pete.”

Rolf shot him a surprised look.

The policeman listened to Erik’s story, then turned to Olaf. “This horse of yours, the one that Pete gave you, does it have a brand?”

“Y-yes,” said Olaf hesitantly. He looked down at the floor for a moment. “It’s a Bar C.”

“Mmhmm. And do you know who put that brand on the horse?”

“No, sir. Many of the horses had the same brand.”

“Seems a whole herd of Bar C horses were stolen last summer from a ranch in Montana,” said the police officer.

“I learned today that Tapper was stolen,” said Olaf, “but I should have guessed before. This friend of Pete’s used to come to a corral north of town. No one was supposed to talk about him. He covered brands with other brands, mostly the Boxed Q.”

The policeman nodded. “Based on what I’ve heard,” he said to Olaf, “I won’t take you with me, but we’ll continue our inquiries. Don’t go too far away.” He looked at Rolf. “Can I depend on you to make sure he’s here when we need to talk to him?”

“You can,” said Rolf. “I will be responsible for my son.”

Erik let his breath out.

The policeman handcuffed Jim and Pete and took them away. Colin and Sara went home right afterwards. Rolf looked at Erik, Elsa and Olaf. “We’ve spent enough time in this stable. Let’s go.”

Suddenly Erik remembered the race. “Olaf,” he exclaimed. “I almost forgot. When you weren’t around, I brought Tapper to the racetrack so he’d be ready for you. And when you didn’t show up,” he paused and looked at Olaf. He couldn’t read anything in his face. “I…I rode him.”

He dug in his pocket and pulled out the ribbon and the envelope.

Olaf glanced at his outstretched hand. “You won?” he exclaimed. “You rode Tapper in the final race, and you won?”

“So take the money,” said Erik. “It’s yours. If you have to give Tapper back, at least you’ll have some money to buy a new horse.”

“Yeah,” said Erik, “but I only did it for you.” He walked over to Olaf and shoved the envelope and ribbon into his hand, closing his fingers over them. “And every minute I wished you were there.”

“He might not have won if I’d ridden him,” said Olaf, opening the envelope. “I weigh more than you.”

Erik stood by Olaf, watching as he pulled a wad of bills out of the envelope. They counted them together. Ten five-dollar bills.

“It’s possible,” said Rolf slowly, “that the real owner of the horse should have the money.”

“But Olaf cured him,” protested Erik. “If he hadn’t, Tapper would be dead.”

Olaf put the money back in the envelope. “I guess we’ll wait and see,” he said, “but if we don’t have to give it away, it’s yours.”

“Papa, I almost forgot,” exclaimed Elsa. “Aunt Kirsten is making supper for all of us. I saw her when I was looking for the policeman.”

“Then we should head that way,” said Rolf.

“I’m ready, too.” Olaf looked at Rolf for a long moment, then added, “Father.”

Rolf dropped his arm around Olaf’s shoulder. They stepped out of the stall behind Elsa, then Rolf glanced back.

Rolf gestured toward Elsa running out of the stable into the sunshine. “It’s a wide door,” he said. “Wide enough for me
and
my sons.
”

Racing Home
is fiction but, like all historical fiction, it grew out of reality. In this case, I was inspired by the development of the town of Outlook, Saskatchewan. Like Green Valley, Outlook is situated southwest of Hanley on the South Saskatchewan River near a valley of American Elms. The auction of the lots, the swift building of the businesses, the arrival of the train, and the July 1 celebration are all part of Outlook’s history. Most of this I learned from
Milestones and Memories 1900 to 1980,
the community history book of Outlook and surrounding area. I am grateful to the compilers for their diligence in keeping our past from being forgotten. The rest of the story is a product of my imagination, and in no way reflects the real people or events in the history of Outlook, or any other town.

Thank you to Barbara Sapergia for her help in the development of this book. Without her insight, guidance, and encouragement,
Racing Home
would never have made it around the final curve. 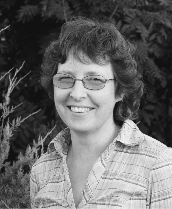 Adele Dueck
has published three other books for children.
Nettie’s Journey, Anywhere but Here
and
The New Calf.
Before turning to writing for children, she wrote for magazines and newspapers, mostly about the humorous side of rural living.

Born in Outlook, Saskatchewan, Adele lived in Drake, Lanigan and Saskatoon before moving to Lucky Lake, where she farms with her family. 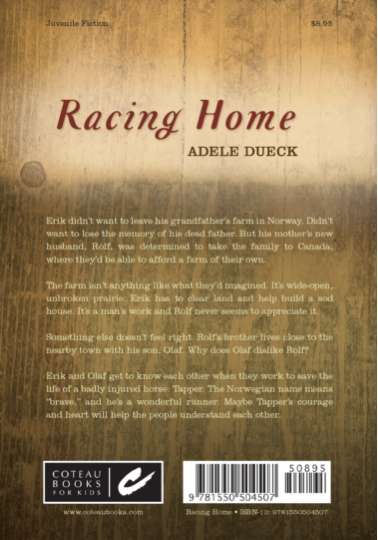 Clair of Earth: Brintex Centurions Book One by Gail Faulkner
Out of the Blackness by Quinn, Carter
Foolish Expectations by Alison Bliss
It Takes Two to Tangle by Theresa Romain
A Cookbook Conspiracy by Carlisle, Kate
Menu for Romance by Kaye Dacus
Betrayal in the Tudor Court by Darcey Bonnette
One Imperfect Christmas by Myra Johnson
Vestido para la muerte by Donna Leon
Your Dimension Or Mine? by Cynthia Kimball
Our partner