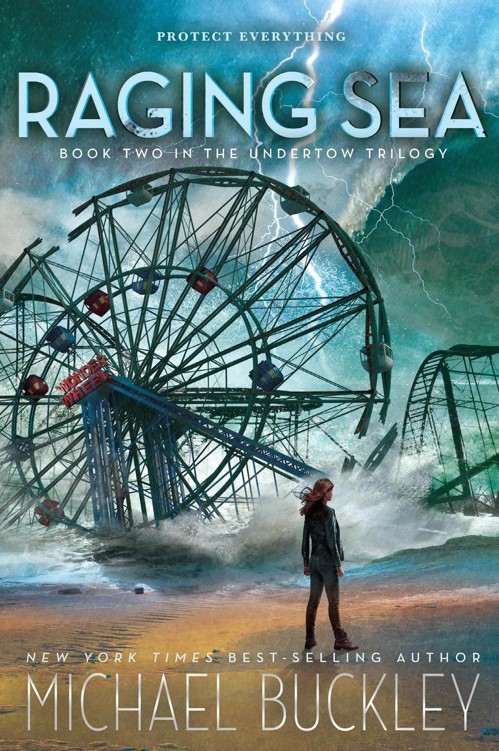 For Sarah Landis, who guides this ship

CONEY ISLAND, NY—LYRIC WALKER, THE SEVENTEEN-YEAR-OLD SO-CALLED CONEY ISLAND TERRORIST, IS STILL AT LARGE AND CONTINUES TO ELUDE FEDERAL MARSHALS AND LOCAL POLICE DEPARTMENTS. THE FBI ONCE AGAIN HAS CALLED FOR THE PUBLIC’S ASSISTANCE IN TRACKING WALKER DOWN, DOUBLING ITS REWARD TO FIVE MILLION DOLLARS FOR ANY INFORMATION LEADING TO HER CAPTURE AND ARREST. TODAY THE AGENCY REASSERTED ITS CLAIM THAT IT IS EAGERLY PURSUING EVERY LEAD.

“[Walker] is allegedly tied to the deaths of nearly fifteen thousand people, as well as the disappearance of another four thousand. Bringing her to justice is the agency’s top priority,” FBI director David Winslow explained. He said the search has been hampered by the fact that the department is “working in a vacuum.” “We know she’s out there, but we need everyone’s help to find her,” Winslow stated.

Winslow pointed to the FBI’s twenty-four-hour tip line and website. He also stated that every police precinct in the United States is on heightened alert for Walker because of her alleged involvement in the destruction of the Coney Island neighborhood of Brooklyn, New York. Two weeks ago a massive tidal wave slammed into the community, causing countless deaths and billions of dollars in property damage, shortly after local police attempted to arrest Walker and her parents, Leonard and Summer Walker, on suspicion of espionage as Alpha terrorists. Credible evidence suggests that the wave was not an act of nature but the result of a weapon created by Alpha scientists.

A high-ranking official in the State Department who was not authorized to speak on behalf of the president complained that the failure to locate Ms. Walker is making law enforcement officials look incompetent.

“This girl has no family outside New York City. She has no credit cards and, as far as we can tell, no cash. Yet she’s somehow managing to stay off our radar,” he said. “We’ve gotten tips from New York all the way to Texas, but the police can’t make an arrest.”

Some reports allege Walker is traveling with a friend named Rebecca Conrad and an Alpha female who goes by the name Arcade and is rumored to be a member of the Triton clan.

“How hard is it to find three teenage girls, one of whom happens to be from a completely different species?” the source continued. “I won’t lie. This is frustrating. I know the American public is frustrated.” The source added that the young women “are making us look like fools.”

“We’re going through video from banks, ATMs, convenience stores, libraries, anywhere there’s a camera.” Chief Hand says it’s “possible, though unlikely” that Walker remains here in New York. “We believe she is headed to the Southwest and has eluded the roadblocks that many states have constructed to keep out East Coast refugees. We’ve been working hand in hand with departments in New Jersey, Connecticut and Pennsylvania to find her. People need to be patient. We’ll catch her. It’s impossible to hide in modern America.”

S
HE SITS AMONG THE CACTUS AND STONES AS THE RISING
Texas sun ignites the edges of her silhouette. Her eyes are closed, her legs crossed, as if she is meditating. But the only higher plane she’s trying to reach involves killing and maiming her enemies. She barks at her fish god, the one she calls the Great Abyss, repeating an endless diatribe that deals with ripping out entrails, and severing heads from necks. This is how Arcade prays, and it can take hours. I was out here waiting when the temperature dropped and my bones froze stiff. Now the sun is rising and the air is broiling and I have run out of patience. We’re supposed to be training. We’re supposed to be getting ready for Tempest, but nothing happens until the Great Abyss gets an earful.

I kick a stone, a passive-aggressive reminder to her that I am still here.

“Come on!” I growl, giving up on the passive.

She opens her sharp blue eyes and stares at me. They form narrow slits that I’m sure would shoot lasers if they could. I have broken her unspoken rule—no talking when she’s doing her fiery-religion thing.

“The Great Abyss is owed praise for his favors,” she says. “He is the giver and the taker, the creator of all things, the beginning and the end of this world, and it would be wise for you to kneel and prostrate yourself before him.”

“I don’t believe in the Great Abyss.”

“The Great Abyss does not need you to believe in him. He is, whether you accept his existence or not. Dismiss him at your own peril.”

“Thanks for the warning.”

“Do humans not have a god of their own you could speak to?”

“We’ve got hundreds of them, but the one I picked isn’t much of a talker,” I say as I raise my hand into the sky. My palm is encased in a thick metal glove that wraps around my wrist and exposes the fingers. With just a thought, it explodes with power and energy, turning my whole arm into a supernova of bright blue light. I smile. It wasn’t so long ago that I was terrified of this thing, but now I’m digging it—a lot. Wearing it makes me feel intimidating, like I’m an Amazonian warrior. I feel dangerous, gigantic, and five hundred feet tall. “We’re wasting time! If I don’t break something, I’m going to go crazy.”

“You want to break something, little minnow? Then break me,” Arcade says as she climbs to her feet. Once there, she ignites her own glove, and without warning, the ground heaves, first left, then right, bucking me like I’m a pesky flea it wants to shake off its hide. A crevice opens beneath me, and mud, silt, and water belch through it, rocketing high into the sky and knocking me to the ground.

I should have seen that coming.

I bear down on my thoughts, turning Arcade’s geyser into a baseball bat as big as a man. I fill it with sand and stones, and then I swing for the fences, right into her rib cage. The impact knocks her off her feet and sends her flailing across the dusty field. She lands with a bone-crunching thud that would kill a normal person. Arcade is made of tougher stuff. She is a Triton, a warrior from an undersea empire flung to the surface by war and horror. Before she set foot on land, she lived her whole life in an inhospitable environment that made her stronger and faster and meaner. My attack was no more than a swat in a pillow fight. She runs toward me, roaring in my ears, with her glove leaving a comet’s trail behind her. It’s her turn to clobber me.

Two weeks ago, I would never have stood my ground like I do now. When Arcade agreed to train me to fight, I was still clinging to the quiet little girl I had been for so long. When she demanded that I think of myself as a weapon, I just couldn’t do it, even though I knew it was confidence and passion that fueled the crazy weapon on my hand. Don’t ask me how it works. All I know is the more badass I feel, the more damage I can do. But getting over years of invisibility wasn’t easy, and my cowardice held me back. Now that wall I built around me is falling down. Now I’m feeling like the wild thing I was always meant to be. Which is convenient, because now we’re in Texas, where Tempest is, where they are keeping my family. Anyone who gets in my way has a big frickin’ problem on their hands. Even Arcade.

A huge watery fist materializes before me and catches me in the face. I flail backwards, end over end, like a pickup truck just hit me in the mouth. I crash onto my back, hard. Pain stampedes through my hips, neck, and chin. I see stars, and I’m suddenly not sure where I am.

Arcade stands over me, impatient and unsympathetic.

“Get up!” she demands. “Do you think the soldiers at Tempest will give you a chance to recover? They will shoot you where you lie, half-breed.”

I hate when she calls me that word, which is exactly why she does it. She knows it sets me off. She’s asking for it, so I wrap water around a nearby boulder, one that would take ten men to heft an inch, and use the liquid to wrench it free from the soil. It hovers between the teacher and the student. I want Arcade to see what I’ve learned, let her think I will fling it at her if she doesn’t stop insulting me, but her eyes are full of smiles. She’s calling my bluff.

Furious, I send it sailing in her direction. It’s too fast to dodge, and it slams into her with all the power of a subway train. Her body is flung fifty feet away, narrowly missing a patch of wild cacti when she lands. I’m sure I’ve killed her this time. I scamper to my feet in a panic and rush to her side.

“You are the only person in the world who bleeds when she attacks someone else,” she says.

I reach up and touch my nose. It’s wet, and when I look at my fingers, they are smeared in red. I’m not sure why this keeps happening. It seems if I go overboard with the glove, it breaks something inside my head. It’s probably killing me.

“Maybe I need a break,” I confess.

“A break?” she scoffs. “An Alpha does not need a break. Your mother’s blood runs through you, Lyric Walker. Can’t you hear its call for war?”

“My mother was a yoga teacher!”

“Your mother is a Daughter of Sirena. She fought off a pack of barracudas when she could barely lift her own head. Her father was Lan, hero of the Trill campaigns. There are songs about him that will be sung for generations. Your grandmother Shar was also known throughout the hunting grounds for her bloodthirstiness. She once defeated an Orlandi chieftain in hand-to-hand combat, all with a broken arm.”

“Trill? Orlandi? Are they Alpha clans?”

She shakes her head. “There are other empires, Lyric Walker. Did your mother teach you nothing?”

“I didn’t want to know,” I confess. When I found out my mother wasn’t a human being, I avoided everything about her past. I didn’t want Summer Walker the Underwater Barbarian. I wanted Summer Walker wearer of cutoff jean shorts and flip-flops.

“There are many things in the sea, Lyric Walker. Be thankful that you have only seen a small number of them.”

I shudder. I’ve seen enough to give me nightmares for the rest of my life.

Being Chased by Bentley, Harper
Give Me Everything You Have: On Being Stalked by Lasdun, James
The Chosen Heir (The Bolles Dynasty Book 3) by Warren, Susie
Organized to Death by Jan Christensen
A Train in Winter by Caroline Moorehead
Fury Calls by Caridad Pineiro
Dangerous Lover by Maggie Shayne
The Hunchback Assignments by Arthur Slade
Damaged Love (Bound Series Book 2) by Layla Stevens
The Reluctant Husband by Madeleine Conway
Our partner