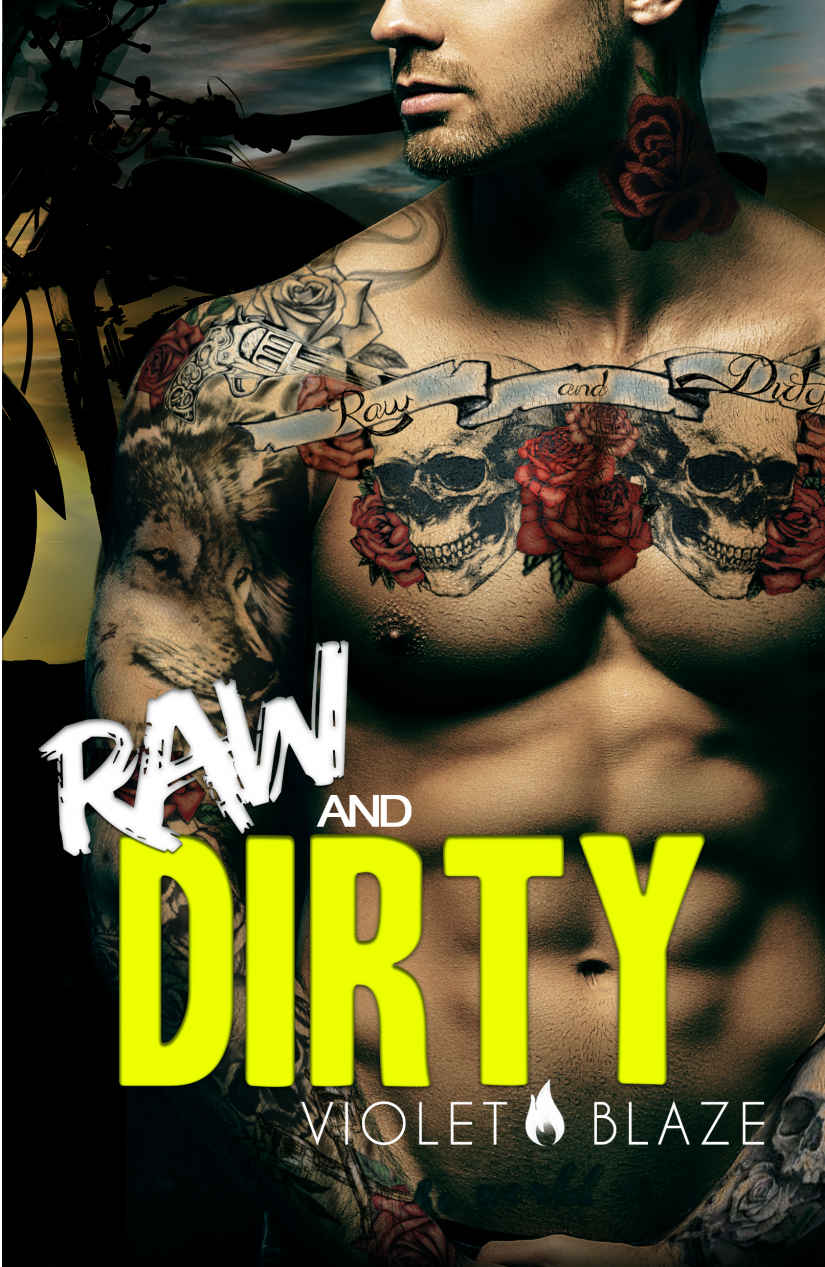 I can hardly breathe. Hell, I'm not sure that I even
want
to. Royal's kiss … this is the kind of kiss you only get once in a lifetime—it's a promise of fire but also a promise of pain. He tastes like risk and rawness and everything I've ever wanted but never had.

Our kiss is brutal and pummeling and completely unexpected. 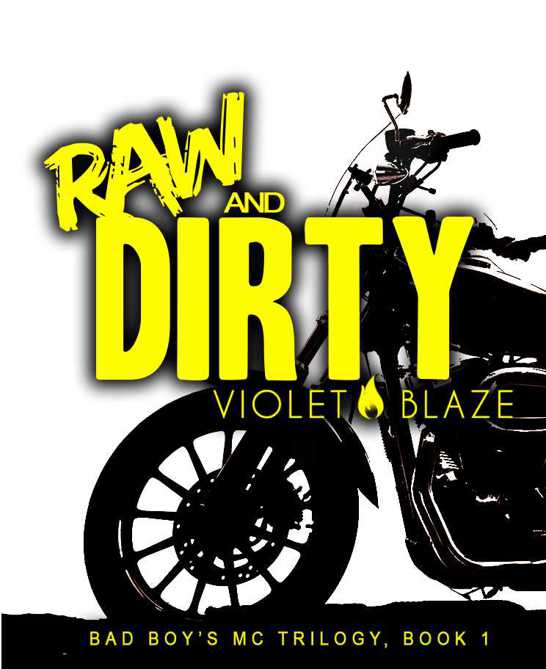 The characters and events portrayed in this book are fictitious. Any similarity to real persons, living or dead, businesses, or locales is coincidental and is not intended by the author.

this book is dedicated to anyone that ever dared to wonder. 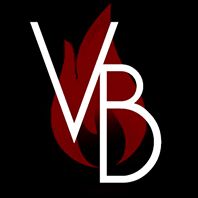 Hey there! This is Violet Blaze blowing a kiss your way and thanking you for picking up Lyric and Royal's story. It has an interesting history, too. Written a while back, Raw and Dirty sat finished in my writing archives for quite some time until some friends got curious and decided to look through my unpublished works. They fell in love with the story and the characters which in turn made me fall in love with them all over again. I really love the dynamic between these two and hope that if you like it as much as I do that you'll leave me a review and let me know. ;) I wish you luck on your reading journey and can't wait to hear what you think. As you're reading, Tweet and Instagram your favorite passages to me
@IAmVioletBlaze
#rawanddirty. I can also answer questions, hear compliments or complaints, or just chat!

What a broken, beautiful man.

That's my first thought when I step onto the Alpha Wolves' compound, how
beautiful
their president is. Of course, if he knew what I was thinking I doubt he'd be pleased. Beautiful is for flowers or skirts or landscapes, not for men like Royal McBride. If I have to pick an adjective, I think
dirty
suits him a little better. Dirty. And brutal. And raw.

It crosses my mind that I'm not the first person to think that. Toni Gladstone, the woman who held my position not three months ago, she said that same thing out loud three days before she quit, announced it to the entire office.

But he got to her anyway—in more ways than one if her flushed face and mussy hair were any indication of what happened during their first meeting.
Deputy Mayor of Operations and Government Affairs.
Poor Toni shed her title along with her skirt after only half a week of dealing with Royal and his Wolves.

I won't make the same mistake.

I straighten my own skirt—some bland, gray wool blend that I inherited from Toni along with her title—and make sure my hair is still in place, tucked back in an austere bun that's as unflattering as it is uncomfortable. But all of this blandness, this is my uniform against the world. It's a way to survive when nothing else seems to be going right. Blend in, disappear, assimilate.

I take a deep breath and put a smile on my face.

It's hard to keep it there with my eyes glued to Royal's wide, muscular back. I haven't even been introduced to the man, and I'm already falling apart. Sweat trickles down my spine and soaks into the cotton fabric of my white button-down while I try not to admire the curve of dark denim that cups the President's too perfect ass.
Oh my God, I'm already floundering here.

I take a deep breath and start forward, my heels loud against the pavement. I parked right in front of the clubhouse, so I know the whole MC is aware that I'm here. Still … nobody's acknowledging me. It's a scare tactic, I'm sure, but these men have a lot to learn if they think I'll scare easy. I might be five two and as average as you'll ever see, but I'm tough.

“Mr. McBride?” I ask, approaching the cluster of men standing on the wet pavement, gray skies above and a row of gleaming motorcycles on our right.

I pause about three feet from him—it's as close as I ever want to get. Even from here I can feel the heat rolling off him in waves, his strength, his charisma. It's frighteningly magnetic. I guess it's not just his six foot four frame or his hard muscles that keep him in control here.

“Mr. McBride?” I ask again, raising my voice a notch. I can keep quiet when I need to, but a woman in politics also has to know how to speak up or she'll never be heard. A few of the guys glance my way, assessing, and then quickly flick their gazes back to their president.

I feel my lips purse. It's not like I showed up here on a surprise visit. In fact, it was Royal himself who approached the mayor's office in an attempt to iron things out between the local government and the MC. I scheduled this meeting with Royal's secretary not four days ago. The bastard knew I was coming.

Raindrops start to fall, fat and heavy, splattering against the pavement and the metal roofs on the warehouses on either side of the long drive. The wetness slides across Royal's rock hard muscles, making the colors in his tattoos seem brighter, moistening the eyes of the wolves crouching over his biceps until they look real, like they're staring right at me.

I refocus my attention to his head of dark hair, my gaze directed up, up, up. The bastard's too tall for his own good. Still, I'm pretty sure I've got myself under control. It doesn't matter how handsome this guy is or how nice his body looks in that tight leather vest.

I take a deep breath, meeting the eyes of the wolf's head patch on his back, framed on the top and bottom with another pair of patches.
Alpha Wolves
on the top and
Trinidad, CA
on the bottom. An
MC
and a
1%
patch sit on either side. Intimidating, much?

“Royal McBride.” I state his name with every ounce of authority I have—and it works. At the very least, it gets his attention.

“Who the fuck …” Royal begins, turning slightly to glare at me, locking a pair of dark brown eyes on my face. His brows raise and the corner of his mouth twitches. Me, I come completely unhinged, heat flooding my body, filling up all the places I so very suddenly want this man to touch.

Royal looks me up and down once, assessing, his gaze giving absolutely nothing away.

“Well, I'll be damned,” he says, his voice holding the edge of an accent I can't quite place. He's trying so hard to hide it, but … “Is this pint-size little package from the mayor's office?” Royal tilts his head and lets his lips twist into a smile. I can already feel the flirtatious waves rolling off of him, the charm being turned full tilt onto my frowning face. I don't take it personally though; Royal isn't flirting with
me
, not really. This is a man who's used to getting his way with a smile and a wink, somebody who thinks that anyone without a penis wants him.

Hell, it's probably true, but I won't let
him
see that.

“Royal McBride, my name is Lyric Rentz, and I'm the Deputy Mayor of Government Operations and Affairs for the city of Trinidad.” I force my mouth into a smile and decide it's probably best to ignore the whole
pint-size
comment from the Alpha Wolves President. I extend my hand and pretend that I'm not studying that handsome face, the rugged cut of that jaw, the ruthless, wry humor that surrounds the man's impressive form.

Royal gives me another once-over, like he's not quite sure what to make of me. This time, I feel his gaze diving deeper, trying to get under my skin and understand what I'm all about, what makes me tick. I wouldn't be surprised to learn that Mr. McBride reads minds.

“Well, well, well,” he says, his voice dropping a little lower as he goes in for yet another head to toe look. This time around, something in his expression shifts and I feel a little chill travel up my spine, dragging goose bumps down my arms. “Lyric …
Rentz,
” he says, my first name a verbal caress passing between his lips. My last name though … he says that like a curse. I know what he's thinking: Philip Rentz … Lyric Rentz. I have the same last name as the mayor.

Royal glances down at my fingers, searching, I think, for a ring. When he doesn't find it, he comes to some other conclusion and reaches up to take my still extended hand.

When our fingers slide together … oh God. His hand is rough and calloused, grazing the smooth skin of my own with an almost tangible spark that makes me jerk back like I've been burned. The guys around Royal chuckle and I jump; I almost forgot they were there.

“You're the mayor's … sister?” Royal asks casually, lifting his chin and tucking his fingers into the front pockets on his jeans.

“Daughter,” I correct, hating that that's the truth, knowing what people think when I say it.
She got that job
because
her dad's the mayor.
If they only knew … I got the job in
spite
of that. “Youngest of three.”

Death Will Extend Your Vacation by Elizabeth Zelvin
The Silver Dragon by Jean S. MacLeod
Lords of Finance: 1929, the Great Depression, and the Bankers Who Broke the World by Liaquat Ahamed
His by Brenda Rothert
A Man Lies Dreaming by Tidhar, Lavie
Red Flags by C.C. Brown
And De Fun Don't Done by Robert G. Barrett
A Thousand Ways to Please a Husband With Bettina's Best Recipes by Louise Bennett Weaver, Helen Cowles Lecron, Maggie Mack
The New Adventures of Ellery Queen by Ellery Queen
Renewal 9 - Delay Tactics by Jf Perkins
Our partner