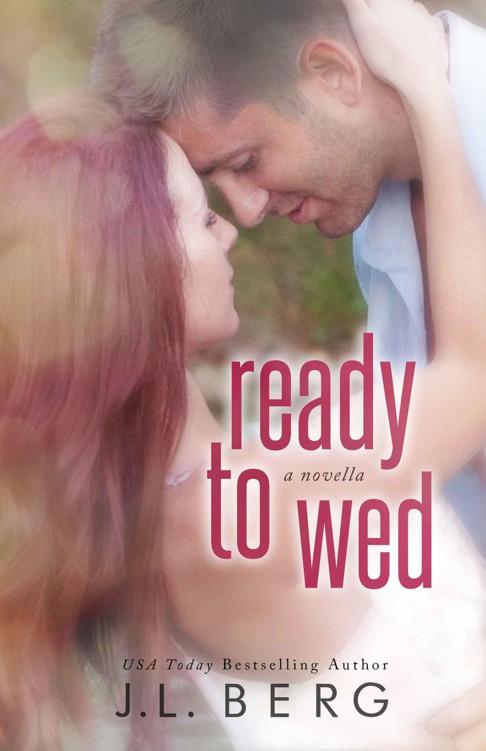 Find other titles by J.L. Berg on
Amazon
.

Playlist for Ready to Wed

“Where are my keys?” I shouted, running around the kitchen like a crazy person in search of my bright pink monogrammed key ring. It really shouldn’t be that hard to miss.

“Why do you need keys?” asked Logan, my smug looking fiancé, as he casually leaned against the door frame.

“What do you mean? Aren’t we leaving? Of course I need keys. Why are you just standing there? Start looking!” I commanded.

He didn’t budge. He just continued his casual lean and grinned, looking cocky and gorgeous, before pulling his own set of keys out of his pocket.

“I don’t really think we need both set of keys while we’re away…do you?” he asked.

I just stared at him. Why was I so frantic and nervous? I’d spent the last twenty minutes looking for keys that I didn’t need. I knew that. Logan was driving to the airport, so why did I need keys? Before the keys, I’d scrubbed down the entire kitchen from top to bottom after doing the same to all three bathrooms. Why? I have no freaking clue. Did I want the house to look nice just in case someone came to rob us? Because nothing says, “Welcome to our house, please take our television!” like clean bathrooms.

He left his post at the entryway and walked towards me, wrapping his arms around my waist. He pulled me closer to him and I sighed, settling into the warmth of his body instantly.

“Are you okay Clare? You’ve been wired ever since we started planning this a week ago. You know, we don’t have to get married this weekend. We can postpone it. Like I’ve always said, I’ll wait for you.”

“No. I want to get married this weekend. It’s just…there’s a lot to do, and I feel like I’m going to forget something important,” I answered.

“There are two things you need at that wedding,” he said.

“Mmmhmm….me and a ring. The rest is just for show.”

“Don’t forget me!” Maddie said, barreling into the kitchen from the hallway. My overly excited five year old couldn’t wait to hop on that plane and go to “the beach”. She didn’t even care what beach, only that we were going and she got to play in the sand. The fact that Logan and I were getting married was the icing on the cake. God, I was lucky. I gave Logan a once over, checking for signs of weakness, symptoms that he might be tired or sick.

“You got all of your new meds?” I asked, looking at Logan with concern.

Logan had just been diagnosed with Hodgkin’s disease, and in an effort to not put our lives on hold, we decided to get married as soon as possible. His doctors were optimistic, saying that since it was caught early, his likelihood of recovery was high, but I still worried. My first husband, Maddie’s father, had died of cancer. I still remember every single day, every minute watching helplessly as he deteriorated in front of me. I had been useless, completely useless, and unable to stop it.

“I’m sure. It’s only a couple weeks. The oncologist said it would be okay to delay treatment for two weeks. I want to enjoy our wedding and time away with you. I’ll start the minute we get home. I promise.”

I nodded, giving him a hint of a smile before turning to Maddie.

“Are you ready?” I asked brightly.

We loaded the car and headed to the airport for our two week long stay in St. Thomas. It had originally been our vacation for the summer…the first trip Logan and I would take together. He was my first ray of hope since Ethan died. He showed me love can exist after death, even when it seems impossible. When he proposed, we turned our vacation into an impromptu wedding, renting out a small resort and inviting our family and few friends. Logan still wouldn’t tell me how much everything cost. He just smiled and started whistling every time I asked. I had a feeling it was a crap load. I knew he could afford it, but it didn’t make me feel less guilty.

“When do Leah and Garrett fly in?” Logan asked.

Leah was my best friend and Maid of Honor. She was flying in with my brother, who was a groomsman for Logan. Leah and Garrett loved each other like brother and sister and always tried to hang out whenever they could. My brother’s crazy work schedule didn’t offer him much time off, so they decided to book their tickets together to give them some time to catch up.

“Um, I think they come in a few hours after us. Leah had to work late last night, so she wanted to take a later flight. Garrett is supposed to be picking her up around noon.”

“Do they…I mean, have Garrett and Leah ever…?” he asked, skirting around the question.

He lifted a hand from the steering wheel in mock defense, “Just asking…didn’t want to make assumptions. I’ve only met your brother a handful of times. I don’t think I’ve ever met anyone who works more than he does…and I’m a doctor.”

“I know. My brother, the workaholic. Who knew he’d move back home from college and we’d still never see him,” I said with a shrug.

After checking our luggage, including the very precious garment bag that contained my wedding dress, we went through security. This was always a fun task with a child, and we of course got several glaring looks from the speedy businessmen. Once securely checked, we proceeded to our gate.

“I can’t believe they wouldn’t let me carry on my garment bag!” I said with a huff.

“Well, it was quite large,” Logan said, pointing to our gate and taking a seat in our designated area. Maddie immediately reached into the backpack of activities we’d packed, pulled out a book and began reading…or at least pretended. Either way she was being quiet, and I thanked the heavens for the few minutes of peace. I loved her more than I ever thought possible, but man…she could talk. I guess I shouldn’t be surprised considering who gave birth to her. I’m not known for being quiet, especially when I’m nervous. I babble a lot.

“It wasn’t that large! Okay…it was, but crap. They let that dude in front of us bring his guitar,” I pouted.

“Hey,” Logan said, pulling my chin level so our eyes were locked. “It will be fine. Nothing could ruin this week, okay? By the end of this weekend, you will be officially and forever mine. I don’t care if you’re in a burlap sack, Clare. The only thing that matters is that you say those vows and bind yourself to me for eternity, got it?”

“Good.” He gave me a quick wink before pulling Maddie on his lap. She’d only learned a few words so far, so he assisted by helping her sound out the rest. I just watched, loving the perfect picture the two of them made. I would have never guessed, walking into that emergency room several months ago when Maddie had fallen and given herself a concussion, that I would wind up here. Logan not only healed Maddie that day, he’s been healing all of us ever since.

About thirty minutes later the announcement came that our flight was boarding, so we packed up Maddie’s things and headed for the gate to check in. With Maddie bouncing up and down in his arms, Logan ran his free hand down my cheek, his eyes suddenly filled with emotion.

“Ready to go get married?” he asked.

Smiling, he grabbed my hand and we walked towards our future.

A family. My family, finally.

It was something I’d always wanted, and here it was, all because I opened the right exam room door and found my future on the other side.

After a quick changeover in Charlotte, we were flying over water and headed for St. Thomas. Clare and Maddie had fallen asleep, both leaning their heads against my chest as I tried to read. I puffed out a small laugh and gave up, my awkward attempts at holding my e-reader with the two of them wedged against me proved fruitless. I tucked it in the front pocket of the seat in front of me, and rested my head against the seat, looking down at my two red-headed angels.

Maddie looked like a cherub plucked right out of heaven. Her strawberry blonde curls cascaded down her back in a fiery display, mimicking her mother’s. Clare’s red hair was deeper, more intense; closer to auburn but it still having that crimson glow to it that matched her personality. Sweet with just a touch of fire— that was my Clare. I never knew what I was going to get from one moment to the next, and that’s what I loved about her. She kept me on my toes, loved me for who I was, and never let me be anything but myself.