There’s more than one way to situate yourselves during the hands-on action, and each has its charms. Here are some ideas on how to get comfortable:

Make Sure He’s Not Holding His Breath

As the action heats up, many men tend to tense their bodies and hold their breath—a common impulse if they’re trying to concentrate. But the fact is, muscles and nerves need oxygen to function properly. The more he breathes, the more he can feel, so remind him to inhale and exhale deeply to keep the hot-blooded fun flowing.

Admit it: It’s pretty easy to get a guy to reach Kingdom Come, whether that’s via your hand, mouth, vagina, armpit, or otherwise. And sure, when you’re tired or time is tight it’s tempting to move
things right along because you can (and you won’t hear him complaining). We’re not saying these quickie climaxes aren’t nice. But given that the strength of his sexual release is directly correlated to how wound up you get him beforehand, why settle for a molehill when you could shoot for Mount Everest peaks? To build his pleasure, try slowing down the pace of your heavy petting. Or if he’s close to the edge, keep him teetering on the brink with a little teasing. It’s definitely time well spent.

Is He About to Blow? Tips to Prolong the Fun

You’re probably familiar with the Point of No Return—that moment when a guy is mere milliseconds away from experiencing a small piece of heaven on earth. While its very name suggests there’s no going back at this juncture, it actually
is
possible to slow him down if you want to draw things out. If he makes it clear in so many words or groans that he’s near Nirvana, wrap your thumb and forefinger in a ring around the base of his testicles and gently pull them away from his body. The reason this works is that prior to ejaculation, his balls hunch closer to the body to prepare for blastoff. By pulling them away from their locked-and-loaded position, you can keep his barrage at bay almost indefinitely. Don’t worry, it won’t hurt; it merely delays the big launch until you both decide the time is right.

Yes! Yes! Yes! How to Make Your Man Multiorgasmic

You’re probably aware that women can experience multiple orgasms, but here’s a newsflash you might have missed: Men can be multiorgasmic, too. With a little training, guys can hit two, three, or more high notes without taking long time-outs in between. If you’re dubious, allow us to explain the science behind this bold claim. 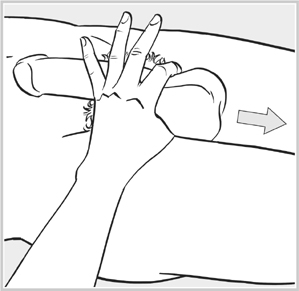 HOW TO DELAY EJACULATION

It’s often thought that in men orgasm (the pleasurable contraction of muscles) and ejaculation (the release of semen) are all wrapped up in one big pleasure package, but they’re actually two distinct physiological phenomena that need not occur simultaneously. Train your guy how to separate one from the other, and he can have orgasms galore without setting loose his little swimmers, which is what typically pulls the plug on his hard-on and puts an end to the festivities. First, he needs to learn how to contract his pubococcygeal (or PC) muscle, which lines the pelvic cavity and can be located by stopping
the flow of urine. Clenching this muscle can also halt the flow of seminal fluid from the body. Before he can do this he may need to build up his strength first by flexing these muscles twenty or more times per day for a week on his own. (If you’re familiar with Kegel exercises, this is the male equivalent.)

Once you two are ready to give multiple Os a go together, start off by stimulating him as usual. The moment he feels that first flutter of orgasmic contractions, you should stop all stimulation while he squeezes his PC muscle as hard as he can. In doing so, he can prevent ejaculation while those orgasmic contractions keep flowing. He can repeat this pleasurable process as many times as he pleases, although eventually he’ll probably want to top things off by busting loose with an orgasm/ejaculation finale.

MANUAL MOVES THAT WILL
ROCK HIS WORLD

F
inally, here’s where you learn how to use your hands on his Big Kahuna in ways that will make him gasp, “What was
that
? Can you do it again? Don’t stop!” and other appreciative comments about the nature of your sexual genius. Men may have active imaginations about all the knee-buckling sensations their genitals could experience, but even so, your hands will be way ahead of them. The techniques you’ll learn in this chapter make use of your palms, fingers, knuckles, and nails in surprising and creative combos. He won’t know what hit him when you break out these moves.

Probably the best part is, unlike dabbling in backbreaking sex positions, expensive props, or complicated role-playing scenarios, you’ll find that the techniques in this chapter all share one refreshingly common denominator: They’re
easy.
Even our most complex maneuvers can be mastered in a few minutes, which can be a huge
relief for couples who don’t have the time to put on a big bells-and-whistles production in bed. Manual techniques are also highly compatible with other sexual activities. In
chapter 10
we’ll show you how to incorporate your handiwork into intercourse, oral sex, and other areas of your love life that could use some help. For now, though, let’s let your hands take center stage and learn a few tricks that will amaze and astound.

Fine when he is erect or soft, with or without lubrication

This technique isn’t a caress but rather a series of squeezes that will fire up nerves
underneath
the skin and boost circulation (and better blood flow = bigger erection). To start out, form a ring around the base of his penis with your thumb and middle finger. Tighten the ring for about one second, then release (try to exert most of the pressure on the sides of the penis versus front and back, since the front and back contain veins that might be painful if pinched too hard). Next move your “ring” up half an inch and squeeze again, continuing up the shaft and finishing off with one final squeeze on the head.

In addition to stimulating deeper tissue and getting the blood pumping, this technique also hits a series of acupressure points on the penis that are linked to other areas of the body. The head of the penis, or glans, for example, is connected to the pineal gland. The top third of the penis correlates to the spleen, mouth, stomach, and pancreas; the middle third to the liver, eyes, and small intestine; the bottom third near the base connects to the large intestines, kidney, and bladder. By squeezing these spots, you get energy spreading to all sorts of places. All in all, Cock Shiatsu is a powerful head-to-toe pick-me-up and a great way to launch a lusty encounter.

Best when he is soft, without lubrication

Hold the head of the penis firmly in one hand and slowly pull—first down toward his feet, then to the sides, then up, then all around in a 360-degree circle, taking a full five seconds for each movement. While generally one doesn’t think to stretch the penis like one would their hamstrings before running a 5K, the truth is, this exercise provides a unique—and highly pleasurable—sensation. Trust us, it won’t hurt; penises live to lengthen. Just be sure to check in with your partner about how far is
too
far—although most times we hear men in our classes say, “Keep going!” Not only does this technique feel good; it has long-term benefits: You’ll make his erections bigger, longer, and stronger. Permanently. We’re not saying size is everything, but we think you’ll find that most guys sure wouldn’t complain if their minnow were a bit more like Moby Dick.

Best when he is soft, without lubrication

Wrap your hand around the head of the penis and hold the penis straight out so that it is at a 90-degree angle to his body. Then move his penis in small circles like you were testing out the joystick on a video game. Start with five slow circles, then five fast, then (here’s the clincher) give it a shake. That’s right, shake that shaft as if you were playing the maracas in a mariachi band. Don’t worry, his penis can handle it. Wiggling stimulates tissue in an entirely new way; aside from feeling good, it exudes tons of personality. It’s playful and a perfect way to show him who’s
really
in charge. 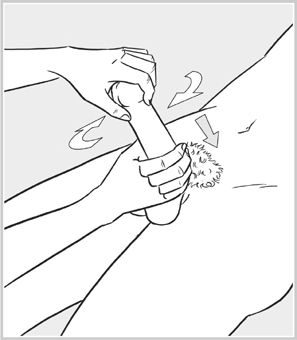 Best when he is erect, with lubrication

If you remember your anatomy lesson from
chapter 5
, you’ll recall that the head of the penis, or glans, contains many more nerves than does the shaft. As a result it deserves some VIP treatment (and FYI, that
P
stands for
penis).
To deliver in spades, hold the base of the shaft with one hand and pull down. This will tug the skin at the head taut, which serves to further increase sensitivity by fully exposing those nerve endings.

Now that he’s primed to feel even the subtlest sensations, take your other hand (lubricated is best) and loosely encase the head of his penis so that your fingers form a claw around it and your fingertips are encircling the corona. Twist your wrist in half circles, lightly stroking the head of his penis, making a motion as if you were juicing an orange.

Best when he is erect, with lubrication

As with The Juicer, this technique lavishes attention on the extrasensitive head of the penis. Only this time, rather than teasing him into a frenzy, you’re going to lay it on thick and send him into sensory overload. Again, hold the base of the penis and pull down so the skin is taut. With the other hand (which should be well lubed), make a fist with a small opening … then slowly push the head of the penis through while squeezing tightly.

In case you haven’t guessed, this technique mimics that extremely satisfying moment he enters other orifices in your body (such as the vagina or anus). And since your hand can adjust the tightness, the sensations you deliver can be
very
intense (just remember, the tighter your grip, the slower you should go to avoid overwhelming his nerve endings). Once you have inched your way past the head, continue sliding down the shaft and then move back on up. Then repeat to his heart’s (or, rather, his hard-on’s) content.