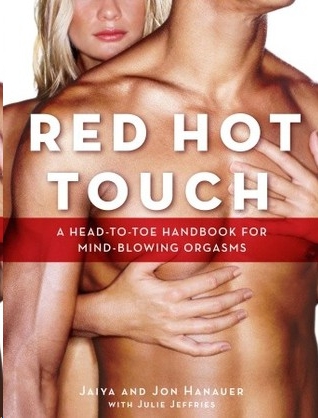 The human hand is so beautifully formed, its actions are so powerful, so free and yet so delicate that there is no thought of its complexity as an instrument; we use it as we draw our breath, unconsciously.

—SIR CHARLES BELL,
The Hand, Its Mechanism and

Introduction: The Future Is in Your Hands

2    Setting the Scene for Mind-Blowing Sex

3    A Sensual Massage to Remember

6    Manual Moves That Will Rock His World

8    Manual Moves That Will Rock Her World

10    Putting It All Together: How Your Hands Can Make Intercourse, Oral Sex, and Every In-bed Activity Hotter Than Ever

INTRODUCTION
THE FUTURE IS IN YOUR HANDS

I
f you were asked which part of your body was your most powerful asset in bed, how would you answer—after you stopped blushing, of course? Maybe you’d admit that your tongue knows some pretty tantalizing tricks, or deem your derrière as your most attention-getting gift. Who knows, maybe your beautifully groomed, extraordinarily endowed privates never fail to impress. Whatever your response, we’ll bet we know of one area of your anatomy that wouldn’t immediately cross your mind: your hands. Sure, hands may be essential for undoing buttons, unzipping zippers, and occasionally squeezing the goods, but beyond that, what do your hands truly have to offer?

Well, allow us to fill you in.

Hands are the most nimble instruments on the human body. They can do all sorts of amazing things, from playing a soul-stirring piano concerto to performing open-heart surgery. Without hands, the Sistine
Chapel would have never been painted. The statue of David? Just a ho-hum hunk of marble. And you could forget about cheering on Roger Clemens as he strikes out another batter with his incredible fastball. Given all the things our hands have accomplished and still do to this day, they should be pulling off some equally dazzling feats of dexterity
in
bed as well as out.

And yet, for some reason, once we lay our hands on each other, it’s as if we devolve millions of years, resorting to moves that are almost Cro-Magnon in their simplicity. We grab, we grope, we paw our way around. If we’re lucky enough to get ahold of someone’s privates, we oafishly pump up and down like we’re on a pogo stick, or (if it’s a woman) wiggle our finger a little. That’s hardly what we’d call sophisticated, and it’s a crying shame, since in terms of
potential
, hands can do much, much more. Limiting ourselves in this way is like seeing Albert Einstein work as an accountant, or Pavarotti deejay karaoke parties. Contrary to popular opinion, your hands can—and should—provide amazing, earth-moving, angels-singing experiences … that is, if anyone knew what to do with them.

That’s where we come in.

As certified sexological bodyworkers, we’ve been trained to teach people how to rub each other the right way from head to toe and everywhere in between. Genital massage encompasses a large part of our curriculum, and our students are always surprised (and happy!) to find out that there are more than fifty ways to stroke, squeeze, and please someone south of the border. Throw in the techniques we teach students on how to stimulate other areas of the anatomy from the earlobes to the toes, and all told, our students come away with more than 150 new manual moves, from Little Earthquake (which
creates great below-the-belt buzz) to the Twist ’n’ Shout (so named because it will have him hollering for more).

If you had no idea that your hands could make the human body hit a high note in so many ways, that’s only because you’re not used to seeing your hands as the virtuosos they truly are. To help open your eyes to all the pleasurable possibilities that are within your grasp, here are a few things to keep in mind.

And you thought it was all in the fingertips? Your palms, knuckles, nails, and even the webbing
between
your fingers all possess their own unique talents and texture. That means on any given night, you’ve got a full-on buffet of sensory selections to pick from. You could start with some stress-melting rippling on the shoulders, graze your nails down the back or chest, undulate your palm in “the wave” on the lower abdomen, throw in a playful slap or pinch on the posterior … need we go on? Our point is, use your hands well, and sex will never feel the same way twice.

HANDY FACT #2: USING YOUR HANDS DURING INTERCOURSE
CAN TAKE SEX FROM COOL TO CRAZY IN NO TIME

While we think it’s a no-brainer that better manual skills will come in handy during foreplay, what many people don’t realize is that these techniques—even genital massage—can be done
during
intercourse, too. All it takes is a little reaching and/or clever positioning to be joined at the hip and have your mitts down there simultaneously.
And the effects can be incredibly climactic—especially for women, two-thirds of whom don’t regularly reach orgasm through intercourse. The reason? A lack of stimulation to their main hot spot, the clitoris. We’re not saying Big Os are the be-all and end-all of sexual ecstasy, but for those women who would like to reach peaks more often, lending a helping hand during intercourse can help improve the odds immensely.

HANDY FACT #3: GIVING YOURSELF A HAND DURING ORAL SEX
CAN MAKE IT EXPLOSIVE

Oral sex can deliver some pretty sublime sensations, but as anyone who has ever licked his way to lockjaw knows, tongue muscles can tire. Meanwhile, fellatio fans face the problem that the average penis is five to six inches long, while the mouth is only two to three inches deep, past which the gag reflex usually kicks in. But just because we’re saddled with these physiological shortcomings doesn’t mean you just have to suck it up and suffer. Where the mouth and tongue fall short, your hands can easily pick up the slack. By mixing in a few manual moves between licks, you can allow your tongue to take breaks, or you can use your hands to cover more territory than your tongue could ever hope to reach on its own. During oral sex on a man, you can use your hand in conjunction with your mouth to create the illusion that you’re taking him all in without it becoming a pain in the neck (literally). In fact, your hands are so adept at mimicking the sensations your mouth delivers that chances are, those on the receiving end won’t even be able to tell where your mouth ends and your hands begin. And frankly, they won’t care.

HANDY FACT #4: USING YOUR HANDS ALLOWS YOU TO GIVE
YOURSELF THE OPTION OF SAYING “YES, TONIGHT DEAR”
EVEN WHEN YOU’RE BUSHED

We have all had those days where we feel so overworked and exhausted that by the time we trudge to bed, it would take a crane to lift us into position for lovemaking. Maybe that’s why one study by the National Opinion Research Center found that on average, one-third of Americans get it on only a few times a year, or not at all. But if, in theory, you would
like
to connect with the person lying catatonic next to you but just can’t scrounge up the energy, consider hand jobs your low-impact, high-payoff alternative. No one has to climb on top and work up a sweat, or crouch below and head bob or tongue wiggle away. No, the only thing you’ll need to move is your hands. Even just one of them is fine. With such an easy yet satisfying option at your disposal, those nights when you would usually roll over and say, “Not tonight, honey,” might start looking up.

HOW THIS BOOK CAN MAKE YOUR SEX LIFE HOTTER THAN EVER

If sex is such a natural phenomenon, how come there are so many books on how to?
—BETTE MIDLER

Your hands are pretty nifty, but they don’t run on autopilot. They need some guidance from that air traffic control center above—aka your brain. After all, your hands don’t just
know
how to play the piano or type one hundred words per minute. These accomplishments are achieved with the help of teachers, how-to books, or
instructional DVDs, and your skill will only start feeling “natural” if you practice, practice, practice.

While we largely accept this “practice makes perfect” proverb when it comes to work, hobbies, and other activities, we tend to brush this wisdom aside when it comes to sex. It’s as if we just expect that the blueprints for getting it on are ingrained in our genes, in the same way that birds don’t need to be taught to build nests or spiders how to weave webs. This may be true to a small extent. But we’re talking
really
small—as in, maybe deep down humans naturally know to insert item A into slot B, or would at least figure it out in due time—but that’s it. Any sex skill beyond that is learned, plain and simple.

HOW WE GOT SO HANDY WITH OUR HANDS

When strangers ask us, “So what do you do?” our answer often elicits raised eyebrows—and a ton more questions. The first is usually “What the hell is a sexological bodyworker?” First off, as you have probably guessed, we’re not regular massage therapists. Such licensed professionals might know plenty about how to work out the kinks in your lower back, but they receive no training about how to handle certain choice areas below the belt. That’s our area of expertise. But don’t get the wrong idea here; we aren’t running a seedy establishment where exotic women named Blossom or Bunny will give you a happy ending for a small fee. We don’t
give
happy endings to our students; we teach people the hands-on skills they need to create their
own
grand finales, on a partner or on themselves (since operating your own equipment isn’t always as easy as it looks).

Depending on the level and type of class we’re teaching, students might be fully clothed, partially clothed, or au naturel—understandably
an uncomfortable scenario for some, but those who brave their way through those first few awkward moments are often surprised how quickly they can relax and get to work. Some of the techniques we teach are as PG-rated as a shoulder massage; others are a lot racier. For example, did you know that rubbing the clitoris at two o’clock hits its most sensitive spot? Still other techniques may seem totally bizarre, but hey, don’t knock a nostril massage until you’ve tried it. Our students leave armed with a newfound respect for their hands—by far the most underrated, underutilized instruments in their sexual arsenal (although not anymore).

HOW THIS BOOK CAN COME IN HANDY

Ever since we met in a massage workshop in 2001, we have continued our “research,” experimenting with new manual moves on each other (talk about a hard day’s work). We also began teaching classes together, first just to a few friends, then to friends of friends, and the groups just grew from there. If it seems odd to you that people are hungering for instruction in something as simple as how to produce pleasure with their hands, we’d like to argue that it’s
so
basic that people don’t give it much thought at all, and thus aren’t very good at it. Every day we see people botch even the simplest gestures of affection—witness awkward A-frame hugs, limp-lily handshakes—and in the bedroom, this discomfort is magnified tenfold. Perhaps that is why many of us shy away from learning even the basics of how to share the physical contact we all crave. We’d like to change that.

This book is for anyone—man or woman, singles or couples, gay,
straight, bisexual, transsexual, or somewhere in between—who wants to improve his or her skills at the most elemental level at which we give and receive pleasure: touch. Here’s what you can expect to learn in these pages: