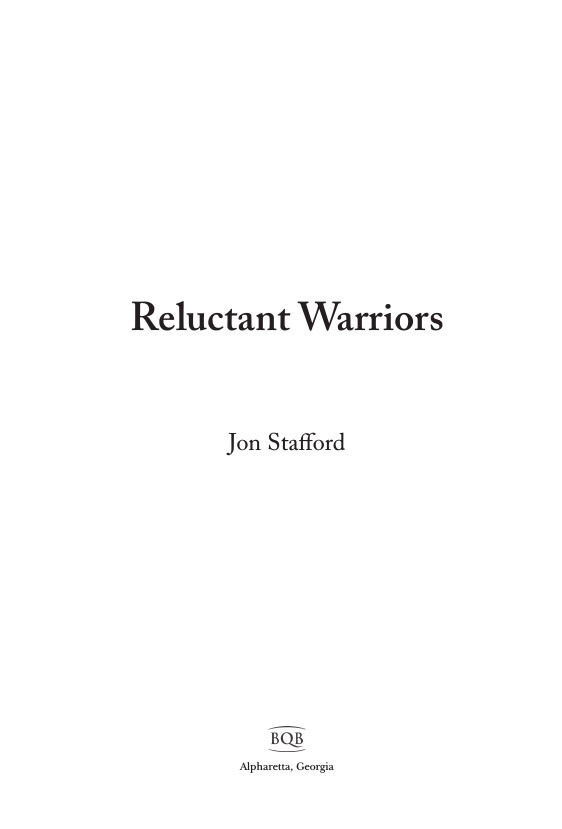 No part of this book may be reproduced in any form or by any means, electronic, mechanical,
digital, photocopying, or recording, except for the inclusion in a review, without
permission in writing from the publisher.

This is a work of fiction. All of the characters, names, incidents, organizations,
and dialogue in this novel are either the products of the author's imagination or
are used fictitiously.

Canst thou not minister to a mind diseas'd,
Pluck from the memory a rooted sorrow,
Raze out the written troubles of the brain,
And with some sweet oblivious antidote
Cleanse the stuff 'd bosom of the perilous stuff
Which weighs upon the heart?

I dedicate this work to three persons:

My father, Nile W. Stafford, now ninety-five years old, was the first reluctant warrior
I knew. From the time I was able to walk, he told my three siblings and me fascinating
stories of his eighteen months with the Twentieth Air Force, sleeping in a tent in
eastern India. He was part of the ill-fated attempt to get B-29s to attack Japan
from there. He almost died, losing forty-five pounds in a matter of weeks. When he
was rotated home, his trunk went in another direction, to Okinawa, and the ship was
sunk by a kamikaze.

Mr. Arthur Lawrence Hellyer III, of Oswego, Illinois, has been my closest friend
since we met in the lunch line as high school freshmen in Naperville, Illinois, in
1962. He encouraged me to write and has been my mentor all of these years.

Finally, Ms. Grace Garwood Wells of Columbia, South Carolina, has reviewed every
story and given much good advice. 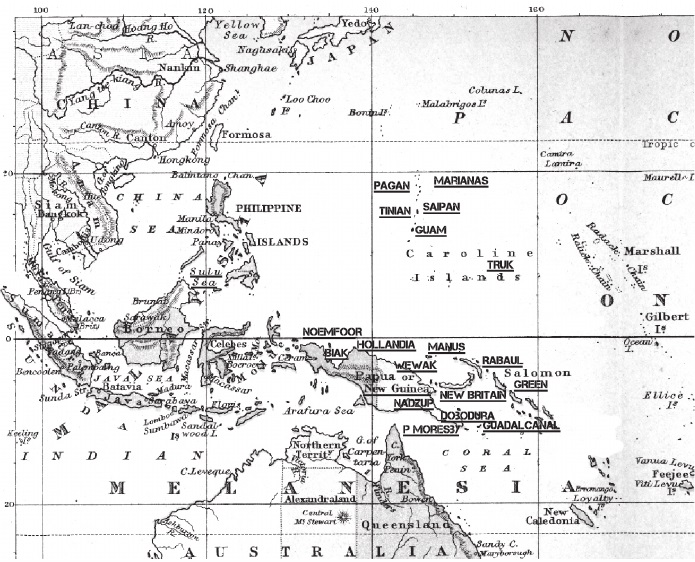 A Dip in the Sea

Preface to “Battle for Huon Gulf”

I
t is a blessing of living in the United States that we have high expectations for
ourselves and for our fellow citizens. Slogans trumpet this, such as the Army's “Be
All You Can Be” and the recent (unsuccessful) national school idea of No Child Left
Behind.

Most would agree that opportunities are there for us to choose and gain with hard
work. But the things we take for granted now were not so easy for young Americans
to obtain sixty-five or so years ago. During their formative years, they were victims
of the Great Depression, the worst economic calamity the nation ever experienced.
Then they were inexorably caught up in World War II, and their lives changed forever.
The men went to foreign places and battled implacable foes under terrible circumstances.
The women had to see their men go off and worry and wait for their return. Years
were taken from them, and over half a million Americans lost their lives. This book
is the story of the sacrifices made by that generation.

I grew up with World War II veterans all around me: next-door neighbors and numerous
relatives. In middle age, they were a sedate lot. Between talking to these men and
laborious reading, I developed a pretty fair idea of what our servicemen were like.
The first books I ever bought were paperback editions of Theodore Roscoe's
Tin Cans
and
Pig Boats
, semi-official histories of our wartime destroyers and submarines I
purchased around 1960.

As a young man, my primer was Samuel Eliot Morison's fourteen-volume
History of United
States Naval Operations in World War II
. From there, I went on to read dozens of
other histories and autobiographies, including much of what was published for decades.

Our servicemen were reluctant warriors. None of the men I met or whose works I read
said they took pleasure in killing their enemies. They seemed profoundly respectful
of the value of life and the finality of death. They were ordinary men who had to
extricate themselves from extraordinary situations. The purpose of this work is to
honor the Americans who served, and to show the types of situations and places in
which they found themselves.

The United States had some sixteen million men in uniform in World War II. Their
conversion into professional soldiers was one of the great stories of all time. Though
the Army had little more than a hundred thousand men in the 1930s, and the Navy fired
not a single real torpedo between the wars, they were victorious on every front.

The metamorphosis was made possible by several factors. Our democratic society produced
millions of capable soldiers and sailors, which both Germany and Japan (and even
Great Britain) thought impossible. Americans were actually tough physically, used
to privation, and somewhat accustomed to a life of discipline. Many grew up during
the hardships of the Great Depression, when having enough to eat was a real issue.
Millions had also worked in such programs as the New Deal's Civilian Conservation
Corps, where young men aged eighteen to twenty-five left home for something similar
to the military: communal living, eating, and working. The Hitler Youth had little
on these guys, and our people showed an innovative spirit that our enemies never
developed with their strict societies, a quality that still makes us the business
center of the world.

Our arms, all produced by the free enterprise system, proved better in most every
case than those fascist Germany and Japan could come up with in many year-long government
programs. For the Army, small arms, such as the Browning .45 pistol, the M-1 rifle,
standard for the infantry, and assault weapons such as the Browning Automatic Rifle
and the Thompson submachine gun, were as good as anything in the world. Our standard
artillery gun, the 105, was the best in the world. Only our principal tank, the Sherman,
was not a success. It was junk compared to German Panthers and Tigers, but like everything
else we made, it was produced in such staggering numbers (fifty thousand) that its
weaknesses did not slow our advances.
Many have argued that it was the best vehicle
that could be mass-produced and shipped on American railroads. The common American
G.I. could fix much of this equipment, while foreign soldiers were only trained for,
and could only do, one task.

The Army Air Force, separated into its own branch in 1947, had two of the world's
best medium bombers: the B-25 and B-26. We also had the world's three best heavy
bombers: the B-17, the B-24 (of which we produced eighteen thousand), and the B-29,
the first weapon that could have literally destroyed the Earth. We produced five
great fighter planes, the Army's P-38, P-47, and P-51, and the Navy's Corsair and
Hellcat. The first four of these, if produced in enough numbers, would have dominated
the skies against either foe (the Hellcat was a little too slow).

The Navy's ships in every category were as good as, or better than, those of our
allies or foes: submarines, destroyers, light and heavy cruisers, battleships, and
aircraft carriers. All were produced in terrific numbers. It is true that German
subs could go deeper than ours. But the loss numbers prove the superiority of our
subs. A total of 782 German U-boats were lost, to our 52 submarines. We had only
one weakness at sea: our torpedo. But this was completely solved by 1943, midway
through the war.

Women heroically took up the slack when the men went into uniform, leaving the home
and replacing men in factories as “Rosie the Riveters.” The United States was revolutionized
business-wise by becoming completely communistic, with our government controlling
what was produced, where, and by whom, and setting pay rates. No new automobiles
were produced during the war, showing the complete sacrifice the public was ready
to make, which is in such stark contrast to our experiences in the Vietnam and the
Iraq wars. Strangely, when the war ended, the entire process was completely reversed.
Capitalism was completely reinstituted.The women mostly returned to being homemakers
and mothering the Baby Boomers, and the men gladly gave up soldiering to return to
civilian life.

The workplace changed radically after the war ended in 1945. While our servicemen
had come off the farm or from menial Depression-eraâtype jobs, they were transformed
into worldwide executives. The pre-war world
had been completely altered. Every notable
US competitor had been ruined: Japan and Germany by our bombs, and Great Britain
by financial and manpower exhaustion. Bolstered by the free college education offered
by the G.I. Bill, and having seen the world, our soldiers could not go back to the
farm. What followed was twenty years of unchecked US dominance, with our companies
proliferating worldwide.

Eventually, we rebuilt our former foes by the Marshall Plan, and even Great Britain
made a comeback. Ironically, we did such a great job on Japan and Germany that both
exceeded us in many areas by the 1960s, and eventually realized more power and dominance
through capitalism than they experienced at the height of their military power in
1942.

The four main characters in this book are a cross-section of our servicemen in the
war. Two are from the Army: Joseph “Chip” Wiley, a scout, and Jimmy DeValery, an
Army Air Force pilot. Two are from different parts of the Navy: Harry Connors, a
submarine pilot, and Theodore Rodgers, Jr., a surface ship commander.

While the stories are mostly about the men, family histories are included for three
of the four (Rodgers has no children). They show families from different states:
Wiley's from South Carolina, though he is born in West Virginia; DeValery's from
North Carolina; Connors' from Iowa; and Rodgers' from Washington, DC, though he was
born in Alabama. There is an overabundance of southerners, but more American soldiers
came from the south than from any other part of the United States.

All of the characters experience lasting marriages. This was very typical of WWII
veterans for several reasons. Many did not especially like the war world they had
seen, and so were happy to be back in the good old United States. They had either
been in combat or caught in boring and unending jobs behind the lines. A wife, regular
meals that did not include Spam, an automobile, and a new suburban home seemed like
paradise in comparison. This era was the beginning of our country becoming wealthier
than anywhere else in the world. It was such a smashing success that we have spent
the last six decades attempting to share our system and “secrets” and make the rest
of the world just like us, which has had mixed results at best.

The war also has
different impacts on the men. Wiley is hurt only physically, though not enough to
impede his earning a living. DeValery is hurt only psychologically, but this takes
years from his life. Connors has only a few bad memories, and Rodgers has none.

The stories were as good as I could make them historically. While the specific characters,
actions, and battles are fictional, they relate to real campaigns: the New Guinea,
Guadalcanal, and Marianas campaign, and the North African campaign. With the exception
of a few persons, like Lakeland Wells in the Rodgers stories, all generals and admirals
are accurately portrayed. Theodore Roosevelt, Jr., and Admirals Crutchley and Halsey
were in command at the times and places cited. All references to weapons, planes,
and ships, and their performances were carefully researched.

These stories do not present the real horrors of the war, where soldiers' lives were
wasted and 293,000 Americans were killed in battle, sometimes being terrorized and
dying in their own waste. If you want the graphic truth, see E.B. Sledge's
With the
Old Breed: At Peleliu and Okinawa
. Neither is the war glorified here. These tales
are simply a series of examples of how Americans rose to the task of fighting World
War II, the central event of recorded history, and handily defeated the most difficult
enemies we ever faced, enemies who actually intended dire consequences for the Earth.
These are the stories of reluctant warriors.