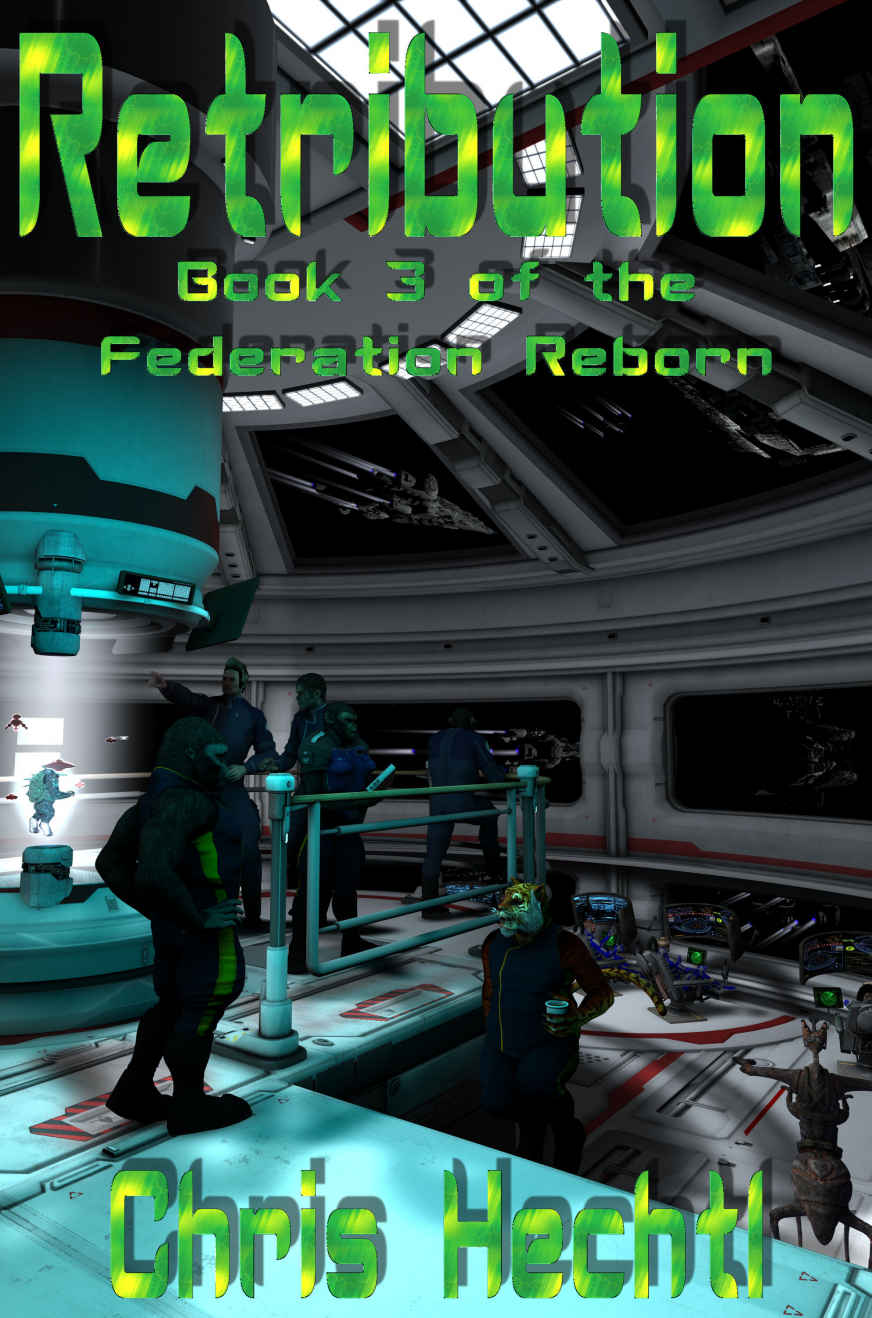 All rights reserved, including the right to reproduce this book and or portions thereof in any form.

Cover art by Chris Hechtl, 2016. The models are owned by their respective creators and used under the usage license. Some models were made by Chris Hechtl; others were purchased on Daz3d.com or Renderosity.com.

This is a work of fiction. All characters, events, and locations are fictional. Some may be parodies. Some characters are with permission. Any resemblance of some characters and places to others are strictly in the mind of the reader. :)

I try to pick different people each time to dedicate my books to since so many people have touched me in so many ways. In this case I'd like to dedicate this book to my Mom, Tanya Burrows, Marie Romero and all the other cancer survivors out there. Keep fighting, where there is life there is hope. Hope that not only we will find better methods of treatment, but that we'll also find a way to beat cancer in all it's forms once and for all.

Note to the reader:

Pirate Rage has turned into something of a mess. I had a bit of a goof when I put the Retribution Fleet in B-97B. It was
supposed
to be B-97C. B-97B is a subsystem of the empty stellar cluster and rarely visited.

Second, I also put
Prowler
UFN-001P jumping for the same star system in chapter 62 and then entering B-97A instead in chapter 63. Oops??

And the last one (I was on a roll apparently) I goofed when I said all 3 of
Caroline's
ships were going to Bek. It didn't make sense to send all 3 with just the helm crew for 1 ship! How'd they find the others so fast? And frieghters? In the rapids??? Even with milspec hardware, it doesn't make sense to risk them and their valuable cargo at this time. Again, oops?? So, I am retconning that too.

I'm going to make the correction before releasing Retribution. So, if you have an old copy, delete it and re-download it.

The United Federation of Sapient Star Systems was founded by several species and became a beacon of civilization for four centuries. Most of the Milky Way Galaxy had been explored in that short time period. One hundred and twenty-one sapient species counted themselves as full-time members. The federation advanced technology and the evolution of its member species. It was a golden age for sentient life in the galaxy. That was, until they made the mistake of expanding their exploration from the Milky Way to the nearest galaxy.

The wormhole gate that was meant to open new worlds to federation explorers quickly became a portal to hell. Xenophobic aliens poured through the gateway, invading federation space and laying waste to everything they found.

Seven centuries after the war wound down, a stasis pod was found in the outskirts of the Senka star system by a tramp tender running from pirates. Within the pod was a long lost federation admiral, Fleet Admiral John Henry Irons.

Admiral Irons and his internal A.I. helped the mostly-female crew escape the pirates, then rebuild the ship during their journey. The admiral dealt with his time shock by setting a goal of restoring the federation and reigniting the light of civilization in the galaxy once more.

But forces were at work to stop him. The pirates were far more than the simple scourge they had first appeared to be. Horath, their homeworld, declared itself an empire under the leadership of Emperor Pyotr Ramichov and launched a brutal offensive to take control of the sector, and eventually, the galaxy. The empire had started on a path of xenophobia and initiated acts of genocide against the populations it conquered.

With the help of some new friends in Pyrax, Irons salvaged a federation warship,
Firefly
, and along with other long-forgotten ships, he was able to use them to fend off the initial pirate invasion. Irons and his newly-reformed Federation Navy was on their way to rebuild the federation, only to be driven out of the system into exile by Pyrax’s cutthroat politics.

Irons had several harrowing adventures along the way before jumping into an empty star system and right into the hands of the pirates. Unaware of who they had captured, Irons was able to lead a successful mutiny and not only captured the ship along with the other ships in the star system, but also used them to defeat the enemy task force staging in the neighboring star system for an invasion of Pyrax.

Once the battle was over, Irons took stock and led his battered forces with the newly-captured ships to Antigua. There he founded a new capital of the federation. Once he had a shipyard and the beginnings of ansible communications underway, he took a side trip to a secret research facility he had used to create the nova bomb and where he had been given his rebuilt body and A.I.

While there, he woke the sleepers that remained and tripped a Xeno virus. He was also declared president pro temp by the last president of the federation in a message that transcended time itself.

He returned from the facility with the group of sleepers, including two additional flag officers. Admiral White, a Neochimp, became their battle fleet commander and took the fight to the enemy in Protodon while Admiral Subert took over Pyrax and set up shop there. Between the two shipyards, the federation began to build the ships and weapons needed to crush the Horathian pirate threat once and for all.

But the Horathians weren't sitting idle. They had begun expanding their empire, and when word of the admiral and his reborn federation was picked up by forces en route to Protodon, they moved in with the intent to destroy the upstarts and crush the seed of free civilization once more.

With grievous losses, Admiral White's Second Fleet fought them off and forced the remaining Horathian warships to retreat.

As the battle for Protodon raged, Admiral Irons ordered
Firefly
to go to Epsilon Triangula to find out what was going on there. She was ambushed by a pirate task force led by Admiral von Berk, who then retreated when fresh federation reinforcements started to flow into the star system. The federation fleet did it's best to stop them, but the enemy used captured and brainwashed victims to pilot their ships to get around the blockades.

Word spread by courier vessel to the Horathian capital. A force was dispatched under Admiral De Gaulte, one of the Horathian Battle Fleet’s leading strategists. He, alongside his OPS officer, Commander Catherine Ramichov, and also the eldest princess of the realm, marshaled a fleet to oppose the federation.

Admiral White's reinforced Second Fleet moved in to block Admiral von Berk, but before they could engage, the battle cruisers they'd fought earlier reappeared in the star system. The battle cruisers fought a delaying action, allowing von Berk to escape.

However, Admiral White received additional reinforcements and went after them. Admiral Von Berk took his captured slaves and personnel and escaped just before Second Fleet arrived with blood in their eye. Trapped in the cul-de-sac system, the remaining Horathians were torn apart in a bloody battle the likes of which they were ill-prepared for.

Admiral White fell back on the neighboring empty system of B95a3 and found additional reinforcements waiting for him there. He began the march towards Dead Drop and the inevitable clash with the Horathian Empire, unaware that Admiral De Gaulte had launched his much larger and more powerful offensive force known as the Retribution Fleet.

Two navies were about to go head to head in a titanic clash with the fate of the galaxy itself in the balance.