Authors: Getting Old Is Murder 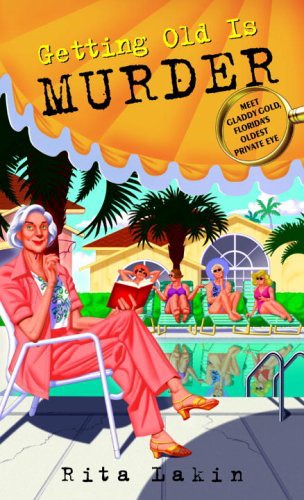 GETTING OLD IS MURDER

Introduction to
Our Characters

Chapter 5: Going into Town,
Or Trying to

Chapter 7: No Rest for the
Weary

Chapter 9: Dinner at the
Deli

Chapter 12: Getting Old Is
Murder

Chapter 13: Funerals on the
Run

Chapter 14: Murder Will Out

Chapter 23: Lust in the Heat

Chapter 26: Death of a Poet

Chapter 27: Digging up the
Dirt?

Chapter 28: Where Did
Everybody Go?

Chapter 32: Back to Reality

Chapter 34: Back in
Business Again

Chapter 37: Stuck in the
Minimall

Chapter 38: No Way to Treat
a Mother

Chapter 40: The Cop and the
Private Eye

Chapter 41: M Is for
Mothers and Murder

Chapter 43: To Sleep,
Perchance to Dream

Chapter 47: The Very Sad
Story of a Very Foolish Mother

Chapter 50: The New Old
(Not an Oxymoron)

Preview of Getting
Old Is the Best Revenge

Who inspired me all my life

Waiting for someone to say,

"Hello in there. Hello."

We all have the same five relatives."

If one life matters

Then all life matters

"The golden years have come at last

Well, the golden years can kiss my ass."

Hy Binder, taken from the Internet

Introduction to Our Characters

Bella Fox, 83
"The shadow." She's so
forgettable, she's perfect for surveillance, but smarter than you think

Sophie Meyerbeer, 80
Master of disguises,
she
lives for color-coordination

THE INHABITANTS OF PHASE TWO

Hy Binder, 88
A man of a thousand jokes, all
of them tasteless

Lola Binder, 78
His wife, who hasn't a
thought in her head that he hasn't put there

Enya Slovak, 84
Survivor of "the camps" but
never survived

Harriet Feder, 44
"Poor Harriet," stuck with
caring for her mother

Esther Feder, 77
Harriet's mom in a
wheelchair. What a nag

Tessie Hoffman, 56
Chubby, in mourning for
her best friend

Millie Weiss, 80
Suffering with Alzheimer's,
and

Sol Spankowitz, 79
A lech after the ladies

THE COP AND THE COP'S POP

Conchetta Aguilar, 38
Her Cuban coffee could
grow hair on your chest

Yolanda Diaz, 22
Her English is bad, but her
heart is good 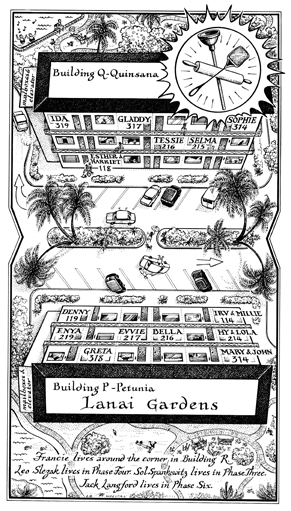 Yiddish (meaning Jewish) came into being between the
ninth and twelfth centuries in Germany as adaptation of German dialect
to the special uses of Jewish religious life.

In the early twentieth century, Yiddish was spoken by
eleven million Jews in Eastern Europe and the United States. Its use
declined radically. However, lately there has been a renewed interest
in embracing Yiddish once again as a connection to Jewish culture.

a curse on you (get cholera)

a lot of nonsense

someone who knows
everything

an exclamation for
emotions

a squirt, a nobody

to coat with butter or
cream cheese

on pins and needles

T
he poison was in the pot
roast.

In a few hours Selma Beller would be dead. This was
regrettable because tomorrow was her birthday and she was so looking
forward to it. Her husband, Ernie, had keeled over at seventy-nine.
Having beaten him at gin rummy and shuffleboard, she had gleefully
intended to beat him yet again, this time to the big eight-oh. Alas,
poor Selma.

While she was waiting to die, Selma was dusting.

Dust was her enemy. And she battled mightily. No
fragile feather duster for her. And forget that sissy stuff like lemon
Pledge. She used good old-fashioned Lysol, confident that neither dust
nor germ escaped its lethal dose. Death to dust, she thought and then
laughed, dust to dust.

Looking up, Selma glanced at the clock. Where
had
the
afternoon gone? It was nearly dinnertime. Too bad her best (and only)
friend, Tessie, was busy tonight with out-of-town visitors. She should
have gone shopping this morning. Oh, well, there was always cottage
cheese, with a piece of cut-up peach and some sour cream. She wrinkled
up her nose. What she really craved was red meat. Bloody and rare.

There was a knock on the door.

Selma groped around for her glasses, misplaced, as
usual. Giving up, she moved as quickly as she could manage toward the
door, automatically straightening the doily on the arm of her emerald
green recliner. Glancing toward the array of grandchildren's photos on
her foyer table, she blew a kiss at the smiling faces.

"Who is it?" she trilled. She would never open the
door to a stranger.

Squinting through the peephole, Selma, though her
vision was blurred, identified the familiar shopping bags with the
Meals on Wheels logo. A volunteer wearing jeans, a windbreaker, a
baseball cap, and sunglasses stood there, arms full.

"Happy birthday to you from Meals on Wheels. A
special introductory order."

"Really?" Selma was feeling the beginnings of hope.
"Something smells wonderful. What's in the bags?"

Practically drooling, Selma unlocked the deadbolt
her
son, Heshy, had installed, then the other two safety locks.

She squinted again as the volunteer entered with the
packages. "Don't I know you? You look familiar. . . ." But Selma was
distracted as she sniffed the air in appreciation. "I can't wait," she
said as she took the bags and carried them into her spotless kitchen.
She quickly unwrapped the containers and began setting them out on her
best Melmac dishes on her small white Formica dinette table.

"I just hope the soup isn't too salty. My blood
pressure, you know."

A wrought-iron chair was pulled out for her.
Smiling,
she let herself be seated.

"At your service, Mrs. Beller."

"What a way to go." Selma giggled, tucking her
napkin
in.

Those were Selma Beller's final words. The last
thing
she
saw as she was starting to lose consciousness was the logo on the Meals
on Wheels shopping bags as the killer calmly refolded them, and her
last fading thought was that the pot roast had been a little stringy. .
. .