“What do you think of this?” Bluebell asked. 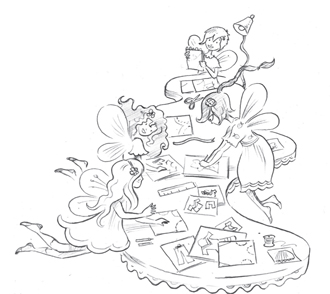 The four friends were gathered around a large glass table in the palace's craft studio, Studio Sublime. They usually spent time together in one of their own wings of the palace, but this task was too important for that. They needed lots of space! The studio took up the whole of the fifth floor of the palace and had floor-to-ceiling windows, which let in the magical fairyland sunlight. Stretched across the ceiling hung threads of moth-silk on which they could pin up paper, or materials, or entire outfits. Bluebell was holding up a large sketchpad that was covered in doodles.

“Or this one?” She turned the page to a sunshine-yellow summer dress.

Buttercup smiledÂ â yellow was her favourite colour. “Could it be made of yellow daffodil petals, with beeswax buttons and a buttercup-petal trim?”

“That sounds wonderful,” Rosa said. “But do you think we'll be able to design the outfits in time? We only have one day to plan everything.”

“I'm worried,” said Violet with a frown. “It's tomorrow, and there's so much to do!”

Just then, the glass door of the studio burst open, and a green-winged fairy-helper flew in.

“I found these for you in the basement,” she said in a squeaky voice, holding up a great pile of fabric that shimmered with fairy magic.

“Thank you ever so much,” Rosa said, fluttering over to meet the little fairy and take the piles of fabric that weighed her down. But instead of the helper flying off quickly as usual, she remained on the spot.

“There was something else,” she began quietly. “The fairy king and queen have sent you a special mirror-gram.” The fairy-helper reached into a little velvet bag that was hooked on her arm. She brought out a mirror, as thin as the rice paper Buttercup used to decorate her delicious cupcakes.

The helper held it out towards the fashion fairy princesses, and they crowded round it, peering in. 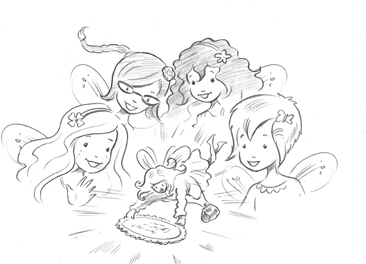 At first all Rosa could see was their own reflections in the mirror. But then clouds swam across the glass, and as they disappeared, the king and queen's faces became visible.

“We are sorry to disturb you again, fairy princesses,” began the king.

“But there was something we forgot to tell you this morning,” the queen continued. “We know this is a big task to ask of you, and so we want to make sure you're rewarded.”

The king's grey eyes looked serious. “If the show is successful,” he said, “we'd like to thank you by giving you a stone in Paradise Square.”

“You'll be beside all the other fairies of Sparkle City who've done something special for us,” added the queen. “Thank you, fairy princesses, for all you are doing for our jubilee.”

Before anyone could reply, the vision in the mirror began to fade.

The fairy princesses looked at one another, reached out to hold hands and started jumping with excitement. Paradise SquareÂ â it was amazing! The square's pavements were engraved with the names of very important Sparkle City inhabitantsÂ â it was something very special indeed to have your name written there.

“Now we have to make sure our fashion show is amazingÂ â it's got to be a catwalk extravaganza!” cried Rosa.

“I can't believe we've been given the chance to have our names placed in Paradise Square!” said Bluebell, spinning on the spot.

“Well, we must make sure we have an amazing grand finale. It wouldn't be a fashion show without one!” added Buttercup.

Violet was already pulling out the fabrics the fairy-helper had brought, throwing them on to the studio's tables. “The problem is, how are we going to get it done in time?” Violet's long curly hair swung about as she waved different pieces of material in the air. 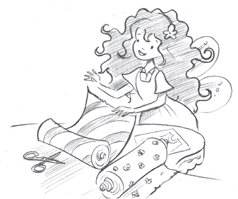 “Let's try not to panic,” said Rosa, putting a hand on Violet's shoulder. “If we organize ourselves properly, I'm sure we can do it.”

“Hmm, let me think about this,” said Rosa. She chewed on a pink glitter pencil, deep in thought. 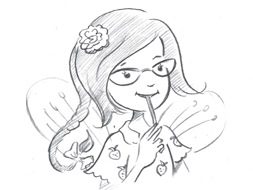 Her friends waited in silence. Knowing how practical Rosa was, they could always rely on her to come up with a good solution.

“OK, I think the problem is that we're all here together. What we need to do is split up. That'll save us time,” Rosa began. “As well as working on the designs in the studio, some of us need to go out shopping. We need to find inspiration and different pieces for our outfits.”

“Great idea!” the others replied.

Rosa smiled. “Good. So how about Violet and I go shopping, while Bluebell and Buttercup stay here and work on the designs and fabric we already have?”

“We won't be too long,” Rosa called over her shoulder.
But in just one day
, thought Rosa,
will we be able to create fashions that everyone in Sparkle City will love, as well as designing outfits fit for a king and queen's jubilee?
Rosa crossed her fingers tightly as they flew out of the door. She hoped so!

Rosa stopped at the door of the palace. “Can we borrow two shopping-storks, please?” she asked the fairy-helper who took care of the storks.

“Of course, Princess Rosa,” she replied, and called two storks out of their nesting room.

The pale pink storks were the perfect shopping accessory. Rosa loved themÂ â and not just because they were her favourite colour! The large birds each carried a giant net that held a lot more than two fairies would ever be able to carry!

The two fairy princesses flew over the cobbled palace drive, the shopping-storks close behind them. There was nothing that beat the feeling of flying, Rosa thought as she swept past the pony stables, the wild-flower meadow and the lily-pad lake. She beat her pink wings in the mild spring air and felt her long hair billowing behind her and the gentle sunshine warming her face. 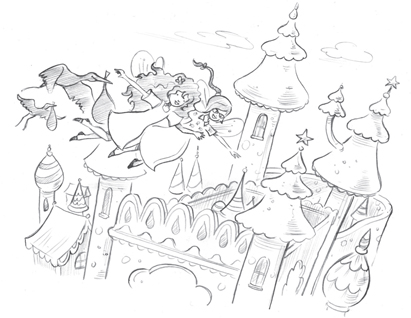 Soon they were floating smoothly down on to Diamond Boulevard. It was the fairy princesses' favourite street, because it was full of fashion shops!

“Shall we start with Jewels and Gems?” Violet suggested. “We need lots of jewellery to accessorize the outfits.”

Rosa nodded and ducked into the small arched doorway of the silver-fronted shop. The shopping-storks waited patiently outside.

Wind chimes tinkled gently as the two fairy princesses entered. Rosa grinned, even though she'd been in this shop hundreds of times before. It was magical, like being inside a giant jewellery box, with hundreds of gems hanging from the ceiling. They were threaded on to loops of silvery shimmer-shoot strands that grew in Twinkle Meadow.

“Hello, Rosa and Violet, what can I do for you?” smiled the red-headed fairy behind the counter. She was wearing so much jewellery it was hard to spot herÂ â she blended into the shop like one giant gem. 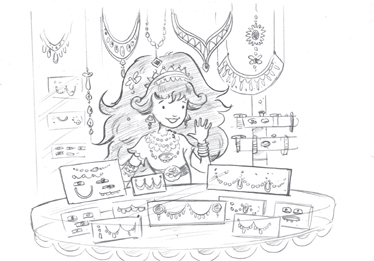 “We're in a bit of a rush, I'm afraid,” explained Rosa. “We're putting on a fashion show for the king and queen's jubilee, and we need some beautiful jewellery for our outfits. Can you help?”

“I most certainly can!” Ivy replied. She began rushing around the shop so fast that she became just a blur of sparkling colours.

Minutes later, Violet and Rosa were looking through the many necklaces, earrings, bracelets and rings that Ivy had picked out for them. There was a shiny oval-shaped ring, and when Violet tried it on it changed to lilac, the exact same colour as her pinafore dress. Then, as Rosa slipped it on her finger, it became hot pinkÂ â to match her fuchsia bell skirt.

Then Ivy showed them a pair of dragonfly earrings. When Violet clipped them on, they came to life beneath each ear, fluttering as Violet turned her head to check them out in the mirror. There was also a heather-thread necklace, a pink-pearl tiara and a bracelet made of tiny ruby strawberries that smelled just like the fruit.

“We'll take them all!” Rosa decided, reaching into her pocket and passing Ivy several sparkling bags of fairy dust. Ivy grinned and popped the dust into a silver unicorn-bank on the counter.

“You'll come along to the show, won't you, Ivy?” Violet asked as they left the shop.

Ivy nodded. “Of course,” she said. “In fact, would you like some help tomorrow? I'd love to be a fairy-stylist for you!”

“That would be wonderful, thank you!” cried Rosa, giving Ivy a hug.

Rosa could have stayed there for hours, but they had to get on! The two fairy princesses carefully placed the jewellery they'd bought into the shopping-storks' nets.

“Where next?” Violet asked.

But before Rosa could answer, she heard someone call her name.

The fairy princess spun round. Behind her on the path were two pretty fairiesÂ â a petite blonde one dressed in a duck-egg-blue shirt dress and a fairy with curly auburn hair wearing a matching amber wrap-around dress.

“Holly, Summer, great to see you!” Rosa replied with a smile.

“Hi!” Violet joined in. “How are you? I'm sorry but we can't stop to chatÂ â we're planning the jubilee fashion show and there's still
loads
to do!”

Summer and Holly began to flutter into Jewels and Gems, but just as the door-chime tinkled, Rosa cried, “Wait!” 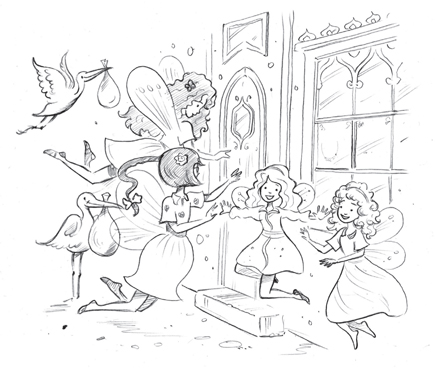 The two fairies stuck their heads back out of the shop. “Is everything OK?” asked Holly.

“Yes, but I just had an idea,” said Rosa. “Would you two be models for us at the show? We need more than just the four of us, and you would be perfect!”

“Of courseÂ â we'd love to!” Summer was beaming.

“It would be a pleasure!” added Holly.

“Great, that's all set then. See you tomorrow!” Rosa zoomed up into the air, waving as she flew.

The shopping-storks and Violet were close behind her. They quickly flew to Magic Moments, a very special shop at the end of the boulevard, which specialized in enchantments for outfits.

“How about a Glow-Me-Up?” suggested the fairy owner, Opal, when Violet and Rosa explained about the fashion show.

“Perfect!” said Violet. It was a string of glow-worms which, when hung around a fairy's neck, would light up her entire outfit like a star.

The fairy princesses also bought a halo hairpiece, a cancan skirt that danced with real bees, and wing-tip sparkles. They were delighted when Opal agreed to be a stylist for them too, and were soon on their way again. By now, the storks' nets were bulging with their shopping.

“Next stop, Sparkle Sensations!” Violet called. “We're sure to get some great inspiration there.”

Moments later, the two fairy princesses stood in their favourite shop in the whole of Sparkle City, gazing in awe at the clothes that surrounded them. Sparkle Sensations was filled with every type of clothing you could imagineÂ â from silk tops and lacy blouses to net skirts and ball gowns. Topaz, the owner, had arranged everything by colour so it was just like being in a rainbow. Rosa spun round, taking in the red, orange, yellow, green, blue, indigo and violet. 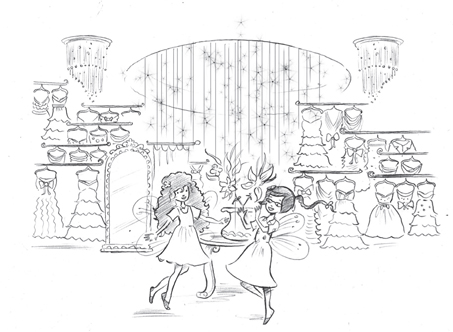 “Hello, fairies,” called Topaz from behind the counter, “let me know if you need any help, won't you?”

“AbsolutelyÂ â you are my best customers, after all!” Topaz grinned, and went back to serving a fairy-helper.

“Look, Violet, here's a satin bolero with lace sleeves,” said Rosa. “We could make one in yellow spider-silk to go with the summer dress.”

Violet nodded as she stroked a super-soft scarf. “And we could make a dandelion-seed scarf, perfect for chilly evenings.”

“Brilliant idea!” Rosa clapped her hands, but then her smile vanished. “But we still don't have an amazing final piece to end the show.Â .Â .”

Violet suddenly turned to Rosa. “Oh dear! What in fairyland will we do?”