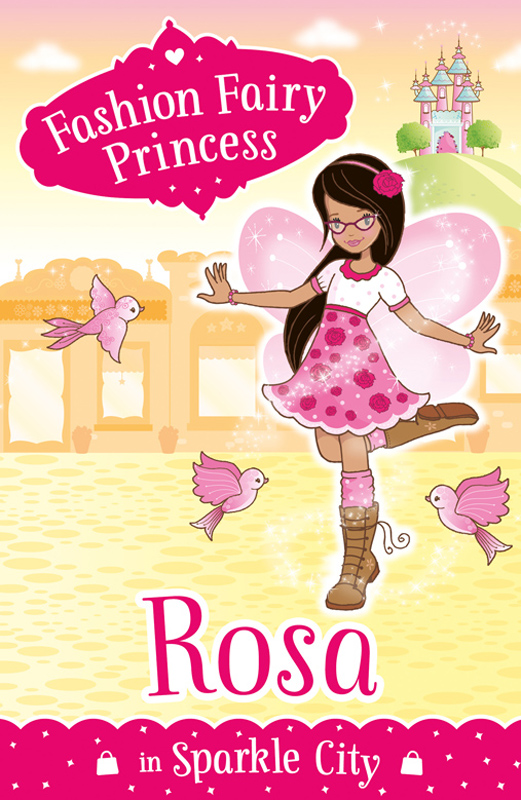 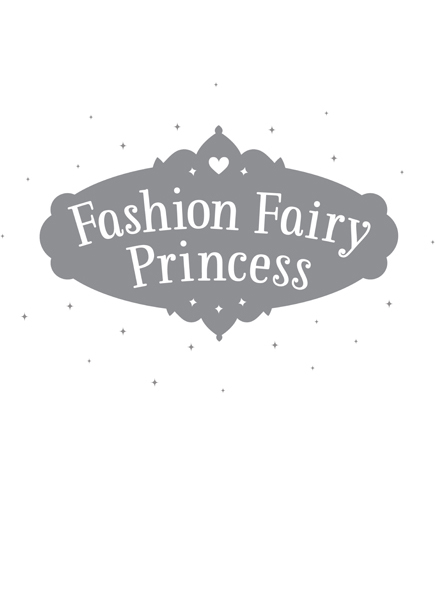 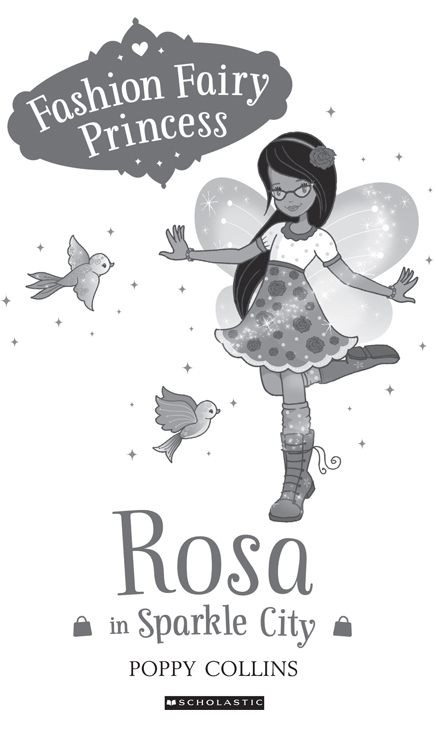 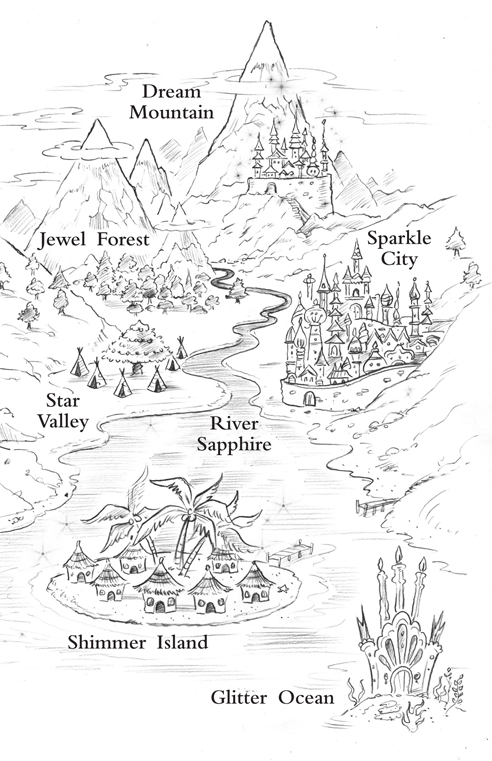 Welcome to the world of the

and friends on their magical adventures

They can't wait to visit

KNOCK KNOCK!
Rosa jumped up from her pink glass dressing table, where she'd been combing her long dark hair, and fluttered over to the bedroom door. Who could it be? She guessed it was one of her three best friends, but it was early on a Saturday morning, and Rosa was almost always the first fashion fairy princess to wake up. 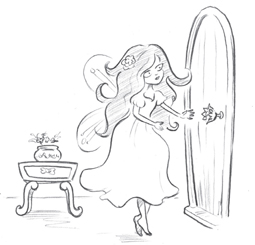 She twisted the rose-shaped doorknob and slowly opened the door.

“Good morning, Princess Rosa,” said a tiny double-winged fairy-helper who stood in the palace corridor. “Your presence is required in the Royal Hall. Please hurryÂ â the king and queen are waiting for you.” With that, the dainty fairy flew off to her next errand, her wings fluttering so fast she became just a blur.

Rosa's mouth dropped open in surpriseÂ â why did the fairy king and queen want to see her? But there was no time to worry about that! The fairy princess quickly changed from her pink cotton nightgown into a fuchsia bell skirt and a strawberry-print top. She hoped it was smart enough for the fairy king and queen. They lived in a separate wing of Glimmershine Palace, which they didn't leave very often, as the king was old and rather frail. It meant the fairy princesses rarely saw them, so Rosa knew this must be something important. She pulled her long hair into a high ponytail, slipped on her favourite pink sparkly shoes and adjusted her dark-rimmed glasses to complete her look, then she rushed out to the hallway.

“Rosa! We were just coming to get you!” said Bluebell. The fashion fairy princess was fluttering in the corridor next to Rosa's two other best friends, Buttercup and Violet.

“Did you get the message?” asked Violet, her brown eyes bright with excitement.

One after the other, the four fashion fairy princesses flew as quickly as they could along the white marble hallway. They fluttered down the sweeping glass staircase without putting so much as a foot on a step. At the bottom of the stairs, they spun round in the diamond-tiled entrance hall and then sped off along the ground-floor corridor to the right. This led to the king and queen's wing of Glimmershine Palace, past walls that were filled with magical portraits of all the past fairy kings and queens. When she was little, Rosa spent hours in this hallway just looking at the beautiful pictures. She secretly hoped she might become the fairy queen one day.

The corridor began to widen, and the fairy princesses soon saw a huge arched golden door, guarded by a tall, golden-feathered cockerel. “Cock-a-doodle-doo!” it cried in a loud, ringing voice.

Rosa looked round at her three friends. She suddenly felt very nervous!

Fortunately, nothing seemed to scare Violet. She had already stepped forward, pushing the heavy golden door with one hand. The other fashion fairy princesses shuffled along behind her, letting out gasps as they took in the Royal Hall. They'd been there before, on very special occasions, but the room still took their breath away. It was enormous, with a sparkling glass domed roof. The bright fairyland sunshine that poured through it made everything in the hall glistenÂ â especially the jewel-covered walls and silver-stone floor.

Along both the right and left walls stood the cutest pink fairy-bunnies Rosa had ever seen, each with miniature wings and holding tiny trumpets. She noticed that at the end of the Royal Hall, the two ruby thrones were empty. The fairy princesses waited, not daring to move a muscle.

Suddenly, the fairy-bunnies brought their trumpets to their mouths. They chorused a short rising melody that was both beautiful and important-sounding. The four friends grabbed each other's hands tightly, and as the bunnies lowered their trumpets, in came the fairy king and queen through an arch at the back of the hall. 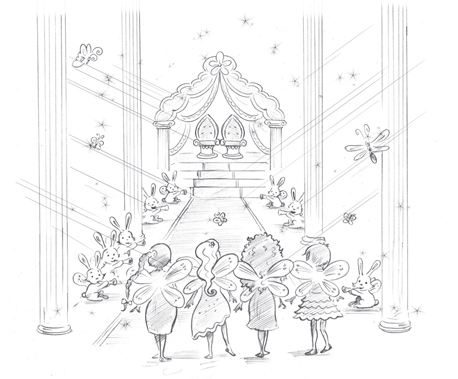 The fairy royalty wore matching blue-sequinned cloaks, their sky-blue wings just visible under them. The queen's thick blonde hair was topped with a delicate gold tiara, while the king wore an eight-pointed golden crown. They fluttered in slowly, the king helping himself along with a pearl-topped walking stick. The fairies watched in silence as the pair lowered themselves on to their ruby thrones.

“Hello, fairy princesses,” the fairy king began in a deep voice. The four friends curtseyed deeply. “Thank you for coming to see us.” 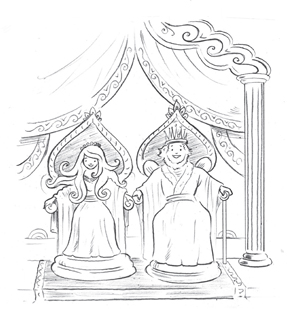 Rosa relaxed her grip on Buttercup's hand. The king didn't sound very scary at all.

“We have something very important to ask of you,” the queen continued in a light, musical voice. Her beautiful green eyes glittered as she spoke. “We know how talented you fairy princesses are, especially when it comes to fashion. And so we'd like you to put on a fashion show for us.”

“But this is no ordinary fashion show,” said the king. “It will be to celebrate our golden jubilee tomorrow. We'd like it to be extra special to mark our fifty years as fairy king and queen.”

“Not only that, but your designs will make up the next season's fashion in Sparkle City,” said the queen. “So it's also important to design outfits that everyone here will love.”

“Yes, Your Majesties,” replied the four friends in unison as they curtseyed again.

“We will do our very, very best,” added Violet.

The king's face broke into a huge beam. “Thank you, fairy princesses,” he said.

The queen nodded. “We cannot wait to see your fashion fairy creations!”