Read Scholar: A Novel in the Imager Portfolio Online

Scholar: A Novel in the Imager Portfolio 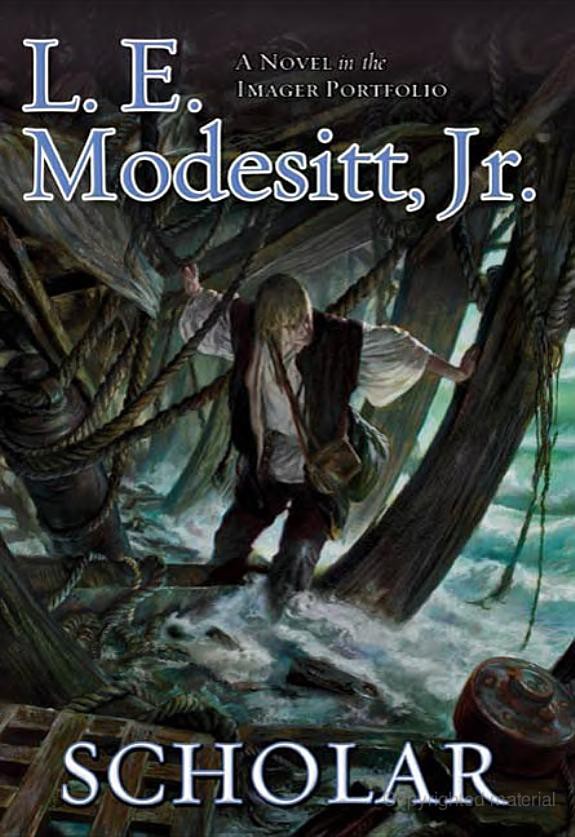 For Richard Karsh, doctor, scholar of medicine and pop music, and friend

“You’d think the Tilborans would have more sense,” snapped Bhayar. “Some of them, anyway.” His dark blue eyes appeared almost black in the dim light of the small study that adjoined his receiving chamber. In the midafternoon of summer, the air barely moved, even with the high arched ceilings, and when it did, it only brought the smells of the city up the hill to the palace overlooking the harbor of Solis. He walked to the map displayed on the wooden stand, scowled, and then looked to the man in scholar’s brown.

“Why would you think that?” Quaeryt replied in the formal Bovarian in which he’d been addressed, as always. He smiled politely, his thin lips quirking up slightly at the corners. Despite the itching of his slightly-too-long nose, he did not scratch it.

“Don’t bait me, scholar.” The Lord of Telaryn added only a slight emphasis to the last word. “Tell me what you have in mind.”

“Only your best interests, my lord.” Quaeryt shifted his weight off his slightly shorter left leg. The higher heel of his left boot helped, but the leg ached when he stood for long periods.

“When you talk like that, you remind me of the sycophants who surrounded my sire in his last days.”

“Have you considered why I—or they—would avoid answering a demand delivered so forcefully?” Quaeryt grinned.

Abruptly, Bhayar laughed. “There are times … friend or no friend…”

“Every time anything went wrong in Tilbor immediately after your sire conquered it, his first solution was to issue an edict. If that didn’t work, he killed people.”

“It did indeed. It still does. But … exactly how many of your soldiers are stationed in Tilbor and not on the borders with Bovaria? How many weeks would it take to get the companies from Tilbora or Noira to Solis—if you had enough ships to carry them?”

“I could commandeer merchantmen.”

“How long before they became as unhappy with you as the Tilborans are?”

“Not until they forget what he did to the Pharsi merchants in Eshtora. How long will that be? As long as you’ve had garrisons in Tilbor?”

“Quaeryt! Enough of your questions. You’re as bad as Uhlyn was. Scholars and imagers! A ruler can’t live with them, and a strong one can’t live without them. You’ll turn my hair as white as yours.” A fist outsized for the lord’s wiry frame slammed onto the pale goldenwood of the desk.

That was always Bhayar’s rejoinder when he tired of dealing with the issues behind the questions, Quaeryt mused behind a pleasant smile, and never mind the fact that Quaeryt’s hair was white blond and that he was actually a year younger than Bhayar, who had just turned thirty.

“Namer’s demons, I hate Solis in the summer. I’d even prefer the mist stench of Extela when the winds blow off the mountain.”

Mist stench?
Abruptly, Quaeryt recalled that some of the ancient volcanoes north of the old capital occasionally still belched ash and fumes.

Bhayar blotted his forehead with a linen cloth already soiled in more places than not, for all that it had been fresh and white at noon. “Instead of raising all these questions, why don’t you offer an answer?”

Quaeryt grinned. “I don’t recall your asking for one.”

“I’m asking now. What do you suggest, my friend, the so-knowledgeable scholar? Tell me what I can do to remove the troops from Tilbor without immediately inviting another rebellion?”

“Let me think about it.”

“After breakfast—eighth glass of the morning,” suggested Quaeryt, knowing that was too late for the early-rising lord.

“Seventh glass. I still don’t see why you don’t want to stay in the palace. I’ve offered far better quarters than you have on Scholarium Hill…”

“The quarters are indeed better, but I’d end up being of no help to you.”
Or to me.
“And rulers soon tire of friends or retainers who outlive their usefulness.” That was accurate, but not the real reason for his determination to avoid the palace for as long as possible. “Besides, you’d want me to get up at the Namer-fired glass that you do.”

“You’re not that lazy. You just like me to think you are.”

You and everyone else.
“But I am. I don’t work the way you do. I’m just an itinerant scholar fortunate enough to have schooled some with the Lord of Telaryn.”

“Bah … we’ll let everyone else think that.…” Bhayar blotted his forehead again. “Why did he insist on moving the capitol here?” Before Quaeryt could have answered, not that he had any intention of doing so, the lord went on, “I know. I know. A port city on a big river and a good harbor makes more sense for trade and for moving armies. And Grandmere…” He shook his head. “I don’t have to like it.”

Quaeryt wondered about what Bhayar might have said about his grandmother, but decided not to ask. He’d pressed enough. “Tomorrow at seventh glass, then, sire?”

“Go!” Bhayar shook his head, but then grinned again.

“I hear and obey.” Quaeryt’s words were light, verging on the sardonic.

As he left the study and entered the private corridor separating the receiving hall from the study, Quaeryt forced himself to walk without limping, uncomfortable as it was, but he tried never to limp in the palace or when he was around Bhayar. He glanced into the large chamber, on the third level, the highest one in the palace, where, when necessary, Bhayar sat on the gilded throne that had been brought from Extela by his sire sixteen years before and received visitors or handed down formal pronouncements or sentences. Even the wide windows didn’t help much in keeping the chamber cool in the height of summer.

Quaeryt made his way to the west end of the private corridor, where the palace guard unlocked the iron-grille door, allowing the scholar to make his way down the windowless and stifling staircase, past the grille door on the second level to the main-level grille door. Another guard unlocked that door as well. Quaeryt stepped carefully along the shaded and colonnaded walk that bordered the west end of the palace gardens, taking his time so that he could enjoy the cooler air created by the fountains. His enjoyment was always tempered by the knowledge that oxen—and sometimes prisoners—turned the capstan-like pumps that lifted the water to the reservoirs on the uppermost level at the rear of the palace. He was careful not to look into the gardens. After passing the guard at the top of the side steps, he walked down to the gate used by favored vendors and visitors to the palace.