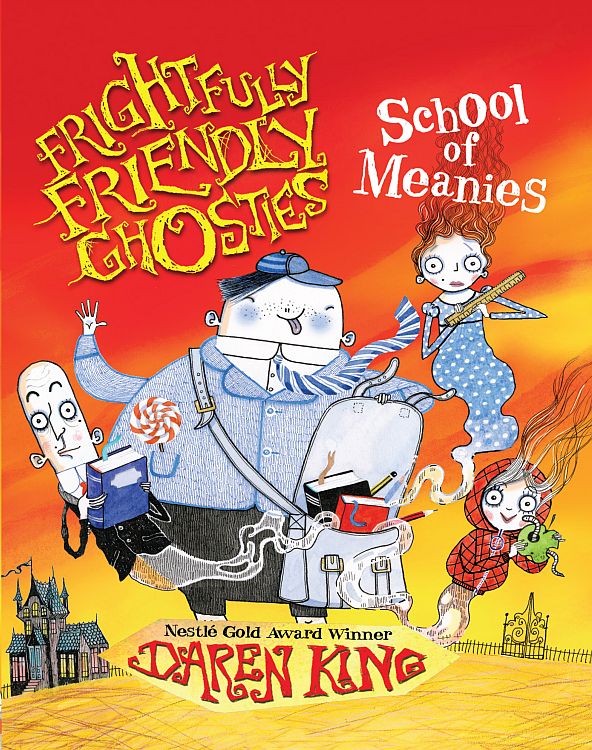 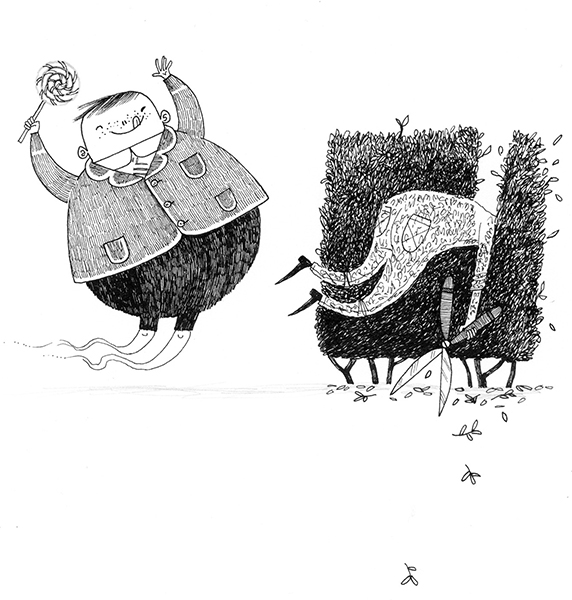 Sensible Hare and the Case of Carrots 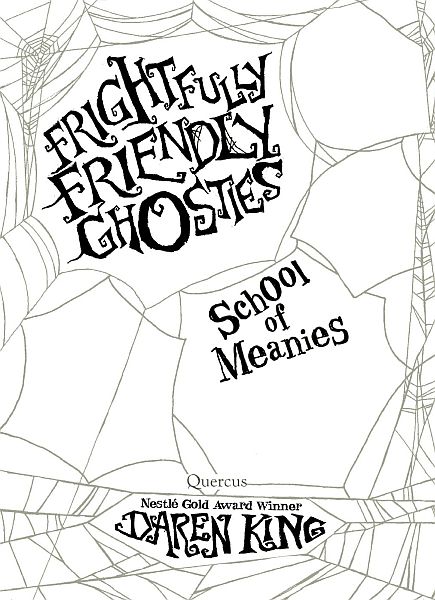 First published in the United States by Quercus in 2014

About the Author and Illustrator 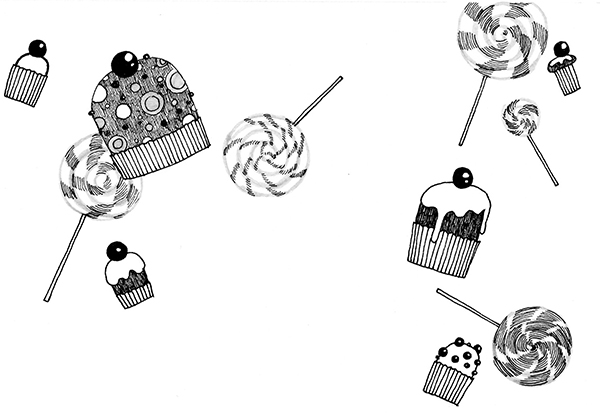 Ghost School is boring. You get told off for bumping!

It was Tabitha Tumbly. Tabitha is the youngest grown-up ghosty and the nicest of them all—no fibbing!

“Humphrey Bump, what happened to that box of cake and lollipops?”

Tabitha folded her arms and frowned at the upside-down cardboard box and the lollipops scattered across the kitchen floor and the splodged cake.

“Humphrey, are you fibbing?”

We were in the kitchen at the back of the house, just me and Tabitha, and it was a school day but I didn’t want to go.

“Put your blazer on,” Tabitha said. “I’ll float you to school.”

I looked at where I’d left my blazer in a heap on the kitchen table. “I’m not going to school today.”

“But it’s your first day back.”

“That’s why I’m not going. The first day back is horrible.”

My blazer floated off the table and hovered behind me like a bat. Tabitha is a poltergeist. She can move things with her powers. No fibbing!

“Why don’t you like the first day?” Tabitha asked as I poked my arms into the blazer.

“It’s horrible. You haven’t seen the other children all summer, and then you have to see them—and they make fun of you because you’re fat!”

“Children can be so mean,” Wither said, floating in from the garden. “And, Humphrey, you’re not fat. You’re just, er, overly proportioned.”

Wither is a poet. That’s why nothing he says makes any sense.

“Come along, Humphrey,” Tabitha said, floating into the hall. “We’d better wisp, or you’ll be late.”

“I’ll wisp with you,” said Wither.

“It’s a lovely day for a wisp, and I need to stretch my transparent bits.”

Ghost School used to be a still-alive school, in the old days, but then it got run down, so the still-alives built a new school on the other side of the village.

“Wait,” I said as Ghost School loomed into view. “I have to tie my shoelaces.” And I wisped behind an old oak tree and hid.

“Humphrey?” Tabitha said, floating back and forth. “Humphrey, where did you go?”

The two grown-up ghosties peered around the trunk, and Tabitha took my hand and led me back to the path.

“You’ll be fine when you get there and see your friends waiting for you,” Wither said. 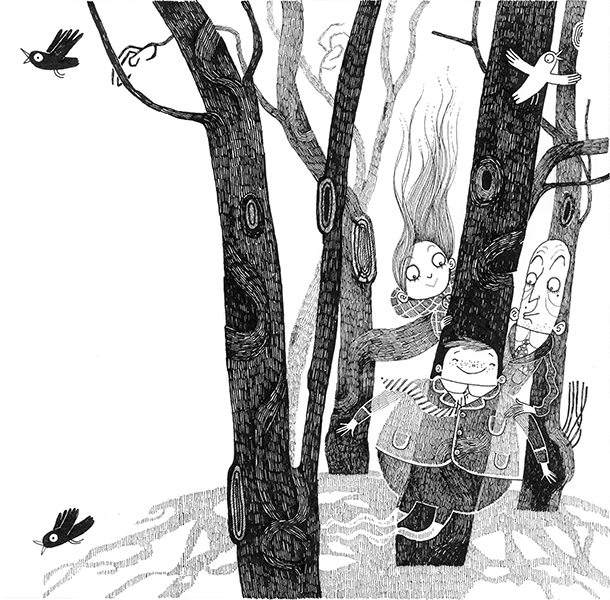 But then I spotted Samuel Spook and Phil and Fay Phantom flitting across the playground, and I let go of Tabitha’s hand and bounced off through the school gates. 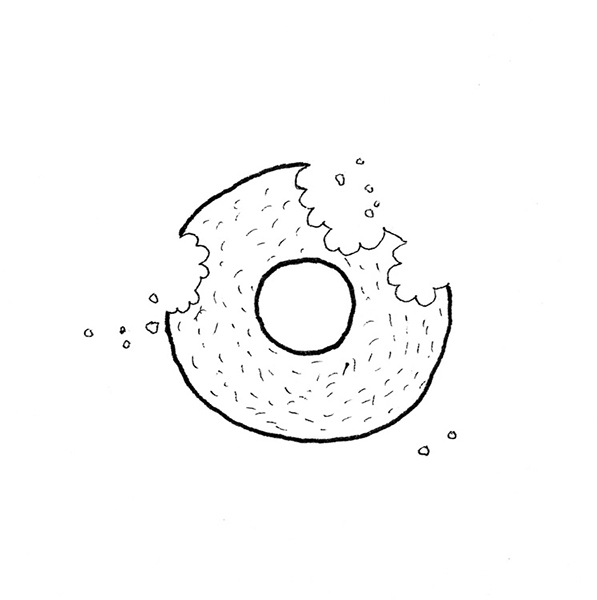 I’d practiced saying that all the way home, but then I saw Tabitha and Agatha chopping vegetables in the kitchen, and the words bounced about inside my head, and when I opened my mouth nothing came out.

“Humphrey, how was your first day back at Ghost School?” Tabitha asked as carrots rolled across the cutting board.

“Dinner will be ready soon,” Tabitha said. “Pie, with your favorite side helping of sausages, pie, sausage pie, french fries, pie and pizza.”

“Us girls are having salad,” Agatha said, biting a pointy, pointless carrot.

“I’m not hungry,” I said, even though my tummy felt like a cave.

“That’s not like you,” Pamela said, emerging from the cellar, her arms piled up with plates. Pamela Fraidy is always nervous, so the plates rattled and clanged.

“Humphrey,” Agatha said as I floated out to the hall, “you look as if you’ve found a lollipop and dropped it.”

On the stairs I floated past Wither and Charlie Vapor. Charlie winked at me and took off his hat.

“Master Bump,” Wither said, “Charlie doffed his trilby, and you didn’t so much as bid him good day.”

“Humphrey is sulking,” Charlie said. “Today was the first day back at school. He’ll feel right as rain tomorrow.”

At the top of the stairs I bumped through the bedroom door, then bumped it closed behind me. I had my own bedroom now that the still-alives had moved out. The grown-up ghosties shared the four-poster bed in their old room.

I rummaged through my blazer pockets and
pulled out a fluffy doughnut. I was halfway through munching it when I heard Charlie and Tabitha talking on the landing. 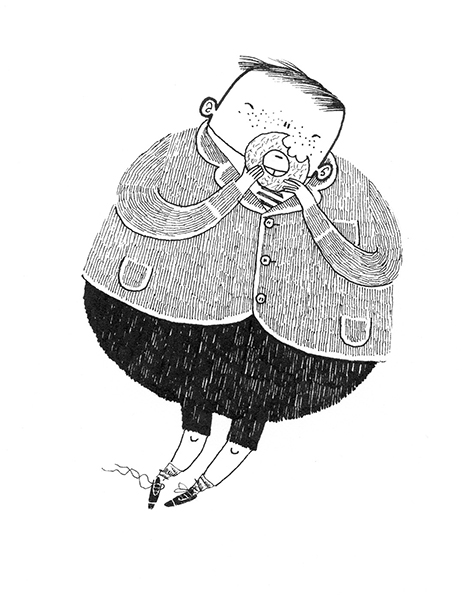 “I don’t know what’s gotten into him,” Tabitha was saying. “He used to love Ghost School. Have a word with him, Charlie.”

“You talk to him, Tabitha. You’re closer to him in age. Humphrey won’t listen to an old stooge like me.”

“But you’re a man, Charlie. All boys
together! And you can pass through. In you float!”

Charlie Vapor can pass through doors and walls and, well, anything—even when he’s got his hat on. I’m not telling fibs!

I’d just taken another bite of the doughnut when Charlie’s head passed through the bedroom door.

Charlie winked at me and doffed his hat. “Are you all right, son?” he said in his cockney accent.

I nodded. My mouth was full.

“Glad to hear it,” Charlie said, and he passed back.

The door handle turned by itself—Tabitha using her powers again—and Tabitha floated into the room.

“Humphrey, I’ve brought you a snack,” Tabitha said, and she dropped a crusty pork pie onto the bed.

“That wouldn’t feed a mouse.”

Tabitha smiled, sort of kind but telling me off at the same time. “If you want your dinner, you will have to float to the kitchen.”

“Then there really is something wrong. Either you’re coming down with the flu, or something happened at school and you’re afraid to say what.”

“Nothing happened at school,” I said. “I’m just doing my homework, that’s all.”

“If that’s true, the homework must be haunted and see-through,” Tabitha said, “because all I can see are doughnut crumbs and a grumpy face.”

I looked up at Tabitha’s big eyes and said, “Tabitha, if I tell you something, do you promise not to be cross?”

Tabitha sat beside me on the bed. Well,
floated. Ghosties can’t sit on things, they can only float above things.

“I got expelled,” I told her. “I’ve been thrown out of Ghost School. For good.”

The Violent Years by Paul R. Kavieff
The Mysterious Caravan by Franklin W. Dixon
Forever and Always by Leigh Greenwood
Ice Cap by Chris Knopf
Ugly Ducklings Finish First by Gail, Stacy
Bad to the Bone by Len Levinson
Triple Score by Regina Kyle
Roseblood by Paul Doherty
Summer Of 68: A Zombie Novel by Millikin, Kevin
The Pilgram of Hate by Ellis Peters
Our partner