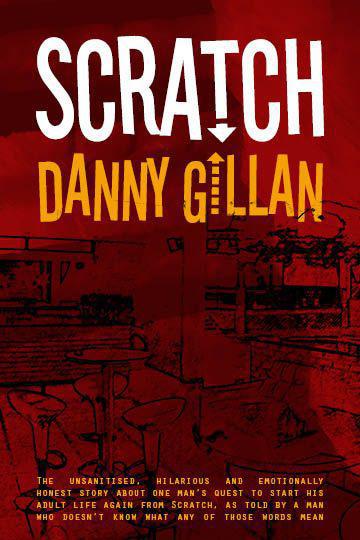 The author assert the moral right under the Copyright, Designs and

Patents Act 1988 to be identified as the author of this work.

All Rights reserved. No part of this publication may be reproduced,

means without the prior written consent of the author, nor be

otherwise circulated in any form of binding or cover other than

Not to be resold.

Published for Kindle by
Jakobian
Books in association with Quinn Publications

I tried not to think about Paula Fraser too often, but Terry had a habit of reminding me of her, even though he didn’t know it.

‘Not sure I get the connection,’ I said.

‘Just figured I’d give you a prompt to get you all miserable and depressed. That’s what you’re meant to do on your birthday, isn’t it? Go on, tell me about the last time you had a hug. And by
hug
I mean
so adventurous it hurts sex
,
obviously.’
Best
-mate
is a relative term. I liked Terry a lot, but something about the word
best
didn’t always seem to fit. Especially after a couple of pints in The
Fixx
.

I sighed. ‘It was a few months ago and involved a lot of alcohol, so the details are fuzzy. She was Irish, I remember that much.’

‘I reckon you’re a bit obsessed with Irish women.’

‘The last twice you’ve been drunk enough to admit you fancied someone off the telly they’ve been Irish.’

‘Only because the last twice I’ve been in your flat we’ve watched
The Commitments
and then every episode of
Father Ted
, including the one with
Dervla
Kirwan
in it.’

‘Aye, at your suggestion.’

‘Whatever. Continue.’ I must have looked scared, because he went on to clarify. ‘Fuck’s sake, Jim. I’m not asking you about the last time you were in
love
, or the
first
, God forbid. Just, you know, your last
hug
. Which I’ll point out again is a euphemism for—‘

‘I
know
. But unlike you I’m not into telling tales.’

‘Yep, I am.’ I finished my pint and looked at the table.

‘Christ, look at you! You
are
fucking miserable. You’re only thirty-three, mate. It’s not
all
over, yet.

It’s when you hit thirty-five you need to start worrying, you’re fine till then.’

‘
S’what
I’m here for.’ Terry tore open his fifth bag of crisps. ‘Your round,’ he mumbled through a mouthful of Smokey Bacon.

‘Okay. New topic of conversation required when I get back.’

‘On it. I have
hunners
. Get more crisps while you’re up, cheers.’

As I headed for the bar I reflected, not for the first time, how strange it must be to live inside Terry Kendal’s head. To my knowledge, in the two years I’d known him Terry had never so much as held a girl’s hand. He
talked
about women a lot, but the only people he ever eyed-up when he thought I wasn’t watching were guys - specifically well-built, over-tanned guys, generally with very short hair and very tight T-shirts. He clearly wasn’t ready to admit his true nature yet, but whether he maintained the pretence only to others or if he was also lying to himself, I wasn’t sure.

‘Okay, rules for the new topic,’ I said, placing two full pints and three more bags of crisps on the table. ‘Has to be something vague and not even nearly connected to me or my love life.’
Or yours.

‘Right,’ Terry said, pausing for a moment. ‘If you were legally obliged to kill five people, who would they be?’

‘From history or now?’

‘Now. No one famous either, just people you know personally.’

As I wandered the two miles home that night, accepting the rain pouring between the back of my neck and the collar of my cheap white shirt as just punishment for spending my last tenner on tequila instead of a taxi, I remembered Terry’s comment about not asking about the last, or first, time I fell in love.

The first time was easy; too easy, in fact.

The Basement had been my favourite mid-week haunt

for months before I started working there. I, and a few other futureless idiots who didn’t think attending lectures and seminars was all that important, used to head down to The Basement at least three times a week to get
blootered
. It’s a funny thing about student life – no matter how skint we were, we could always scrape together enough coppers for another pint of snakebite and black (if we were flush and had forgotten that brain cells are important, we’d throw in a
Pernod
and call it a red-witch).

The Basement was aptly if obviously named. A steep set of concrete stairs ran from street level down to the, well,
basement
, of a swanky office building in
Glasgow
city centre. Even on an eye-burning summer’s afternoon it felt like the middle of the night by the time you reached the bottom of those stairs. Once you pulled open the creaking oak door this impression was bolstered by dull, orange lighting and a ceiling Danny
Devito
could have clattered his head off with a decent jump. Everything was made of wood – deeply-stained, chipped, generally knackered-looking wood. The floor, the tables and chairs, the bar itself and the wobbly barstools facing it were all identically mahogany-hued. Even some of the staff had grainy skin and a plank-like demeanour, although that may just have been the lighting.

The day I finally admitted that a Business Studies degree was unattainable and even less desirable, I marched straight from the college to The Basement and practically demanded (with pleading) a job. Luckily the manager, Sammy, knew me fairly well by that point. Even more luckily, he had that very day sacked one of his full-timers for ‘arsing around with the no-sale button’ (which I later discovered meant omitting to ring drinks through the till and pocketing the cash). He gave me a job on the spot.

Paula Fraser already worked there. She was part-time though and only worked weekends, so I’d been making a merry tit of myself for five days before we met.

‘Pint of Moosehead, mate,’ some swine said at
six o’clock
on the Friday, nodding towards the tap that had become my mortal enemy.

Moosehead was a Canadian lager whose claim to fame was that it was ‘double-cooled’. This was supposed to provide the aspiring alcoholic with an ice-cold beverage experience to match no other. In reality, it provided the punter with a ten-minute wait as the poor sod pouring it (i.e. me) battled the excessive foam spurting and farting from the tap. It was a right bastard, even for the staff who knew what they were doing.

As my face was being sprayed with CO2 propelled yeasty bubbles for the umpteenth time in five minutes a girl so gorgeous it was scary brushed past me, clearly trying not to laugh as she opened the wooden door beside the till that led into the tiny office/cloak-room/staff-room/skive-area.

It’s a cliché to say I had to rub my eyes, unsure of the veracity of the angelic vision I’d just witnessed. In this case though, it was true. By the time I cleared the bulk of the sticky, stinging, bloody-freezing Canadian gold from my lids, she was back out of the office and behind the bar. And looking at me.

‘Jim? I’m Paula. Welcome to the crypt. I hope you remembered to abandon all hope before you signed on,’ she said, with a smile that made me wobble.

‘Hah, yeah,
hiya
. I’m Jim,’ I said hastily and, on reflection, unnecessarily. I thrust out a hand to shake hers. However, my vision was still limited thanks to the recent beer-bath my eyes had received and this, coupled with the distraction of some fuckwit shouting at me for another pint of Moosehead, led me to misjudge spectacularly the distance between us. Instead of exchanging a polite greeting with this Venus, I shoved my right hand into her left breast, with a reasonable amount of conviction.

I like to think it was more shock than pain that led to Paula taking a speedy step backwards as I cried: ‘Holy Christ bollocks shit sorry!’

To her credit Paula laughed, sort of, as she set about having very little to do with me for the rest of the shift. She did, however, have time for everyone else, staff and customers alike. It amazed me the way she was able to maintain her smile and her temper no matter how frantic the place got or how offensive the drunken advances from some of the punters became. With a lean forward and a few softly spoken words, she calmed even the most belligerent of complaining customers. And she looked
happy
throughout it all. She was the first (and possibly the last) person I ever knew who actually
enjoyed
their job.

The one benefit to come out of my blurred vision was that I got to view Paula in an, albeit painful and irritating, halo of soft-focus.

She was only an inch or two shorter than me, which put her at around 5’7 or so. She had a big, long, curly, brown perm (it was the early nineties, remember), and, in all honesty, the nicest bum any ogler could wish for - her skin-tight faux lizard-skin jeans helped there. Her eyes were hazel, her teeth were white, her nose was cute and her skin was somehow both pale and full of life. She smiled at everyone (not so much me, that night), and had an aura of joy and, I’m not joking, unadulterated
goodness
about her that I had never come close to witnessing in anyone before. Thanks to me her bust was probably a touch on the sore side, but it looked fabulous. She was, without doubt, the most attractive person I had ever punched.

By the end of the shift I’d served God-knows how many customers, wrangled twelve more pints of Moosehead, developed a new and surprisingly intimate relationship with the glass-washing machine, and said not another word to Paula Fraser. Plus I was bloody knackered.