Read Secrets of a Soprano Online

Secrets of a Soprano 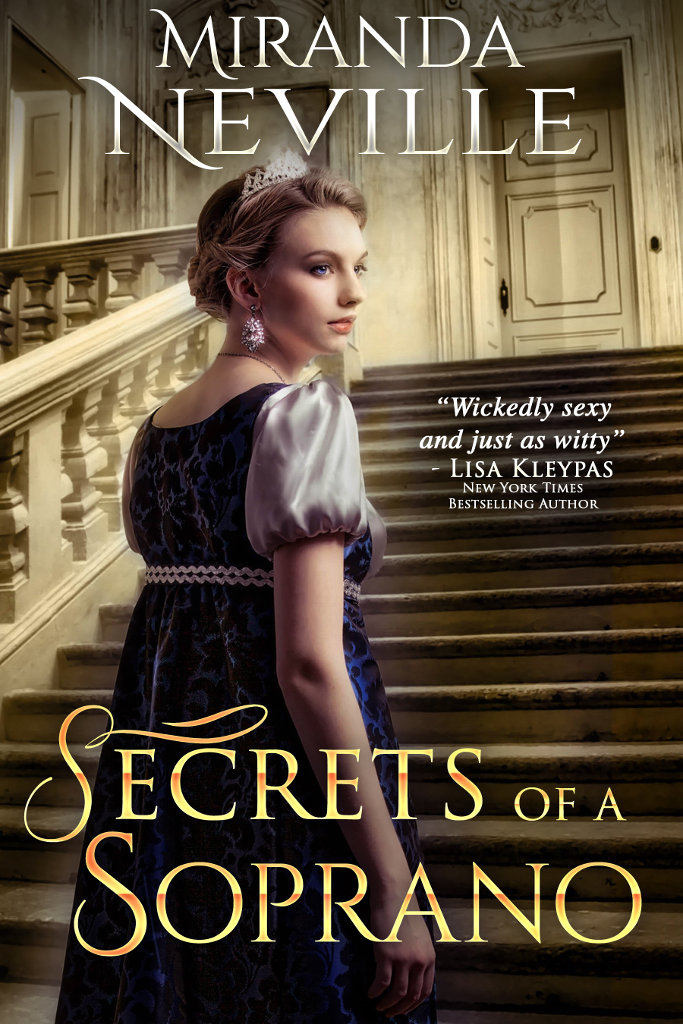 Secrets of a Soprano

All rights reserved. No part of this book may be reproduced in any form or by any electronic or mechanical means including information storage and retrieval systems—except in the case of brief quotations or excerpts for the purpose of critical reviews or articles—without permission in writing from Miranda Neville, author and publisher of the work.

To all my friends and relations who have shared opera performances with me, especially my father. I miss you, Papa.

About Secrets of a Soprano

ABOUT SECRETS OF A SOPRANO

Teresa Foscari, Europe’s most famous opera singer comes to London to make a fresh start and find her long lost English family. Her peerless voice thrills everyone—except Maximilian Hawthorne, Viscount Allerton, the wealthy owner of a rival opera house. Notorious Teresa Foscari is none other than Tessa, the innocent girl who broke his youthful heart.

Amidst backstage intrigue and the sumptuous soirées of fashionable London, the couple’s rivalry explodes in bitter accusations and smashed china. Tessa must fight for her career—and resist her burning attraction to the man who wishes to destroy her.

“O Love, give me remedy

For my pain, for my sighs!

Either return my love to me

The Marriage of Figaro, Act II

T
he plaintive notes
of the aria faded, and a profound hush fell over the theater. It took a lot to silence the carousing in the pit or the gossip of the
haut ton
in the boxes, but the new soprano had managed it. Then the audience erupted into rapturous applause such as Max had never heard in his long career as an operagoer. But then he’d never experienced such a heart-wrenching musical performance as this rendition of Mozart’s reverie on lost love.

Over the years, as Maximilian Hawthorne, and more recently as Viscount Allerton, he had seen and heard many great singers and known them intimately, too. But Teresa Foscari reached inside his chest and squeezed the breath from his lungs. She stirred his emotions as only one other singer had done.

Foscari was not
her
. She couldn’t be.

The theme of the aria and the genius of the singer had evoked long-forgotten suffering at love betrayed, that was all. He pushed back a churning brew of bitterness and yearning and forced himself to judge the performer objectively.

She was good, La Foscari. Better than good. A vocal artist without peer as well as a consummate actress. And there lay the problem, immediate, practical, and nothing to do with the sorrows of his youth. He lowered his opera glasses and turned to his companion in the box at the Tavistock Theatre, London’s principal—for the present—home of the operatic arts.

“We’re ruined.” Simon Lindo, not a man given to excessive emotion, shook his lightly grizzled head in dismay. Lindo’s sentiments were aroused not by vocal virtuosity but by mundane mercenary considerations. “We’re destroyed,” he continued, lowering his forehead onto the upholstered railing of the box. “No one will come to the Regent while Foscari is here. That snake Mortimer will sell out every performance this season.”

“Careful, Simon,” Max said. “You don’t want Mortimer to see you looking desperate. You can be sure he knows we’re here.”

Lindo raised his head and composed his features lest Bartholomew Mortimer, the lessee and manager of the Tavistock Theatre, should note the consternation on the face of his former employee and present rival.

It took a lot to upset Simon, whose years in the theatrical business had given him nerves of steel and a philosophical acceptance of adversity. But circumstances tonight justified his agitation. Lindo had sunk every penny he possessed into the brand-new Regent Opera House.

Max’s anxiety was almost as great. While the loss of his own investment in the Regent would hardly leave a dent in his income, he’d poured time and energy into the venture beyond what might be expected of an aristocratic patron. Pride and ambition were at stake. His peers, many of whom swelled the packed house for Foscari’s opening night, regarded his venture into the theatrical business as an eccentricity made acceptable only by his exalted social position. He cared for their opinion—a little. A great deal more important was the achievement of his goal: bringing truly great opera to London.

He looked back at the stage where Teresa Foscari, known throughout Europe as La Divina, was taking her bow.

She was a glorious sight. Max knew heavy stage makeup and an elaborate powdered wig could disguise imperfections of face. But experience told him the sumptuous blue satin panniered gown of Mozart’s Countess contained a figure worthy of the gods. No costumier’s artifice could create that slender waist and magnificent bosom. The only drawback was that her allure shattered the verisimilitude of the opera’s plot: no one in their right mind could believe a husband would leave the bed of this stunning creature for another woman. Every male in the audience was gaping at the full breasts, revealed by her low neckline and accentuated as she bowed in regal acknowledgment of their homage.

Not all these men, opera aficionados only by reason of fashion, could appreciate the peerless artistry of her performance, the soaring perfection of her voice. But not one was unaffected by her superb presence. There was no mystery why Teresa Foscari’s fame had streaked like a comet through a dozen countries for the past ten years.

Lindo continued to bemoan their misfortune. “Look at her, Max. The men are going to be after her like flies for honey whenever she appears.” He turned to his friend, his shrewd eyes narrowing. “From the look on your face I’d say you were ready to join them. I’m worried about financial ruin and all you can do is stare at her.”

Max wrenched his eyes from the stage and tried to speak like a man with nothing but business on his mind. “The timing of her arrival in London is unfortunate. But the ladies will come to us. We have Edouard Delorme and he’s as handsome as sin.”

“You know a soprano always trumps a tenor,” Lindo retorted.

“We have a soprano. An English one.”

Miss Lucinda Johnston possessed a lovely voice and had achieved great success in the provinces and some in London. But her face, to put it kindly, was reminiscent of a bulldog. A refined, handsome, well-bred bulldog, Max told himself optimistically, likely to appeal to any patriotic Englishman.

And most unlikely to make even the most dog-loving squire forget Teresa Foscari’s obvious charms.

“One swallow doesn’t make a summer,” said Lindo, taking over the role of comforter since Max had relapsed into gloomy silence. “And the rest of Mortimer’s company is dreadful.”

“Before Foscari appeared the evening was a disaster,” Max agreed. “Under-rehearsed and badly sung. Foscari can’t sing every night. With adjustments of our schedule we’ll at least capture the audience when she’s resting.”

“Though Nancy Sturridge is good. I’d have hired her if Mortimer hadn’t promised her the sun and the moon.”

Lindo was right, damn it, as he always was in his judgment of talent. The young woman playing Susanna, the Countess’s maid, was excellent. Max had made overtures to her in a more personal way, until he heard she was on the brink of accepting an offer from the Marquess of Somerville.

But Sturridge, however commendable, didn’t have the magnetism to carry a company on her slender shoulders. Foscari did, the reason Italian newspapers had proclaimed her a goddess. La Divina indeed.

Max’s gaze was irresistibly drawn back to the beauty on stage. “If we had Foscari instead of Johnston our success would be assured.”

Lindo understood him at once. “La Foscari? Steal her you mean? We know Mortimer pays well. And there’s likely a clause or two in her contract that’ll make it hard to get around.”

Max shook off the objections with a casual shrug, not ready to admit any ulterior motive for approaching Teresa Foscari. “Contracts can be broken and I have a greater fortune. I’ll invite her to supper and open negotiations.”

The applause had finally died down and the scene continued. Max didn’t want to miss a single note of it.

“That was even
worse than I’d feared.” Tessa collapsed onto the chaise longue and glanced with disfavor about her dingy dressing room, the best the Tavistock Theatre had to offer but far from her usual standards in either dimensions or comfort. In the auditorium the aged theater retained a semblance of its gilded splendor; backstage the rot showed.

“Thank you, Angela,” she said to her maid who had hurried over to repair her stage makeup in preparation for the third act. Tessa leaned back and closed her eyes.

“The company is bad, to be sure,” her friend and companion Sofie said, “but you were brilliant as ever. It’s going to be another triumph.” Sofie was the Austrian wife of Tessa’s
répétiteur
Sempronio Montelli. Sempronio’s musical coaching might be essential in the maintenance of Tessa’s vocal brilliance, but Sofie’s role as comforter and her constant, if sometimes bracing, support were just as important.

Tessa, who always judged musical performances with resolute honesty, waved a dismissive arm from her supine position. “Perhaps you’re right. But I can’t take any joy in appearing in such an inferior production. I hoped the other singers might rise to the occasion of a public performance, but they’re obviously not capable. Tonight was no better than the rehearsals.”

The door opened and Sempronio walked in. The rehearsal pianist had been watching the opera from the manager’s box.

“I’m sorry,
cara
,” he said, understanding better than Sofie how Tessa felt about the evening’s musical standards. “You were
magnifica
, of course. As for the rest—” He shook the mop of curls that enhanced his resemblance to a middle-aged angel. “Susanna is good.”

“Miss Sturridge sings Susanna well,” Tessa agreed, her genuine admiration for the other soprano mixed with distress. She’d never become accustomed to the jealousy her own gifts aroused in others. “Unfortunately she resents me. She managed to prick me with a pin when we were dressing Cherubino. And she tried to upstage me during the finale.”

“Foolish woman!” Sofie exclaimed. “Upstage La Divina indeed! As though she could! And pricking you was very unprofessional.”

“I’m beginning to think there is little that is professional about the Tavistock Theatre,” Tessa said, sitting up now Angela had completed her task. “What’s this?” She accepted some papers from Sempronio.

Seductive Secrecy (Shadows series) by Mann, Marni
Silent Orchids (The Age of Alandria: Book One) by Wylie, Morgan
The Fifth Season by Korzenko, Julie
First Date- a Novella by Thomas A Watson, Christian Bentulan, Amanda Shore
Everyday Italian by Giada De Laurentiis
HauntedPassion by Tianna Xander
DUTCH AND GINA: A SCANDAL IS BORN by Monroe, Mallory
Whisper Privileges by Dianne Venetta
Life Before Damaged, Vol. 1 by H.M. Ward
The Men of Pride County: The Pretender by West, Rosalyn
Our partner