Read Shadows In the Jungle Online

Shadows In the Jungle 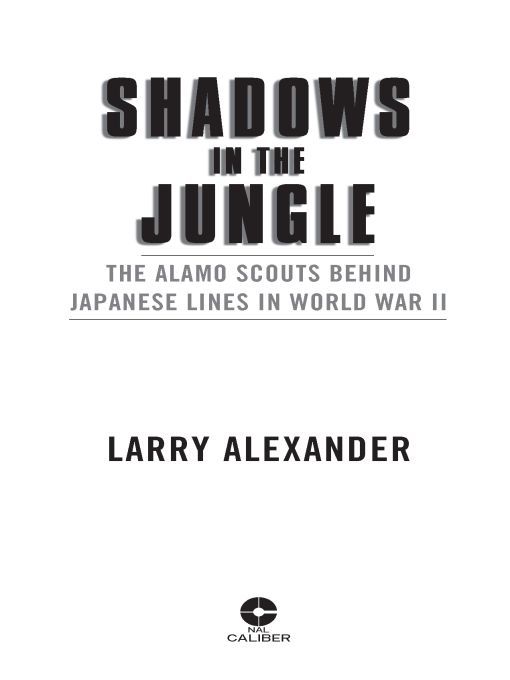 Table of Contents
Â
Title Page
Copyright Page
Dedication
Introduction
Â
CHAPTER 1 - Hollandia: “Looks Like We Walk Home.”
CHAPTER 2 - “I'll Form My Own Intelligence Unit.”
CHAPTER 3 - Recruitment and Training
CHAPTER 4 - The First Mission
CHAPTER 5 - “God Bless You, Brave Soldiers.”
CHAPTER 6 - “. . . The Entire Shoreline Was Ablaze.”
CHAPTER 7 - Final Operations in New Guinea
CHAPTER 8 - “. . . By Far the Best Show I've Ever Seen.”
CHAPTER 9 - The Rescue at Cape Oransbari
CHAPTER 10 - “Maybe We Can Save the World.”
CHAPTER 11 - Samar/Ormoc Bay
CHAPTER 12 - “Only an Act of God Is Going to Get You Out.”
CHAPTER 13 - First In, Last Out
CHAPTER 14 - “If I Don't Make It, It's Up to You.”
CHAPTER 15 - “I Wouldn't Trade the Whole Damned Jap Army for One Alamo Scout.”
CHAPTER 16 - “It Would Have Been Near Suicide.”
Â
EPILOGUE
APPENDIX A - Alamo Scout Team Rosters
APPENDIX B - Glossary of Terms
SELECTED BIBLIOGRAPHY
Acknowledgements
INDEX 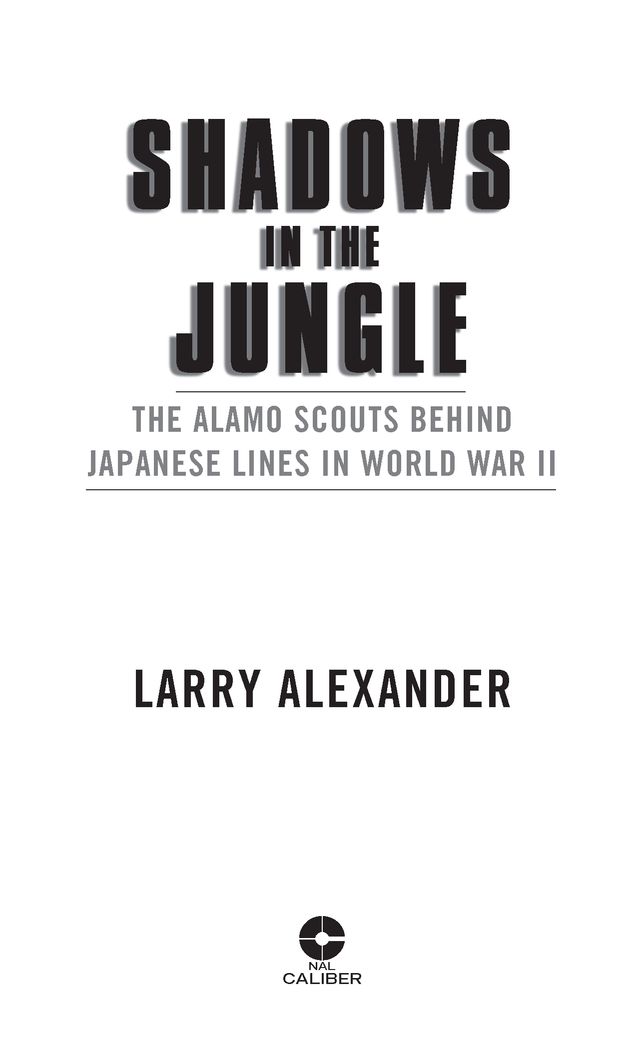 This book is respectfully dedicated to the Alamo Scouts,
unsung heroes of the war in the southwest Pacific.

INTRODUCTION
The Best of the Best
I
n late December 2006, an eighty-five-year-old man left his favorite restaurant and headed for his parked car. He had just enjoyed his dinner of crispy-fried filet of sole, half of which he had eaten and the other half of which the restaurant staff had dutifully wrapped “to go.”
When the elderly man, aided by a cane, arrived at his car, he slipped the key into the passenger-side door lock, opened the door, and placed his doggy bag on the seat. Then he closed the door.
That was when the mugger struck, a hard blow on the right side of the man's head that broke his glasses' frame and cut him above the eye. Somewhat softened by the bill of his baseball-style cap, the blow nonetheless staggered the elderly man. He felt himself falling, but was able to catch himself by bracing his arms on the cane.
Blood clouded the vision in the man's right eye, but from his left he saw his attacker's feet on the sidewalk before him, and in one swift motion he brought the cane up between them. The mugger yelped as the cane connected with his testicles, and he stumbled back. With the advantage now on his side, the old man reversed the cane and, using the curved handle, swung it like a baseball bat against each of the mugger's shins. The cane connected with a resounding crack and the mugger hit the pavement like a felled ox. The old man swung the cane again, this time taking aim on his attacker's knees, and heard the pop of wood striking bone. He delivered another blow to the man's crotch.
By now the mugger was rolling on the ground, howling in pain, his arms shielding his head in anticipation of being hit there. Instead, the elderly man brought the cane down two more times, once to each side of the rib cage, cracking bones with each swing. He then leaned back against his car and waited for the police.
When a female officer arrived, having been called by a witness walking her dog, she took in the scene. Paramedics were tending to a young, tough-looking man writhing in agony on the sidewalk, while at the ambulance another medical worker was bandaging the forehead of the elderly man with the cane. The officer walked up to the victim-turned-victor.
“You did this?” she asked in disbelief, pointing to the thoroughly whipped thug.
“No,” he replied. “My cane did.”
The police officer was obviously surprised, but had she known the old man, her reaction might have been different. For, sixty-two years earlier, the man, a World War II veteran, had been an Alamo Scout, a decorated member of the U.S. Army's smallest elite fighting force, trained not just in the skills of jungle survival, intelligence gathering, and reconnaissance, but to respond automatically and with deadly force when attacked.
The mugger, although he may never know it, had been fortunate.
* * *
It was just after eight a.m. on Wednesday, October 10, 2007, when the taxi rolled up to the main entrance of the Renaissance Hotel in Denver, Colorado. After paying off the cabby, I entered the hotel lobby, where the first thing that greeted my eyes was a table festooned with a red, white, and blue banner proclaiming ALAMO SCOUTS ASSOCIATION.
I smiled. I had arrived.
A little over a year earlier, I had been somewhat in the same shoes as the police officer who responded to the mugging. Like her and many other Americans, I knew little or nothing about the Alamo Scouts. I had come across their name once or twice over the years in the course of my reading but was not really aware of who they were and what they had done.
Now, I had traveled nearly two thousand miles to meet them and get their stories down on tape, for they were to be the subject of my next book.
After the release of
Biggest Brother
, an account of the famed World War II paratrooper Dick Winters, in 2005, I wasn't sure there'd be a “next book.” I had not written
Biggest Brother
as a means of securing a second career as an author. Instead, I had done it as a tribute to the life of a man whose story I felt Americans needed to know.
ADS
15.4Mb size Format: txt, pdf, ePub