Read Skin I'm in, The Online 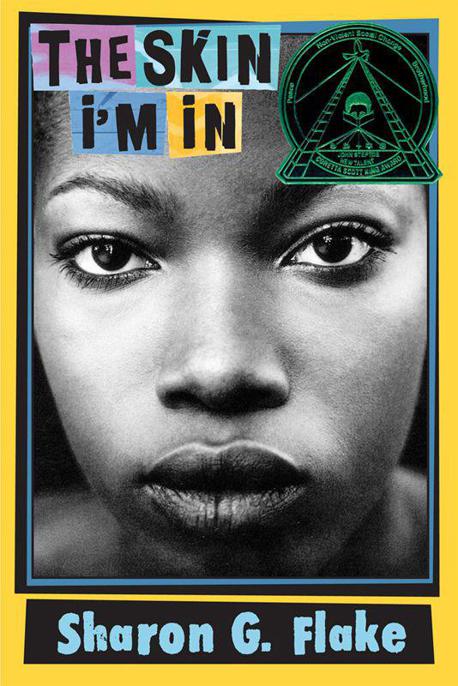 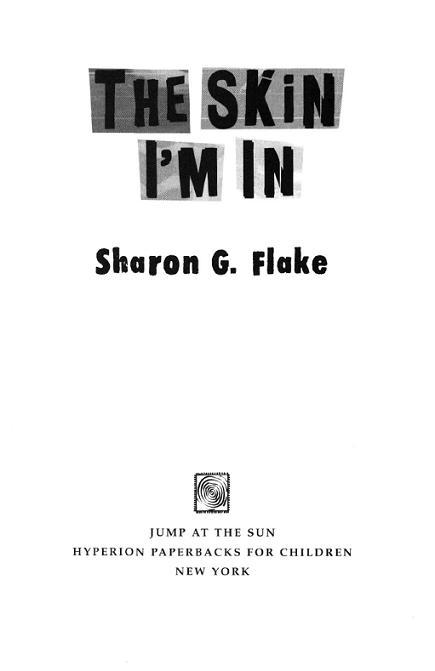 All rights reserved. No part of this book may be reproduced or transmitted in any form or by any means, electronic or mechanical, including photocopying, recording, or by any information storage and retrieval system, without written permission from the publisher. For information address Hyperion Books for Children, 114 Fifth Avenue, New York, New York 10011-5690.

To my daughter Brittney Banks,
my sweet brown beauty.
I love you.
And to my editor,
Andrea Davis Pinkney,
for believing!

Special thanks to
Grampa Titus and Poppop
(James ″Jimmy Sax″ Rosseau),
who had the talent but not the opportunity,
Mom, Dad, Gramma Marie, Uncle Jimmy,
Aunt Betty, and Uncle Sam,
who always knew how to tell a good story.
Thanks, too, to August Wilson and his sister
Freda Ellis, to Highlights for Children, Rob Penny,
Joy Cowley, and Ed and Helen Palascak and the kids.

THE FIRST TIME I SEEN HER
, I got a bad feeling inside. Not like I was in danger or nothing. Just like she was somebody I should stay clear of. To tell the truth, she was a freak like me. The kind of person folks can’t help but tease. That’s bad if you’re a kid like me. It’s worse for a new teacher like her.

Miss Saunders is as different as they come. First off, she got a man’s name, Michael. Now who ever heard of a woman named that? She’s tall and fat like nobody’s business, and she’s got the smallest feet I ever seen. Worse yet, she’s got a giant white stain spread halfway across her face like somebody tossed acid on it or something.

I try not to stare the first day that amazon woman-teacher heads my way. See, I got a way of attracting strange characters. They draw to me like someone stuck a note on my forehead saying, ″losers wanted here.″ Well, I spend a lot of time trying to fit in here at McClenton Middle School. I ain’t letting nobody ruin it for me, especially no teacher.

I didn’t even look up when Miss Saunders came up to me that day like I’m some kind of information center.

″Excuse me,″ she says. She’s wearing a dark purple suit, and a starched white shirt with matching purple buttons. That outfit costs three hundred dollars, easy. ″I’m trying to find the principal’s office. I know it’s around here somewhere. Can you help me?″

Before I catch myself, my eyes ricochet like pin balls, bounding from John-John McIntrye’s beady brown eyes right up to hers. I swallow hard. Stare at her till John-John whacks me on the arm with his rolled-up comic book.

″Thank you. Now what’s your name?″ she says, putting down her briefcase like she’s gonna stay here awhile.

″Don’t let that fancy name fool you,″ John-John butts in. ″She ain’t nobody worth knowing.″

Miss Saunders stares down at him till he turns his head away and starts playing with the buttons on his shirt like some two-year-old.

″Thank you,″ she says, walking off. Then she stops stone still, like some bright idea has just come to her, turns around, and heads back my way. My skin starts to crawl before she even opens her mouth. ″Maleeka, your skin is pretty. Like a blue-black sky after it’s rained and rained,″ she says. Then she smiles and explains how that line comes from a favorite poem of hers. Next thing I know, she’s heading down the hall again like nothing much happened.

Before I know it, three more boys is pointing at me and singing that song, too. Me, I’m wishing the building will collapse on top of me.

John-John McIntyre is the smallest seventh grader in the world. Even fifth graders can see over his head. Sometimes I have a hard time believing he and me are both thirteen. He’s my color, but since second grade
he’s
been teasing
me
about being too black. Last year, when I thought things couldn’t get no worse, he came up with this here song. Now, here this woman comes talking that black stuff. Stirring him up again.

Seems like people been teasing me all my life. If it ain’t about my color, it’s my clothes. Momma makes them by hand. They look it, too—lopsided pockets, stitching forever unraveling. I never know when a collar’s gonna fall off, or a pushpin gonna stick me and make me holler out in class. I stopped worrying about that this year now that Charlese lends me clothes to wear. I stash them in the locker and change into them before first period. I’m like Superman when I get Charlese’s clothes on. I got a new attitude, and my teachers sure don’t like it none.

It’s bad enough that I’m the darkest, worse-dressed thing in school. I’m also the tallest, skinniest thing you ever seen. And people like John-John remind me of it every chance they get. They don’t say nothing about the fact that I’m a math whiz, and can outdo ninth graders when it comes to figuring numbers. Or that I got a good memory and never forget one single, solitary thing I read. They only see what they see, and they don’t seem to like what they see much.

Up till now, I just took it. The name calling. The pushing and shoving and cheating off me. Then last week something happened. I was walking down the hall in one of Char’s dresses, strutting my stuff, looking good. Then Char walked up to me and told me to take off her clothes. There was maybe eight or nine kids around when she said it, too, including Caleb. I thought she was kidding. She wasn’t. So I went to the girls’ room and put my own stuff back on. That’s when I made up my mind. Enough is enough. I deserve better than for people to treat me any old way they want. But saying that is one thing, making it happen is something else.

So you see, I got my own troubles. I don’t need no scar-faced teacher making things worse. But I got this feeling Miss Saunders is gonna mess things up for me real bad.

JOHN-JOHN THINKS HE SMART
. I hear him still singing that boom-boom song under his breath. I don’t have to listen to it, either. So instead of going to fifth period and sitting next to him, I’m going outside. There’s plenty of kids hanging out around the corner at the pretzel place. I just have to get to my locker for my coat and slip out the backdoor. Soon as I get down the hall, though, who do I see but that woman. She’s all up in somebody else’s business already.

″Young lady,″ she says to a girl leaning against the wall with a boy sucking on her neck. ″Get to class.″

I turn to a locker like I’m trying to open it. When the girl turns Miss Saunders’s way, I almost choke on my spit. It’s Charlese. Man, the stuff’s gonna fly now. Charlese stares at Miss Saunders like she’s out of her mind. Then she laughs. I see Miss Saunders, crunching up her face, and cutting her eyes at Worm.

Worm busts out laughing and says, ″Dang, who you? Somebody’s momma?″

″I’m the new English teacher.″ Miss Saunders has got a real attitude when she says it, too.

″Shoot,″ Char says. ″I sure ain’t looking at that face forty-five minutes every day. No way.″

Worm puts his arm round Char’s shoulder. They walk down the hall right past me. ″Dang. What happened to her?″ he whispers. They head for the stairway to keep on locking lips.

″To class or to the office,″ Miss Saunders calls after them real loud and steady.

Charlese looks at Miss Saunders and rolls her eyes.

Miss Saunders has got her hands on her hips. ″You have something to say?″

Big mistake, lady, I’m thinking. Charlese is the baddest thing in this school. She ain’t gonna forgive you for loud-talking to her.

Charlese, she’s crazylike. Next thing I know, she’s telling Miss Saunders to mind her own business. She says something about her face. Worm’s telling Char to cool it. He’s dragging her down the hall with his hand covering her big mouth. The new teacher don’t know when to quit. She tells Worm to hold on a minute. Then she says her piece. She’s letting Charlese know that she’s traveled all over the world, and there’s nothing Charlese can say about her face that she ain’t heard in at least four different languages.

Char says, ″If you’re so high and mighty, what’re you doing in a dump like this?″

Miss Saunders puts down her briefcase. When she does, her Gucci watch flashes. This lady’s got money. Big-time cash.

″I want to give something back,″ Miss Saunders says.

″You want to give something back?″ Charlese asks, putting out her hand. ″Good. You can start by giving me them designer shoes and that three-hundred-dollar watch you got on.″

Charlese, she’s got an eye for the good stuff. Her older sister Juju, who’s been taking care of Char since their parents died two years back, has got all kinds of stuff at her house. Most of it still got price tags on it. She’ll sell you a three-hundred dollar-pants suit for fifty dollars, or a nice coat for a Benjamin—a hundred bucks. Good deals if you got the dollars, which I ain’t. Char’s lucky. When my daddy died three years ago, Momma took to her sewing machine to help her ease the pain. I sure wish she’d taken to getting me clothes off a store rack, instead. Her sewing is a shame.