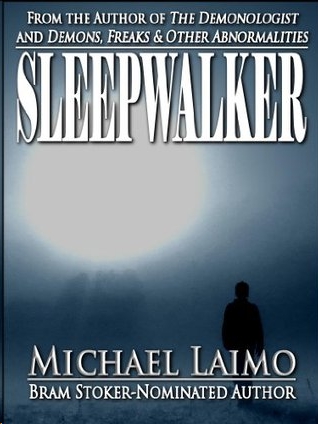 If you're reading this book and did not purchase it, or it was not purchased for your use only, then you should return the vendor of your choice and purchase your own copy.

OTHER CROSSROAD TITLES BY MICHAEL LAIMO:

Demons, Freaks, and Other Abnormalities

Buy Direct From Crossroad Press & Save

Try any title from CROSSROAD PRESS – use the Coupon Code FIRSTBOOK for a onetime 20% savings!

We have a wide variety of eBook and Audiobook titles available.

They were disengaging dreams, odd haphazard images having no discernible intent or direction. He remembered how they started, peculiar blotches of color shifting and floating into geometrical patterns, then ultimately bursting like colorful fireworks displays. At some point during these earliest dreams his ever-present conscience reminded him,
You are Richard
Sparke
, and you are dreaming
, but that had been a long time ago. Lucid dreaming, he later discovered through the counseling of Dr Marcus Delaney, was the correct terminology for this strange nocturnal awareness.

Later his dreams became more vivid, blossoming into a blue light that metamorphosed into more distinguishable episodes, and he had seen in his mind’s eye entire scenes including the faces and bodies of people he knew, and many more individuals he recognized in mere passing during his awake state.
That’s Dr Delaney
, his conscience pointed out.
And Pamela, your girlfriend. What a doll. She looks real good, even here in your dreams. And didn’t you see that tall dark man somewhere before? And look, there’s Tom…he’s your old boss, the principal from Michael P. Slater Elementary School where you once taught third grade.

And with these impressive dreams came visions of sadness. Julia, his mother, visiting him in several episodes, standing alone in the room, away from the bed at some indiscriminate spot and begging for her only son’s comforting hand. And then, Debra. His daughter. She’d come to visit on a number of occasions too but had remained mostly silent, merely pouting and crying and twirling her blonde locks as though lost and unable to find her way home.
They’re both dead
, Richard reminded himself each time after waking.
Passed on long before the dreams came.

Richard opened his eyes. Saw nothing. Felt only the thin cool sheets of the bed and a sheen of sweat dampening his face and back. The darkness was complete around him. He peered about, eyes wide and struggling to distinguish if he were presently immersed in the landscape of a dream-world, or if the gloomy vista surrounding him was forged by the
unilluminated
walls of his bedroom in the waking world. He could sense the soft pressure of the mattress against his back, and when he dropped his hands from his waist he could feel the comforting texture of the sheets. He turned over onto his side with very little effort.
This could be a dream, there is no paralysis. You feel weightless. Yet your mind functions with the confidence and authority of being awake. So which is it? Are you awake, Richard? Or sleeping? Which is it?

He was unable to answer the question, for at this instant Richard
Sparke’s
current state of semi-awareness slipped away. Still, he somehow knew, that regardless if awake or dreaming, he still lay in bed. And that was a good thing.

At some point thereafter, Richard became semi-conscious again, and beheld the blue light. It appeared as a solitary source, muted, as if cloaked behind a vapory cloud of fog. He wiggled a foot free of the sheets and held it up towards the hazy luster, stretching his toes out to see if he could touch it. He couldn’t. It was too far away.

He could see that the blue light was acting differently--it was transmitting its radiance to levels much brighter than ever before, eating through the hazy occlusion like the sun burning away a thin layer of clouds following a thunderstorm. He put his hands up to shield his eyes, but could see only the near-black silhouette of his fingers. No details came into view other than the partially blinding circle of light itself. He looked away, closed his eyes, then pressed his fingers back down against the mattress. He made an attempt to prop himself up but could not muster the strength to move.
That’s it then, you must be dreaming. Or, then again, are you? Could this be another episode of sleep paralysis? Is it possible that the man in black is coming back for you after all? My dear Richard, why is it so confusing for you to distinguish between the waking and sleeping state?
His breathing moved quickly, the sound of it racing like wind through his inner ears. He could feel his heart rate performing at an increased level. As if coerced from the rapid pressure in his body, his mind became more alert, and his conscience reminded him of the sad events that took place before going to bed late last night.
Pamela was here. The two of you argued. She said she needed a break, wanted time apart, time to herself. You cried, didn’t you? Begged her like an unfed dog for another chance. But she left without an answer for you. She was very confused and couldn’t make up her mind. She said she would see you in the morning.

Is it morning yet?

How long have you been sleeping, Richard?

He heard a slight noise in the room, a knocking, soft and muffled like a hand against a pillow. It seemed to generate from within the shadowed walls. The blue light at the foot of the bed faded slightly and once again he was bathed in semi-darkness.

At first the soft voice sounded as if it had emerged from his dream--a distant unseen echo filtering in from somewhere behind the scenes. But then he heard his name being repeated over and over again, “
Richard...Richard...Richard...”
and he came awake with a start, eyes fluttering in fearful expectation.

Anxiety blooming, he writhed in bed, the sheets gathering about his waist and thighs. His heavy breathing seared his lungs. Perspiration doused his skin. A wave of apprehension raced through him like an injection of vaccine from a doctor’s needle; he couldn’t help but be terrified--yet strangely seduced--by the familiar voice sharing the room with him.

The gentle beckon of his dead mother.

When he opened his eyes she was there, only inches from the edge of the bed, standing closer than ever before. She was wearing her favorite dress, the one she’d been buried in, the soft turquoise linen faded into drab gray threads, gauzy webs swathing her shoulders like a tattered shawl. Her skin was gaunt, carved with wrinkles, pasty lumps of age-old make-up caking her shrunken jowls.

Richard took a slow deep breath--a weak yet serious attempt to quell his mounting panic. It didn’t work, and wouldn’t if he tried again, the harsh grinding of his heart keeping him well aware of that. Staring at Julia
Sparke
, his dear mother, his conscience reminded him,
she’s never come so close, Richard. She looks so...so real
.

She reached out to him, hands withered to mere skin and bone.

“Is it morning yet? Is it, Mother?” he whispered softly.
If indeed it is morning
, Richard’s conscience interjected,
then you’re finally dead and Mother has come to take you away into the blue light, to the place she now stays. The miraculous place she hints to you about time and time again in these incredible dreams. About the place where you belong, Richard...

Julia
Sparke
spoke, interrupting the voice of his conscience. Her voice was soft, floating like a thin wisp of smoke:

“There is a place, Richard, a place where the grass is always green and the trees are full of color. Here in this place there is no pain, only the pleasures of life. I pray for you to come join me, my son, so that we can be together again just like we once were, so that we may partake together all the wonders and joys this world has to offer.”

“Mother,” Richard asked the apparition, “is Debra in this place you speak of?”

The tiny bit of luster in them faded sharply to a gray monotone, devoid of life, perhaps even sight. They rolled up into her sockets, revealing only bland whites. Her wrinkled lips spread open and from within a gargled shriek sputtered forth. Richard pulled his hand back as if suddenly shocked with electricity, watching with gross fascination as the blue light developed behind Julia, growing from a tiny pinpoint near her right ear to a full aura ensconcing her entire fragile body. A breeze sprung up, sending shivers across Richard’s spine, drying his dampened brow. A faint whistling noise filled the air.

Then from within the cool blue brilliance dark blotches appeared at either sides of her. They danced, spread open, and from within these pulsating circles ghostly human hands emerged, carrying their own source of white luminescence as they entered Richard’s world. A total of four hands to the wrists, they flexed and wriggled their fingers, as though testing the air for oxygen, continuing for a few seconds until stopping all at once like a video in freeze-frame. Roughly, they grasped Julia’s body, by her arms, her legs, her neck, pulling her back into the blue light from which they--and she--first appeared. In an attempt to scream, her jaw fell open, hanging like a dresser drawer suddenly free from its tracks. Only silence spilled forth.

This must be another vivid dream! This can’t be happening!
He cowered against the headboard of the bed, bit his fist and squeezed his eyes, teeth clenching as he sucked in harsh breaths. He held his arms around his shoulders, bathing himself in the darkness of his closed eyelids until a normal state of indifference came back, his breathing somewhat regular, his blood once again flowing smoothly through his veins.

Richard opened his eyes. Darkness met his trying gaze. Everything had vanished. The light, the hands, his mother. All was quiet, silence dominating the gloom as if nothing had ever occurred. He glanced nervously about the room, looking for his mother, for the hands, the light. Perhaps they’d moved someplace else? He shot glances about the dark room, into the hallway, the bathroom.

He listened for noises. Anything at all. Voices in the room. Footsteps elsewhere in the condo.

He cried out in fearful response to the new voice sharing the room with him, clutched his racing heart, eyes darting crazily about, climbing the walls. A high-pitched yelp answered his shout--that of a woman caught in surprise.

He tried to take a deep breath but found it difficult to grasp any air.

He bolted upright in bed, sweat dousing his face. Strips of daylight filtered in through the blinds on the left window, thrusting thin white swords onto the damp sheets. He was confused, unable to locate the source of the voice--if it had indeed existed. Suspiciously, he peered around the room. His surroundings. The furniture. The unmoving ceiling fan. The whole scene, although daunting at the moment, was still a familiar one: a sudden and rather welcome reprieve to the darkness of the nightmare he hoped to have left behind.

The Immigrants by Fast, Howard.
The Three Christs of Ypsilanti by Milton Rokeach
Foreigners by Caryl Phillips
Down and Dirty (Sons of Sinners Book 1) by Erika Reed
She's the One: COunting on Love, Book 1 by Erin Nicholas
Inconsolable by Ainslie Paton
No Choice but Seduction by Johanna Lindsey
The Writer and the World by V.S. Naipaul
Small-Town Redemption by Andrews, Beth
El pirata Garrapata by Juan Muñoz Martín
Our partner