Read Smoke from This Altar (1990) Online 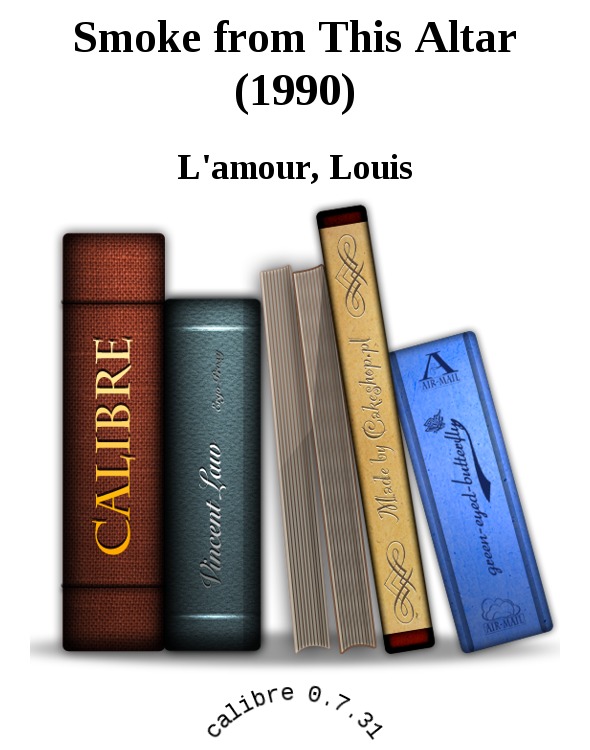 Smoke From This Altar

Out of the Ocean Depths Soundlessly Moving

Smoke From This Altar

To Cleone: In Budapest

An Ember In The Dark

A Handful of Stars

Love Out of Season

In An Old Temple

The Sea, Off Vanua Levu

If There Is Beauty

Ship Across The Sky

I Came To Create

Lines To a Season

I Shall Go Back

I Haven't Read Gone With The Wind

A Wail From a Pulpeteer

Call Of The Tropics

To One Without Faith

The first book Louis purchased for his own library was The Standard Book of British and American Verse. It was published in 1932 and much used and loved. It is still in our library, now in its second binding. Louis' love of poetry and the English language was so strong and important in his life that it carried him through many dangerous and lonely days. At the time, poetry was the expression of Louis' most important thoughts and feelings. It was the first manner in which he wrote about his life, his views and the places he had seen. Some of these poems got published in various newspapers and magazines, and though he made only a few dollars from these sales, they gave him the optimism to keep writing.

One of his most encouraging moments came in 1936, when he received a letter from George Riley Hall, the editor of the
Daily Free-Lance, about his poem, "Banked Fires," which had just been published in the Daily Oklahoman.

A section of the letter read: ". . . The poem is exquisite. . . . The craftsmanship shows the master workman. . . . The imagery is all one could ask. The treatment is skilled. The sentiment one that will appeal to millions. There is one line that is worthy of the old masters-'The arching of a dream across the years.' A gifted writer might produce a whole volume and not write a line like that."

Louis returned to the United States in the late nineteen thirties, after years at sea. He moved in with his parents on a small farm near Choctaw, Oklahoma, that Parker, his brother, had bought for them a few years before. He was thirty years old, and knew that if he was ever going to make something of himself as a writer he had better get started. He began writing short story after short story but they almost always were rejected. I think that he must have felt very tempted to leave again, to go back to the kind of life he had lived before he settled down and forced himself to think about his future. You can feel that wanderlust calling to him in his poems, "I'm a Stranger Here," "Words From a Wanderer," and "I Shall Go Back." He even wrote about putting his old life behind him and facing his future in "Let Me Forget," the poem that he used to close the Yondering collection.

Earlier, he had taken a few stabs at poetry. In the beginning he didn't even know about rhyme and meter. A friend who read some of his attempts in the late twenties told him that "it didn't scan." He had no idea what she was talking about, but being Louis, hack to the library he went to read and reread Wordsworth, Browning, Tennyson, Frost, and Service, to discover just what it was that made a great poem.

During his travels he would occasionally compose poems, and it always seemed remarkable to me that he could both create and then remember them without writing them down; it seemed as if he could never forget a line or even a word. Louis explained that before the development of writing, poetry was one of the tricks ancient people used to remember stories. The rhyme and meter of each line would help you to remember the next. Because of this, poems that told a story, like those of Robert Service, were very popular with the hobos and sailors of his day. They were men with few possessions, some even illiterate, and so they were, in a way, like those ancient people who carried their literature in their heads.

One night in a ship's foc'stle, Louis had been trying to work out a particularly romantic poem when several of the other seamen began to tease him about only being able to write "love-stuff." After several hours of work he presented them with "My Three Friends," proving that he indeed had other talents.

When we first began dating, Louis gave me a copy of Smoke From This Altar, and through it I began to learn a little about the man who would become my husband and the father of our children. Many of the poems are about what he saw and thought and felt while he was in China and the South Pacific; others are about places he visited that we went back to together. We drove out to Secret Pass, the subject of a poem in this book, just after we got married. If I remember correctly, it is on the old Hardyville stage road outside of Kingman, Arizona. "Biography In Stone" was written about an outcropping of rock that Louis thought looked slightly like a man; he had become fascinated by it when he was a young man working at the Katherine Mine in the same area. "Enchanted Mesa" was written sixty years ago about what he saw when he first came through the area just west of where we now have our ranch.

Because he was having little luck with his other writing, Louis decided that he would collect the best of
his poetry into a book. He hoped that publishing it would bring him some attention and prestige. A small Oklahoma City publishing company finally agreed to release Smoke From This Altar in 1939. Although not very many copies were sold, the book was well reviewed. Kenneth Kaufman, editor of the book page for the Daily Oklahoman, wrote, "What struck me first was his delight in and love for words; and what struck me next was his industry. He has that infinite capacity for taking pains, which Carlyle, I believe it was, gave as a definition of genius. And he has the ability to take punishment which only a trained fighter (which he is, along with all his other accomplishments) could stand. By which I mean to imply that he will be heard from in a big way one of these days. . . . For he has the three things which it takes to make a writer: a love for words, industry, and something to say."

Because of Smoke From This Altar,
Louis was able to move into a different phase as a writer. He began to receive requests to speak, read his poetry, and autograph. He had published his first book, and it served to move his career along. About the same time a few of his short stories sold and he was on his way as a writer of note.

I've decided to add a few poems that weren't in the original Smoke From This Altar.
Some are humorous, some light verse, and some serious and thoughtful. I hope you enjoy them.

SMOKE
FROM THIS
ALTAR

OUT OF THE OCEAN DEPTHS SOUNDLESSLY MOVING

Out of the ocean depths soundlessly moving
Up from the violet unblossoming sea; Out of the vastness

that strangely disturbing, Troubles my heart

Out of the distance

that holds me enchanted, Up from the green,

shifting violence below
A voice from the twilight, the beauty, the stillness, A voice that comes calling and calling to go.

Out of the purple along the horizon,

Up from the endless unchallenged beyond
A call that comes whispering, softly, enduring Of ways to go wandering, seas so alluring.

Out of the ocean depths soundlessly moving
Up from my memories disturbing and deep; A spirit that urges me

A dreaming that haunts me awake and asleep.

Nothing has life more beautiful than ships Nothing with half their white-winged majesty, Nothing the fancy captures, roving free,

Can equal cloud-crowned masts or prow that dips Into the waves . . . no sight can this eclipse . . . For here has man put wings across the sea, Harnessed the winds to labor, daringly,

Challenged the gods with brine upon his lips.

Give us this beauty that will conquer power,

Give us this strength that will defy the fates . . The creak of wind-whipped rigging for an hour And splendor of the sails . . . this expiates; Give us this glory . . . we must not forget, That man is noble, too, in silhouette.

The harbor lights are shining from the quay Like golden daggers in the heart of night; I stand below the lonely anchor light

And watch the sleeping city down the hay; The world about is faint and far away A thing of understanding more than sight, And with the dawn, like some enchanted rite, It rises from the mist to meet the day.

The shades of night have set their sombre sail And fled before the crimson scythe of dawn; The stars go out, like candles in a gale

And leave a scene some artist might have drawn, Of ships aflame and spires in golden mail That hesitates a moment and is gone.

Smoke From This Altar (1990)
WORDS FROM A WANDERER

dusk have trapped the ending day,

When webs of shadow snare the filtered gleams; I only know how dim the pathway seems And how the dust from many roads of gray, Has sunk into my heart and made me pay With tears and loneliness for these few dreams.

I do not know the way the hearth-light hums Nor how the kiss of childish lips may feel,

I only know the way the mad sea churns

And how the blowing spray, like hits of steel, Can tear like savage teeth, and rip from me, These last reluctant hopes, and leave me free.

TO CLEONE: IN BUDAPEST

You were so sure your warmth and love would hold And you did not think of the trade wind's whine, Nor could you know the lands I'd known of old, Or that the paths you knew were never mine.

You did not guess the curse of common things, Or that the bonds of love could ever chafe; You thought the eagle's firmly pinioned wings Were bound so very close that love was safe;

And then one night when stars were soft and clear, Like harbor lights in some strange port of calling

dropped my off-shore lines and harbor gear, And sailed away to sea and left it all.

If I, between two suns, should go away, No voice would lift to ask another why, No word would question my retreat, nor sigh, Nor wonder why I'd chosen not to stay; For I'm a stranger here, of other clay;

A guest within this house, a passerby
A roving life whose theme has been "Goodbye"

A shadow on the road, a thing astray.

The Persuasion of Molly O'Flaherty by Sierra Simone
The Book by M. Clifford
Spyforce Revealed by Deborah Abela
Bitter Gold Hearts by Glen Cook
All She Ever Wanted by Lynn Austin
Dawn of the Zombie Knights by Adam Wallace
Decorum by Kaaren Christopherson
Emily Kimelman - Sydney Rye 03 - Insatiable by Emily Kimelman
In Seconds by Brenda Novak
The Paris Vendetta by Steve Berry
Our partner