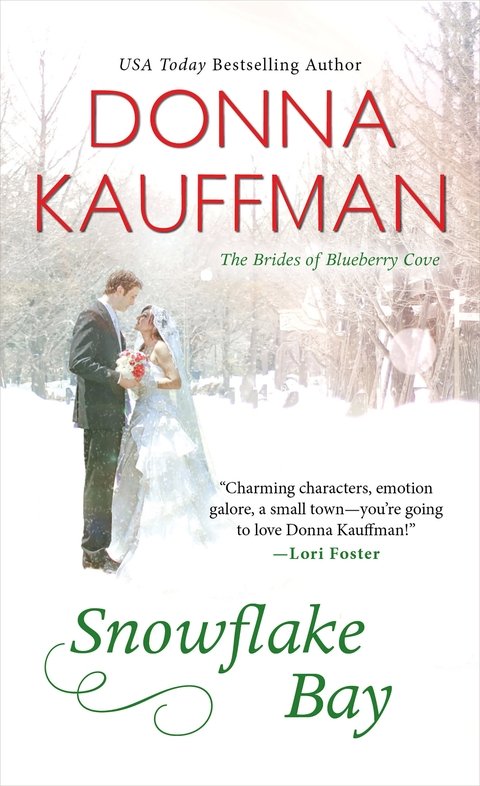 HE TUGGED HER CLOSE UNTIL SHE WAS FLUSH UP AGAINST HIM
“Ben!” she squeaked, sounding alarmed.
“Shh,” he said, and lowered his head.
“Please, don't,” she said, her voice ragged. But it was the glassy sheen in her eyes that stopped him.
His mouth still hovering a whisper above hers, he looked into her eyes. “Just a taste, Fi,” he said, his gaze dipping to her mouth, then back to her eyes.
The glassy sheen shifted to a sparkling flash, deep in those shattered, topaz-colored eyes of hers. How had he never noticed how stunning they were?
“I don't want yourâ”
“This isn't that,” he said. “This isn't about the past. This is about right now.”
Also by Bestselling Author Donna Kauffman
Â
THE SUGAR COOKIE SWEETHEART SWAP
HERE COMES TROUBLE
A GREAT KISSER
TO ALL A GOOD NIGHT
LET ME IN
Â
The Bachelors of Blueberry Cove Series
PELICAN POINT
HALF MOON HARBOR
SANDPIPER ISLAND
Â
The Brides of Blueberry Cove Series
SEA GLASS SUNRISE
Â
Cupcake Club Series
SUGAR RUSH
SWEET STUFF
BABYCAKES
HONEY PIE
Â
Hot Scot Trilogy
SOME LIKE IT SCOT
OFF KILTER
“Santa in a Kilt” in UNWRAPPED
Â
Hamilton Series
“Naughty & Nice” in THE NAUGHTY LIST
“Lock, Stock & Jingle Bells” in KISSING SANTA CLAUS
“Unleashed” in TO ALL A GOOD NIGHT
Â
Unholy Trinity Series
THE BLACK SHEEP AND THE ENGLISH ROSE
THE BLACK SHEEP AND THE HIDDEN BEAUTY
THE BLACK SHEEP AND THE PRINCESS
Â
The Chisholm Brothers Series
THE GREAT SCOT
BAD BOYS IN KILTS
Â
Men of Rogues Hollow Series
MERRY CHRISTMAS, BABY
CATCH ME IF YOU CAN
BAD BOYS, NEXT EXIT
JINGLE BELL ROCK
BAD BOYS ON BOARD
I LOVE BAD BOYS
Â
Published by Kensington Publishing Corporation
Snowflake Bay
DONNA KAUFFMAN