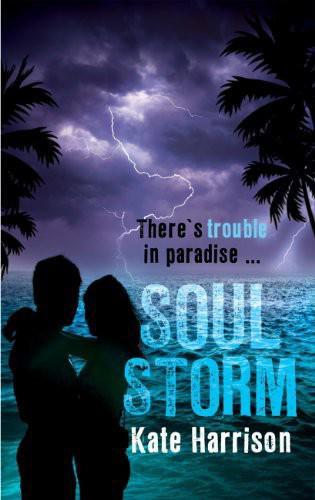 To Amber, for believing in the Beach and helping to make it even stormier . . .

Loneliness is worse than death.

It rots you from the inside out, making you disappear. I avoid mirrors, because I am afraid I will see a space where I should be. And when I accidentally catch a glimpse
of my reflection in a window, I am surprised at how solid I look. How ‘normal’.

All that keeps me going is the knowledge that, one day soon, the loneliness will end. When I confide in the right person, I know I will finally be
understood.

Now, I think of what happened to Meggie as a dress rehearsal. I didn’t remember my lines, or the right time to exit. It was a failure on my part that meant Meggie
and I both suffered more than necessary.

Yet the lessons I learned from Meggie will benefit her sister – how bittersweet is that?

This time, I will get it right. I can only hope that Alice is intelligent enough to understand her role. To realise it is in her interests to be
understanding.

I think she’s following me. Again.

I check the mirror. Nothing. Signal. Move into the kerb, then pull the handbrake, hard.

Check the mirror once more.
Where is she hiding?

My instructor is smiling. ‘The test should be a doddle, Alice. You’ve good motor control, and your hazard awareness is excellent for someone of your age. When I taught your sister,
she seemed oblivious to the rest of the world . . .’

He stops, blushing all the way across the dome of his bald head.

‘It’s OK,’ I say. ‘I don’t mind it when people talk about her. We don’t have to pretend she never existed.’

He takes a deep breath. ‘Of course. I just meant – well, you have the makings of a very safe driver, Alice. Confident, but observant, too.’

I won’t tell him that I love driving because it gives me eyes in the back of my head, and a hard shell of metal to protect me. And because the car lets me cover more ground than I could
ever hope to on foot.

‘Thanks, Mr Gregory. So – next Monday, eleven thirty. My date with fate.’

He nods. ‘You’ve got some practice drives set up this weekend?’

‘Don’t pick up any bad habits between now and then. Hopefully you should be on the road on your own by Monday afternoon.’

‘Thanks.’ I’m about to climb out of the car when I see something in the rear-view mirror. It’s hot, even for July, and the street is busy with sunburned shoppers, but
I’m certain that
was
her.

Well, as certain as I can be.

‘Alice? Time to let go of the reins now.’ He taps the steering wheel and I release the seatbelt, bracing myself to leave the one place I feel in control. ‘You can’t wait
to be in the driving seat full-time, can you?’

I fake a smile. When I step out, the pavement feels spongy under my feet, and goosebumps ripple across my skin, even though the sun is scorching hot.

Out here, I am completely exposed.

I look for her wiry body, straw-coloured hair, pale face. If she
was
following me, she’s found a way to disappear. Town shouldn’t be this busy on a Thursday afternoon, but
the pavements are full of people shopping for their holidays.

A skateboarder misses me by millimetres after I step right in front of him.

He’s already gone, the death-head design on his t-shirt getting smaller and smaller.

I try to slow my breathing, think straight. Why would she follow me? I’ll be seeing her on Sunday; she’s always got another visit planned, whether I want to see her or not. So
there’s no logical reason for her to snoop on me.

But logic can’t explain that feeling of darkness. The same one I felt in my sister’s old uni room, and on the smoky streets of Barcelona, and at Tim’s inquest.

Two girls I half recognise from school are busking on the street corner. They smile at me, and I smile back. As I pass, they exchange glances with each other. I know what people think of me.
Yeah, Meggie’s death was a tragedy, but the word on the school corridor is that I should have got over it by now.

If only they knew how hard I’ve tried to move on. But the visit on Sunday isn’t a
choice.
It’s not like I
want
to hang out with someone I suspect of killing
two people, and almost murdering a third.

Of course what I’m doing could be dangerous. Stupid. No one sane would willingly get close to a potential psychopath. But how else can I get justice for the people I’ve lost? First,
my sister, murdered in a way that the entire world agreed was motivated by possessiveness or jealousy. Then her boyfriend, Tim, killed in a staged suicide attempt that had everyone fooled except me
and his closest friend, Zoe. And where is Zoe now? She’s in a coma, after an ‘accident’ in Barcelona that no one witnessed.

The world has accepted that everything was wrapped up by Tim’s ‘suicide’. That he was responsible for my sister’s murder. So why can’t I let it lie?

Because my gut tells me my stalker’s guilty, just as it convinces me she’s tracking me like prey right now, when she should be studying twenty miles away.

It wouldn’t be the first time she’s done it. Last week, as I ate my lunch alone on the far side of the playing field, that same icy sensation spread through me, the feeling of being
watched. But I dismissed it as paranoia: till I walked straight into her outside the school gates, three hours later. She blushed, insisting she was ‘just passing’.

Since then, I’ve realised I
must
listen to my instincts. And my instincts say that only one person knows the truth about my sister’s death.

Warm rain starts the second the final bell goes, but that doesn’t stop Cara racing out into the playground, throwing off her jumper and dancing like a banshee.

‘Seven weeks of FREEDOM! Seven weeks of boys, beaches and . . .’ she tries to think of a third ‘b’ and then a huge grin transforms her face, ‘BOOZE!’

I laugh. ‘Yeah. I reckon you’ll come back from the Caribbean looking like a piña colada.’

‘I hope I’ll be browner than that. More like a rum punch.’ Cara’s mum has arranged a bonding holiday for the two of them at a health spa in Bermuda. I give it twelve
hours before they’re screaming at each other. ‘You could still come, you know.’

‘Mum and Dad aren’t exactly keen on me leaving the country. Not after Barcelona.’

Cara stops dancing. Her blouse has gone transparent in the rain, and the lads from the boys’ school opposite are pointing. ‘But they’re happy to let you hang out with Sahara
and Ade, the gruesome twosome?’

‘Er, four weeks ago you thought he was a sex god.’

‘You should see a doctor about your memory, Cara.’ Before we went to Spain, she drooled over his pale Scandinavian looks and planned to steal him from Sahara, even though he’d
been dating her for years.

Cara smiles. ‘OK. Maybe I did think he was averagely hot. But that was before I realised that he and Sahara deserve each other.’

Like everyone else, she believes what happened to Zoe in Barcelona was accidental. But now she associates Ade and Sahara with our ordeal at the hospital, and the police interrogation, and our
awful encounter with Zoe’s devastated parents.

Thank goodness. Avoiding Sahara and Ade will keep her safe. I couldn’t forgive myself if something happened to
Cara
too.

‘I’ll give them your love when I see them on Sunday then, shall I?’

Cara groans. ‘Jeez, Alice, why are
you
still hanging out with them?’

‘I need the driving practice. And they’ve got a car.’

‘Yeah, and three points for speeding even though you’ve been driving less than a month. I don’t think I should be taking lessons from you.’

She laughs, but only for a second. ‘Promise me – once you pass your test, you’ll stop seeing them?’

There’s nothing I’d rather do than ignore their endless calls and texts, and consign the two of them to the past.

But I’m getting closer. Once I’ve made sure the world knows what Sahara did, it’ll be over, for good.

It’s what I want more than anything . . . though it will come at a price. Because if . . . no,
when
I’ve finally got justice for Meggie – and Tim and Zoe –
I’m scared I’ll lose the most precious thing in my life. Time on Soul Beach with my sister, and the boy I love.

‘It’s nearly over,’ I say. I long to confide in her, but the few times I’ve hinted at my suspicions, she’s always got that worried look.

Even now, she is watching me closely, her brow furrowed. ‘It’s over already, hon. Tim’s inquest made it absolutely clear. He killed himself because he couldn’t live with
the guilt after killing your sister. But you’ve got your whole life ahead of you and you need to make the most of it. Especially after what happened to Zoe . . .’

She tuts, not believing me. I think she’s about to say something else, but then she shakes her head and begins to run, heading for the river.

I run, too. Once we get as far as the bench that overlooks the lock, she reaches into her bag and pulls out two party bottles of champagne, shakes them and gives one to me.

When we pop the corks, most of the sticky fizz spills out onto the riverbank. She groans, but I’m relieved; I need to keep a clear head at the moment.

Cara knocks her bottle against mine, then swigs. ‘Cheers, honey. Hey, when’s Lewis back from San Francisco?’

Quiet Walks the Tiger by Heather Graham
The Sixth Wife: The Story of Katherine Parr by Jean Plaidy
Dog Lived (and So Will I) by Rhyne, Teresa J.
Por quién doblan las campanas by Ernest Hemingway
This Love's Not for Sale by Ella Dominguez
Lightless by C.A. Higgins
The Aviator's Wife by Melanie Benjamin
GAMBLING ON LOVE (Travis Series) by Kimberley Reeves
Hive by Tim Curran
Legacy of the Highlands by Harriet Schultz
Our partner