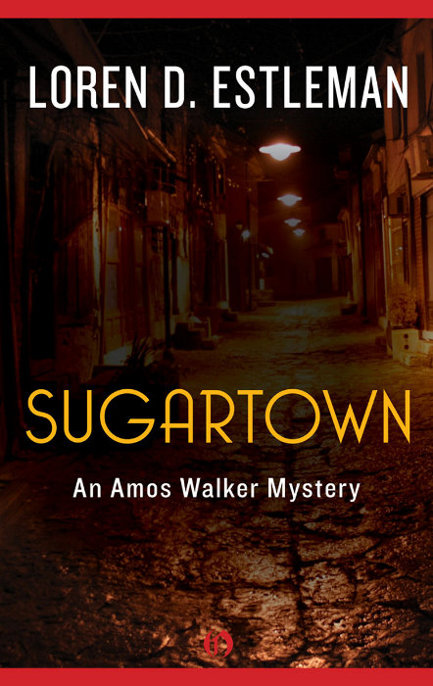 This one is for Carole.

A Biography of Loren D. Estleman

S
HE WAS A VERY OLD WOMAN
dressed entirely in black, and when she fumbled open my inner office door the aluminum tubing of the walker she was leaning on gleamed like nickel steel against the black of her dress. I got up from behind the desk to hold the door open against the pressure of the pneumatic closer. She nodded her thanks with that jerky impatience that the very old share with the very young — the poised complacency of age is a myth — but she made no comment, concentrating on the involved business of setting the rubber feet down on the rug and toddling forward and then picking up the feet and setting them down again. Her breath came sibilantly through her nostrils, but apart from that and the way the cords on the side of her neck stood out like telephone cables under her skin, she showed nothing of the strain it took to cross that six feet to the chair on the client’s side of the desk.

When she was sitting she closed her eyes and breathed. I walked around the desk and lowered myself into the swivel-squawker and waited while the quarter-size fever spots high on her cheeks faded into their ivory background and her narrow flat chest stopped galloping under the plain black material. I’m very good at waiting, it’s the first thing they ask you about when you put in for your investigator’s ticket.

I had a nice day for it. It was May, I had the blinds up and the window raised, and three stories below, the cars gliding past on West Grand River caught the sun on their windshields and chrome and the sweetish smell of warm pavement took the bite out of the auto exhaust. Even the horns sounded content. The first decent day of spring will do that, even in a place like Detroit. Pigeons roosted on the window ledges of the apartment house across the way, looking like small animated gargoyles rehearsing for another remake of
The Hunchback of Notre Dame
. Two hours earlier I had been fooling around with the thought of closing up and driving out into the country when the telephone rang and a Polish accent named Martha Evancek asked me if I was for hire. That’s as close as I get, the thought.

“You didn’t have to make the trip, Mrs. Evancek.” I leaned on the second syllable and used a crisp
ch
on the last part, the way she had over the telephone. “I do house calls.”

She shook her head. “Everyone tries to save me steps. I must have exercise.”

Same voice, same accent. Her face was long and narrow under a black pillbox with a short black veil that hung like Spanish moss to the hump of her thick curved nose, but behind it you could see her heavy lids in the hollows of her eyesockets and below it the deep lines where her cheeks had fallen in. Her hair was very thick, very white, brushed back from her forehead and pinned at the nape of her neck. Fifty years ago it would have tumbled in rich dark waves to her shoulders and had the young Polish blades doing cartwheels to get their fingers in it. At first glance her face had a patrician look; at second glance it was just old. The hands in her lap were blunt and red with skin flaking off the backs. The skin was well scrubbed but there was black dirt older than I was in the creases of her knuckles. There was a thick plain gold band on the third finger of her left hand and a startling red ruby in an antique setting on the corresponding finger of her right. It went with that hand like a silk dress in a steel washtub. There was much to learn about Martha Evancek.

“You are Mr. Amos Walker?” she asked.

I said I was. She said, “I picked your name out of the telephone directory. You are the only private investigator listed whose residence is in Hamtramck. That’s why I chose you.”

“Not precisely Hamtramck,” I corrected. “But I’m so close it might as well be. The boundaries around Detroit are as vague as the mayor’s morals.”

She made a quick gesture with the hand wearing the ruby that made me feel stupid for even bringing up the subject. “I thought that since you live in a Polish community you might be sympathetic. Are you Polish, Mr. Walker?”

That wasn’t the answer she was looking for, but I watched her think it over and decide it didn’t matter. Once someone has made an appointment to see an investigator and then kept it, he either goes ahead or gives up the idea entirely. He rarely shops around. It usually takes everything he has to make the trip the first time.

In her case it took more.

She watched me, the hollows in her cheeks working, sucking at her teeth. I’d glimpsed them when she spoke, white and even as aluminum siding and just as natural. She had sharp dark eyes under the heavy lids. Old people almost always do. Anyone who equates great age with innocence has never looked into an old person’s eyes.

“How old are you?” she asked finally.

“Coming up on thirty-four.”

“That is very young.”

“Not from this side, Mrs. Evancek.”

“It is from this one.” She might have smiled, tugging the pleating out of her lips briefly. “Your display advertisement in the telephone directory said you look for people who are lost.”

I nodded. “I do other things, but most of my business comes from that.” It being most of nothing for almost a month, which was why I was sitting there being watched by those sharp dark eyes instead of out picking marsh marigolds.

“I want to hire you to look for my grandson,” she said.

I found a pencil and opened my notebook to a page without doodles. “How long has he been missing?”

For no special reason, that rocked me harder than the part about the nineteen years. But I fished the pack out of my shirt pocket and shook out a couple and let her take one and slid the other into the permanent groove in the corner of my mouth and lit them both. She held hers between the second and third fingers of her left hand and filled her mouth with smoke and brought the cigarette away with her lips pressed tight and inhaled. Very little smoke curled back out.

“The doctor says I should not do this since the stroke,” she said. “I broke my ankle last year and he said I should not smoke then.”

I smiled and slid the big glass ashtray between us and dropped some ash onto the picture of Grand Traverse Bay in the base. I had never been to Traverse City. The ashtray had come with the office and the rest of the furniture. She went on.

“I have been in this country only two years. My husband and I came over when the troubles started in Poland. That was his excuse, but I waited seventeen years to come over and learn what became of our little Michael.”

“Your English is very good.”

“Thank you. For six years I was maid to an American businessman and his family living in Cracaw. My husband was head chef in one of the largest restaurants there. But the dishes he made were not popular here and all he could get was a job waiting tables in St. Clair Shores, where we lived and where I am still living. It took something out of him. I scrubbed floors and dusted to help us live until this happened.” She indicated the walker standing like a big chromium bug next to her chair. “Michael — my husband, our grandson was named for him — died last December. I had sold most of my grandmother’s jewelry to pay our way to America, and I had to sell the rest to bury him. This is all that’s left.” The ruby caught the light as she waggled that finger.

“Your grandmother didn’t get that scrubbing floors.”

“She was related distantly to the old ruling family of Poland. When I was a little girl I would sneak into my mother’s bedroom and put on the jewelry and pretend I was a princess. Funny little-girl dreams.”

I gave up trying to picture her as a little girl and snicked some more ash into the tray. “Your grandson.”

“Yes. The business of living, as you call it here, got in the way of our search, but we never forgot our reason for coming. The Hamtramck police were very polite and let us look at their records, but most of them were not there during the time we were interested in, and they could not afford to reopen a case so old.”

“I will come to that soon. Our son Joseph came here thirty-two years ago to go to work for the Chrysler Motors Corporation. His father and I stayed behind. No one from either side of our family had ever gone away from Poland. A year later Joseph married an American girl, Jeanine, and bought a house in Hamtramck. The house is still standing, though it is one of those to be torn down for the new plant General Motors wants to build there. They had two children, Michael and a daughter, Carla. I never saw them. Joseph was always going to visit us but he never found the time or the money and we could not afford the trip short of selling my grandmother’s jewelry, which at that time I did not want to do.”

I watched her take one last careful drag, her hand covering the lower half of her face, and squash the butt in the bay. The hand shook a little. I’d figured her for eighty when she came in but she could have been older. She kept on screwing the stub long after it was out.

“Nineteen years ago this month,” she said, “Joseph was let go from his job. He wrote that the Dodge plant was cutting back on personnel, but we found out later he was fired for coming to work drunk and sometimes not coming to work at all.

“For eight weeks he looked for another job, then gave up. On a hot day late in July he got into an argument with Jeanine over his refusal to look for work. He was drunk. The neighbors heard them shouting at each other. Then he went into another room and brought back the shotgun he went deer hunting with in the winter. They heard that too.”

She abandoned the shredded butt finally and sat back, looking at me with her sharp dark eyes.

After a long moment I got rid of my own cigarette. It was starting to burn my fingers.

A
YELLOW OBLONG OF SUNLIGHT
draped over one corner of the desk slid off and landed on the floor without a noise. The horns down in the street sounded less content now. I’d have bet the pigeons had flown off too. I turned to a fresh page in my notebook.